10 Things You Didn't Know About Your Camera

As digital SLR cameras become more and more popular, features that used to reserved for professionals are now available to everyone. More and more technology is being squeezed into our cameras. You don't need to use every feature on your camera for every photo, but when you're struggling with a certain effect or situation, chances are there's a setting or mode that can make your job a lot easier. Here's ten examples of helpful features you might not know about!

Bracketing is a technical term commonly used for HDR, where three to five photos are taken in succession at different exposures you can set. Typically, from there you’re able to then load the photos into your preferred HDR tone mapping software. However, you’re also able to use this feature to get multiple exposures of the same image and manually increase your dynamic range.

Another popular use of bracketing is to ensure you get a proper expose. In fact, this is why it was initially introduced. You can take several photos in a row all at varying exposures, and you're almost guaranteed to get one that's perfect.

The standard setting for most camera systems is that when you press the shutter button down halfway, your camera will automatically focus. This is a great solution, but many people prefer the alternative, which is known as back button focus. Personally, I’ve found that by using the ‘AF On’ button on the back of the camera to focus with my thumb, I’m able to steady my camera better, and reduce motion blur at slower shutter speeds. Other photographers have reported the same.

Typically, back button focus can be set on all modern DSLRs from the major manufacturers. Be sure to check with the manual as to how to enable this setting and give it a try. You may find that it helps produce sharper images, by simply adjusting how you hold your camera while shooting.

When shooting in RAW, the Picture Style on your camera doesn’t really matter, as all the data will be scrubbed when loaded into the computer in it’s RAW format. Traditionally, the picture style (where you can change the saturation, brightness, contrast and more in-camera) only applies to the JPEG format of the file, so while the image may be black and white in-camera, it will restore it’s color when loaded into the computer with its RAW file format.

One of the newest features manufacturers have started adding to cameras is a built-in HDR function. It not only has a bracketing function, but also combines the exposures and makes a finished image. While I’m personally not much of a HDR fan, architectural photographers have found a very practical use for this tool, especially when they need to get clean photos to their client on a short deadline.

This feature goes back to the days of film. The double exposure settings allows you to expose two images on the same frame. When done correctly, it can create some really interesting and beautiful results. While this technique can be simulated in Adobe Photoshop and other image editing software, it's sometimes easier to do it on the scene, as you'd be able to trial and error it while on location. It also creates surprising results, that you may not have tried to create Photoshop.

One of the most impressive advancements to modern DSLRs has been the improvements with focusing systems built into the camera. With modern cameras, you're able to use a variety of focusing mode. AI servo on Canon cameras (AF-C on Nikon cameras) can be set up to track a moving subject.

The Canon 5D Mark III has advanced it's focusing system so much from previous versions that they have a large portion of the menu dedicated to various focusing modes. While many of these are redundant for the average photographer, these systems have revolutionized sports and action photography. Whereas before, the spray and pray tactic was common, photographers are now able to use precision in their photographs, and not have to worry about focusing issues.

Each camera has it's own unique focusing system, so again, it's encouraged to refer to your manual for a full explanation on how your camera's focusing systems work. For a broader look into how autofocus works on a technical level, you should check out Matthew Zhang's brilliant explanation here.

Certainly, you've probably heard the terms back focusing or front focusing before. Over time, a lens will start to lose its focus a little bit, and begin focusing slightly in front of or behind your subject. This is a naturally occurrence with lenses, which is why after a few years of heavy use, lenses are encouraged to be sent in for cleaning and calibration.

Within the last couple years, camera manufacturers have added a feature into some models that allows you to calibrate them yourself, without the need to send them in. In reality, it's nothing more than a bypass, and doesn't actually change the lens or fix it. By finding how much your lens is back focusing or front focusing, the camera can automatically compensate for that prior to taking the photograph.

This feature can be complicated to setup and use, but functions incredibly well when used correctly. There are various techniques and software that can help you with the calibration of your lenses, but often, you'll need a calibration chart to help measure the differences. It's recommended that you calibrate your lenses regularly, especially if you find some of your lenses are off when shot wide open.

It's never recommended that you delete images on your card using your camera. With that said, it's not too uncommon for me personally to start shooting on a near full card, only to have to go through frantically to delete the old images off of my card. When doing this quickly, it's not uncommon to accidentally delete some photos you may not have wanted to.

This can all be prevented using the image lock feature. The system is simple. You can't delete anything that you've locked. This feature often goes unnoticed, but can be a complete life saver.

Generally, this feature can be enabled in the image viewing settings of your camera. Some cameras even have a dedicated button you can press during playback.

Perhaps the unsung hero of my Canon 5D Mark III is the rate feature. The feature is brilliant when used correctly. When viewing photos on the camera, the rate button allows you to rate images on a 1-5 star system, which is then saved into the metadata of the file. When the images are uploaded into Lightroom or another editing system, the images will retain that rating and be displayed on your computer. This is incredibly handy when you'd like your clients or team to pick their favorite photos while on set.

At this point in time, this feature is only available on the newest Canon camera bodies, but should be making its way to others soon.

If your camera has a built-in flash, it's likely that it also has some flash settings as well. Perhaps the most practical setting, aside from adjusting the power, is rear curtain sync. This setting makes your flash fire right before the end of the exposure instead of at the beginning of it.

You can use this setting in conjunction with a slow shutter speed to show the motion of the subject. The shutter will open and expose the ambient light, then the flash will freeze the last moment of action so it is not blurry. This technique is commonly used in action and sports photography.

Hopefully, you've learned about some features on your camera that you didn't know about. These days camera manuals can be as thick as a novel. They are daunting. But you if you try to learn a new feature or two each week, you'll be through the whole manual in no time. Leave a comment below if you've found a hidden feature on your camera that helped with your photography. 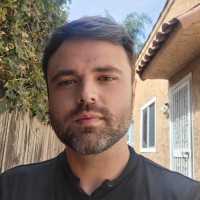 Zach Sutton
Zach Sutton is a freelance commercial photographer and writer from Albuquerque, NM. Aside from writing technical and creative articles about photography, Zach also teaches workshops and gives lectures on the art of photography. When not writing or taking photos, you can usually find Zach at coffee shops, complaining about how much money he spends on coffee.
ZSuttonPhoto
Weekly email summary