As with any valuable skill, the best way to learn photography is to dive in and get some real-life experience. For this reason, I've been basing tutorials on some of my actual client shoots to see what knowledge we can glean from real situations for you to immediately apply in your own daily photography outings.

Recently, we looked at some practical tips from an engagement shoot and will pick up this same format for today's lessons from a family shoot. The family below had an awesome little toddler named Camden who will definitely be taking center stage as our primary learning tool!

Every few weeks, we revisit some of our reader's favorite posts from throughout the history of the site. This tutorial was first published in October of 2010.

With any photo shoot, it's easy to get wrapped up in poses and smiling faces. Though these shots should definitely comprise the bulk of your material, make sure you don't forget to try your hand at some creative cropping techniques.

Shoes and feet are always a good place to start, especially with little kids. Also, while you're at it, make sure to include a point of contrast or a reference for size. The picture below would've been pretty good if it had just been Camden's little shoes but capturing his Dad's matching - but much larger - shoes in the scene transformed the photo into something that elicits an audible "awww" from every Mom who has seen it. 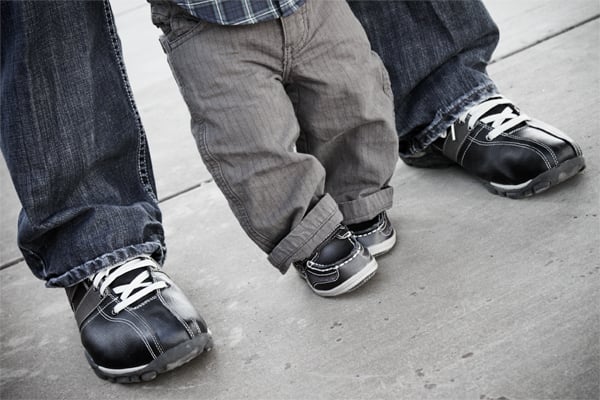 Keep in mind that with children, someone took extra special care to get every little detail and accessory right in their outfit so it's always greatly appreciated when you as a photographer take notice in the form of a few close-up shots. Buttons on coats, hair bows and tiny jewelry are all good targets for a few detail shots.

Obviously, hands are another major area of interest. As evidenced by the most popular crop of Michelangelo's "Creation of Adam," people seem to love hand shots. With hands it's always good to work in some texture, especially in an unexpected way. In the shot below there's quite a visual and mental contrast between the soft pudgy baby hand and the rusty metallic pillar. 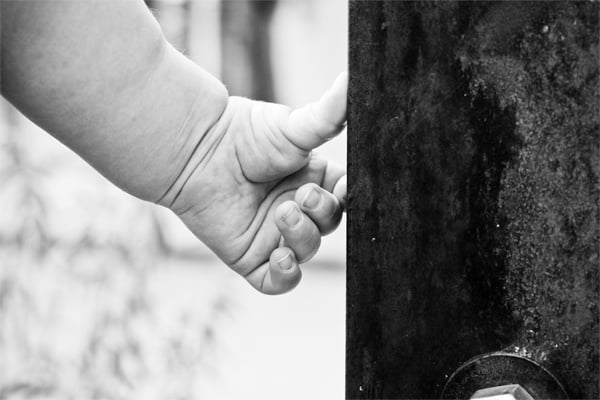 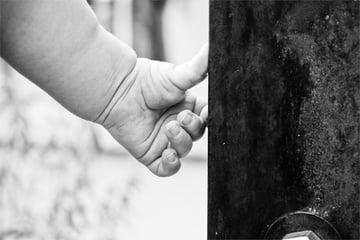 Remember when you're photographing children to actually let them get distracted. Apart from easing the pressure on them, it allows you to really capture their curiosity. They'll constantly reach out and touch materials, colors and textures that they're seeing for the first time, which makes for some awe-filled shots that you could simply never get with an adult.

Lesson 2: Keep Your Finger On the Trigger

As you're wandering around at a given location to mix up your backgrounds and poses, remember that shooting doesn't end while you make the transition from one place to another. These are the moments when your subjects will relax and show who they really are and you want to be ready to capture those genuine interactions.

Obviously, when you throw a toddler into the mix this effect is amplified. You never know when these little tikes are going to do something cute that makes for a better shot than any of the poses you've been trying to force them into. 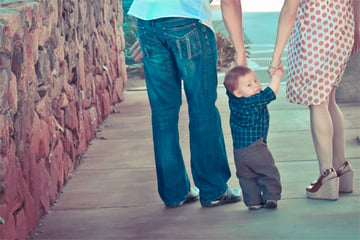 Also, notice how shots like the one above are cropped to bring things down to the level of the child. By focusing up close on the child, even at the expense of cropping out the faces of the adults, the rest of the world seems a bit oversized and we can catch of glimpse of things from their perspective.

Lesson 3: Watch for More Than Smiles

When you're photographing adults, you forget how convenient it is to be dealing with individuals who obey your every command. Tell them to smile, and they smile, it's that easy. With children who are just learning to grasp their first few words, you have no such luxury.

The key to good toddler shots is to roll with the punches. If they insist on making funny faces, don't drop your camera in frustration, just take lots of funny face shots! My absolute favorite photo from the shoot with this particular family is the one below. Camden was lifting one eyebrow, staring into the distance, looking kind of squinty, playing with his ear, and even drooling a little bit; and the result is hilarious! 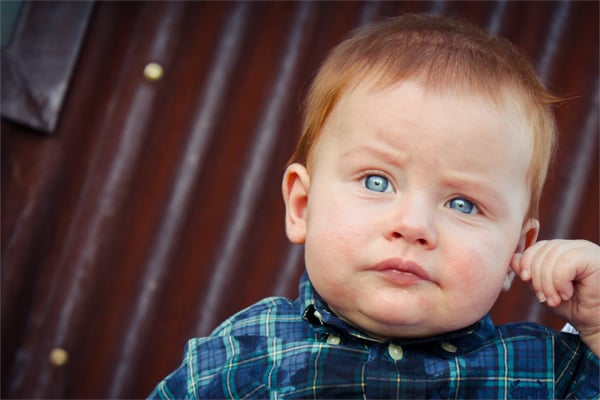 Don't worry about presenting shots like this to a client. Parents love it when you capture the personality of their miniature humans, especially when it's something they see on a daily basis and want to remember when the kid is old enough to ask to borrow the car.

Another awesome opportunity that you won't often see with adults is to get some shots where the child is flat out mad at you. Photo shoots are fun for about 30 seconds for these little guys, after that, you're bound to start seeing very noticeable frustration with you and your silly camera.

Fortunately, when little Cam decided to get grumpy and tired, his parents were awesome enough to join in. This made for a few really funny opportunities. In the photo below (right before we stopped for the day), everyone started empathizing with Cam's feelings. 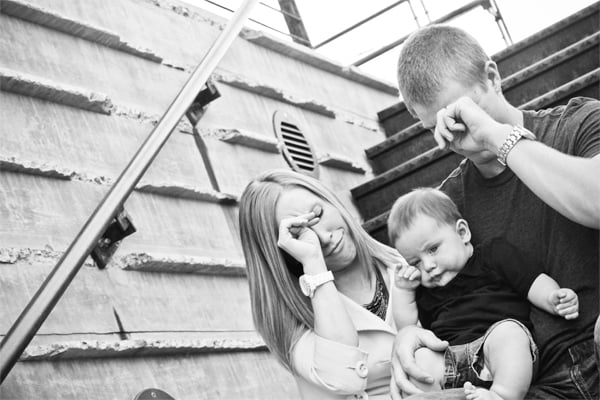 I wish I could take credit for this idea, but it was Camden's mom Moriah who actually suggested it. We brought some chalk to the shoot, found an old wall and wrote his name on it. This made for an awesome personal touch that easily washes off the wall and therefore doesn't do any damage to someone's personal property!

Having this personalized space to play with made for some stellar shots and was a refreshing break away from what you normally see in shopping mall photo studios with cliché block letters spelling out the child's name. 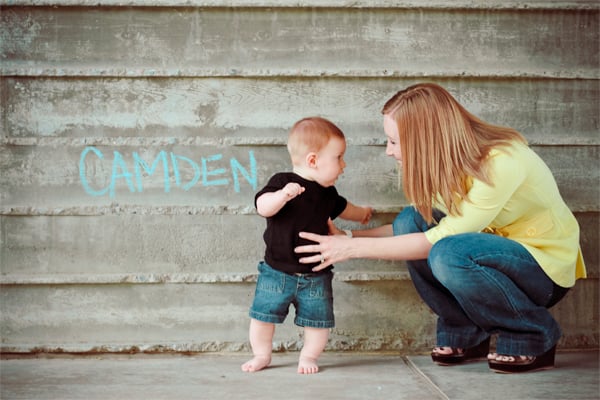 Don't stop at simply writing a few words or names on the wall. Use the chalk to create stars, flowers, dinosaurs and anything else you can think of to create a unique scene that matches the personality of the family you're capturing (we let Moriah handle the drawing and she did an awesome job).

One thing that I definitely learned from this shoot is that, when there's a toddler or baby present, you need to bring some noisemakers, stuffed animals or anything else you can use to capture a few seconds of eye contact. We definitely spent most of the shoot jumping up and down, making silly faces, yelling Cam's name, and all sorts of other actions that made us look crazy to anyone who happened to walk by. Obviously, it was often the case that Cam simply wasn't interested!

One idea we had was to try blowing bubbles. This makes for a great atmosphere and can often be a great tool to capture the attention of little ones. Unfortunately, this was my first time using this technique so I had to learn a few lessons the hard way.

First of all, shooting bubbles isn't as easy at it sounds. You really have to watch your focus and shutter speed. As you can see in the photo above, my bubbles were less than crisp because I was paying more attention to other factors. Secondly, some children are too young to see the magic of bubbles. Though we got a few smiles out of him, for the most part Cam thought the bubbles were a little weird and not all that exciting.

Finally, if you're going to use bubbles in a shoot, bring along one of those little toy guns that shoots out tons of bubbles with zero effort on your part (or get a full on bubble machine). We put Cam's mom off to the side blowing bubbles into the scene and she quickly realized that attempting to blow lots of bubbles at a constant pace is a great way to deprive your body of oxygen.

To help you come up with some great ideas for your next toddler photo shoot, here are a few more shots from the same day. 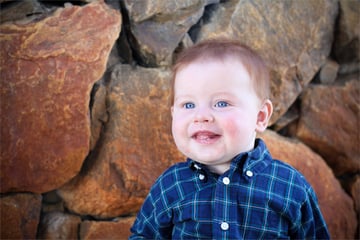 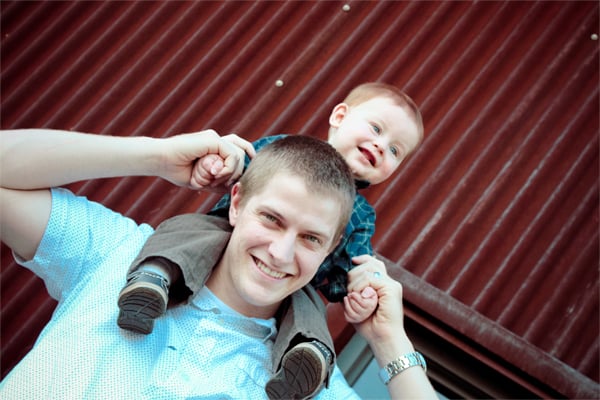 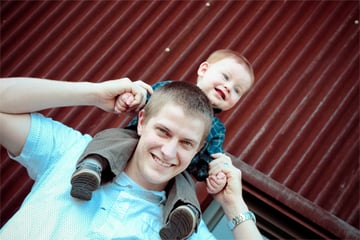 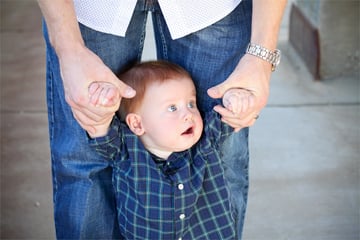 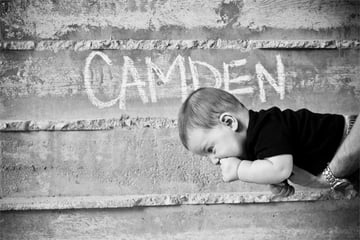 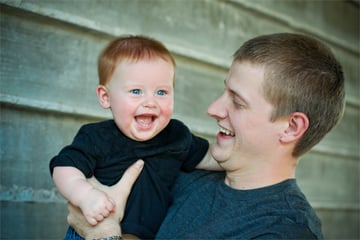 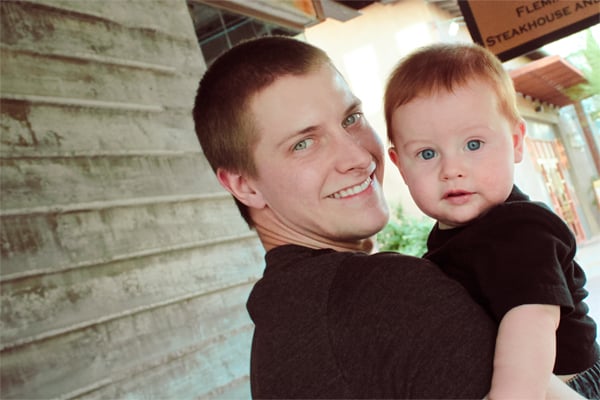 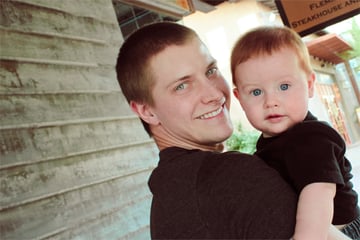 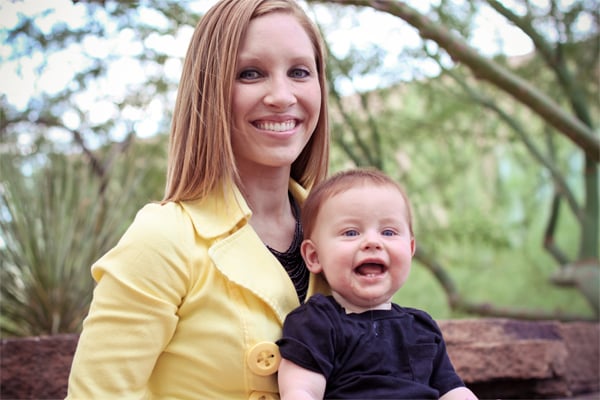 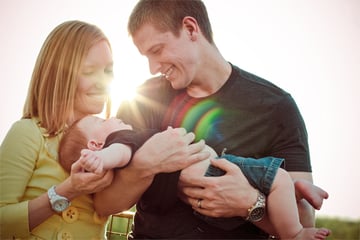 Now that you've seen one of my most recent shoots, show us some of your family photos, especially those with toddlers running around.