With the addition of video to DSLRs, a new market has emerged for high-quality video at a fraction of the historical price. DSLRs, priced about the same as some prosumer video cameras, can accomplish things once off the table for filmmakers. Now, having follow focus and a narrower depth of field are as simple as changing a lens.

With the rise of these cameras, many accessories and elements have arrived on the scene to make the amateur filmmaker's job easier. So, what does it take to make professional video with a DSLR (but without a full movie studio)? Here's some of my equipment recommendations, plus some tips for getting the most out of it.

Sony and Pentax also have cameras that support video capture.

The resolution (720p vs 1080i) and frame rate of video varies by manufacture and even camera. The best Canon camera for video is currently the 7D. On Nikon, the D300s is the best. For the time being, Nikon users are stuck shooting at 720p video, with a lower frame rate and resolution than Canon.

The Canon 7D is the choice of many aspiring professionals and is even being used on many professional shoots for television and film.

Along with using natural light, various continuous lighting sources are available. These range from the high-end (such as Litepanels LED solution) to the cheap end (some work lights from a home improvement store).

There are three common types of lighting instruments, all of which can work in most situations. The big difference is price.

The most commonly used type of lighting for theatre and film, tungsten lights use a filament made of the metal tungsten. This filament burns very hot and produces a lot of light. Tungsten lights come in many shapes and sizes, with a Fresnel being a good starting point for video.

A Fresnel produces a soft beam of light which covers a large area. With tungsten lights, it's easier to control the beam of light.

Budget Recommendation: Cooper/Regent TQS1000 Twin Work Light 1000-Watt and Stand $32 - Can be bought at any hardware store, these lights are cheap and provide lots of light. Can also be used with fluorescent bulbs to save energy.

Recommendation: Arri 650W Fresnel Compact 3-Light Kit $1759 - Includes three lights and a carring case, plus barn doors, stands and filters. With this, you're all set for a shoot! 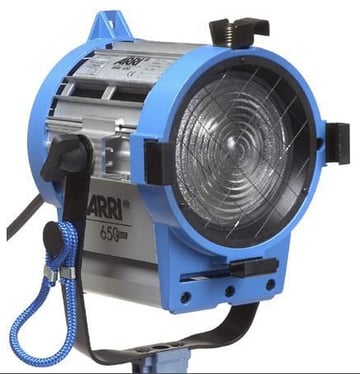 Many starter film light kits include a fluorescent light. Usually, these use multiple bulbs grouped together in a reflector to create light.

The newest and therefore most expensive option, LED lights last longer and use less power while producing the same amount of light. LED lights offer some advantages over tungsten and fluorescent lights. They're cool to the touch and can be easier to transport, plus they have no fragile glass bulbs.

With the proper hardware, you can create the same lighting effects with LEDs as with others. LEDs do require a different white balance setting than regular lighting. LEDs run much cooler in color. Before any shoot, it's a good idea to white balance your camera for them.

Budget Recommendation: LEDs are still fairly new, so there is no budget friendly models on the market yet.

Recommendation: ikan 500 3 Light Kit $1699 - Priced less than LitePanels, these lights put out a good amount and have many controls, plus they have built in barn doors for controlling the light. 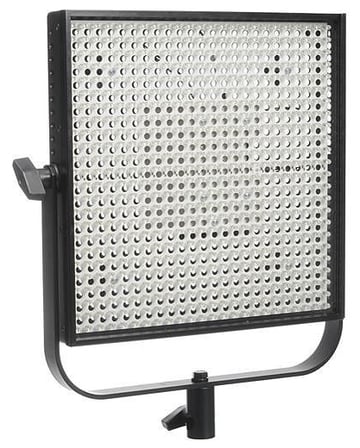 Whatever the type of lighting, make sure to pick up some lighting hardware. Lighting hardware includes light modifiers like softboxes, barn doors, color gels, gobos, etc. These make positioning the light and working with it much easier.

DSLRs as video cameras produce great cinematic results. To take it to the next level, a rig and railing system allows for complete control of the camera focus, allowing for professional style focus pulling and stabilization.

Some rigs simply help you stabilize the camera by making it into a shoulder mounted camera (like television cameras) while other rigs turn a DSLR into a full film-making rig with a monitor, rails, gears and follow focus.

The goal of a DSLR rig is to allow easier camera movements with easier focusing. By holding the DSLR more like a video camera, it creates better video with less "jello shots" and shaky camera.

A camera rig can be comprised of many elements, but here's a few of the basic ones. Which ones you will need will depend on the scale of your project. 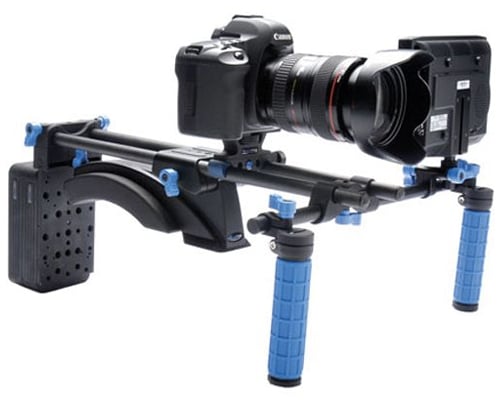 Rails make up the base of a DSLR rig. The camera is mounted to a plate and then to them. This allows easy movement of the camera for focusing and helps distribute the weight. Rails also make transporting the camera easier, as the other elements attach to it.

Gears lock onto your cameras lens, then a focus wheel is attached. With the follow focus, you can manually focus the camera with a large wheel more precisely.

While some DSLRs have autofocus for video, some major brands still don't have reliable autofocus. With a follow focus you can more easily control your camera's focus and quickly change it without shaking the camera or lens.

Budget Recommendation: D|Focus Version 3 $140 - Very afforably priced compared to the competition, this follow focus is great for just starting out.

A matte box is like a lens hood. It helps block out the sun and other light that is unwanted. 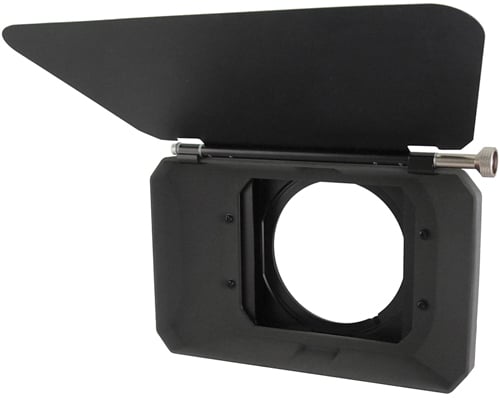 A shoulder mounted rig allows it to function more like a professional video camera. This allows more stability and fluidity in camera moves.

Focusing and watching the back monitor on a DSLR can be a pain, so an external monitor can be added on many rigs for easier viewing.

Budget Recommendation: Jag35 Monitor $249 - Not in HD, but a great afforable solution to seeing your video on a bigger screen.

Remember with any external monitor, you'll need a battery and HDMI cord to connect your DSLR camera to the monitor.

A compelling video needs more than great footage, so you'll want to capture great audio as well. Cameras like the Nikon D300s and Canon 7D have video built in, but the audio quality is subpar.

To fix this, an external microphone can be used to capture crisp audio. Depending on the type of production, a shotgun or lavaliere microphone will work. With microphones, it's not an either/or. I carry both in my bag for different situations. 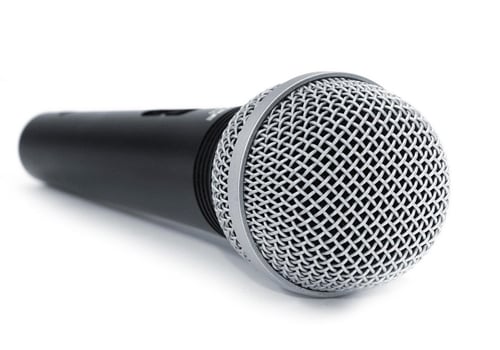 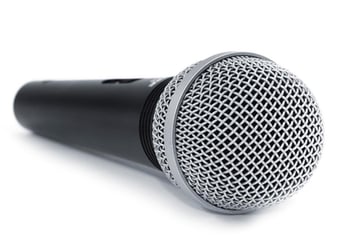 A shotgun microphone is a highly directional and looks like a long stick. They're great for placing on top of the camera to capture sound of what you're directly filming. Shotgun microphones can also be held above a person talking.

Recommendation: Audio-Technica AT-875 - Shotgun Microphone Basic Kit $580 - Everything you need to start recording. 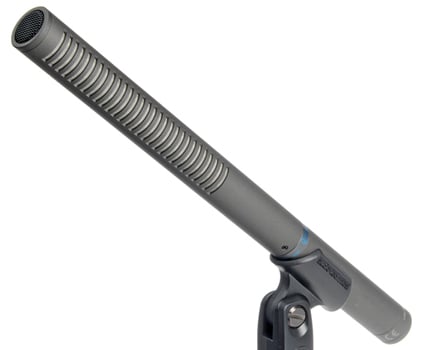 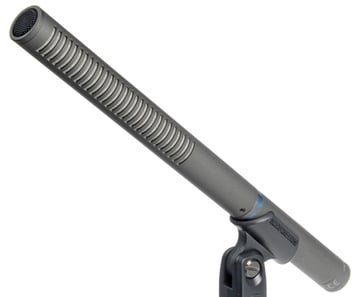 A lavaliere microphone is a small microphone which is placed on a person. This is a common type of microphone in television news and sports coverage. It's very good for interviews. 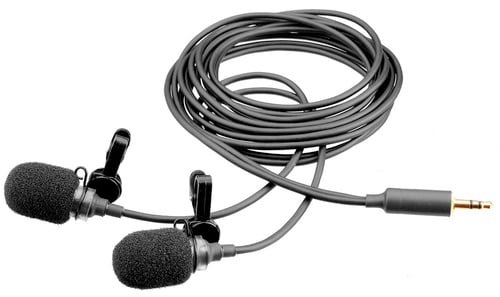 No matter the microphone type, it's a good idea to purchase a windscreen. Windscreens help cut down on wind sound and sounds made by people talking in the background. Some microphones even include mounts to place the microphone in the camera's hotshot, cutting down on microphone movement sound.

Recommendation: Windscreens usually come with the microphone you purchase.

Memory, and Lots of It

This may be a no brainer, but having ample storage is key to having a successful shoot. High definition video chews through memory faster than RAW photos.

Most DSLRs take SDHC cards, which allow for more video to be stored. Coming soon: cards up to 128gb. It's also a good idea to have a sizeable external hard drive that runs at 7200rpm to store the video.

Recommendation: Depends on your camera, but choose the cards with the fastest write speed. In SDs case, choose SDHD cards.

Tripods come in various sizes, weights and builds, but a good tripod will go a long way in a video production. Look for one that has a low ground clearance and also can hold a large amount of weight, especially if you have a full camera rig (as talked about above).

Tripod manufacturers make tripods for both photographers and videographers. The main difference is ease of controls and movement. A video tripod is made to move more smoothly, as you may be filming while moving it.

A photo tripod can require more steps to move the camera. Also, depending on the head, some camera shots may become impossible.

When looking for a tripod head for video, look for tripod heads that are fluid. This allows easier movement and flexibility. Many of these heads can be screwed on to photo tripod's legs for use. 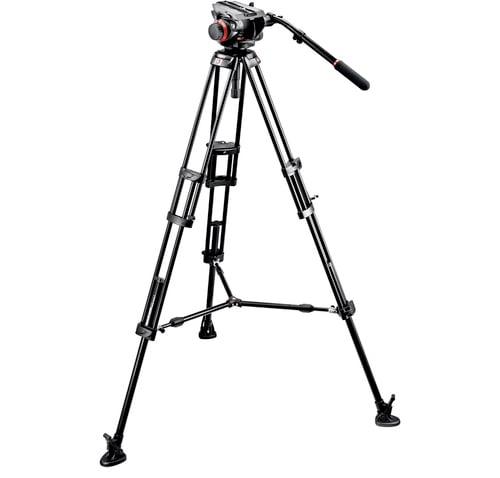 Having the right gear will allow you to capture the right shots in any conditions. The tips above are a starting point for creating your DSLR video setup and can be expanded in many directions depending on your type of videography.

Happy filming, and feel free to share your own advice and recommendations in the comments!