All About the Dreaded Fungus - Lomography Tipster

Once a month, we bring you a tipster from Lomography.com. Their ever-growing database of film knowledge offers tricks, tips and techniques that often outside the realm of mainstream photography.

Fungus can slowly take over and destroy your precious lenses and film. If you are still not aware of this problem that could be growing on your gear, get acquainted with this guide which explains, among other things, what fungus is, what it does to your equipment, and how you can prevent it.

What is this dreaded fungus?

If you buy new equipment and take good care of it, you may not encounter fungus. But if you own any vintage cameras or old lenses, this could be a problem and you may not even know it!

When you think of fungus, you may think of mushrooms, yeast, alcohol fermentation, traditional Chinese medicine or even fungal skin infections (ack!), but mould can be deadly for camera equipment and film.

Fungus is a tiny organism that can grow on film and lens surfaces, inside lenses, between the elements, and under lens coatings. It sets down its “roots” very quickly and multiplies even faster. It is very hard to remove fungus completely once it has taken hold, so it’s best to start prevention before it appears.

How exactly is it bad for my equipment and film?

As it grows on glass, it can permanently etch the surface, causing your photos to become “soft”, less contrasty, have more flare, or slightly darker. On film, once it sets in, the same thing happens. As it has “set roots” in, even if you wipe it away, there are still marks remaining. The effects of fungus may take years to become visible on photos though.

How does fungus get on my lenses and film?

High humidity is the main cause, so if you live in the tropics, or often go shooting in the rain, beware! Fungus is among the most abundant organisms in the world, and it mostly multiplies by teeny spores, which are everywhere. They can find their way into lenses because they are so small. Moisture (from rain, or the high humidity) then helps it grow at super speed.

How do I spot it and what does it look like?

Take out your lens, open it to the widest aperture (biggest hole), and hold it up to bright light. You can also use a torch light and shine it on the lens. Look through the lens. If you see something that looks like dust, but more spidery and in blobs or clumps, you’re in trouble.

Here are a few examples: 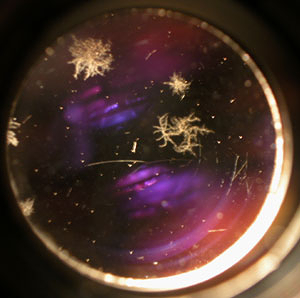 The image above shows it in early blob stage. It’s past the part where it could be mistaken for dust, as it’s clumping together and multiplying. 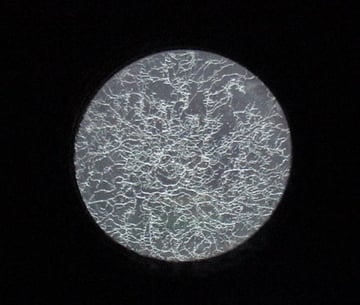 This image above is how it looks when it has taken over the whole lens surface, which is bad news. 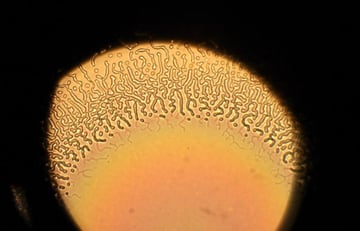 On rare occasions, it could look like bacteria. As shown in the example above, fungus usually starts from the edge of the lens and grows inwards. 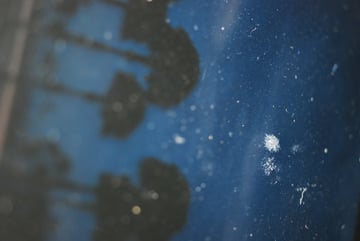 The example above is how it could look like on film, which is in blobs as well. The fungus was spidery too, but that can’t be seen here.

How do I prevent its growth?

There is no definite way of keeping fungus out given its tiny and effective spores. I have had lenses kept in dry conditions yet they magically grew fungus. However, there are some good ways to lower its chances of taking hold. Fungus thrives in humid (and dark) places, so the best way would be to suck its life-giving moisture out. So take your lenses and film out of your drawers and boxes right now!

Some ways to keep humidity low: 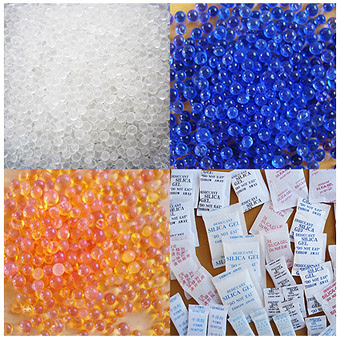 Silica gel is not really a gel. It is most commonly sold in the form of tiny beads (above), and is useful for controlling humidity. If you buy stuff and see packets saying “do not eat”, it most likely contains silica gel beads. Please, do not eat it. To use it, buy a dry box (sealed or airtight case) first – then pour the beads in and keep your equipment or film in the box. The beads will change colour when they absorb moisture.

Keep an eye on them and when they show water saturation, you should either buy a new pack of beads or heat them up until they return to their original colour (meaning they are highly absorbant again). Some people have stir-fried the beads in a pan, baked them in an oven, or even microwaved it. Just don’t reuse that pan or baking tray for food! You could also try sunning them for reuse. 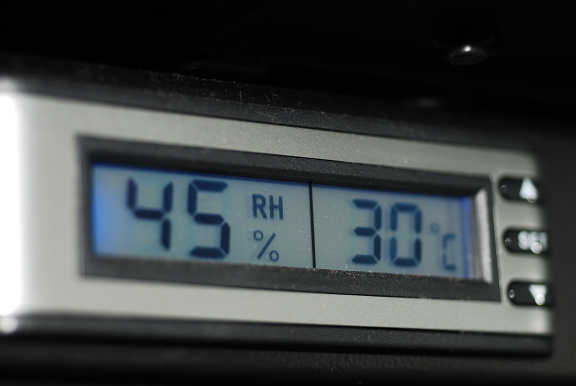 The dry cabinet is probably the best option as it gives you more control over the humidity. It comes with an analogue dial or tells you digitally (above) what level the humidity is, and you can also choose your humidity level. Camera equipment is best stored at 35-45% humidity.

About humidity: Don’t keep levels too low as cameras and lenses are lightly lubricated and low humidity could dry up that oil quickly, making your lenses zoom slower than normal, for example.

Otherwise, the dehumidifier also sucks out moisture, but this would have to be an enclosed room. Aircon is also an option, because cold air holds less moisture, but it consumes lots of electricity and is expensive.

Another way to fight fungus growth would be to use your equipment regularly. Keeping it for too long in a dry cabinet won’t help as cameras should get some fresh air from time to time. Cameras used daily are much less likely to get fungus (but more dust) than those which are kept even in less humid conditions.

How do I get rid of fungus?

Once it has grown on the lens or film, it will likely return even after being removed. Thus it is best to follow the prevention methods above. However, if your lenses have caught the fungi bug, you can either clean it yourself, or send it for professional cleaning.

Self-cleaning is more possible when the fungus is on the exterior of the lens. Use hydrogen peroxide, bleach or rubbing alcohol to wipe the glass surface gently, which will likely kill as well as remove the fungus. Lens cleaning paper, like this one below, is best as it is lintless and soft, making it less likely to scratch your lens. 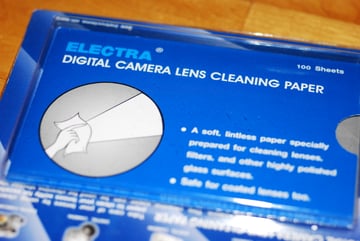 Professional cleaning is the best, and sometimes only, option, when the fungus has grown inside the lens. These specialists will give it a thorough cleaning for a certain price. In Singapore, it costs about $80-100 to get a lens cleaned at a camera shop. If the fungus has etched the glass surface, the lens may need to be polished and require a new coating as well.

Alternative methods (which have both worked and failed for people)

Some have tried sunning their lenses by leaving it in the open, or putting their fungus-infected equipment under UV lamps. This has worked for some, and also boosted fungus growth for some, so please be wary if trying it.

For film, some have recommended putting it in the freezer and then wiping off the fungus gently when there is condensation. I have tried this and it worked but temporarily only as the fungus came back.

It won’t go away…

However, as mentioned earlier, please note that fungus can make a dreaded return, even if you store it in a dry cabinet after cleaning. Certain items are just more prone to fungus. I kept all my lenses in one dry cabinet in the past, and two showed signs of fungus (they were moved to a separate dry cabinet) while the rest were, and still are, fine. This has been the case for many other photographers as well. In the case that fungus starts growing on your lens again, please keep it separately from the rest of your equipment.

Use your equipment as much as possible. After each use, let it air dry then store it in a low-humidity environment. The same goes for film – keep it in a dry cabinet if possible, or years down the road your memories could be etched with fungus.

Please leave any comments if you have any other suggestions on how to keep fungus at bay or how to remove it!

FungusLensesLens Care
Did you find this post useful?
Yes No
Would you like to provide feedback (optional)?
Cancel Submit
Want a weekly email summary?
Subscribe below and we’ll send you a weekly email summary of all new Photo & Video tutorials. Never miss out on learning about the next big thing.
Sign up