An Essential Tool: The Camera Remote

If your camera bag looks anything like mine, it's probably full of overpriced accessories that you rarely use. There's so many camera add-ons out there that are tempting to buy, but many photographers miss my favorite accessory: the camera remote. Let's take a look at all of the things it can do for us.

The best accessory is one that you can use for lots of different photo experiments. I know that I'm always looking for accessories that give me lots of new options and photo techniques to try. Today, I'm going to tell you all about the Swiss Army knife of photographic accessories: the multi-function remote.

First of all, let's take a look at the type of remote that I'm talking about. This is more complex than the simple wireless remote used to fire the shutter from several feet away. I'm going to talk about the multi-function wired remotes that have a ton of features built into them.

The first-party camera remotes are feature packed, but often pricy. The Canon remote that pairs with my 5D Mark II is the TC-80N3. It retails for over $130, but has a ton of features built into it.

These days, there are a lot of inexpensive third party options. My remote of choice is one made by a company called Shoot. This remote works exactly like the Canon remote. I tried another clone of a remote from another brand first and found that not all functions were working.

However, I eventually worked out a return and purchased the Shoot remote instead. These third-party clones often lack the quality control of the first-party equivalents, so purchase at your own risk.

This Shoot remote works almost exactly like the Canon copy, and has the functions to pull off lots of different camera tricks.

This common type of remote gives us a number of functions that can really help us expand our photographic tricks. Let's take a look at the ways that a remote can help us branch out in our photography.

Across the board, all these remotes work very similarly. The remote I'm using is the third party one that I mentioned above, but you will find the remotes to work pretty similarly and follow the same conventions. 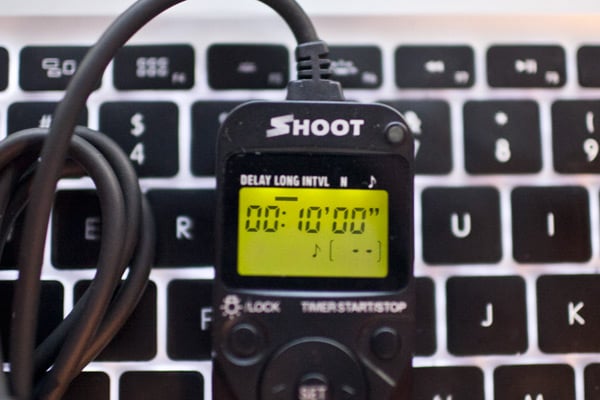 These remotes work in similar styles. Three blocks of digits can be set with different time options to trigger the camera in different ways.

For each of the functions below, these times mean something different. In long exposure photography, this time refers to how long the shutter remains open. For the intervalometer, the time represents the time between each frame that gets fired. In the timer mode, the time just represents how long the remote counts down before firing.

Pressing the big button on this remote simply sets the shutter off. Triggering is handy to keep the camera from shaking.

I can think of a number of situations where this has really come in handy for me. Not too long ago, I was photographing waterfalls and used long exposures. In these cases, I was leaving the shutter open for 30 or more seconds. My camera was on a tripod in order to ensure sharp photos, free from camera movement. Pressing the shutter button on the camera could have caused it to shake, so the shutter release of the remote was essential to me.

Cameras have the ability to give us fairly long shutter speeds. On a lot of cameras, the slowest shutter speed that we can use is 30 seconds, or maybe a minute in length. However, a remote changes the game. With my remote, I can actually set the shutter speed to be almost 100 hours in length.

This is hardly practical, but it's nothing unusual to use 5 or 10 minute exposures when I'm doing night photography. Many photographers might even use 30 minute or hour long exposures.

I used a remote with a two minute exposure to make this photo.

Have you ever seen one of those videos where we can watch a lot of time pass in just a few seconds? The remote's intervalometer can help us create these clips, known as time lapse videos. If you aren't familiar with time lapse photography, the resulting product is a short video clip that shows how time passes.

To build a time lapse, we need a series of photos. The best way to do this is to shoot a series of evenly-spaced photos that we can later put together on the computer. The important part is that we keep the camera firing. Sure we could do this manually by pressing the shutter every X seconds, but a remote can automate that process and do it automatically. 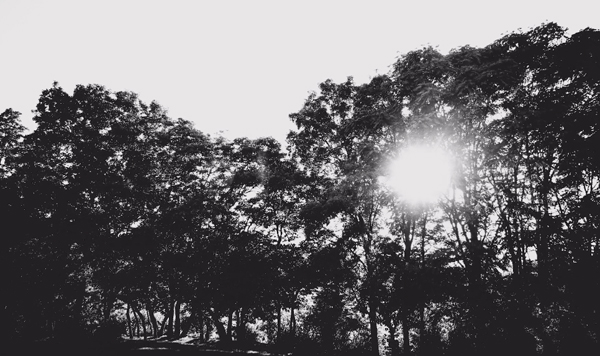 I used a remote with an intervalometer function to put together a tutorial for PhotoTuts+ on time lapse photography.

With the intervalometer feature, we set how often we want the camera to fire. We can enter an interval in hours / minutes / seconds format, and start the timer. From there, the camera will fire off as often as the remote sends the signal. We can even set the remote to fire a preset number of frames, or indefinitely when our memory card is full of images.

Even if you aren't trying to compile your photos into a time lapse, it can be interesting to build a series of photos you can flip through to see time passing. Using the intervalometer function of a remote lets us streamline the photo taking process and ensure we get a steady stream of evenly spaced photos. The intervalometer is going to guarantee that we have uniformity in the photos that we get. 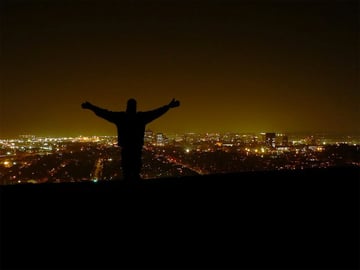 Flickr user llimllib used the self timer for this self portrait.

The timer function is helpful when you're shooting photos that you want to be in. Start the countdown and jump in the frame before the timer counts down completely. Timers have been the key to getting the family photos that include the photographer.

On my remote, all that we need to do is set several of these at the same time. The camera will automatically take into account all of the settings we've selected and perform them simultaneously. 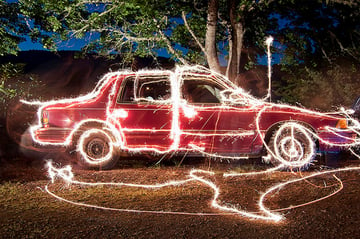 This photo by Flickr user Photo Extremist definitely used a long exposure to capture a sparkler around the car. Stacking a self timer could also help the photographer get into the photo before starting the exposure.

As a sidenote, this is also something good to look for when our camera is acting up. If the remote is firing our camera in a strange way, make sure that the remote is not set in several of these settings simultaneously. Clear the functions you aren't trying to use, and isolate the function you do want to use.

If you don't already have a remote in your collection, I would highly recommend picking one up. There are few tools that can help you add as many tricks to your arsenal as a remote. I really like the idea of adding accessories that allow me to further expand my creativity, and I think a remote is top notch for that purpose. For what you spend, one small accessory can add a variety of functions to your camera that expands your creative horizons.

Remote Shutter Release
Did you find this post useful?
Yes No
Would you like to provide feedback (optional)?
Cancel Submit