An In-Depth Look at Megapixels and Resolution

If you've bought a digital camera at a big box retail store, you've probably been sold on the features of the digital cameras they're trying to move. Perhaps no feature is more oversold than megapixels, a count of the resolution of the camera's image files. In today's article, we're going to take a look at the ever growing race to pack more pixels onto camera sensors and learn why it's not all about the megapixels.

What the heck is a megapixel?

Despite many people basing their camera purchases largely on the megapixel count, a surprising amount of photographers aren't aware of what megapixels actually mean.

When a digital camera makes a photo, it outputs a file. Most often, the resulting file is either a JPEG or RAW format image. Raw is a special type of proprietary image format, meaning that one camera's version of RAW is different from the next.

Regardless of format, the image has pixel dimensions. For instance, the image files output by my Canon 5D Mark II are 5616 pixels on the long side and 3744 pixels on the short side. If you're not familiar with pixels, they are the tiny dots that make up digital images; whether on our computer screen or our camera sensors, pixels are very much the building block of the digital world.

Back to the 5D Mark II images: let's do a little megapixel math. If we multiply the two pixel dimension numbers - 5616 times 3744 - the resulting number is 21,026,304. For you non-mathematicians, that's 21 million. Which brings us to a revelation - the 5D Mark II's sensor is a 21 megapixel sensor. Thus, the megapixel count of an image is a measurement of the pixel area in an image, and can be found by multiplying the pixel dimensions. 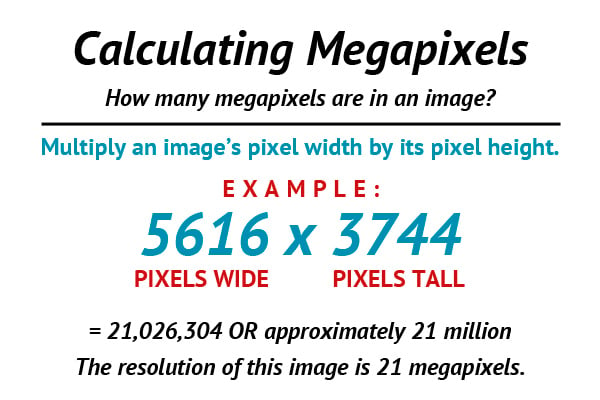 As digital cameras grew in popularity, megapixels were pushed by marketing departments as a way to differentiate one camera from the next. Consumers became focused on megapixel counts as the singular most important feature of cameras. As sensors were more packed with pixels, photographers were constantly updating their setups in order to keep up with the latest high count sensors.

It's Not The Pixels

Although high quality cameras often are loaded with high megapixel sensors, the megapixel count is not the determining factor for image quality. You might have a cell phone with an 8 megapixel camera, but I doubt the image quality of it can match even a 6 megapixel digital SLR sensor like the Nikon D40.

The next time you're being sold on the quality of a camera based on the megapixel count, take a good step back and remember that sensor size is an even more important factor in the image quality equation. Right now, a high megapixel cell phone sensor still can't touch a low megapixel, larger sized sensor.

It's easy for a salesperson to pitch a camera based upon megapixels. Perhaps it's human nature to want to condense a discussion or ranking of something to a single number, regardless of how inaccurate it is. Too many in the industry latched onto using megapixels as the main point of interest or ranking criteria, and forgot that it was mostly arbitrary when it comes to image quality. Don't forget that megapixels are solely a measurement of the dimensions of the image size output by the camera, not the amount of detail captured or dynamic range of the image.

In the last month, Canon and Nikon have launched their latest offerings. Canon brought forth the 5D Mark III, while Nikon unveiled the D800. Let's take a look at how these new cameras fit into the context of the megapixel race.

Last generation's flagship D700 was a 12 megapixel shooter, while the D800 houses a 36 megapixel sensor. At the time of the D700's release, photographers were divided upon Nikon's choice to use what some viewed as a "low megapixel" sensor. Many photographers felt that 12 megapixels was more than enough for their usage, and lauded Nikon's commitment to low noise, high quality imagery over massive megapixel counts. Nikonians seeking high megapixel counts were steered to the company's 24 megapixel D3x.

With the D800, Nikon may be signaling a shift in megapixel mindset. The D800 packs a 36 megapixel sensor and pushes images with a resolution of 6144x4912 pixels. However, across from the D800 sits the Nikon D4. In the D4, Nikon packed a 16 megapixel sensor. The D4 is more costly than the D800, and is targeted toward speed shooting and perhaps a better high ISO experience.

With last generation's Canon 5D Mark II, the jump from 12.8 megapixels to 21.1 megapixels showed a commitment toward growing the resolution of subsequent cameras. Many were thrilled by the massive resolution output of the 5D Mark II.

In the newly announced 5D Mark III, the resolution of the sensor was pushed only to 22 megapixels. However, two more stops of ISO are available to push the limits of what is possible with low light shooting.

In this, Canon has shown growth in high ISO performance while leaving the resolution virtually untouched. It's clear that Canon's intention with this camera was to keep the already high resolution in place, and improve high ISO offerings.

The advantages of huge resolution sensors aren't hard to spot. High megapixel count sensors render high resolution files. The larger the file, the more data we have to work with. If you own even a somewhat recent DSLR, you certainly possess a tool capable of outputting high quality images even at billboard size. The level of detail improves with each generation of camera, thanks in large part to growing amounts of resolution captured.

With a high resolution camera like the 5D Mark II at my disposal, I've taken advantage of the high resolution on a number of occasions. Sometimes, I have created crops of images that would not have been possible with another camera. Those 21 megapixels render a huge final image from which I can create a crop and still have enough resolution to produce a large final image.

More pixels, more problems. It's true that high megapixel cameras afford photographers the ability to capture huge amounts of detail and resolution, but they also carry with them some problems that their predecessors might not. Let's take a look at some of the issues.

From my own experience with my measly 21 megapixel 5D Mark II, I'm often crazed by the speed at which my memory card is filled. Huge, 20 megabyte plus RAW images fill my 4GB or 8GB memory cards pretty quickly, and fill my hard drives equally fast. The resolution is a luxury, but only if you use it. For me, I often use a mode on the 5D that allows me to shoot a lesser resolution and still retain excellent image quality.

Another issue with super high resolution sensors is finding a lens that matches the sensor's potential. With higher resolution, we need higher quality optics that can "resolve" the detail of the sensor. This characteristic can be both good and bad; if you have fantastic lenses, your image quality will shine, while poorer lenses will really have their softness exposed.

Ultimately, high megapixel count cameras are more susceptible to noise. Trading off ISO performance for resolution is a decision that camera manufacturers are faced with.

Photographers have different needs and demands, and certainly make their voice heard with what they expect in their next camera. On one side of the aisle are those that will always recommend higher resolution sensors. Landscape shooters, stock photographers, and others are looking to pull the most detail and image resolution in their work. With digital medium format cameras becoming more popular, those that demand resolution may look to jump to an even larger sensor with more resolution packed onto the chip.

What could come next for digital SLR's? How much more resolution will photographers demand? Frankly, I wonder how many photographers are currently in need of 36 megapixels. The aggressively priced Nikon D800 will surely move many units, but is it because of the resolution packed into the sensor?

Consumers lead the charge in telling manufacturers their needs. If consumers demand more megapixels, the big camera labels will respond with more offerings like the D800. However, a consumer priority on high ISO performance and other gains such as autofocus speed will inspire more cameras such as the 5D Mark III.

As technology improves, camera manufacturers can improve high ISO performance even as more megapixels are added to the sensor due to advances in technology.

Although not the main factor driving image quality, the growing number of megapixels packed onto sensors is an important part of setting one camera apart from the next and differentiating product offerings. At what point are enough megapixels enough? In time, the manufacturers of digital SLR's will unveil their priorities, and likely will offer a variety of cameras that meet varying needs.

What will you look for in choosing your next SLR? Do you need more resolution, and if so, what for? Chime in with a comment to let us know your thoughts on the ongoing megapixel wars.