Building a Narrative Through Photojournalism

Telling visual stories is the work and craft of the photojournalist. I remember it from the first hard news story I covered, back in 1980: a bank robbery that completely defined my future.

The images on this page tell the story of a man saved from the sea, the same day a preeminent Portuguese pianist died when falling from the cliffs overlooking the Atlantic outside Portugal's capital, Lisbon, while taking photographs.

Rock fishermen on the Portuguese coast take risks to get to the best places for fishing. And in the act give photographers some amazing pictures.

The pictures for this article were taken on the same coast and line of cliffs, but a few miles north, and cover a situation that had a happy end. There is a story in these images and there's a lesson for all those that want to cover news, either hard news or simply to tell the story of a day out with the family.

Here are some general tips on how to organize your picture taking, define what is important, and do the best you can with the gear you have in hand. But first you have to seize the moment and also be watchful of things happening around you.

It had been a long day out, photographing on the coast of Sintra (check on Google to have an idea of this coastal area), and I was already moving towards home, but still not sure if I would stay around for sunset. The ambulance that dashed by me on the opposite direction made me alert.

A second siren echoed closer to me from a fire department van with the letters DIVE RESCUE painted on the side. This forced me into a decision. I went after them. I was tired, but if you've been covering news for years, there's an "itch" that stays inside you forever.

Once you define that you have a story you want to tell, you need to get the general shots that will be the foundation of it. They need to be technically sound, but also show content that matters.

I had that first experience some 32 years ago, on the 5th of May 1980, when a Portuguese terrorist group called FP-25 robbed a bank and killed a police officer. I was close by, always with a camera, and was the first photographer on the scene.

I took all the pictures I could at the bank, contacted a newspaper in Lisbon, agreed they would publish the story, and went on to interview people at the police station to get some more details. I made the front page of the newspaper the day after. 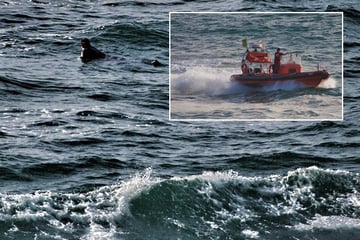 A picture of the fisherman waiting to be saved pairs with another image that shows the Navy dinghy flying over the waves. There's no doubt to the reader of the meaning of the two images.

From a terrorist assault to an embassy to police stations blown by bombs, I've lived through some situations that force you to define your priorities in terms of picture taking. And although I've used those skills for other kinds of more calm imagery, this recent story got my adrenalin flowing high again.

While the dive team was preparing to enter the water, a Navy dinghy appeared in the horizon, further down along the coast. Flying - it's the right term - over the waves, the boat was close to the fisherman in a few minutes, saving him from the water. A happy end. 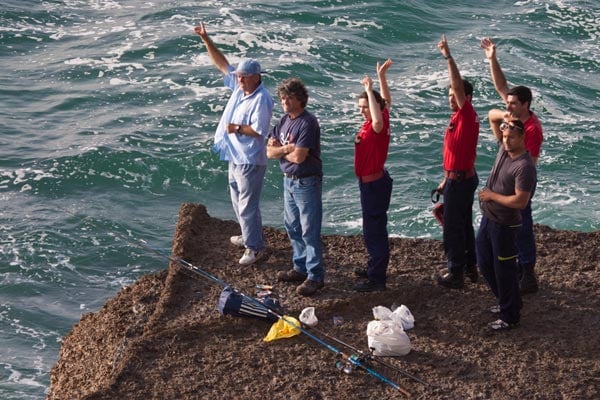 Firemen on a plateau, near the water, point the dinghy pilot the right direction to the fallen fisherman. A picture that helps to tell the story

I never stopped taking pictures. I started by taking a picture of the fire department cars and people close to the cliff's edge. Then I followed by some images of the fisherman. Even my 400mm on a crop APS-C body could not get closer. The approaching Navy dinghy was next in my priorities and I had time to glance at some firemen that had reached the base of the cliff, and were signaling the dinghy people the direction of the man waiting - and wanting - to be rescued.

Soon it was over. But I still got pictures of the fisherman being taken onboard, and the moment he raised his arms to the audience on the cliff. Some people on the cliff even clapped their hands. Slowly the dinghy started to move way to the nearest port. Life was getting back to normal, again. 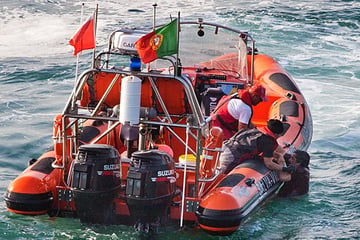 The moment the fisherman is taken from the water. The position of the dinghy helped to get a good image as there was no way to move to another angle.

News like this happens every day, everywhere. You don't need to have a lot of gear. I just used my 100-400mm for all the pictures. You just have to know your camera well, so you can define exposure and all the rest without hesitation. The other side of the story would be contact a newspaper and offer to sell them the images. Don't give them away, it's the giving that has made photojournalists poorer. If the photos are good, even if you're an amateur, you should get paid, not with a credit line in the newspaper but with real money.

Be fast. Think fast about which shots you need to create the narrative, do those first and then keep shooting. And don't stop when all seems finished. If I had I would not have the two images that make the difference.

The fisherman with arms raised on one picture and the man taking a snapshot of the dinghy while a woman member of the fire department uses her cell phone. Those images show exactly one thing: human nature. They're important to make your readers stop and look again, and again. And maybe smile, especially because it all ended well. 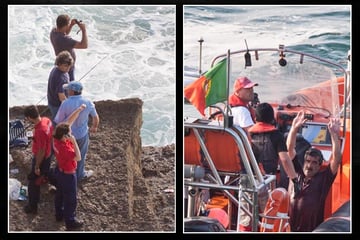 The final two pictures help the reader put the whole story together, human elements and all.

Practice building narratives with anything that happens around you. Don't just shoot single images, try to build stories. This is a tip that I learned back in the eighties and managed never to lose grip of.

Get your images as things happen, try to build a narrative, because there's no second time in news gathering of this kind. If I can do it, you can do it. After all it is just like riding a bike. Even if you've not done it for years, you still know the essential aspects of it.