If you're just getting started with photography, the letters on your camera's dial might feel like hieroglyphics. With a variety of modes, it can be hard to pick what's right for the current shooting situation. Today, we're going to explain common camera modes so that you can pick the right one for any situation and grow out of using auto mode.

The Limitations of Auto

The problem at hand is that automatic mode is not going to get you the best photos. Although technology will continue to improve and cameras become successively smarter, the best technology is still no match for a skilled artist. Understanding how a scene looks to a camera and choosing the settings on your own is a liberating experience that will free you from the bounds of automatic mode and allow you to progress to the next level of image making.

The key to understanding these settings is understanding what they control. For the purpose of this tutorial, we need to review the settings that control the look of our images.

If you're not familiar with the concept of the exposure triangle, the idea is that three camera settings control the outcome of our photos. Keeping those three settings in balance is the key to making a photo appear the way you want. Let's take a look at those three settings:

This simple exposure triangle illustration shows the three factors that balance the light equation of every photo.

Inside of almost every lens are "blades." These blades form what is known as the aperture, and also contribute to the exposure by controlling the amount of light that passes through the lens to the sensor.

These aperture blades can be "stopped down" or closed in order to allow in less light, or opened up to allow more light through. Each lens, however, has aperture limitations, and you'll find lenses with very wide open apertures are more costly.

The aperture blades of a lens regulate the amount of light passing through. Photo by niXerKG.

ISO is the camera sensor's overall sensitivity to light. In the film days, film was sold at different ISO "speeds." These classifications are now dynamic, as we can change the ISO from shot to shot with digital cameras. At lower ISO's (like 100 or 400), the sensitivity to light is low, but the image quality will be the strongest. As we raise the ISO, we can pull more light from a scene, but at the cost of noise or graininess in our photos.

A note about ISO: although ISO is a part of the exposure triangle, it is somewhat independent of the modes below. Many cameras feature an auto ISO mode in which you select a maximum ISO, and the camera selects something within that range.

One way to understand this is to imagine filling up a bucket. The size of the bucket is the ISO. 100 ISO is a big bucket needing a lot of water to fill up. How far you turn the faucet handle is the aperture, and how long you leave the water on is the shutter speed. F/2 for example is a wider aperture, a gushing faucet. F/16 is a narrow aperture, a dripping faucet.

In order to fill the buck with F/16, you'll have to leave the faucet on for a long time. That is, unless you have a very shallow bucket, like ISO 3200.

This analogy is very helpful for some people, for others it's just confusing. If you're confused, that's alright, just keep moving on.

Let's take a look at how the modes manipulate these settings.

Use it when: you are just getting started and are focusing on making lots of photos.

If you've not dared to venture away from the settings the camera had out of the box, your camera is likely still in automatic mode. In automatic mode, the camera is going to pick all of your settings for you. This is an easy mode, and is the most common choice of beginners not concerned with settings. It will likely even pop up the flash for you when needed!

However, this mode will never allow you to reach your potential as a photographer. Sure, the camera will choose settings that make your photos look "good enough". If that's all you want from your images, that's fine. But if what you desire is making great photographs and growing as a photographer and artist, check out some of the modes below.

A step up from auto mode, program mode differs slightly from camera to camera. In my experience, one of the major differences of program mode is the ability to decide if we want to use flash. If you don't pop up the flash, it will stay down, unlike in automatic mode when the camera decides on flash's usage. Additionally, program mode also features the ability to "shift" settings, so you can push aperture or shutter speed in one direction or another.

Use it when: controlling the action in a scene is most important

In shutter speed priority mode, the camera allows you to select a shutter speed and then the camera selects the aperture that will properly expose the photo. You'll find this setting handy when you're trying to control motion in a photo. Let's take two extreme examples:

In the first example, you're sitting on the sidelines of the football pitch catching a family member's game. You take a few photos in automatic mode, but every photo is coming out blurry. The problem at hand is that your camera doesn't know that you need to capture action.

Shutter priority mode is the perfect chance to fix this issue! Simply switch to this mode and choose a fast shutter speed to freeze action. In this mode, aperture takes a backseat to controlling the shutter and ensuring sharp subjects. 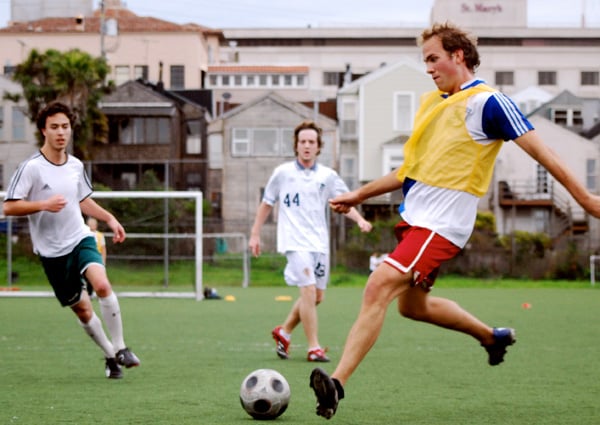 This photo by Flicker user sffoghorn used a fast shutter speed to freeze the kicking action.

In another example, you're on a hiking trip in the mountains. You've come across a waterfall and although you've made a few great photos, you can't help but feel like your photo isn't taking in the power of the falling water.

The problem is that you're freezing the water in a spot, and not capturing the falling water as our mind remembers it. In this case, we need two things: a stable surface to place our camera on, and a slower shutter speed. With a slow shutter speed, we capture a range of action and show the water falling.

Mastering shutter priority can help you to tackle unique shooting situations. These two scenarios show how learning just one mode on the camera can help to attack two unique issues.

Use it when: controlling depth-of-field is most important

In aperture priority mode, we have precise control of the aperture setting, regulating the amount of light that passes through the lens. The biggest effect that aperture has on the "look" of an image is the depth of field.

As we mentioned earlier, with wider apertures like f/1.8 or f/2, the depth-of-field is reduced, thus reducing the amount of the image that is in focus. Again, let's take two scenarios in which controlling aperture is important.

The shallow depth of field, created by using a large aperture in Flickr user's andrewasmith photo, draws the eye to the subject and helps to eliminate background distractions.

In the first of these photos, we're shooting a portrait that has a distracting background. We want to eliminate the distractions of the background, so we'll choose a large aperture, which is a small number aperture. Using aperture priority allows us to push the aperture down to f/2 easily, and thus focus the viewer's eye on only one thing in the photo.

Next, imagine that we have a group photo with people on several "layers" or rows. In this example, we need greater depth of field - an increased area of sharpness. We'll use aperture priority to select a smaller aperture (larger number) and thus increase the area of photo that is in focus.

With an understanding of aperture priority mode, the number of scenes you can tackle is greatly increased. Combined with shutter priority mode, you're quickly learning about how to control the photographic situation you're placed in.

Use it when: you've outgrown every other mode!

Manual mode puts everything in the user's hands. You're tasked with selecting shutter speed, aperture, and ISO. Being in manual mode is liberation as a photographer. It is up to you to select the perfect settings, and only the camera's meter can help you in doing so. Selecting all of the factors allows for complete control over the outcome of a photo.

Try to find the right line when shooting in manual mode. Some beginning photographers are too afraid to ever jump in and try. In contrast, others are too quick to do so and really blow an event by being overzealous with settings. Although you should try to push outward and try new settings, pushing too far and not being prepared to shoot in the proper settings can be dangerous.

Your camera might feature a number of other modes that are tailored to scenes, like fireworks, sports, or landscapes. These differ from camera to camera and are nothing more than a few custom settings. For instance, a sports mode will tend to push shutter speed higher.

I've known a few beginners who were inclined to stick with their current camera because they didn't want to leave these settings behind. However, if you know how to use some of the modes above and can understand the scene you're working with, you can design your own perfect settings on the spot.

Diving into using alternate modes is not as scary as you might think! Checking out some of the other settings of your camera is necessary to growing as a photographer and artist. Choosing a different shooting mode is a great way to begin controlling a scene and photographing it just as you see it.