Ever since Esquire introduced it's trademark covers, high-pass filters and exaggerated sharpness have become very popular tools to work with. The variety of ways to use the technique is simply endless and, due to a vast amount of adjustment layers and tweaks introduced with Photoshop CS4, every slightest change made is different and individual. Today I will show you how to use the tools for creating an image I myself used for medicine advertisement. The purpose of the images was to create an ill-looking, imperfect image.

In every portrait work, the original photo is the most important part, so make sure to choose your image wisely. I am going to use a photo of my friend Kevin I took in a studio environment, but since we are going to get rid of the background eventually, the whole studio thing isn't necessary. Just choose a picture you feel is the best for your project and start working!

Since we are working with a portrait photo, let's make sure that we have a tight close-up on the person. We can crop out all of the unnecessary bits of the picture using the Crop Tool (Shortcut - "C"). Crop out his left arm, so that we focus on his right arm only and leave no space above Kevin's head. Now we have a nice close-up we can work with and the attention is mostly drawn to the face, not the body, which is what we need.

Duplicate the original layer and leave it, because we might need it for later. It is a good practice to save the original, and if you don't follow it, you should. Convert the layer you are working with to a smart object (Right-Click - Convert to Smart Object). Call your layer "S/H"

Now go to Image - Adjustments - Shadows/Highlights. This is where the magic begins. The tool is basically adjusting the highlights and shadows to a point where the needed contrast between the values is achieved. Put up the values as in the picture below, and don't worry about color correction as we will work on it later.

If you're working with your own picture, you will adjust the values according to your picture. Don't be afraid to spend a considerable amount of time on them, those are the values that require the longest time to perfect.

Duplicate the original layer, call the new layer "Sharp" and put it on top of the "S/H". Go to Filter - Sharpen - Smart Sharpen. Put up the amount to 150% and the Radius to 5,0 as shown in the picture. Click OK.

Feel free to change those figures: the larger the radius and amount, the sharper the picture will be. If needed, extra sharpness can be applied to chosen areas using the mask layer. 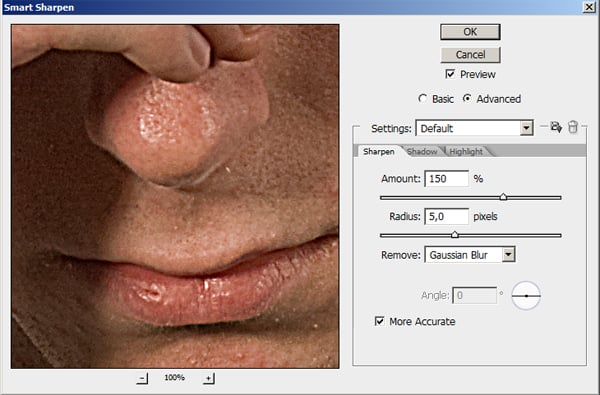 Put the "Sharp" layer's blending mode to Hard Light and lower its opacity to 40%. After these two basic adjustments, we have a nice, sharp and crisp image already.

Beyond this step, the process becomes more creative. Any adjustments I make may need to be adjusted and changed for your specific image.

Choose the Burn tool (Shortcut "O", if you still don't see it, click and hold the Dodge tool and select Burn tool from the list). Put the brush size to 70px, the Exposure to 15% to over-do the burning and the Range to Highlights. Now using the Burn Tool on the Dodge/Burn layer, go over every wrinkle. Changing the range to Shadows go over the shadows - under the chin, under the eyes, etc. Work with the Burn tool until you achieve the result you want. Here is what I have had after 5-10 minutes of burning. 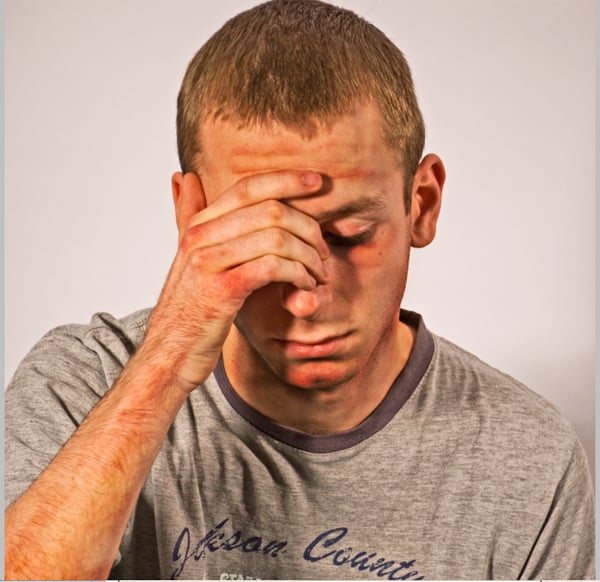 Duplicate all of our three layers (Burn, Sharp, S/H) and merge the duplicates, leaving the originals untouched. Call the new merged layer "Hi-Pass".

Go to Filter - Other - High Pass. Check that the preview is on, and try to make sure that the Radius figure is big but there is little or no color surrounding the object we are “high-passing". Put the layer's blending mode to Hard Light. I hope you like this "ultimate sharpening effect" that the filter gave us. Lower the layers opacity to 90%, so that the layer doesn't look fake. 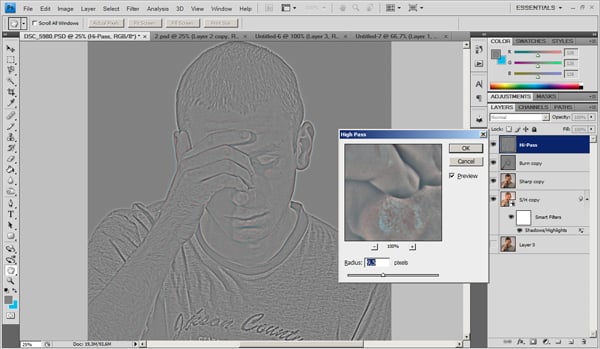 Now that we are more or less finished with the textures, let's work on the color and tones. Create a new Black & White adjustment layer (Layer - New Adjustment Layer - Black & White). Put up the values as shown in the picture and change the layer's opacity to 30%. If you're not exactly happy with the effect, you can try tweaking those sliders until you're satisfied with the final result. 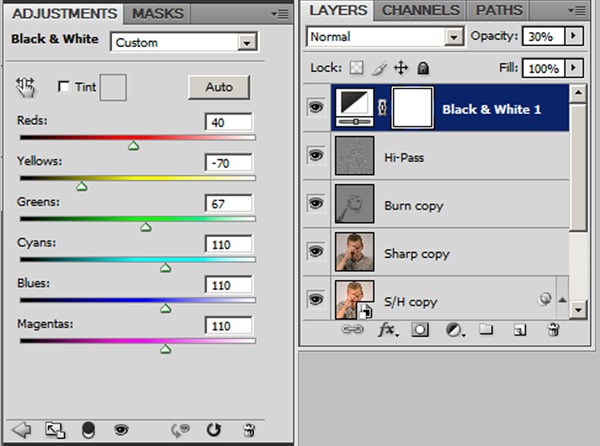 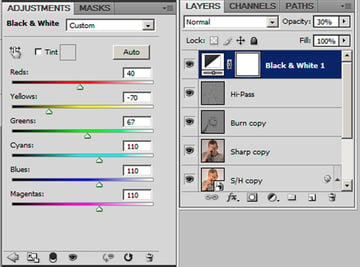 After you're done with Black and White adjustment, add another layer - this time the Hue/Saturation one. Lower the Saturation to -40 to color the picture down and make the person's face pale. Apply mask to the adjustment layer, to hide everything but the body.

Don't be too precise with the selection of the body or its edges will stand out and look fake . Select the areas roughly and then Alt-Click the mask layer's thumbnail (will take you to the actual mask layer; to go back Alt-Click the thumbnail again) and apply Gaussian Blur Filter (50px) to the mask to make the transition smoother.

Ctrl-Click the mask thumbnail to select the area that is filled. Now create a new adjustment layer - Levels. The adjustment will immediately apply to the unmasked area we selected. In the adjustments, increase the highlights (move the white slider to the right as shown in the picture).

Now select the image background using pen tool. Create a new layer and apply the mask from selections made before to it. After that, go to Filter - Render - Clouds. Lower the layer's opacity to 40% so that the clouds don't give away that they are clouds too much. 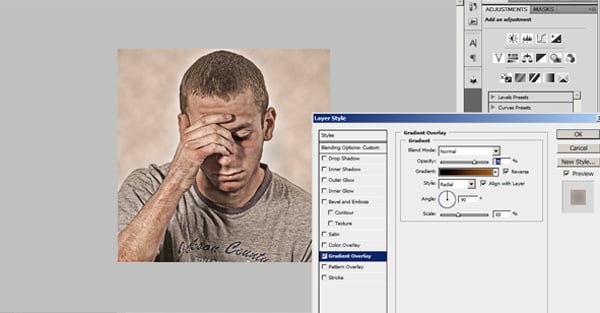 Now in terms of the picture I have finalized here, and not to get into the detail, for my result I have adjusted color balance and the gradient layer, added more burning to the skin, adjusted the exposure and many more little tweaks that make the final result so different and individual

This technique I've shown you creates a very strong effect - the use of which can be endless. To finish off I would to showcase more examples of this effect in action. Below you can see 4 more pictures that were created using the very same technique shown above: