Easy Tips for Shooting the Moon

Pictures of a big moon over a landscape are many times the result of a double exposure. Even when the moon comes closer to Earth, as it did recently, it is too small to fill the frame with normal gear. Still, there are ways to get around the thousands of miles that separate us and our big nightlight. 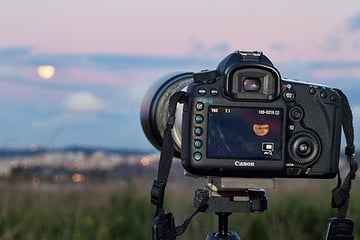 For the 5th of May perigee, the Moon was closer to Earth, but not enough to fill the whole frame on a EOS 5D MK III with a 400mm. Using a wide-angle lens makes the Moon become a small white disk up in the sky. That's how the moon looks in many photos.

Depending on where you were on Earth, you had a different sized "supermoon", as people called it, to watch. Getting the Moon rising on the horizon is one of the best options, as it seems to become smaller as it travels upwards. And once it is up there, it's a small dot in the night sky, especially if you are using a wide-angle lens to fill the image with, for example a monument.

Unless you attach your camera to a telescope, not even a 400mm lens is enough to get a bigger picture of the Moon. The trick is to do two exposures, and then merge them together in your image editor. 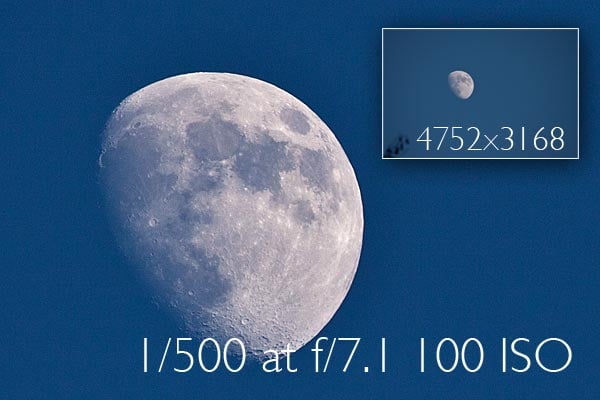 The thumbnail shows the whole frame and its size, while the 600x400 image shows the section cut and resized, taken with a 400mm on a APS-C camera (so a 640mm with the crop ).

You can do a picture for the view you want and then shoot the Moon at the same location, to create a final image, afterwards. Or you can shoot the Moon whenever you find it looks interesting, and keep a library of our natural satellite to use in different situations. Remember, though, to tell people that it's a composite image.

Because the Moon is so far away and surrounded by dark sky, people tend to not be able to expose it correctly. Cameras read the vast expanse of black and ask for more light than needed. The result is a washed out disc without any detail. Now, remember: the Moon is just reflecting the light from the Sun. So, as a guide to expose it, think of the "Sunny 16" rule. In fact, an exposure of 1/125 at f/16 ISO 100 will work, especially with a full moon. 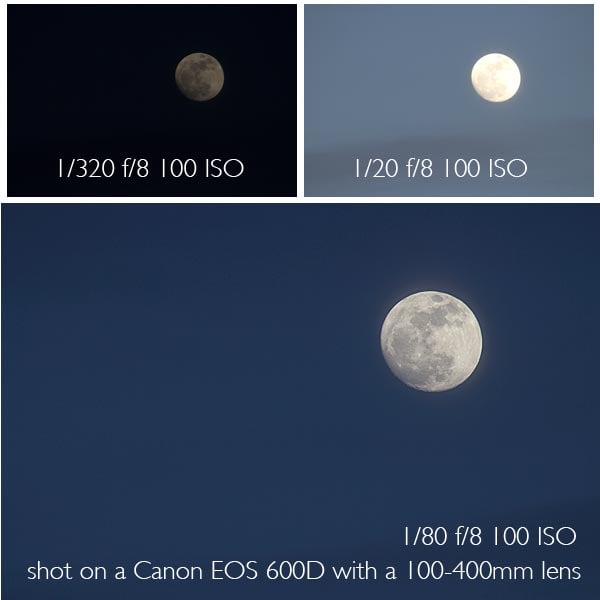 When exposing, keep a value constant and change the other to see what is right. I kept the aperture at f/8 and changed the speed (on a tripod) until I found a combination that worked.

The Sunny 16 rule is a starting point, not a rule. Use it as guide. If the image is too dark you can either lower the speed or open the aperture. If you're using a tripod, it really does not matter which one you change as long as you don't go too slow. Working around 1/15 as the limit will keep you safe, but remember the speed is connected to the size of lens you use: the bigger the lens the more visible the movement will be.

Hand-holding the camera asks for something else. If you're working with a long lens, let's says a 400mm, you need a higher speed to keep it steady: A value of 1/500 f/8 will give you the answer and the same exposure. Now start from there. Too dark? Open the aperture. It's that easy. The last step you can take is to increase ISO, which is easy to accept with the new sensors we have these days.

Remember, again - this is important - that you cannot make a long exposure of the Moon. Due to the rotation of Earth, you'll end with a white line up in the sky. But if you've to go to slower speeds and use a tripod, for sharp images, think about using mirror lock up together with a cable or wireless trigger to make the picture. You can also use the timer in the camera together with the mirror lock, to reduce vibrations. And get a sturdy tripod, as those flimsy supermarket ones cannot even stand a light breeze. 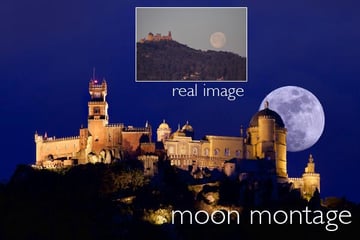 The big image is an example of a montage. But the thumbnail shows a real picture and proves that the Moon does pass that close to the palace.

Once you've got the pictures of the Moon it's time to get the landscape you want to place it in. The image above is such an example. When creating images for this purpose leave enough free space in the upper area to get the Moon in place. This is obviously a montage, but I needed it to illustrate a concept. The palace in the picture sits atop a mountain range called, in ancient times, Mountain of the Moon.

On the other hand the small thumbnail shows that when the distance from the camera to the subject is big, elements as the palace on top of the mountain and Moon seem to have similar sizes, what helps to create those images where the Moon seems really big without having to resort to tricks.