Everything You Need to Know About Lenses: Part 2

So you’ve purchased your first SLR system, welcome to a new world of photography. You’ve opened Pandora’s Box to a huge range of versatility. One of the major factors that sets SLR cameras apart is their ability to change lenses. In part two of our series, we'll talk about the importance of lenses, third-party lenses, caring for your glass, and much more.

The Importance of Lenses

I've watched many new photographers go through a vicious cycle of upgrading camera bodies and seeing only moderate improvements in performance. The truth is that your money is far better spent investing in good lenses than continuously catching up to the newest camera bodies every year. I know that it's tempting to jump for that new camera body with video recording or selective coloring, but money is best spent on building a lens kit.

It's true that cameras continue to grow in megapixel count and image sensor quality. However, if you don't have a good lens to project that image onto the sensor, the truth is that you are wasting the potential that your camera offers. Having worked for a number of professional photographers, it's not uncommon for me to see kits that include the most expensive lenses on the last generation's camera bodies.

Most importantly, glass is forever. If you are sticking with the same camera system, you probably don't have to worry about your lenses becoming incompatible or antiquated. (Just make sure that you don't fill your collection with crop factor lenses before jumping to a full frame camera.) Also, in my experience, I have bought lenses and sold them two years later for the same price or even a little higher. Buy used, and then sell again.

When should you purchase a new camera? The best answer that I can give you is "not as often as 90% of people". I know it's hard to drop $1000 (or even $300!) on a piece of glass, but take it from someone who made that mistake: if you already have a digital SLR, get good lenses or nothing at all. Another simple answer is when your current one is broken beyond repair.

In addition to the lenses that the maker of your camera offers, there are other companies that produce lenses for a variety of cameras. Tamron, Tokina, and Sigma produce lenses for SLR's and are an intriguing prospect for a number of reasons.

Primarily, the allure of these lenses is the low cost. Third party lenses are almost always less expensive than their first party counterparts.

There are definitely some great third party lenses. In my experience, my Tokina 12-24mm lens has been excellent. It's not uncommon for many photographers to choose third party macro and ultrawide lenses because they may not want to spend "first party" money on lenses that get used less often.

As a wedding photographer, I don't shoot wide angle perspectives very often, so the Tokina 12-24mm is an affordable choice for the times that I do.

In my experience, I have had mixed results with these lenses - there are some great ones and some subpar ones. The best thing to do is spend some time Googling reviews for the specific lens and seeing what the results have been for others.

In addition to these budget third party lens, there are also some "premium" lens brands like Zeiss and Voigtländer that seek to outperform the lenses of major manufacturers. Zeiss lenses are a great example of this. Priced at a premium, these lenses have a rabid following of dedicated fans. Although opinions on these lenses vary, most agree that the way that they render scenes is unique. A number of photographers assert that lenses such as these are more suited for the new era of high megapixel full frame sensors, such as the 5D Mark II's.

If you've got great lenses and you've been shooting with them a lot, you've no doubt noticed that those lenses are starting to look worse than they did when you took them out of the box. More than likely, you've accumulated your fair share of spots on the front element of the lens.

Fear not, for these spots are usually easily cleaned. There are a number of tools available to clean lenses with, but my typical tool is a microfiber cloth. It sits inside a small pouch and stays attached to my camera strap for convenience. Rubbing the front element of the lens in a circular motion usually takes most spots right off. I don't typically use any moisture or cleaning solution, although if you have anything sticky or crusty on the lens, it may be necessary. Above all, I wouldn't recommend products like Windex (yes, I've seen it done) on your precious lens. 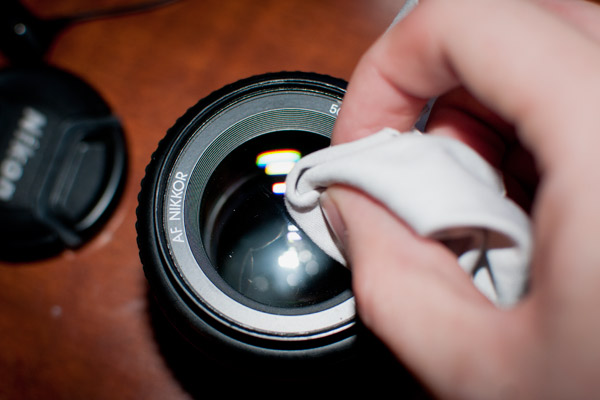 An inexpensive microfiber cloth is perfect for cleaning a lens.

The reason window cleaner and a your t-shirt are bad for your lenses is that they aren't just made of glass, metal and plastic. Many of the lens elements, and specifically the front one, have coatings on them that reduce glare and work to reproduce color accurately. Pictures from the '60s and '70s have that "vintage look" in part because they are old, but also because lens coatings at the time weren't as good. Harsh chemicals and rough cleaning clothes can damage that coating. We'll talking more about coatings in a bit.

Another tip: I would avoid overcleaning. Some gearheads become so concerned with their lenses that they do more harm than good in the cleaning process. Also, consider using a rocket blower to remove dust particles. The truth of the matter is that the easiest way to keep a lens clean is to keep it from getting dirty in the first place.

Also, don't forget that it's a good idea to occasionally send your lenses for a professional cleaning and oiling, especially if you are shooting a lot. A CLA (cleaned, lubed, adjusted), as it is called, can drastically extended the life of your gear, and can be done for camera bodies as well.

In part one of our Lens Basix article, we touched on the importance of autofocus and a little bit about the types of autofocus systems. We learned that some lenses have motors built directly into the lens, while some Nikon lenses rely on the camera to drive focus. Today we're going to take a little more in-depth look into the mechanics of autofocus.

Autofocus starts with the camera's ability to perceive a scene. Any autofocus camera is equipped with a system that is tasked with determining the distance of objects in a scene. Most modern cameras utilize a "passive" autofocus system. This technology may rely on contrast measurement, which is why it helps to point your focus center at an edge of color and not at a solid patch. The other option is phase detection which is hard to explain, but splits the light up and rejoins it, using triangulation to determine distance.

Many lenses feature a scale that indicates the distance at which a lens is focused.

A motor, either a screw driven by a motor on the camera or by a motor built into the lens, helps to move the elements that focus the image. In order to bring an image into focus, lens elements must shift in order to project a sharp, in-focus image onto the sensor.

Have you ever wondered what it is that makes one lens better than another? A lot of this can be attributed to the glass used and the chemicals and compounds used in the process. Although many people believed that lenses were near their optimal quality a few years ago, the engineers of the major camera and lens companies continue to amaze. Nikon was busy developing "Nano crystal coating" while Canon countered with "SWC" - SubWavelength Coating treatment. Both of these made huge strides to control lens flare and improve the overall image quality.

Additional coatings such as "ED" and flourite type coatings all contribute to the amazing optics that exist today. Although many classic lenses offer outstanding sharpness, these modern lenses continue to make technological strides that engineers never thought were possible.

Along with the standard wide angle, medium and telephoto lenses, there are a number of "specialty" lenses that can provide unique images. Let's take a look at some of them:

Ever looked out of the peephole of a hotel or apartment door? The way that those peepholes distort your field of view is extremely similar to a fisheye lens. Imagine taking an image and wrapping it around a sphere - this is basically the same effect as a fisheye type lens. It's called a fisheye lens because of the way water distorts the path of light. If you're underwater looking up at a scene, the view is similar to that of fisheye lens. 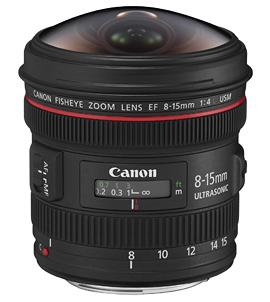 Canon is releasing a new zoom fisheye, the 8-15mm, later this year.

Frequently, you will see fisheye lenses used for special effects such as photographing cars. Also, NASA uses lenses like these for shots in close quarters where even wide angle lenses can't quite show the entire scene.

Tilt shift lenses are a special variety of lenses that allow for movement of the optics inside of the lens. Doing so allows for perspective corrections that aren't possible with standard lenses. Frequently used for architecture photography, tilt shift lenses allow the photographer to alter perspective so that a building's lines stay straight and the image does not appear as if you're pointed upward toward it. Tilt shift lenses can make scenes appear as miniatures if tilted and shifted in a certain way. 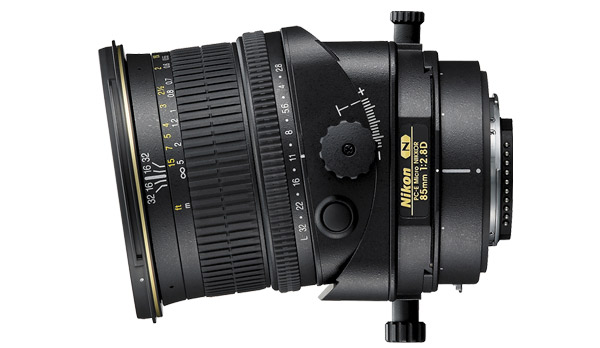 Tilt shift lenses, such as this Nikon, allow for altering perspective to change the image.

Aside from the effects that tilt shift lenses offer, they are often noted for being razor sharp. A number of studio and product photographers prefer them for this near unmatched sharpness and flexibility.

Lensbaby is a fairly new player in the custom lens market. Producing a wide variety of speciality lenses, the Lensbaby line of lenses offers tilt shift type effects for a fraction of the cost. The also offer simple lens designs and plastic lenses for those who want to experience the toy camera effect on their SLR. 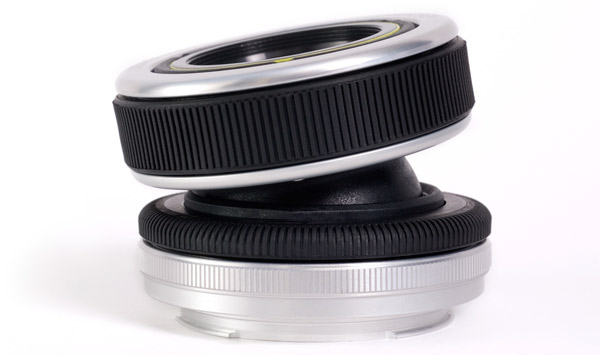 The Lensbaby Composer, shown above, allows for a sharp area surrounded by soft out of focus regions.

We've talked a lot about lenses in our Lens Basix series, but there's always more to learn! Each lens offers a different way of rendering a scene and "painting" a picture. Using a variety of lenses allows you to reproduce a scene that way you see it and allows you to take advantage of the flexibility that an SLR offers.

Andrew Childress
I enjoy writing about productivity software that helps people do what they love, faster. Get in touch at andrewchildress.com .
Weekly email summary
Subscribe below and we’ll send you a weekly email summary of all new Photo & Video tutorials. Never miss out on learning about the next big thing.
Advertisement
Translations