Off-camera flash holds a tremendous amount of potential. With the ability to remove the flash from the same axis as the camera, off-camera lighting gives a photographer more creative options than ever before. Today, we're going to learn about getting started with off-camera flash.

In the first FlashMasters tutorials, we tackled the issues of flash equipment, terminology and our on-camera flash experience. We learned that a combination of technique and flash add-ons can help to really improve the results. However, as long as the flash exists on the same axis as the lens, we will always be bound to fairly simplistic lighting setups.

Why Use Off-Camera Flash? 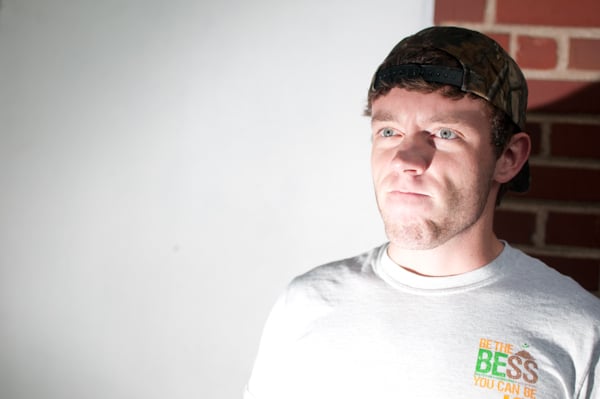 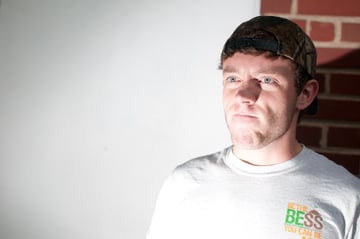 Low positioned flash may provide for a frightening appearance.

Don't let this discourage you! Let's take the pressure off, first thing's first: there is no incorrect way of lighting a subject. The fact of the matter is that each scenario calls for a different lighting approach. Therefore, your a method of lighting a subject can be useful at some time or another. Also, there is almost never a single best lighting style, and your voice as an artist comes into play with each photograph you make.

As we mentioned in the intro, off-camera flash allows us to move the flash away from the axis of the camera. What this means is that our flash is potentially firing from a different angle than the lens is capturing the subject.

Lighting theory can teach us that moving the camera away from the same axis of the lens can help to improve the look of our flash photographs. Lighting the subject from a 45 degree angle is typically agreed upon as a flattering angle. Further, lighting from a high angle is complementary to a subject's look. Throwing the shadow from the chin and on to the neck ensures a slimming look for the subject. 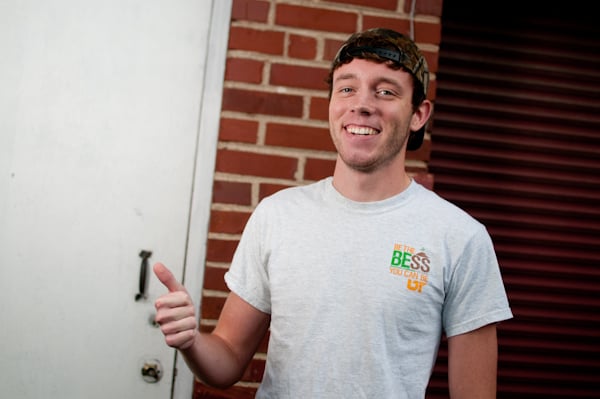 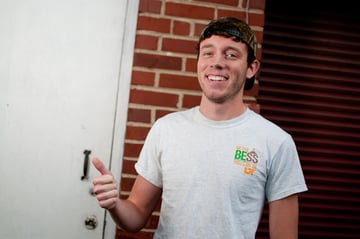 In this photo, a simple high speedlight at 45 degrees relative to the subject provides an easy look.

Finally, off camera-flash opens the door to further light modifiers that would not be possible on-camera. A large softbox or an umbrella would be rather difficult to manuever while sitting atop your camera. Additional modifiers are just another reason for moving the flash away from the camera.

Now that we have decided that we want to free ourselves from the world of on-axis, on-camera lighting, the next step is to decide how. Right now, the time has never been better to get the gear to help us achieve this. The growth of the off-camera flash community, commonly called Strobists, has created a supply of triggering options in the last few years.

Perhaps the most classic method of triggering flash off-camera is to use a TTL cord. This cord runs from the hot shoe of the camera to the flash itself. With this method, we can move the flash away from the camera but are still bound by the length of the cord.

This can be defeated by the usage of wireless flash triggers. Composed of a two part set of a transmitter and receiver, or two transceivers, these triggers are favored by many for the flexibility that they provide.

Flash triggers can be of two types: TTL and non-TTL, the difference being that TTL triggers can transmit the information needed for the flash to automatically choose the proper amount of power, while non-TTL triggers can only cause the flashes to fire at the same time as the camera. 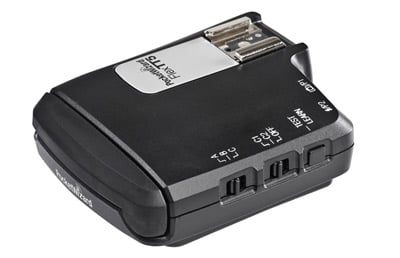 Choosing a wireless set has never held more options, but can be a difficult choice. If you need TTL triggering, be prepared to pay the pricetag. The most common choice for TTL triggering is the newest Pocket Wizard offering, the miniTT1 and FlexTT5. The FlexTT5 can act as either a transmitter or a receiver, with the lower cost miniTT1 acting solely as a transmitter.

With so many solutions available, it can be hard to boil the menagerie of options down to one. When choosing a wireless flash system, remember that you are buying into a system just as you buy into a camera system. You are going to want to grow with that system and add on to it. As you continue to add flash units to the configuration, you will need additional receivers attached to the flash units, and you should ensure that you can continue to purchase receivers that work with your flash units.

The purpose of this article is not to advocate a particular brand or model of flash trigger. My personal choice was RadioPoppers, which I have been happy with. I chose them for their ease of use and reliability and have not been disappointed. The LightingRumours comparison table can help you to choose a solution that meets your needs. 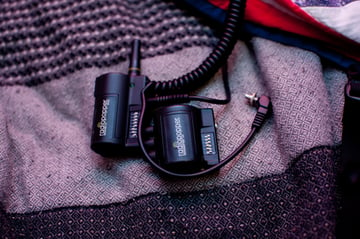 Different cables are required to connect various receivers to various flash units. Consult both your triggering system's manual as well as the manual of the flash unit in order to select a suitable solution. A site called FlashZebra has been instrumental for me as they carry cables of nearly every combination.

The Flexibility of Off-Camera Flash

Now that we have selected a method for moving the flash away from the camera, we should examine the benefits of doing so! I'm going to show you some of the scenarios that off-camera flash has benefitted me the most.

When shooting weddings, off-camera flash became a huge part of my lineup when shooting the reception portion of the day. This is a technique used by hundreds of wedding photographers and can provide for a more dramatic, interesting look than just on-camera speedlights.

At a reception, I will typically find a corner to stash a flash in. Triggered with my RadioPoppers and shot through either a very small softbox or even bare, I have had great results shooting the dance and toast portions of the wedding. Typically, putting the flash on a speaker is a great way to keep the flash safe and undisturbed.

One of my favorite modifiers is a simple white, shoot-through umbrella. This is used in tandem with a flash unit and does a great job of softening the light and increasing the spread. I personally have used umbrellas due to their low cost, portability, and ease of setup. A one umbrella setup has been responsible for a huge portion of my portraits and gives a classic soft light look that is very appealing. A flash used on a stand and bracket allows you to thread an umbrella and fire the flash through it. 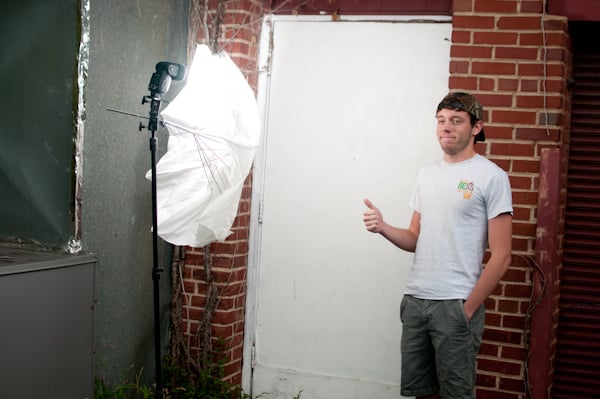 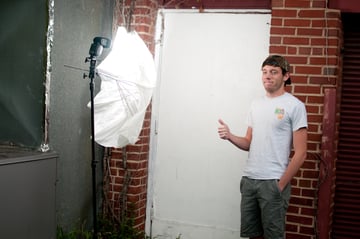 This simple shoot through umbrella was used to create the look above.

In addition to white shoot-through umbrellas, reflective umbrellas are also an option. These are used by firing a flash toward it and using the reflected light to bounce on your subject. These umbrellas can be gold, silver, or even black, and all vary in their effect. The different colors render slightly differing colors of light and shape the way that the light renders highlights. One word of caution: umbrellas can quickly fly away on windy days, so you will want to sandbag your light stands or have an assistant secure it.

Besides umbrellas, another common modifier is the softbox. A typical softbox allows for the flash to fire at an internal diffuser, then be reflected through the front panel onto the subject. Softboxes differ from umbrellas in that you typically have a little better control over the spread of light. This is called "spill control" and means that you are going to be able to better control the excess light that spills outside the modifier.

As the name may indicate, the light from softboxes is sometimes more feathered in nature due to the "double diffusion" that many softboxes offer.

When setting up off-camera flash on an event, you should always take the time to meet with your potential clients to solve any logistic issues. Make sure ahead of time that there will be somewhere that you can tuck a flash without being disturbed. Using sandbags with your lightstands is also a great insurance policy to make sure nothing crashes.

If you are considering taking the flash off-camera, it can sometimes take some additional planning. However, the additional work and gear required to do so can pay dividends in the form of great photos.

Off-camera flash can be a daunting setup, but with research on the right gear and planning, can be conquered. Moving the flash away from the camera opens the door to photographic opportunities that were not previously possible. If you've recently ventured into this arena, please share your experiences below in the comment. Also feel free to share what gear choice you've made, and if you're happy with your choice.