However, we can almost always improve our flash results. In fact, on camera flash is often a necessity in "run and gun" situations where it is impossible to set up expansive off-camera flash setups. In my own experience as a wedding photographer, I found myself being forced to increase my flash mastery. Growing in my skill using on-camera flash allowed me to better cover many situations.

Today, we're going to first look at some of the common mistakes made when using flash, and then examine the fixes to achieve better flash photography.

The Problem with Pop-Up Flash

Nearly every camera has a flash built-in. This small box, typically located above the viewfinder on an SLR, can really come in handy when there is little light to be found. If you are shooting the camera in automatic mode, you will probably see this flash pop up frequently. 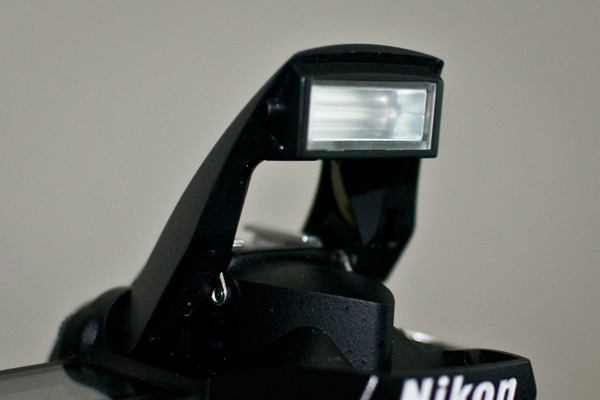 But this flash is not particularly flattering to your subjects. Why is this? A simple bit of lighting theory goes a long way to explain why the "look" of on-camera flash is not always desirable. This theory states that the larger the flash source, the softer the light.

Soft light is a good thing when photographing people! It helps to keep shadows minimized and produces a flattering effect. Simply put, the tiny rectangle of flash is not an ideal source for lighting a subject in the best way possible. 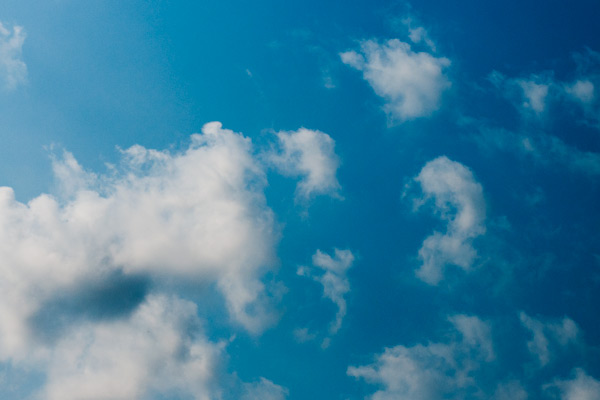 Clouds are a great illustration of this principle. These huge diffusers make for a softer light source and explain why light is soft on cloudy days, and harsh on sunny days.

When it comes to photography, many beginners fall into the trap of purchasing more and more gear in order to achieve their goals. The truth is that some gear does help to problem-solve in flash photography, but technique and DIY gear can also be very beneficial.

First, let's take a look at some of the problems we encounter with flash photography, and methods to fix them. The root of these problems lies in the fact that the camera is just a tool and cannot comprehend every photo scene. While cameras continue to advance in technology, nothing can replace human judgment for artistic decisions.

Modern cameras rely on TTL metering. TTL stands for "through the lens" and means that the camera bases its settings selection upon the scene it perceives. However, the camera has no way of determining the exact scene and the specifics that are needed to create a good exposure. Digital cameras are amazing with their intelligence and scene recognition, but proper photography will always require the human element.

Certain techniques can help us to tremendously improve flash usage. Later on in the tutorial, we will also look at add-ons that alter the spread of light and improve our flash photography.

The most common complaint about flash photography is that it causes your subject to appear lit differently than the environment. This leads to unnatural looking photos and I've even heard people remark that some photos like this appear as if the subject has been Photoshopped into the scene.

Let's pop up the flash and fire a test shot, in automatic mode. 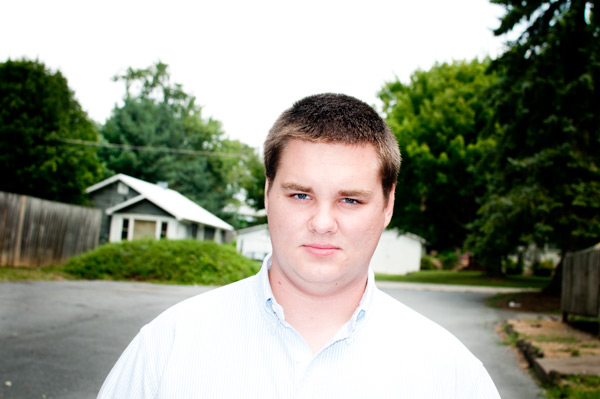 As you'll notice, the background of my scene darker than the light falling on the subject. Hence, we use flash to equalize the light levels. However, when leaving my camera in auto mode, the camera's metering (ability to evaluate the amount of light in a scene) gets a little too aggressive with use of the flash, leading to an unnatural scene.

Time to step back and consider our photo circumstance. Let's tweak our settings to achieve a better result. In this photo, let's think about two things: one, the background is darker than we desire. Two, the subject has been blinded by the flash and appears unnatural.

Flash compensation is a tool that allows us to let the camera choose how much flash power to use, and to still interject our own input about the amount of flash that should be used to create the photo. 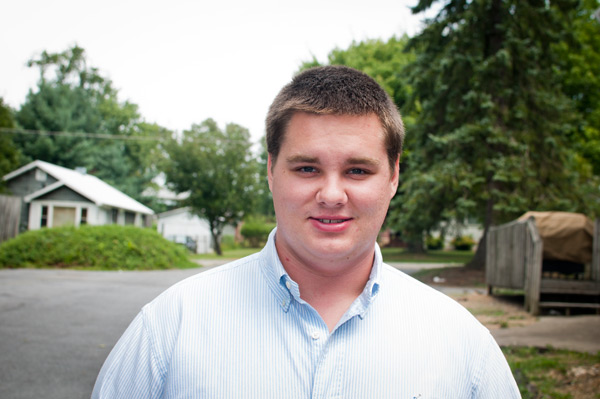 Much better! A much more natural look, even using on-board flash, is possible by using techniques that complement our subject. Envisioning a proper exposure is so key in making great photographs. This is just one example of a great way to reach beyond automatic mode and use the power of a SLR camera.

Diffusing is an essential concept in flash photography. By diffusing the flash, we can increase the spread of the flash and effectively soften the light firing at your subject. With a stationary pop up flash, you don't have as many options for altering the spread of flash, but there are a number of good DIY and commercial options.

Revisiting the concept of flash compensation, it is important to remember that the use of diffusers and any other light modifiers is going to eat up flash power. To compensate for this and not significantly lose flash power, using some positive (+) flash compensation allows us to add back the flash lost by use of the diffuser. With each modifier or diffuser, testing of various flash compensation settings are necessary to ensure proper exposures.

My favorite pop-up DIY option can be made with a semi-transparent canister of film. By cutting a slit in the canister and then running the canister over the pop up flash, I have had good results in increasing the effective area of the flash and creating a better effect than pop up alone. With this solution, I typically add +0.7 or +1.0 flash compensation in order to make up for the loss of light in flash. This option is a good one due to its portability. 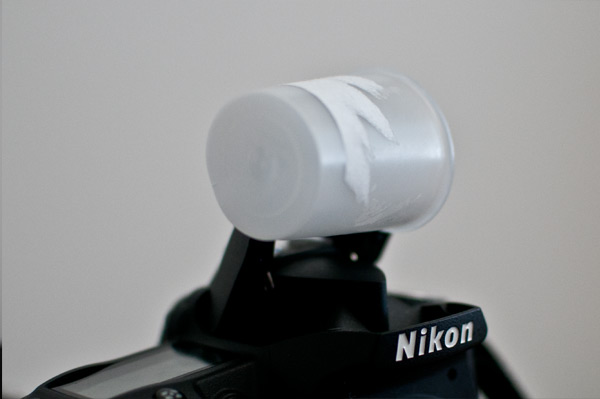 Other commercial options are available without much expense and do not spare much portability. One of the most popular is the Gary Fong Puffer. This attaches to the hot shoe of the camera and sits in front of the flash, spreading the beam and softening the light.

A slightly different approach is utilized by the "Lightscoop". This device brings the world of bounce flash to pop-up flash. With the light scoop, flash bounces off of a mirror device above the flash and onto the ceiling, utilizing the bounce flash technique. 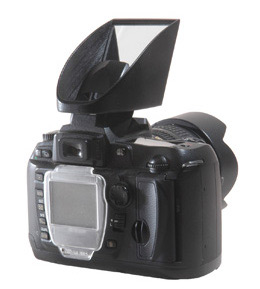 Adding an external flash unit can help us bypass the shortcomings of pop-up flash. Commonly called a speedlight (or speedlite), adding an external flash is a great way to grow beyond the limitations of on-camera pop-up flash. With a speedlight, we have already gained quite a lot on the pop up flash simply by increasing the size of the source of flash. Indeed, the speedlight's flash area is much larger than the tiny pop up flash.

With external flash, the concept of flash compensation still applies. Altering the output of the flash can be used to adjust to the situation. I frequently find myself dialing down the flash's power in order to provide a more balanced flash look.

Furthermore, a speedlight opens the door to a world of techniques that simply aren't possible with just a pop up flash. The most popular of these is using "bounce flash". With bounce flash, the beam is fired at a surface that will reflect the light, such as a ceiling or a wall. This greatly increases the area of the flash, and according to lighting theory, softens the light. Bouncing the flash is a huge step toward better flash appearance. Bounce flash is a great option for indoor flash photography.

Next, a diffuser is an inexpensive add-on that softens and spreads the flash. Many flash units even come with one. This is one of my favorite tools for better flash photography. I use a Sto-Fen Omnibounce and it greatly softens light from my flash. Another effect of the Omnibounce is that flash fires from all sides of the flash diffuser and thus spreads the light far more effectively.

With many speedlights, you have additional power to alter the spread of the beam with a zoom function. You knew that your lens can zoom, but how about your flash?

My flash of choice, the Nikon SB-900, has the ability to zoom all the way from 14mm to 200mm. While the camera will automatically communicate the focal length of the lens to the flash, you can also alter the throw of the flash to control the beam, from a wide reaching spread to a carefully focused spotlight. 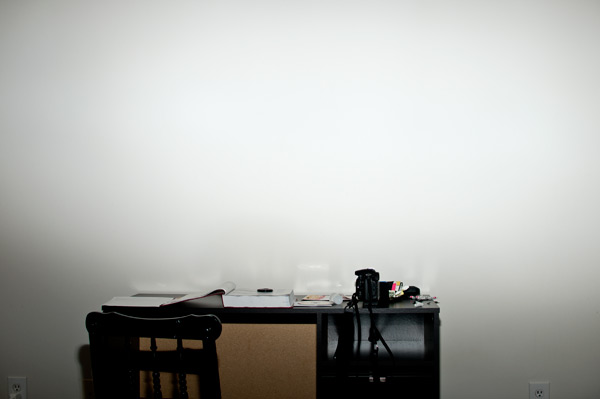 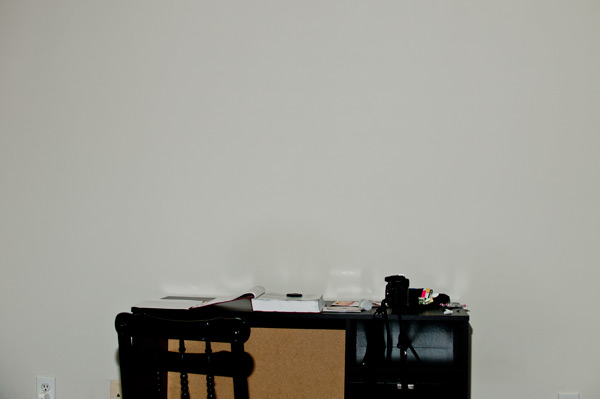 In the first photo, the flash is zoomed to its maximum beam spread, 200mm. In the second image, the beam is zoomed out to 24mm for wider coverage.

Again, as you grow your gear selection and increase the tools in your arsenal, you will also increase the creative possibilities. Growing your techniques and increasing your knowledge of the available options is equally important.

Color is one shortcoming of our flash units. We can change the white balance of the camera to match the ambient light, but the color of light produced by a flash is constant. In post processing RAW files, we can alter the white balance of the entire scene. However, it is very difficult to adjust parts of an image, and many photographers prefer to have a consistent light color. It may become necessary at times to employ an add-on called a gel in order to match the light that is already available. 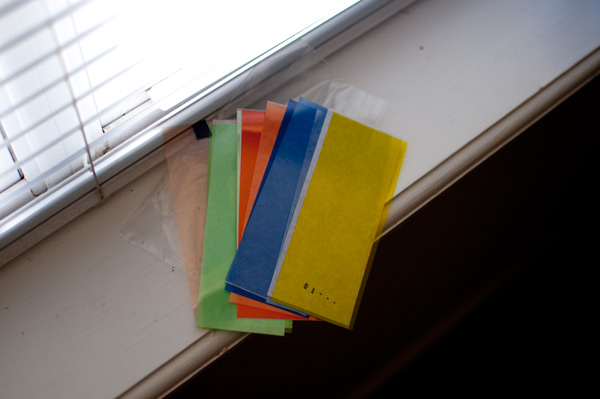 Gels are an essential part of my flash workflow. Matching the speedlight to the available light allows for a homogeneous lighting look.

If you are shooting indoors with the standard light bulb type frequently, the CTO gel can be of great help. Similarly, the CTS gel can be used to warm a portrait or match warm lighting, and I find myself using it frequently in portraits.

Flash photography seems to be a sensitive subject for many. I find too many photographers avoiding it out of fear of the results it provides. In this tutorial, we advanced our usage of flash, both by examining techniques available as well as smart gear choices that enhance the tools at our disposal. Careful practice will flash will add it to your bag of tricks in no time.