Focus Stacking Made Easy with Photoshop

When shooting macro photos, our depth-of-field can be so shallow that we can't get enough of the subject in focus. Even with the smallest apertures, shooting macro can severely limit our ability to capture depth. Today, we're taking a look at a combination of shooting and Photoshop techniques to increase our depth of field beyond what can be done with a single image.

What we'll be doing today is commonly called focus stacking. This technique has us shooting several frames at different focus distances, and then combining them. That means we'll have several photos, each with different parts of the scene in focus, and then we combine those parts into a single frame. The result is a photo with more in focus than can be done with a single photo. 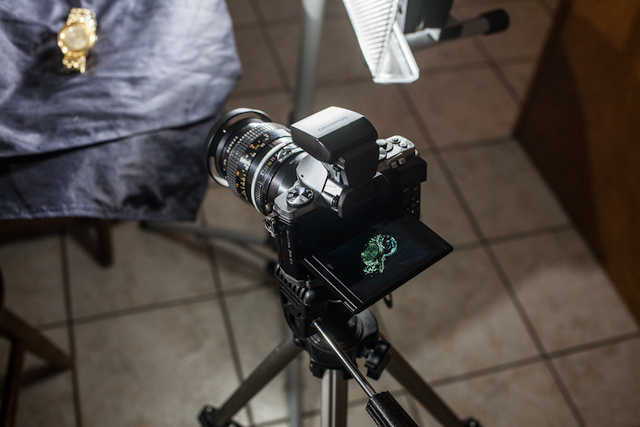 We chose the Olympus OM-D, a micro four-thirds camera with a Nikon 55mm Micro-NIKKOR attached using an adapter. This lens is effectively 110mm given the 2x crop factor, and getting the entire watch in focus required us to use the focus stacking technique we're taking a look at today.

This technique is most useful when using a macro lens. I chose an older Nikon 55mm Micro-NIKKOR f/3.5 lens on an Olympus OM-D. This combination makes for incredibly sharp macro photographs. I used an adapter to use the F-mount lens on the OM-D. One thing to note: the OM-D is a micro 4/3 sensor camera with a 2x crop factor, effectively making the lens a 110mm lens. This long focal length also decreases our depth of field, so focus stacking is incredibly useful in this situation.

I wanted to light the watch in a way that highlighted it, so I used some inexpensive plug-in constant lights (as opposed to flash units) and positioned them carefully surrounding the setup. I used some dark blue cloth for maximum contrast between the subject and the background, and a small piece of velcro to prop up the watch in a way that showed it off best. The watch was inexpensive, but adequate for our tutorial's purpose. 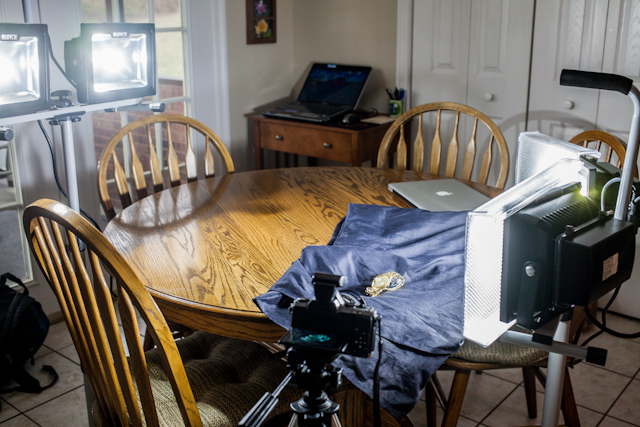 Using some simple constant lights and a piece of cloth as a backdrop allowed us to build a simple setup, even on a kitchen table.

To demonstrate the benefits of focus stacking, I chose a watch as our subject. When the watch was laid out as you often see in product photos, there's some depth to the image from the front of the band all the way to the back of the band. As I mentioned earlier, the long focal length of the lens and the macro setup is going to reduce our depth of field, and therefore focus stacking is a great technique to use. 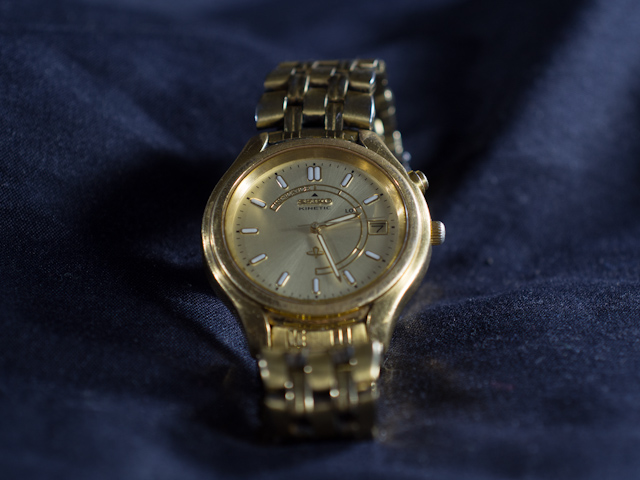 This image shows that our depth of field is too shallow. The end of the tutorial will show how focus stacking can get more than just the face in focus.

After some consideration and testing, I decided that it would take six images to properly capture the depth of field that I wanted to achieve. My goal was to take separate frames with a different part of the watch in focus, and then combine them in the post production process. 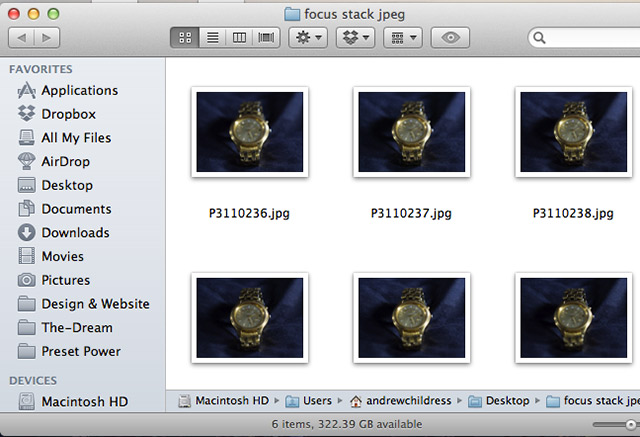 In the end, I made sure that I grabbed six frames that had different parts of the watch in focus. Focus stacking them in Photoshop would give me one combined frame with the entire watch in focus. 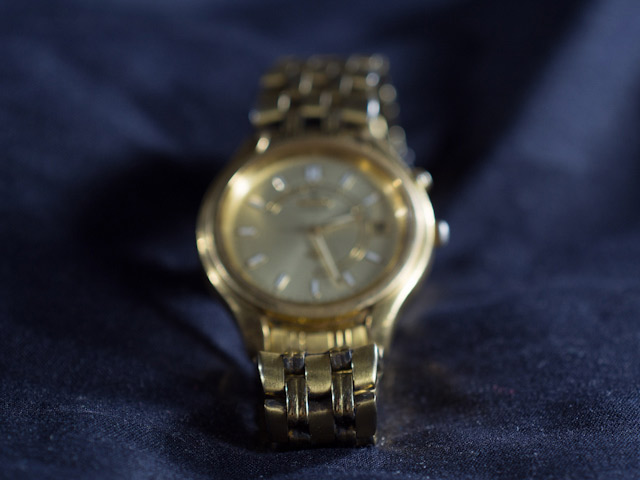 The first frame we grabbed also shows that each frame doesn't have the entire watch in focus; here we see just the front of watch band being sharp.

Again, the idea here is that each individual frame doesn't get enough of the watch in focus, but six combined frames can give us a simulated unlimited depth of field. Getting enough frames in the shooting process is essential to making sure that the post-production goes well. The images were shot at f/5.6 to add sharpness and a bit of depth of field, but even stopping down further when shooting macro is often not enough to increase the depth of field to a usable level.

It's essential to use a tripod, and attempt to move the camera as little as possible while grabbing the frames. Photoshop has a great amount of power in aligning our images, but it's always the goal to get as much right during the shoot as is possible.

While there are plenty of viable options, Photoshop has great features to use when you're focus stacking. In just a few minutes, we can put together the final, focus stacked image.

First of all, we want to make sure that we have all of our images on our computer in the same folder. I like to put all of my images to be stacked into a folder of their own.

Next, start up Photoshop and we can begin the focus stacking process. On the "File" menu, go to "Automate" and then choose "Photomerge." This gets all of our images open and into the same document in Photoshop. 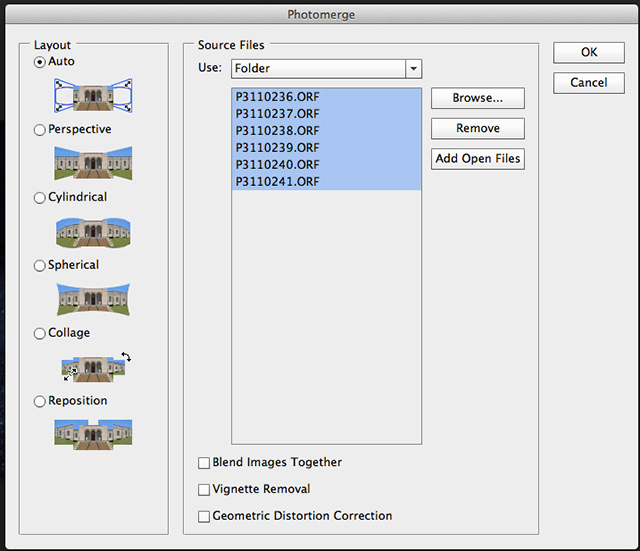 Leave the Photomerge options set to "Auto" for layout, and ensure none of the boxes at the bottom are checked.

When the Photomerge options pop up, point it to the folder where the images are stored. Leave the option on the left set to "Auto" and then uncheck the option to blend images together. After pressing OK, Photoshop will go to work aligning and putting the images into the same document.

This might take Photoshop a few minutes, but when it completes, you should have a new document that has all of the images open in the layers palette. There's just one more step to get our images focus stacked. 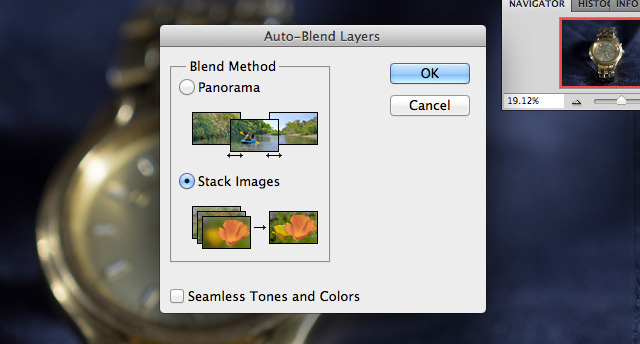 After making sure that all of our layers are selected, we use Edit > Auto Blend Layers to bring up the option to focus stack. We leave the setting on "Stack Images" and it automatically handles the focus stacking process.

On the Auto Blend Layers menu, and choose "Stack Images." Again, press OK and Photoshop will work on doing all of the focus stacking work for us. After Photoshop completes its work, you can see the results both in the form of the final image and the layers palette on the right side of Photoshop. You'll see that the masks have automatically aligned and that Photoshop intelligently sampled which layers to mask into the final image. 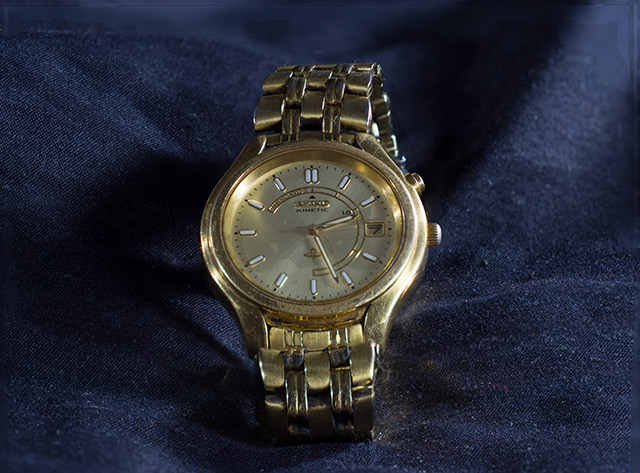 The final image features a good look at the power of focus stacking. Compared to the earlier images where just a small part is in focus, the entire watch is in focus. Focus stacking gives us the power to increase our depth of field through simulation. 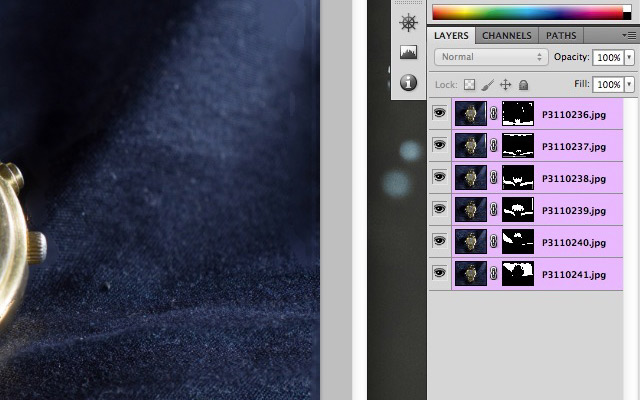 Photoshop relies on masks to paint in the focused parts of each image. The automated process prepared my layers perfectly with each mask drawn in. Photoshop intelligently chooses which image contains the focused part of each frame, and then combines them.

Photoshop does almost all of the work that's involved with the focus stacking process. The only downside is that if you aren't pleased with the outcome, it's hard to adjust the automatic assessments that it made. Still, I think that the built in capabilities are extremely powerful and arguably the best way to get to a simulated depth of field.

Focus stacking is a unique technique that lets us get a seemingly impossible depth of field. With a series of images and a little post production magic in Photoshop, gaining additional depth of field is easily doable with just a few clicks. Photoshop is an advanced application that can intelligently align our images and apply the masks automatically.

MacroFocus StackingCompositingAdobe Photoshop
Did you find this post useful?
Yes No
Would you like to provide feedback (optional)?
Cancel Submit
Want a weekly email summary?
Subscribe below and we’ll send you a weekly email summary of all new Photo & Video tutorials. Never miss out on learning about the next big thing.
Sign up