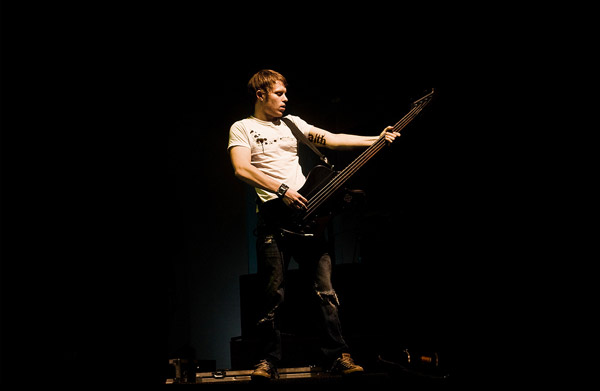 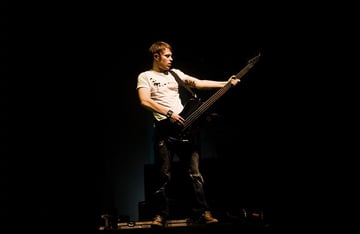 Here are four of the most useful and insightful pieces of feedback given on this photo, taken from the comments:

The lighting is nice. I appears you have a single light source from above which is creating some dramatic shadows, yet isn’t too harsh. The skin tones aren’t blown out, and you have some nice earthy colors in the body.

I also like the dark vignette around him—he really stands out in a dark atmosphere.
The sharpness of the image is great. Despite the low lighting, he is in total focus, and the details are sharp.

Your model looks like an interesting character. The tattoo poking out the sleeve gives credibility to his rock-ness, so including it in the image I think helps out.

What to work on:

Although I like the dark atmosphere, I think there is way too much of it. I’d crop down this photo quite a bit—maybe a bit more off the left side than the right, which brings me to my next point:

The model is too centered. The rule of thirds is made to be broken for sure, but in this photograph I feel like the composition is just too static.

Ultimately the photo is a bit boring—this guy is a rocker, yet he is just standing there, I don’t get the feeling that he is actually playing. I think if his pose was a bit more dynamic, plus if you shoot from a different angle—maybe from below, or from up on a ladder you’ll give the viewer a much more unique perspective.

I always try to ask this question—“What would make somebody want to look at this photograph a second time?” And for this photo I don’t really have an answer to that. This may be a bit harsh, so I mean it in the most constructive way possible—I’d really play around more in your next session.

Here’s something I haven’t seen mentioned and might help with everyone’s desire to un-center the subject.

Part of what is weird is how the subject’s feet are on a flat surface, but the whole photo is slightly tilted. By slightly rotating the image and just a little bit of cropping you can keep him in the middle and it doesn’t feel so awkward.

Suddenly he’s more commanding and the center placement feels grand rather than clumsy.

I like the lightning of the subject in the photo, but in my humble opinion this is no composition… Everybody with a good camera and some camera knowledge can take this picture (with some luck maybe). Like said before cropping would do great and make the difference. I think there are a number of ways you can crop and make it look good. Now it’s just ‘a’ photo….

Alltough you speak of an action photo, there is not much action going on, its to static… cropping would also solve this.

Overall it’s a good picture camera technically speaking, composition wise it’s not.
It also seems that you are listening to the critiques given but always answer with ‘tried but didn’t liked it’. It seems you didn’t try enough

Nice photo, Jessica. You’ve captured the subject well and the light is good. I do however think that the image could do with some cropping.