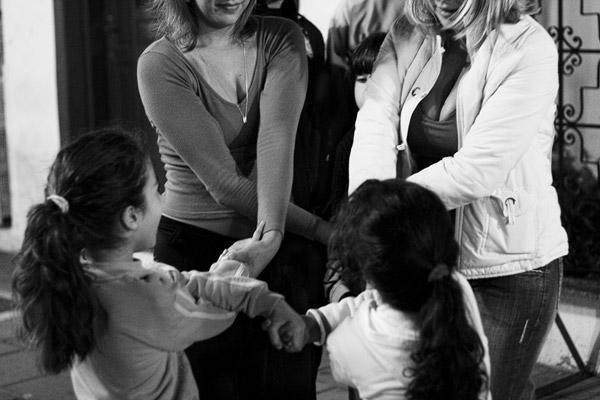 Here is a selection of the most useful and insightful pieces of feedback given on this photo, taken from the comments:

I’m not one of those people who think it’s a cardinal sin to cut off limbs and whatnot, but I think one fairly obviously flaw here is the composition. Cutting the women’s heads off in this way, together with the focal plane and the shirts the women happen to be wearing, makes this photo about cleavage and girls having fun spinning – an odd combination. I’m left thinking, “What’s this really supposed to be a picture of?”

I think if the focus had been on the girls instead of the women, even with the same framing it would have been a much better shot. Or better yet, much wider framing.

As a viewer it’s hard to find the focus on your story. There are to many subjects and I don’t realy know where to look, what to see. Did you want to shoot the hands; did you want to put emphasize on trust, happiness, innocence or all?

There are also few other kids on the background and many other distracting objects.
I think you have just taken the camera and pressed the shutter without any ideas what to shoot for. You’ve just seen a great moment. Sometimes capturing the moment is not good enough. You have to try to capture the moment right.

Here you could have lessen the distraction by using a wider angle; maybe moving back one or two steps would have helped.

The other thing you could have done was to capture one or two faces in full – preferablly one the kids face.

Contrary to everyone else, I thought cutting off the heads is fine. This composition emphasises the connection made between the women and the children through their hands, and cutting off the eyes eliminates the distraction of yet another subject to focus on. The jacket the woman wears on the right is quite glaring though and is distracting.

Try shooting from between and behind the women. That way you could see the faces of the two girls being framed by the mothers, their hands, and the little girl poking her head through, while eliminating the glaring jacket – since the light is hitting them front on, the jacket would be darker shot from behind than in this picture.

Critique: The focal point looks like it should be on the hands, but the dark patch and the patterned angles treeing off the center point lead my eye up like from a fire to the sky. I agree with Jessica (above) – The moms needed to cover up a bit more. The background is busy. I all but missed the 5th person in the photo.

Opinion: I instantly thought wouldn’t that shot look awesome if posed and taken from the top down with their heads being slightly cut off around the outside of the image, but with their heads tilted up a bit so you could see them all laughing/smiling.

Praise: This image really captures the ‘fun’ and you can almost see the togetherness. It’s warm and family focused. It looks casual and natural.