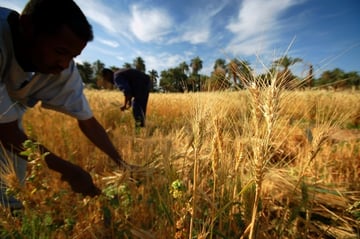 Please let us know what you think in the comments - how would you have approached the scene or taken the photo differently? A massive thank you to everyone who commented last week. The post will shortly be updated with some of the most insightful comments.

Here is a selection of the most useful and insightful pieces of feedback given on this photo, taken from the comments:

In this photo i would’ve used flash to light up the person in the front. Maybe a reflector from the right side would help to light up the in the front person. The person in the back should be placed somewhere else in my opinion, maybe a bit more on the right side of the picture. The focus is completely wrong here, there is too much focus on the corns in the front. I also think it would be better to change the apparenture a bit to get a better depth of field. In my opinion the camera angle is a bit boring, more of a “Frog” perspective rather than a normal perspective would be much more engaging to look at.

The wheat appears to be pretty sharp, but everything else looks soft. Not “artistic shallow depth of field” soft, but “whoops i screwed that one up” soft. If it IS intentional, its a little too subtle.

It would appear the view angle is relatively wide, but the lens used to get that angle was an extremely cheap one thats just unacceptably soft at the edges and corners. But again.. the wheat is pretty sharp, even clear over to the edge of the frame. Assuming this was not cropped, then I’d say either stop your lens down to keep your fore-most harvester-guy in focus, or open it up to decrease the depth of field and lose more focus on him.
Also couldn’t hurt to setup a reflector or softbox or something to throw a little more light on him, if indeed he’s meant to be an important subject in the photo, along with the foreground wheat.

I really like the colours and think you did a good job of making everything look so calm and pleasent.
I might have also lowered my camera, in order to make it look like you were looking up to this man, showing his importance in socitey. Though this might be slightly over the top...

Overall I quite like the photo and see what you were trying to do but think a photo of the actual person would have been more intresting and appealing.

First, the subject. This is one of the issues that I sometimes struggle with in my work, but I now think about more even without my camera. If you are going to include everything, then do just that. Pull back and capture everything that interested you from the start. If you want to focus on one particular element of the image, then focus only on that one thing. This image clearly has to many elements and is not very clear on what’s most important. Focus on what is most important and add one extra element that enhance the subject.

Two, the wide angle lens is not best for this image. A standard 18-35mm would hit the sweet spot. You may have opened the lens up some more to get more light from the people and more bokeh for the background.

Last, use monochrome/duotone. This would deliver impact, something that is totally missing from this image.

And a great response from Tom Allen, the photographer

Thanks to everyone who left constructive criticism. This is exactly what I was hoping for. All of this advice is really useful, especially the suggestions of using a fill flash – that’s going to be next on my shopping list. Also the comments about changing the subject and the angle are great advice. I’ve taken it all on board for next time.

A little bit about the photo itself. I’m a hobbyist photographer with a lot to learn. The photo was taken under less-than-optimal circumstances in northern Sudan. It wasn’t posed – these villagers were harvesting their wheat in order to eat later that day so I had to find and capture a composition quickly before all they finished their work. I was also on the road myself, on a bicycle journey through the region, when I came upon this chance meeting, so wasn’t carrying a large range of lenses, reflectors etc.

None of that is an excuse for a flawed image – just a bit of background info to put the photo into context. It’s good how no context is included in the Friday Critique, though, as it allows the image to stand on it’s own two feet (or not!).

This has been really helpful to me. Huge thanks again to all who commented (and to PhotoTuts+ for featuring the image).

Photo Critique
Did you find this post useful?
Yes No
Would you like to provide feedback (optional)?
Cancel Submit
Want a weekly email summary?
Subscribe below and we’ll send you a weekly email summary of all new Photo & Video tutorials. Never miss out on learning about the next big thing.
Sign up