So you've got some great photos and want to print them. Think great prints are as easy as hitting the "Print" button? Think again. Here we'll talk about the two different color spaces photographers deal with in the capture to print workflow. After this, you'll see that things aren't so black and white — or red, green, and blue.

Photographers have dealt with two cities of color since they could print what they saw. Color film captured light by filtering it through three different colored layers before it reach the light-sensitive silver halide crystals in each layer resting upon the celluloid (plastic). These filters were Red, Green, and Blue. Once developed, the color negative contained varying layers of density of the RGB. Looking at a color negative through a loupe, you can see the reds, greens, and blues.

Color film captured the world in RGB, but a much older form of reproduction had already established its way of displaying color using Cyan, Yellow, Magenta, and Black (CYMK). The printing world, from the moment it could produce color images used the CYMK colorspace to make their color images. Instead of using filters, printers use layers of ink at differing densities to make color. 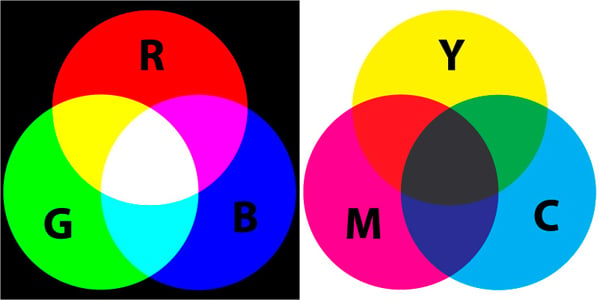 Since these two worlds interact with one another during the capture-to-print workflow, it is important to understand how each relates to the other and the limits of modern digital photographic capture and printing reproduction. Although each can replay the same colors we see, each captures it in very different ways — much like two people speaking different languages.

The RGB color space is reserved for sources that emit light and is based on the additive color model. This means that the more color you add, the closer to white you get. It is the same principle that governs a rainbow. If you were to add up all the colors of the rainbow in equal parts and to their maximum luminosity, you'd end up with white light. White light is just the sum of all the colors. In RGB color, it's each channel maxed-out.

When you open up an image in Photoshop, or any image editor, you can view the image's color information. This range is unaminously designated per channel as 0 to 255. Zero is no light and 255 is maximum light. If R=G=B at 255/channel you get white. The different colors you see are merely different number combinations.

Each of these color spaces is represented by 0-255, an absolute value of light output, but the range of their output varies greatly. 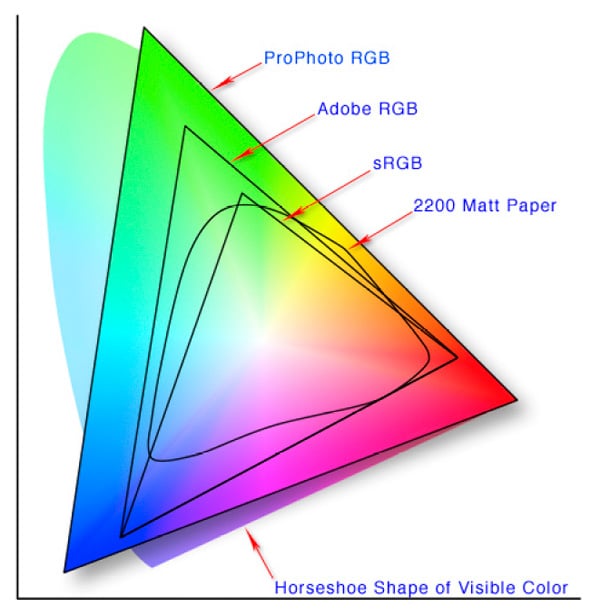 ProPhoto RGB has the largest gamut (range), Adobe RGB is in the middle, with sRGB being the smallest, but most commonly used. sRGB is popular because it is the color space which is easily within the reach of most computer monitors, televisions, and projectors.

Most digital cameras offer to capture and represent color in two color spaces: Adobe RGB and sRGB. The wider gamut of Adobe RGB allows for more color to be available as well as increased flexibility in manipulating color. If you capture in sRGB, you've already limited your color rendering ability by at least 30%.

If you have the option, set your camera's color space to Adobe RGB or the color space with the widest gamut available. This will give you more color information to work with in post production. 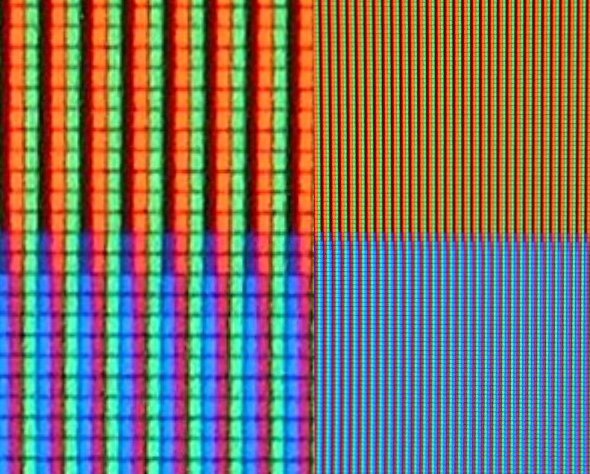 The CYMK color space is the opposite of RGB because it uses the substractive color model to express color. This means that the more color added, the closer to black one gets. This is the color of printing and the world of reflected light.

The CYM filters on enlargers used in color film photography for printing use this system to control the overall tint of an image and get the colors to separate. The "K" in color film printing is the length of time one exposes the paper, controlling density and detail.

The digital darkroom continues the tradition. The "K" for black ink, which is used because the maximum of CYM alone doesn't produce a "true" black, but rather a very, very dark gray usually lacking detail. The black ink is the final touch which adds detail and contrast.

To see the relationship of RGB and CYMK in Photoshop, open up the "Color Balance..." adjustment layer. There you will see the digital version of the traditional film enlarger. Moving the slider for each will adjust the overall tint of the image, just like in color film photography. 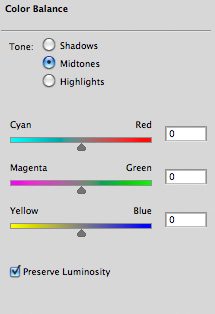 Another way to see the interaction of RGB and CYMK color is to check out the "Info" panel in Photoshop and see how RGB values and CYMK values interact in real time.

When dealing with inks, one must understand that there are more factors introduced in the printing process than just a particular combination of CYMK. Paper weight, type, finish, printing process, and more all play a role in representing and cannot compete with the comparatively huge gamut of RGB and even less so with the color gamut of the human eye.

The further you move away from the eye, the more information is lost. In fact, what we see is a filtered version of the original.

Something is lost in the transfer of color information, and the more it's transferred, the more unfaithful it becomes. Think of it as ever-shrinking circles of range. Each process shrinking in its ability to represent its predecessor.

Take a look at the image below to see what I mean:

When the RGB and CYMK color spaces are lined up, you can see that CYMK cannot represent all the colors found in RGB. Certain tones flatten out while others hold well.

This difference is not just due to the differences in color models or mediums used (light vs ink), but also how the colors are numerically represented. RGB uses an absolute number, a whole positive integer, to define color. CYMK uses percentages of density for each color as well as an overall density percentage. Also, unlike RGB, CYMK isn't limited to a maximum of 100% for overall density of color. No matter how vibrant or whacky the color is, RGB can only go as high as 255.

One of the reasons CYMK can go over 100% ink density is due to the ability of printers to use more than just a 4-color process. It is actually the limitations of the colorspace that require it to be able to go over 100% overall in order to better represent the color and density of RGB. This is why high-end photo inkjet printers use 6, 8, 10, or 12-inks.

When printing, there are tons of factors at play when trying to match color that is representative of the original, not just the color space alone. It is a whole new ballgame when you get down to the actual printing process.

The photographic process is an amazing journey in the discovery of color. We strive so hard to replicate and at times manipulate the color our eyes see. Digital technology has allowed us to do these things faster and easier than ever before. Things are less manual nowadays, but they do not circumvent the necessity of understanding the guiding principles of the process. Photographers have always contended with these two worlds of color since the printing images is so important, especially before computers.

Now that we've scratched the surfaces of the RGB and CYMK color spaces and how they relate and interpret color, we can move forward to the printing process itself. In part 2, we'll go deeper into the printer's world, get some advice from master printers, as well as learn which kind of printing process works "best" for photography.

Daniel Sone
Daniel Sone is a professional photographer who specializes in documenting the human journey. His backbone is photojournalism and portraiture, and brings those skills and methodology into his wedding and commercial work. He enjoys finding ways to do photography as quickly as possible without sacrificing the quality his clients expect. Over the past 15 years -- 13 as a professional -- he's worked in news, wedding, and commercial fields, blending them while staying true to his vision and the story.