Getting Gorgeous Shots From Plane Windows

They say that half the fun is getting there. What better time to start shooting photos of your holiday than on the airplane shuttling you to your adventure. Here are eight tips to help you make the most of the opportunity to shoot the view out your plane window.

Often passengers pick a seat on the plane depending on how early or late they want to board. On discount carriers the choice is often to pick a seat near the back in order to assure there is overhead space for a carry-on bag. Of the numerous criteria that go into choosing a seat, 'best photo position' is not usually near the top of the the list. 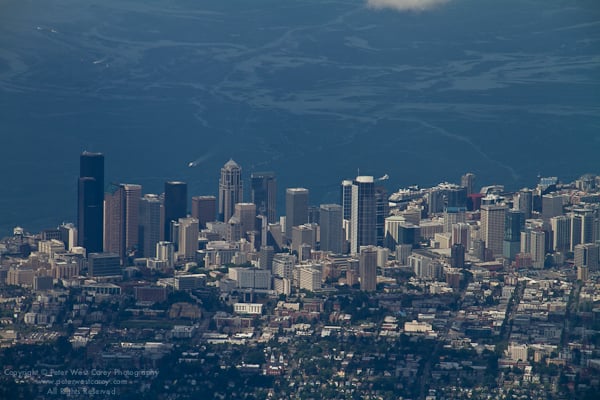 For best views without a wing, choose a seat as far forward as you can. Given the option, your next choice is to pick a seat further back, not in the middle, of the plane. Avoid the seats on the wing or even just back from the wing (remembering that the wings sweep rearward). These are the options usually available in coach, but if you have the chance to fly first class, take it, as there is no wing problem (and free meals).

Pick a side! To choose a side, you need to know your route. For most flights overland, this is a fairly easy task. Go to your airline's website and look for a link to “track a flight." Or, you can use a general site such as Flight Aware and choose your scheduled flight number on a different, earlier date (they have historical data for the last couple of weeks). This will show you the intended route as well as the route your flight took the day of your search (if your flight flies daily, otherwise you may need to check on the appropriate day of the week). I know this might sound a bit nerdy, but it can help. 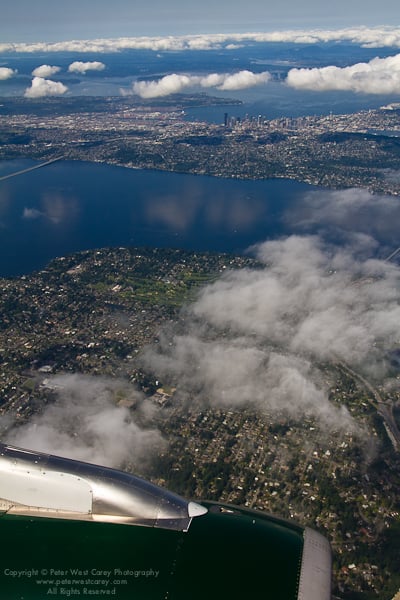 Check the route on the website and mentally make some notes. Then skip on over to Bing Maps, Google Maps or your site of choice and mentally lay the route over what you see. It's easy to zoom in and find your departing and arrival airports as they are usually outside of town and in somewhat open space. This gives you the orientation of the runways. From here, it's a bit of a guessing game as to which way flights will take off and land on the day of travel.

Look for known landmarks in the area and ask around on the internet for likely subjects. For instance, I know here in Washington state, when taking off from Seattle-Tacoma International airport and heading south, you want to be on the left side of the plane to get great views of Mt. Rainier and other mountains. But if I was flying to San Francisco, I know that the best views of the city on approach are typically on the right side. 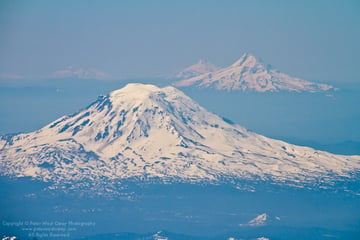 Sometimes you can't guess right as wind patterns will decide departure and arrival path, but more than half the time an educated guess will afford you the best views.

While grand city shots are nice (as long as you are not disobeying the "turn off all electrical devices" announcement), some of the best shots while flying are zoomed shots of mountain peaks, shoreline or endless fields. This is sometimes the only option when seated just back from the wing. It may be that the wing is obstructing most of the view, but if you are given a sliver of Earth to view, use it. 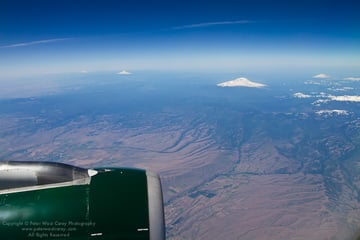 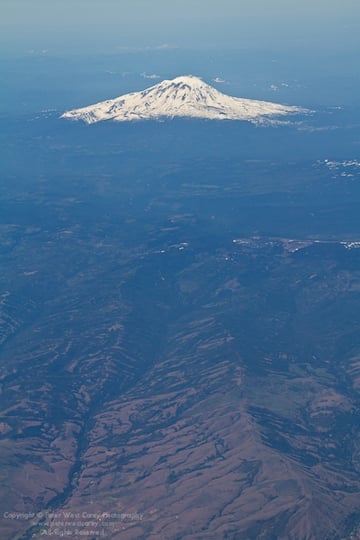 An important caution here is to remember that the plexiglass through which you see the world is not intended to be perfect for photographic purposes. It's intended to be perfect for maintaining cabin pressure. This means the multiple panes of plexiglass that make up the window will distort views as you move further from center. Trying to glance downward, below the plane, will cause unwanted blur.

Often there is nothing to be done about this effect and zooming in will distort the blur even more. My suggestion is to see if you can view out and to the rear of the plane, behind the wing. Sometimes your seat will put you directly over the wing, then your best chance is to hope the moon is out or wait until the plane banks for a turn in your direction.

When at all possible, block the light coming from inside the plane. Most shots out a window will be at a slight angle to the plexiglass. That means some light can bounce off the window and get into the shot.

Use your hand if you have no other item to block light. In an ideal situation, you will have a black cloth, like a scarf, to seal out the unwanted light. Magazines from the seat back often work in a pinch and so will the blanket you might have been given. Blocking out the light is especially important as night beings to fall and inside lights cause even more reflection and unwanted glare.

Pressing your camera lens flush with the window can also help block out light if you have no other options. It is often less desirable, though, as the vibration of the plane can cause blur and your angle of view may be less than ideal.

Sometimes it helps to put a shot in context. Sure, most people will know the photo you bring back of the Grand Canyon was taken from the air. But at times it is hard to get the proper angle downward when the window distorts objects as they get closer to being directly under the plane. In these cases, when the shot you want doesn't look how you want it, pull back and bring in some of the airplane interior.

This method, of filling part the frame with the airplane window and the rest with cabin space, can be very useful with a wide angle lens of 20mm or less.

Sunrise and sunset may pass quickly or last an hour depending on whether you are flying east or west. This is another time when choosing your seat matters. In the summer, for instance, if you are flying from New York to Los Angeles, you will want to be on the right side of the plane to catch the setting sun's colors. Yet, in winter, you will want the other side of the plane.

Sunrise and sunset above the clouds is an awesome sight. Often the colors are more vivid and blues are more apparent than they are on the ground as there is less pollution at 30,000'. If your camera has a sunset setting, use it, as it will enhance the colors. If not, make sure you meter your light off of the sky, not the clouds below (if there are any). Metering off of clouds will tend to make your sunset too dark.

If you need help finding out which side will be best, I prefer a great tool known as the Photographer's Ephemeris. It will show you the position of sunrise, sunset, moonrise and moonset for any point on the globe. Here again, a sight like Flight Aware can help show you the likely route between your departure and arrival cities. 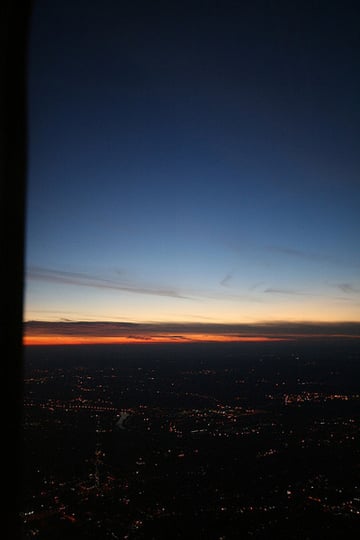 Use The Window As Frame

Why not use the frame you already have to line up your shot. This is a bit like shooting inside and out but narrows the focus and scope of the image. It's also an image many of us know well. This shot will not work well at night as there will be too much glare if the cabin lights are on. Otherwise, shots during the day give a greater sense of distance to the ground and loftiness.

Let's face it, you won't always get a prime seat near the front of the plane, free from the obstruction of those wings which are carrying you to your destination. And there's no reason to exclude them all together. For one thing, people viewing your images will know you are on a plane and are not expecting National Geographic quality images taken from a plane with no doors or obstruction. 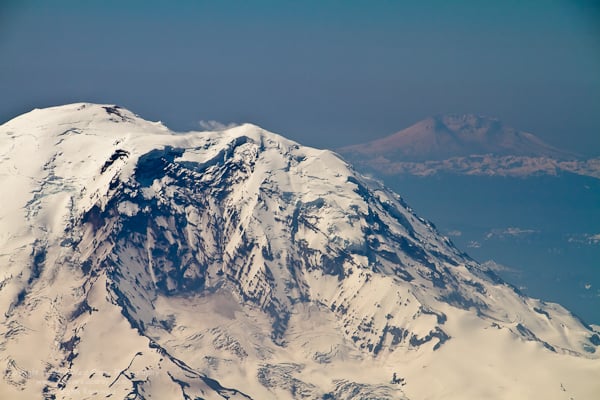 Secondly that wing tells a story and helps bookend your trip (if your trip includes air travel). Including a shot with the wing somewhere in the picture at the beginning and end of a holiday gives a sense of start and end to an online slideshow of your images, if you choose to share images that way.

Why not make the flight to your next holiday or business meeting something more than just a way to get from A to B? Take some shots out the window and let your camera help you see what you normally ignore.

Many of us have these types of shots. Share links to your images in the comments below!