Gitzo Systematic Tripods, a Review and a Shoot

Today we're going to take a little different approach to the review. We're going to try it out as a photographic subject, as well as a tool. That being said, the Systematic tripod range from Gitzo has been redesigned, with smaller travel tripods and new features in both carbon fiber and aluminium versions. Let's take a look.

Gitzo: a facelift on the Systematic tripod

This is not just a tripod review. It's also a lesson in product photography and a challenge for readers to try it at home, with any subject. As we'll show in this article, the new generation of Gitzo Systematic tripods can also be a photographic subject.

Photographing a tripod can be a lesson in the use of light to convey what is not seen under normal conditions.

How it all started

There comes a time, sings Neil Young, and I guess the time was now. That's how it all started... me photographing tripods. It all started with an email from Gitzo. They have a new version of their Systematic tripods and would like for me to try one and tell them what I thought. So they shipped me the new version, a brand new GT3542LS, and a kit of the old version, the GK3580SQR, built upon the GT3530LS tripod with the Systematic Ball Head Quick Release GH5380SQR.

The new and old Systematic tripods from Gitzo arrived through the post.

This new series has just won an award at the 2012 edition of Red Dot Design Awards, one of the world's most prestigious design competitions, so Gitzo has reasons to be proud. Gitzo’s new Systematic range, launched in January 2012, was selected by the jury from a total of 4,515 projects, submitted by designers and companies from 58 countries, making the recognition even more significant.

Gitzo Systematic tripods are at the top of Gitzo's line up when it comes to solutions that are both strong and stable besides offering flexibility of use. The name of the series, Systematic, suggests the adaptability of these tripods to different needs, both in video and photography, and in areas that range from outdoor photography and macro to sports or studio work.

Available in 6X carbon fiber and aluminium tubing, the series sees, in this new version, the aluminum tripods upgraded to offer the same features of the carbon models. So the usual Gitzo characteristics of Anti Leg Rotation system (ALR), G-Lock, removable self locking feet, three leg spreads and new upper platforms are common to both types of materials. These new platforms allow for a more solid connection of the head and reduced vibrations thanks to the safe lock techno polymer disc and a locking screw for the head. 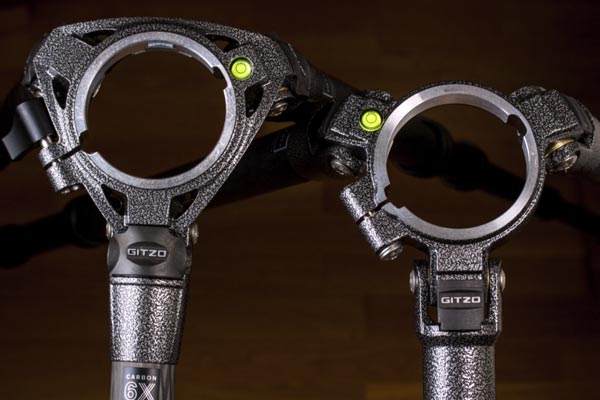 The new design of the top casting (on the left) offers more stability to the Systematic tripods.

Systematic's modularity is based on the top casting element that opens and closes to allow each tripod to be configured with a flat disk, geared or sliding centre column, video half-ball adaptor, leveling unit or other specialized centre component.

Up until now Systematic has been, within Gitzo, the choice of professional photographers who use long lenses and heavy cameras, and it started at Series 3. But in this redesign, the Systematic range has been extended to cover Gitzo Series 2 in order to offer the advantages of mechanical strength and build quality at a more portable size and weight.

The new built-in ratchet makes it easier to change heads.

My take on these tripods

So, I had a GT3542LS new tripod and an old GK3580SQR kit with a GT3530LS Series 5 Systematic Ball Head Quick Release GH5380SQR that I can use in both models. It was easy to spot differences: the new model has four leg sections and is a bit smaller, when closed, than the old one, and the top casting, where the head fits snugly, is now triangular, apparently to give more support to the whole system.

The little difference that I felt was more important was the inclusion of a ratchet locking lever that is now used to close and open the top casting quickly and easily, to change the head. I know this is not something one does every day, but having the "key" always on the tripod can make a difference from having to carry a wrench along with you. I know I am always misplacing those little things, so it's good to know it now makes part of the tripod and goes with it everywhere.

Also, Gitzo has now placed a safety latch on the base of the head, so even if it's open, the head does not come out unless a little button on the underside is pressed. Nice. 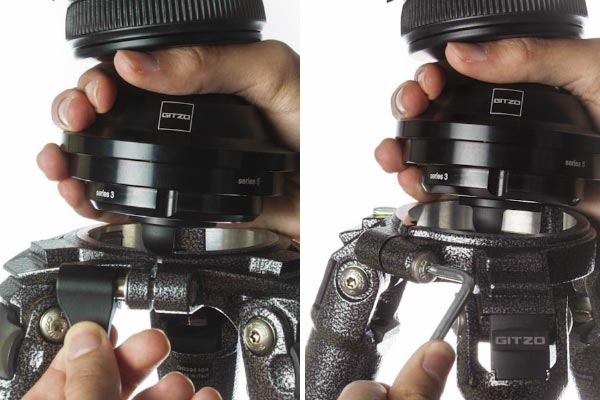 With the old system (right image) you need to carry a wrench along with you all the time.

The system has 4 series, from the new and more portable 2 to the heavy load 5. The tripods I received for testing, version 3, are somewhere in the middle, offering, as the catalogue states "excellent overall performance with great torsion rigidity, in a size that makes it particularly flexible and adaptable, Series 3 is ideal for use with lenses up to 400mm. Available in 3 or 4 section models, each in either standard or long versions, or an additional extra-long 4 section version." It's, by its nature, the most common choice amongst wildlife and landscape photographers, taking easily lenses up to 500mm or more, even if Gitzo suggests a comfortable 400mm. 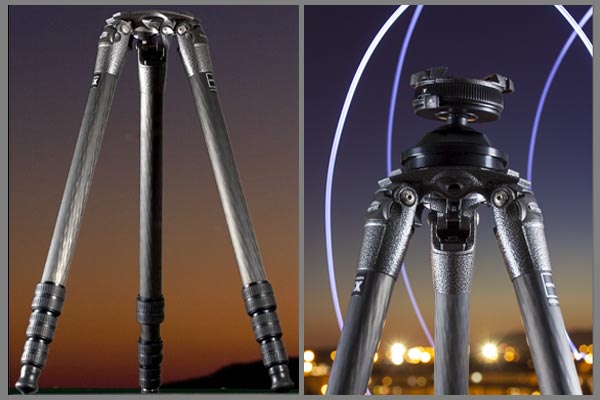 Suddenly a whole collection of pictures of tripods began to take shape.

It has rubber feet that hide built-in, one piece spiked feet. The legs can be opened all at once and also close easily, and can be positioned in various manners due to the new leg angle selectors. It offers more grip room to make tripod setup and adjustment easier, and it has strong hook under the head.

The Gitzo Systematic tripod is about to become my tripod of choice from now on. I particularly like the Series 5 Systematic Ball Head Quick Release GH5380SQR I tried with it, although I have to think of getting another quick release head, probably the Series 3 GH3780QR ball head, that enables me a wider angle of movement for lenses without a rotating collar. But for now this sturdy, rock solid head is all I need to work. 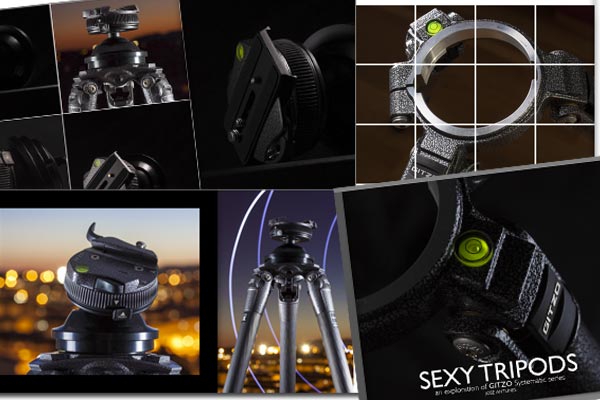 In the end, I had enough images to create an eBook using the Adobe Lightroom 4 module.

So, happy with the "touch and try" of the new series, I decided to photograph the tripods and I envisioned an ideal setting for them. I dreamed about a green field with red poppies. I had seen some solitary poppies in a field recently, and expected to find more, but the weather has not been helpful as we had a winter without rain and nothing seems to be right.

Without a red and green background to use I had to rethink my photo session. Then I got the flu (or it got me!) and had to stay home for some days. I then decided that I was going to play with the tripods and photograph them in a kind of studio session working from high-key images to some low-key experiences.

I worked this project as if I was photographing a model, trying to show her sexy curves. I know tripods are not curvy objects, but I thought the challenge was interesting and wanted to see if I could play with light to get something nice done. That's what I did, in a session that took two days of work and fun and ended being, for me, a Sexy Tripods project.

It was a challenge to do and I've learned a few things along the way. Not just about the new Gitzo Systematic tripods but also about what one can do with time to spare and a willingness to try something different. The result is a collection that can be a starting point for you to look differently at your own tripod. I know I will, from now on.

I must admit it was not easy to start. I did quite a lot of frames that were not interesting and I could not get the feeling right. Along the way I felt that maybe it was not a good idea. But suddenly I got one shot, then a new one, and a collection began to take shape. And from white backgrounds to dark backgrounds and some long exposures I created a body of work that does show what the Gitzo Systematic tripods are all about.

My little studio where all the pictures shown here - and much more - were done. Amazed? Try it at home with your own tripod. Light is magic.

How it was done

I ended up with so many images that I made a whole eBook to have fun and also as an excuse to keep on trying the new module to create Books in Adobe Lightroom 4. I am showing you here, along with some pictures, examples of the final pages I created. And I also decided to publish one image that shows the conditions under which most of the images were created.

The initial shot of my younger son with the tripods was shot against a white wall. Light is magic and controlling it lets you do what your imagination asks you for. So this was my studio: Lastolite softboxes and diffusers, black backgrounds, gobos, cloth pegs, Phottix Odin radio trigger, Canon EOS camera and various lenses all contributed to the magic. The main stage is my dinner table placed closed to a window facing east.