We've all seen those wonderful long exposures of soft, serene water and dynamic skies. Most probably know that one generally needs an eight to ten stop neutral density filter to achieve this effect. If you've looked up these high-power ND filters, you may also have noticed that they're very expensive, particularly if you're just looking to try out long-exposure photography.

If you're like me and don't currently have $100-200 to spend on a filter, you might be looking at some less expensive methods to try your hand at the effect. I've tried a few cheaper methods of achieving similar results with mixed success, so I'm going to recount those experiments here and hopefully impart some useful information to those looking into this area of photography.

I already had a cheap $4 three-stop ND filter which provides reasonably performance and can do the job in certain situations, but if it's a bright day or I need exposure times in the minutes, it's less than perfect.

The first option I looked into was welding glass. It has its pros and cons, but is such a cheap option I thought it was worth a go. Basically, it's just a rectangle of darkly tinted glass, about 4x5", that goes into welding masks and protects the eyes from the brightness of the weld.

It can be picked up for around $3 apiece and, when fastened to the front of the lens, forms a sort of ND filter. Unfortunately, it has several downsides. One is that it's not neutral at all, and the images come out with a strong green tint.

It's possible to mitigate this effect reasonably well in-camera or in Lightroom/Camera Raw, but it's best to either shoot intentionally for black and white, or to take a separate shot without the filter on at f/22 to use for the color information. 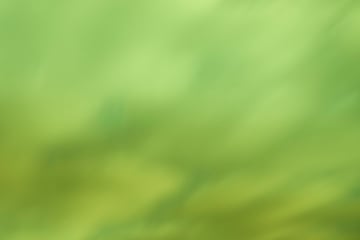 The heavy green tinting straight out of camera.

When I did this, I got a piece of shade 13 glass and a cheap Chinese UV filter on eBay. I took the UV filter out of its screw ring and UHU-glued the welding glass and the metal ring together. I worked out the exposure compensation through trial and error and it came out to about 18 stops. A shade 10 filter is around 13 stops. Very impressive for so little money, right?

Unfortunately, not so much. The manufacturing tolerances are pretty loose since they're just for looking through, so optical quality isn't high on the list of priorities.

It became apparent on the first test that my piece of glass had a change in thickness halfway up in it that was quite difficult to detect simply by looking at it, and so my test shot (color-corrected both in-camera and in ACR) had a very strange concept of what a straight line is:

Colour corrected in Camera Raw with 4200K colour temperature and +150 magenta. Composited with no filter on the left, and the warped pole from the filter on the right.

This warping might not be so critical for natural objects, but for things like buildings, bridges or piers it would require some serious warp correction in post. It may even be impossible without some multiple-shot compositing due to the diffraction blurring evident from the lensing effect created by the bulge in the glass. By removing the dark line visible across the above image, however, it would certainly be useable as a simple sky replacement tool.

However, it's not all doom and gloom. Most people seem to buy shade 10s from my research, and it's possible that the darker glass is more prone to the bulging issue.

It's also possible to buy sizes that fit in Cokin P filter holders, so you could test and use your filter without permanently gluing anything together. Also, it could be altogether possible that by going to a metalworking or welding store in person and looking at the pieces of glass individually, perhaps with the aid of a flashlight and/or graph paper, you could pick out a filter which has no problems without wasting any money.

If you have very little money to spare and are willing to put some time into buying or post-processing, this could be a worthwhile option for you.

The next idea I tested after the less-than-successful attempt with welding glass was to buy a cheap circular polarizer from eBay to use against my pre-existing CPL which would result in a variable-ND effect.

It's possible, and might even be preferable, to use a linear polarizer with your CPL, which achieves the same effect, but I didn't go that route. Because manual-focus cameras are less prevalent now, the linear polarizers I looked at were significantly more expensive.

So, once again I bought a cheap Chinese filter from eBay for about $4, and took out the glass. This time, however, I flipped it around and reinserted it into the metal ring. This would make for two oppositely-oriented polarizers, and if you've ever played with two pairs of passive 3D glasses you'll know that this causes them to darken and lighten against each other as you rotate one.

So, I screwed them together onto the lens and tried it out. Initial results were promising. With dim but direct light (equivalent to specular highlights on wet rocks, was my thinking), I could squeeze ten stops out of it before it started severely cross-patterning and colour-shifting. Excited, I took it out and happily shot a small nearby waterfall. Results continued to look promising: 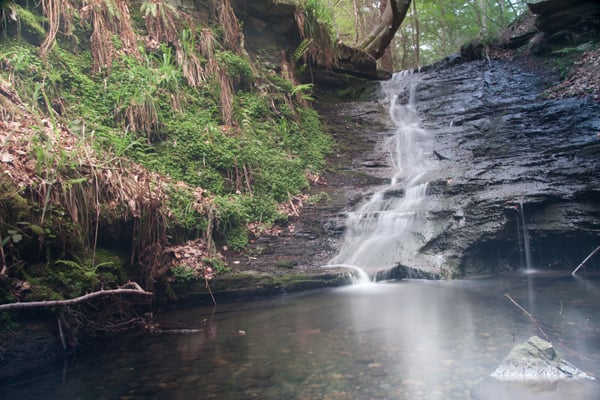 Until I got the images back on the computer, that is. The images looked ok at 33%, but at 100%, I discovered they were unusably soft from the doubling up of cheap glass. I attempted to rescue the best one, but it was having none of it:

Tidied up and graded, it's clearly started to fall apart. There's something unnatural about the colours. 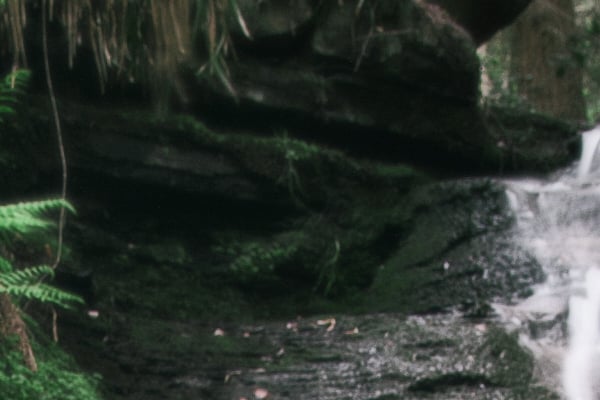 This is soft to the point of complete unusability.

There was some odd colour-shifting that was hard to shake, too. Even though it looked about right, there was something unnatural-feeling about it.

Would it be possible to use this technique with high-quality polarisers? Altogether possible, but by the time you've bought a pair of $100 CPLs, you may as well have bought one of the the ten-stop ND filters and had change left over.

Now that I'd exhausted the known super-cheap options, it was time to bite the bullet and go for the reasonably priced option.

After the dubious outcome of the previous two experiments, I considered buying one of those $20 variable ND filters on eBay, but held off because none of them made any reliable comments about their quality, and it seemed like a lot of money if I was going to have to ship it back to Hong Kong.

However, I was browsing my favourite site for cheap photographic accessories in the UK, 7 Day Shop (no affiliation, etc), when I discovered that they sell two to eight stop variable ND filters. Not only that, but make definitively positive statements about their quality and performance.

Since it's selling in the UK, it's bound by distance-selling and advertising laws which made me feel much more comfortable in spending the $50 that the 72mm filter cost. It was a big jump from the previous experiments, but I was confident. Even if it wasn't ideal for photography, I could use it for future endeavours in filmmaking as long as it was of a reasonable standard.

It arrived, and seemed to be of a good quality. It was heavy and bulky, not like the typical standard of Far-Eastern fare, and initial testing showed good performance until cross-patterning up around seven to eight stops. I looked at the sharpness before taking it out this time, and it looked very impressive. Finally, I was onto a winner. 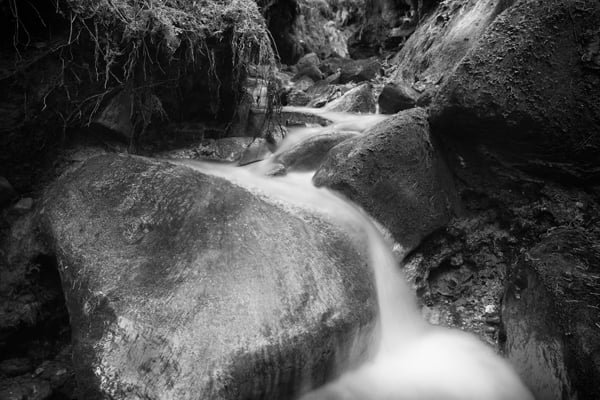 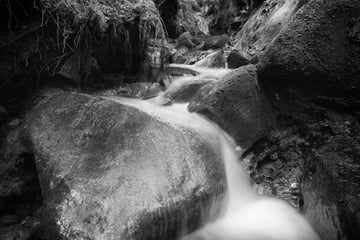 'Cascade', the first uploaded shot from this new filter.

And even after heavy processing, the sharpness is still there at 100%: 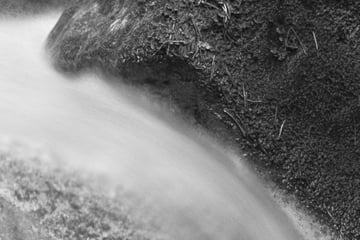 I've used it a few times since and it's working like a dream. I can even get 20-second exposures at f/2.8 during the day. This is straight out of camera: 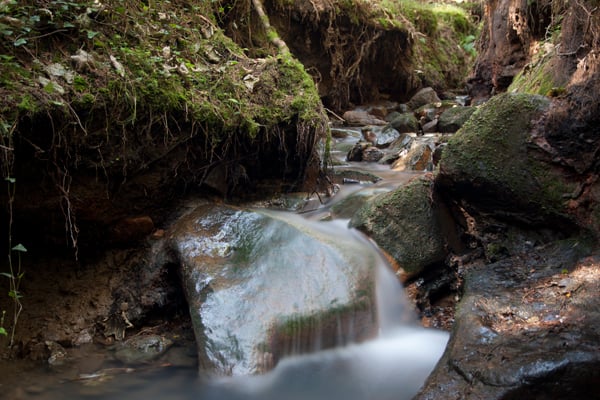 So, what to take away from these experiences? Unfortunately, it seems to be very much that you get what you pay for. Don't expect ideal results in long-exposure for anything less than around $50.

However, the welding glass seemed like the most workable idea, if you put some effort into it. That route would be my advice if you're looking at the sub-$10 game. Be careful, though, you could end up (like me) spending more than you bargained for in the quest to keep costs down.