How to Choose the Right Photographic Film

Like everything else, every film type has its own upsides and downsides and which one you end up choosing depends on the assignment you are shooting, the end result you have in mind, as well as your own individual taste.

Panchromatic black and white film, also known as pan film, is sensitized to all colors of the visible spectrum as well as the shorter ultra-violet (UV) wavelengths during the manufacturing process. Pan film does produce photos with more grey tones and a truer feel of the original colors.

400 ASA films offer a good compromise between speed, grain, and resolution, and might be best-suited for general purpose shooting in a variety of lighting conditions. 400 does show some grain when photos are enlarged beyond a certain size especially in even tone areas such as clear skies or calm seas, though the degree of grain visible depends also on the development process.

For the best results in terms of image quality and resolution, it is best to shoot with slower film if the average lighting conditions allow. If you typically shoot in poor lighting conditions, fast moving subjects, or with long telephoto lenses it is better to use fast films as they will give you the chance to use faster shutter speeds.

A panchromatic black and white film image by aj victorio

This was troublesome in many situations as any green color in a scene would look pale, blue would look white, and red would appear really black in the final image. This type of film is mostly available as sheet film and is useful when copying black and white prints or monochrome drawings. It can also be handled in the darkroom safely under a red safelight.

Ortho films that were equally sensitive to the green and yellow wavelengths of the spectrum were known as Isoorthochromatic films.

A orthochromatic black and white film image by Georg Sedlmeir

Isochromatic black and white film falls somewhere in between Ortho films and Pan films. It is highly sensitive to violet and blue, has average sensitivity to yellow, slightly lower sensitivity to green, and even less sensitivity to deep red colors.

An orange (or yellow) filter might be needed to correct the film's response to the orange / red end of the spectrum. Isochromatic black and white film can be handled in the darkroom safely under a red safelight.

Chromogenic black and white film is a type of negative film that contains dyes along with the emulsion which allow it to form purple or brown color casts in the final image once developed.

The processing of such films is called "chromogenic," during which all silver molecules are bleached and the dye is formed in those corresponding areas instead.

Chromogenic black and white film is more tolerant of exposure inaccuracies, especially over-exposure. A disadvantage associated with this type of film though is the softer grain and the slightly poorer image sharpness and contrast than is otherwise possible. 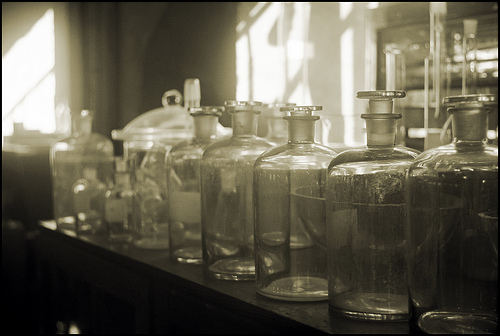 A chromogenic black and white film image by Werner Wittersheim

Line film is a high contrast film that gives a black and white image with very few, or no greys in between pure white and pure black. Lith film is an extreme form of line film, meaning it is even higher in contrast.

Because of the very high contrast material used in line and lith films, exposure accuracy is of great concern which is why it is often a good idea to take important shots on regular film first and then apply the desired settings on line or lith film later. These types of films are also a great way for copying prints and monochrome drawings. 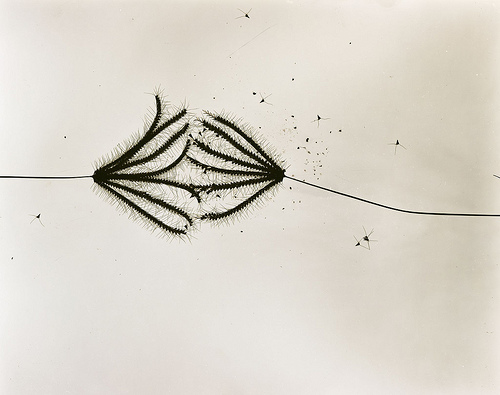 A black and white slide film image by sludgegulper

Due to the lack of availability of these films, workarounds have been developed using special chemistry kits sold by some manufacturers on the market for reversing regular negative film or de-saturating color slide film.

All in all, an important thing to keep in mind when using any kind of slide film is getting your exposure right, as there is little room for manipulation and adjustment in development.

There is a limited range of available instant black and white film both in terms of brands and speeds that can be found. It is usually used as a way to preview lighting and composition decisions to be made later on regular black and white film for the final exposure. Instant film is usually higher in cost than regular film, and the life expectancy of the prints isn't as long.

Color negative film, particularly the 35mm format, is widely manufactured in all types and speeds. It has great exposure latitude, meaning it is more forgiving of exposure mistakes and can handle high contrast scenes pretty well.

Color negative film is usually balanced by manufacturers for daylight and flash light (5500k - 5600K). When shooting indoors under tungsten light (which is around 3400K) you need to use a blue conversion filter over the lens to avoid prints with yellow / orange color casts. It is also possible to correct color tints during development, but using a filter is simpler and more efficient. 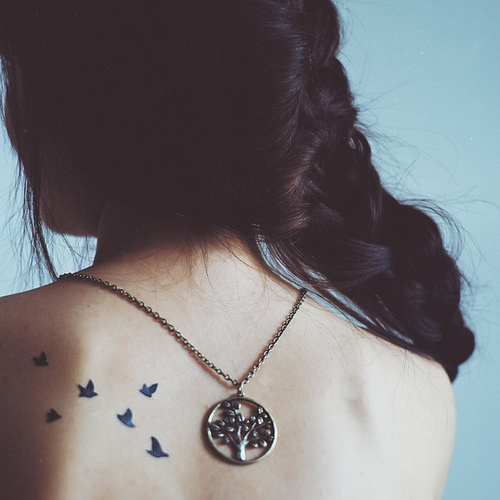 A color negative film image made by Yang Du

Some color negative films are balanced for tungsten lighting though those are not as widely available. If you shoot with one of those in daylight or with a flash, however, be sure to use an orange filter to correct any blue tinting or color casts in the final image. All in all, color negative film is generally considered one of the most forgiving film types in terms of incorrect or mixed color temperatures (up to a certain extent of course).

As with black and white negative film, 400 ASA color negative films offer a good compromise between speed, grain, and resolution, and might be best-suited for general purpose shooting in a variety of lighting conditions. 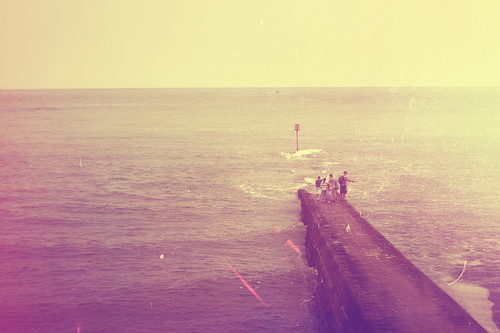 A color negative film image made by Bethan Phillips

Color negative film is manufactured in a variety of characteristics for different results to suit all tastes and moods from vivid colors, to subtle, to bold or natural colors. Slow films tend to be more vivid, whereas faster films usually give softer colors.

From color negative film, you can easily and cheaply get enlarged colored prints for hanging on your walls. Most labs can also give you black and white image prints from your color negatives, so you get the best of both worlds. 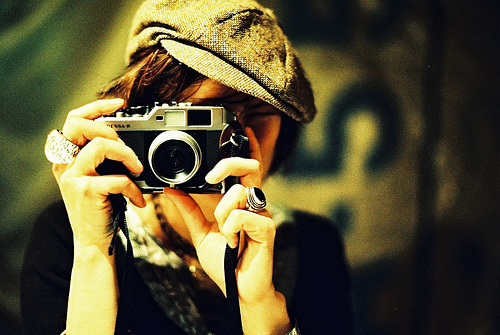 A color negative film image made by kris krÃ¼g (kk+)

Color negative film is also forgiving in terms of exposure mistakes and gives you some latitude for correction during development (generally up to one stop for under-exposure and two stops for over-exposure). 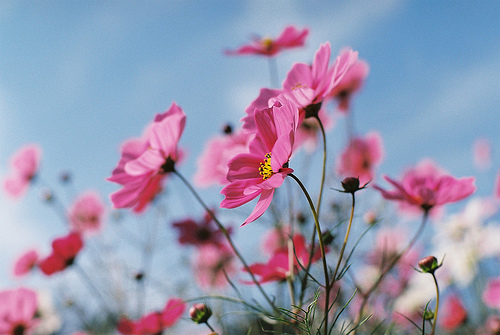 A color negative film image made by Anton Novoselov 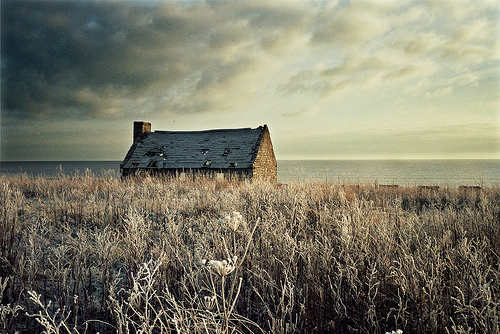 A color negative film image made by HermÃ©s

Color slide film or transparency film (color positive film) is reversal in that the positive image (as opposed to the negative) is formed on the film itself. The end result of shooting slide film is actually the same thing you load in your camera, just cut into squares and mounted, unlike the prints made from other films.

You can get prints from your slides or transparencies but the cost is higher than printing your color negative films. The term "slide" is usually used for 35mm format reversal film, while "transparency" is often used with larger reversal film formats such as sheet film.

Slides and transparencies yield exceptional image quality in terms of resolution, color saturation and image details, especially with slower films. They also show greater dynamic range than that possible with any paper print.

A color slide image made by Mel Stoutsenberger

With higher film speeds, image grain and loss of color saturation is more evident with slide film than that of color negative film of the same speed. Slides and transparencies are also less forgiving of incorrect exposure for they have less exposure latitude (generally up to one stop for under-exposure or half a stop for over-exposure).

They are less forgiving of incorrect color balance as well, so you need to pay more attention to matching your film type to the lighting conditions available. Just as with color negative film, reversal film is mostly balanced for daylight and flash light, with some out there balanced for tungsten light. Be sure to use a blue filter if shooting a daylight balanced film under tungsten light, and an orange filter if shooting a tungsten balanced film under daylight.

A color slide image made by nat urazmetova

As you can see, each film type has its own characteristics. It is a good idea to experiment with each kind and see what fits your needs best. It might also be beneficial to stick with each type you try for a while until you get the ropes and know how to best "work" it to your advantage.

Generally, if you are working on assignments or projects where consistency is of great importance, it is advisable that you only use one film type for all photos of that project, for as you saw from the images above, different film types can and often will yield dramatically different results.