How to Engage Your Viewers by Creating a Moment of Discovery

Photography is a quick medium. When we begin to study it, we learn composition techniques that make our images easier to view and more quickly understood. While all of these techniques are valuable, they tend to work against an equally valuable technique: making your viewers look deeply into your images, delaying their response to engage them, and creating a moment of discovery.

Imagine hiding a message beyond all that which is recognized at first glance, and having the viewer peel away a layer or two before revealing the essence of the photograph. We've all seen it in movies, where the camera slowly approaches an open door or walks us through a dim hallway and then lets us in on what might be going on in the next room or across the hall. But how can we apply such a technique in a single, still frame?

Truth is, the less work your viewer has to do to get the idea behind a photograph, the faster they move on and onto the next. To keep your viewer engaged with your work and urge them to stay involved, it sometimes helps to give them the chance to further investigate and try and decode the hidden message underneath it all. To give them the feeling that there's more to this piece of work than meets the eye (at least at first glance).

In order for this technique to be successful, you need to delay your viewer's complete response to the image while not losing them entirely, and to succeed in correctly directing your viewer's attention to your goal.

To achieve this you can incorporate any of the known eye-leading exposure or compositional photography techniques such as lines (converging lines, diagonal lines...), scale, frame within frame, and tonal gradation. 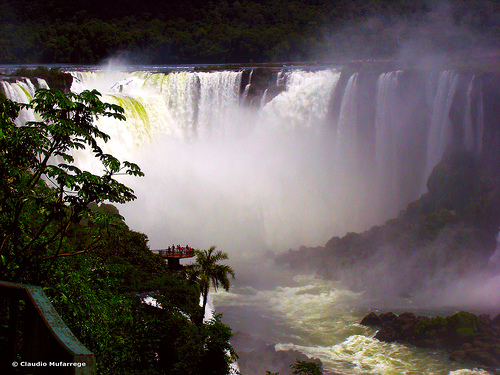 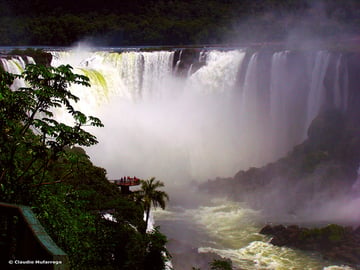 The above image is a good example of using scale. The viewer's attention would probably be attracted to the bright waterfalls in the back towards the top of the frame at first. The eye might then follow the water all the way down to the little lake, up to the trees in the foreground, followed by that little terrace or porch to finally rest upon the crowd who are standing there enjoying the whole scene all the while. Note how the successful use of scale in portraying the crowd as tiny objects with relevance to the immensity surrounding them delayed our attention from finding out about them till later on. 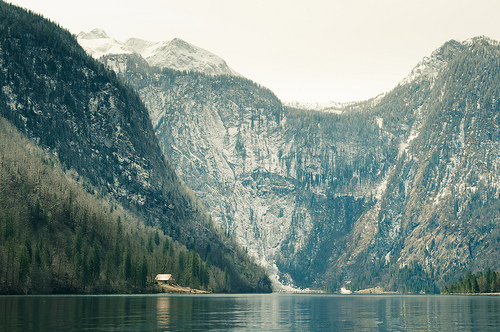 Another cool scaling example. The vast mountains are there to draw the attention first, down to the lake and then to the sides towards the trees to find out there's actually a tiny little hut just lying there in the midst of it all. What helps this hut actually being recognized is the white that is contrasting with the green background formed by the bushes on the bottom left hand side of the frame. If it was placed towards the center of the picture against the mountains, I don't think it would have made it and that message probably wouldn't have been delivered to most viewers. 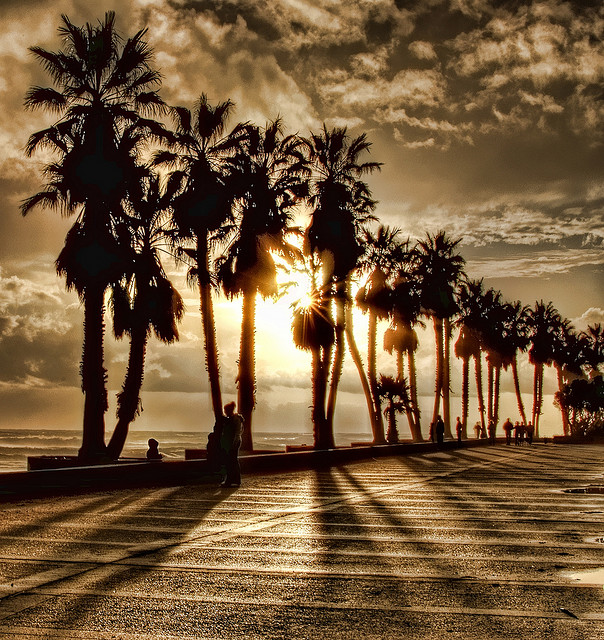 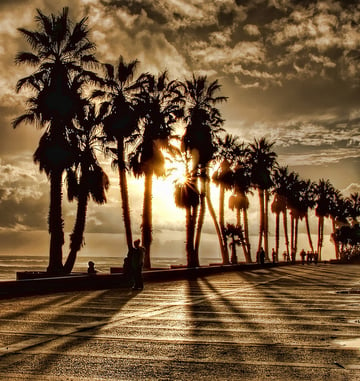 Here's another great example illustrating the use of light and shadows to delay the viewer's complete response to the overall contents of the image. Upon observing this photograph, the eye is attracted to the stark dark tall trees across the image first and the soft shadows they are casting on the ground in the foreground of the picture.

Then comes the bright sun with that lovely warm flare hitting the trees, and the glow moving backwards along the line till the end. The eye then comes back to the front along the line of trees to finally recognize the silhouetted tiny human figures along the way. With this photo, the viewer's response to the people hanging around by the trees watching the sun setting on the beach was greatly delayed both by this soft dance of light and shadows, as well as the implied scaling between the immense tall trees and the relatively not so tall human figures. 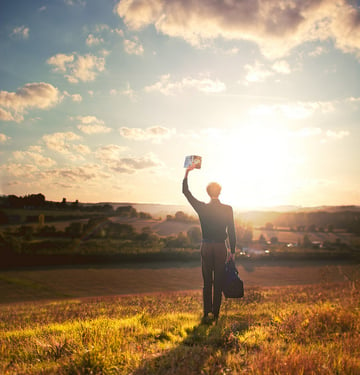 That's another lovely example that hides a couple more interesting ingredients. First we see the guy with a book in one hand and a suitcase in the other. Next the eye is drawn to the bright sun flare and the glow it casts across the image moving beneath the foreground towards the back and to the golden meadows, and finally we realize that faded, pastel colored little rainbow-like element towards the bottom-left of the picture. 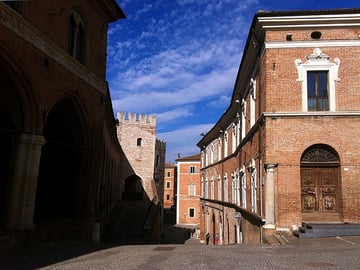 In the above image, the photographer has incorporated the buildings (especially the ones in the front) as a way to encapsulate the path that is leading all the way to the back of the frame, and this is what meets the eye at first glance.

Then we start to wander along the line in between to finally take notice of the couple standing there between the huge majestic buildings chatting (one dressed in black and the other in red pants). This surprise creates an element of added interest and makes us linger a little longer, pondering on what these two might be doing, which in the end engages us further and gives us something to work out while looking at such an image. 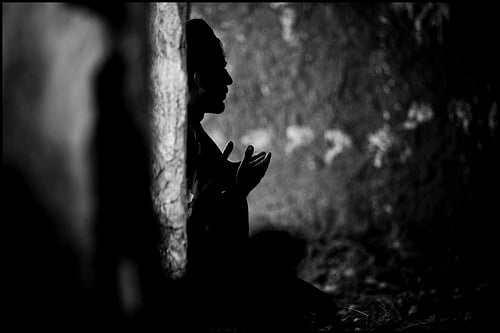 Here we have a view of a praying man partially obscured by what looks like a wall or perhaps an open door. Such an approach to composing the scene heightens our interest and increases our involvement in the picture. This way we are actually wondering who's behind that door, what are they doing, what's their relationship to this place, what else could there be that is not obvious as well, and on and on. The perfect use of light and shadows as well as the beautiful incorporation of the tonal range also helps make this approach very successful. 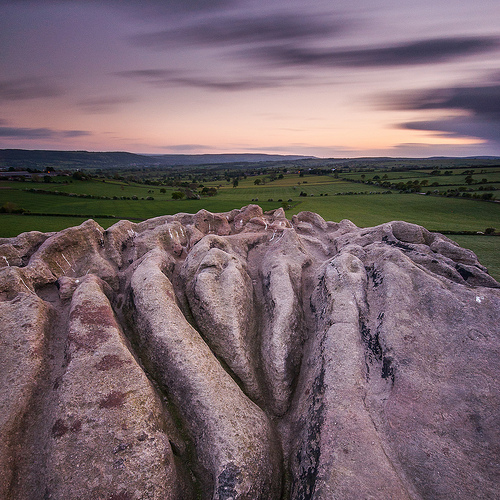 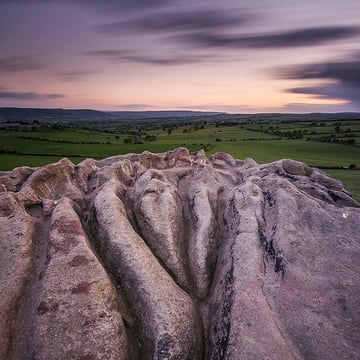 The image above is also a perfect example of delaying the viewer's response to the whole scene thus engaging them more in this piece of work. Here the photographer made use of the lines eroded by water and wind on the rocks at Almscliffe Crag in North Yorkshire as a framing foreground to the lush meadows and beautiful silky purple skies lying ahead, which our attention is eventually drawn to while our eyes wander about the frame.

The use of these techniques (among others) for delaying the viewers' response and engaging them further in a picture is a great way to go to spice up your body of work. Not all situations require (or even allow) for such an approach, but when the opportunity arises you can experiment a little with these framing styles to see if they can add value to the particular circumstance of a given shot.

Of course, you need to be careful of not losing your audience's interest completely or failing to get the message across. Like if you are going the "scaling" way, you need to make sure your object is not very tiny with relation to the other elements and thus being entirely lost in the immensity of its surroundings, but that the sizes and figures within the frame are appropriately scaled with relation to each other otherwise you might run the risk of your audience not getting the message and moving on.

There are ways of revealing your message in a photograph bit by bit other than these discussed here. For example you can try placing your main subject off center, or you can try only showing part of the subject and letting the viewer work out what the rest might be, or you can try shooting off target and playing with leading lines or focus to get the message across.

Generally speaking, upon looking at a photograph the eye is usually drawn to larger shapes and forms and contrasting areas and later tries to work out the smaller details, so this should be kept in mind in order to help you compose your image correctly in such a way that your message gets delivered eventually instead of being lost.

Diana Eftaiha
Diana Eftaiha is a software engineer. You can visit her website at www.dianaeftaiha.com