How to Perfectly Capture the Rise of a Full Moon

by Peter West CareyJan 19, 2010
Read Time:8 minsLanguages:
ShootingTripodTelephoto Lens
This post is part of a series called Night Photography.
How to Photograph an Eclipse
How to Set and Control Your Camera Manually for Night Photography

The full moon. Steeped in legend and myth, a full, orange moon rising from the horizon has sparked the imagination of humans for millennia. For photographers, capturing a full moon rise can present some challenges and opportunities. Specifically, the moon is relatively bright compared to the darkening scene through which it is rising. In this article I'll show you, step by step, how I went about capturing a wonderful moon rise on a chilly December evening.

As the full moon rises approximately at the same time the sun sets, a tripod is imperative to a proper capture. While I used a relatively fast shutter speed for the situation (half of a second), hand holding would result in much blur. For this shot I used a Canon EOS 5D and a Canon 28-300mm L lens. A lens with a magnification from 200mm and longer is advised so the moon will fill more of the sensor. If the lens is too short, detail of the moon is lost as it becomes a speck on the horizon. It's important to find a sturdy surface that is also safe. In my situation I was forced to stand the tripod (and myself) on the roof of my truck to gain a good vantage point. 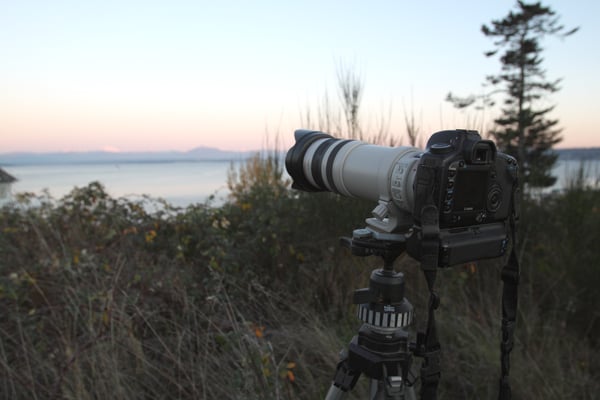 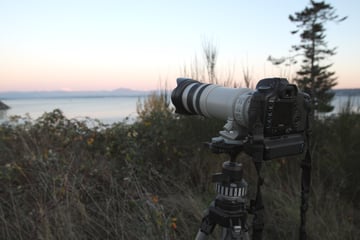 The first task in capturing a full moon rise begins a day or two before. You will need to check your local newspaper or the US Navy's fine site which helps calculate moon rise times all over the planet. Armed with the moonrise time (hint: the full moon rises within 30 minutes of the sun setting) head to a location with a clear view of the Eastern sky. As it is the day before the full moon, the moon will be up about 30-60 minutes before the sun sets, so try to get out at least an hour before sunset. This way you will be able to note the location on the horizon where the moon rises. The moon will rise in different locations, North to South, all through the year, so don't expect it to come up where it did two months ago. Set your camera to about 200mm to check for foreground objects and to the sides of where the moon will show itself. It's often handy to include human and non-human elements within the picture.

Step 3: Setting Up For The Shot

On the night of the full moon, arrive at your location approximately 30 minutes before the moon's scheduled appearance. Make sure you pack a fair amount of patience as you may be sitting around for a bit. While the calculated rise time is accurate, hills, mountains or buildings may make the rise a bit later than anticipated. In this example, I had to wait 20 minutes past the calculated time before the moon inched above the Cascade Mountains.

As you had scouted the location the night before, compose your shot on the most likely location of the moon rise. Remembering that you will have to adapt to whatever Mother Nature throws at you and adjust things if your guess isn't totally accurate. Consider both horizontal and vertical orientations for the shot. If there are a lot of higher clouds in your area, you may want to consider including them and centering the moon and horizon on the lower section of the frame. Otherwise, include some foreground features if you are not blessed with a 600mm lens which will isolate the moon within the frame. Using the rule of thirds is a good start to framing the moon shot. Try to avoid placing the moon in the center of the frame.

Metering before the moon comes up can be tricky. As the sun fades behind you, the scene will get darker and darker in front of you. Your meter will tell you it wants longer and longer shutter times and chances are the f-stop will hit the full open setting on your lens. While this will result in a pleasant lighting situation for the scene in front of you, it will blow out any detail in the moon. Take for instance this 'correct' exposure below. This image was exposed at 300mm, f/5.6 and 4 seconds as the camera suggested. While the foreground is visible, the detail on the moon is gone. Remember, the moon is a mighty reflector and will be brighter than the scene in which it arises when full. To combat this challenge, there are two things you can do. 1) Wait until the moon is partially up and spot meter directly off of it or 2) Underexpose by two stops as a starting point. I chose to spot meter when the moon appeared. 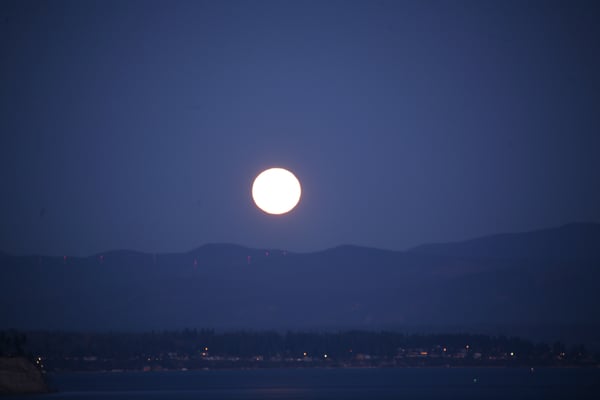 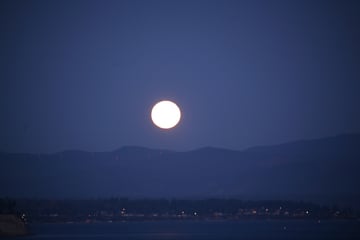 I prefer to use a low ISO to avoid too much noise. Noise can be a problem though with longer shutter speeds created by the lower ISO. It's some thing of a catch 22 but as digital cameras improve, higher ISOs are possible with less and less noise. In this case, I went with ISO 50 but it's likely your camera will only go down to 100. When the moon came up I spot metered off of it and got the resulting shutter speed of .5 seconds and f/5.6. I had switched to manual focus as the scene was getting rather dark and I wanted to make sure the moon itself was in tight focus. I wasn't concerned about the foreground objects as much.

Bringing the photo into Photoshop Lightroom, my editor of choice, the image is fairly dark as you can see below. This is what we'll work with on our way through to the final image. 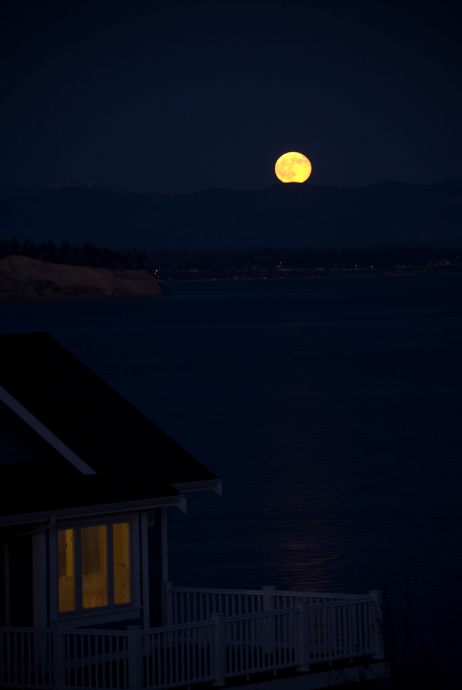 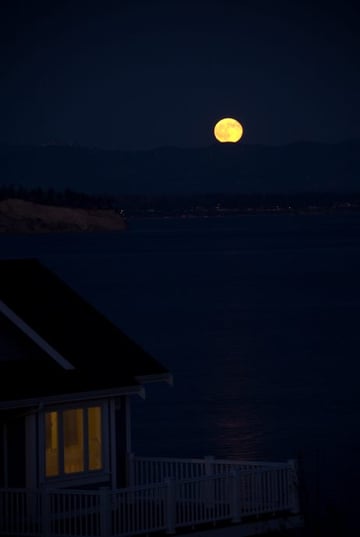 First, I upped the exposure by two stops and then Adjusted the Vignette setting to +83 to remove the dark corners. 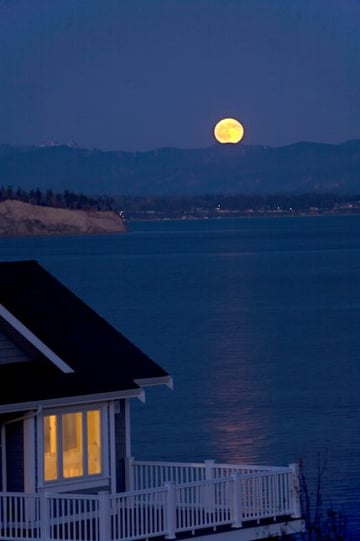 It's hard to see in this smaller image, but there is a lot of dust from my sensor (which has since been cleaned!). Almost always there is a little something on the sensor and I prefer to remove it as soon in the process as feasible. After adjusting the exposure, it's plain to see this image needed cleaning.

Next I ran the Highlight Recovery slider up to +57 in hopes of toning down the moon a bit. This didn't quite do the trick for me with the moon itself but it did get the image closer to my ideal. I then increased the Black Clipping to +8 to further bring back a darker mood to the scene. 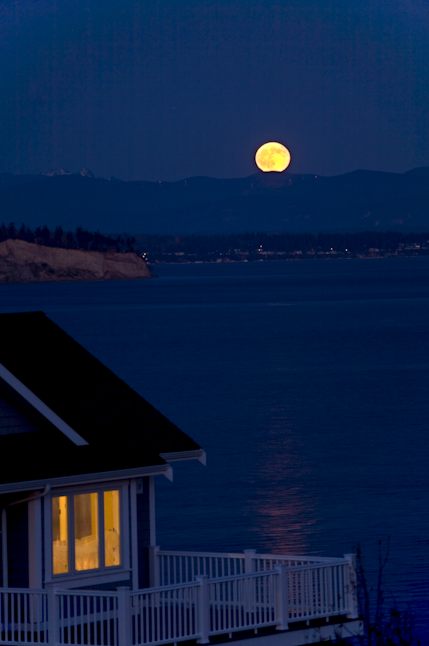 At this point the moon is still too bright for my liking. When I zoom in I can see more detail but it's not coming through the overall brightness of the moon. I click on the Adjustment Brush and draw a circle over the moon. Then I fiddled with the exposure, contrast and saturation to bring out the golden color I saw that night. I'm not one for making things artificially bold, I prefer to make them close to what reality I saw through the viewfinder. In the end I chose to drop the Exposure by -1.00, leave the contrast unchanged and increase the Saturation to +28. Again, this is just for the mask of the Adjustment Brush on the moon itself. 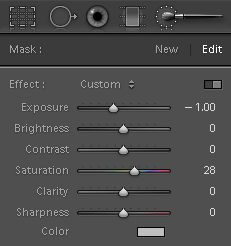 There's a bit too much sky in this image for my liking. If the moon was a bit higher it'd be ok, but I don't like that much open sky above. After the Adjustment Brush changes in Step 11 and cropping, this is the image. 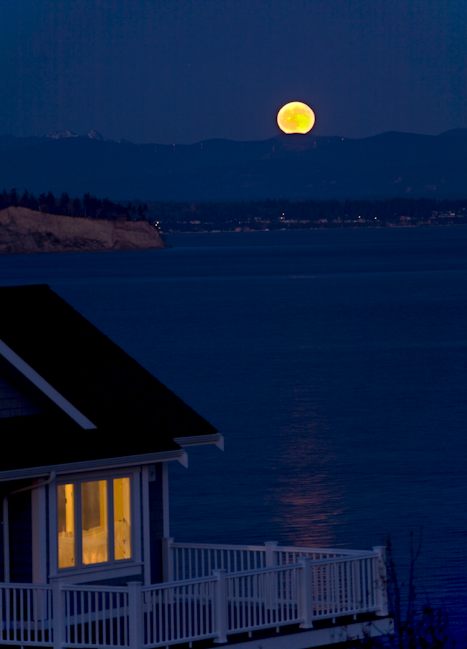 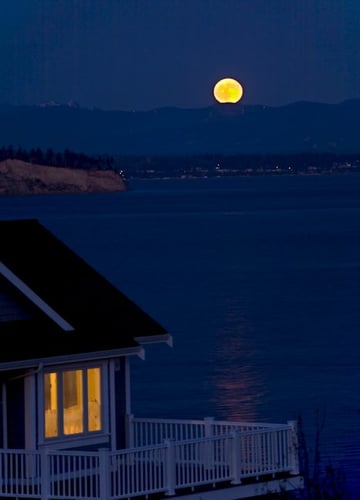 After staring at this same image for a while I realize something is just a little off and it's the horizon. I take a moment to click on the Crop tool and then adjust the image angle by 1.33 clockwise. I love the angle tool in Lightroom because it's so simple to use. Find a line that you want level in your picture (in this case, it's easy) and then click-drag a line across it. Lightroom will then tilt the image and make a crop to maximize the new image. It's pretty slick and useful.

The image is still a bit dark for me. Adjusting the Exposure to +.80 and then bringing back the highlights ever so slightly by increasing them from the previous +57 to +71 keeps things in check. 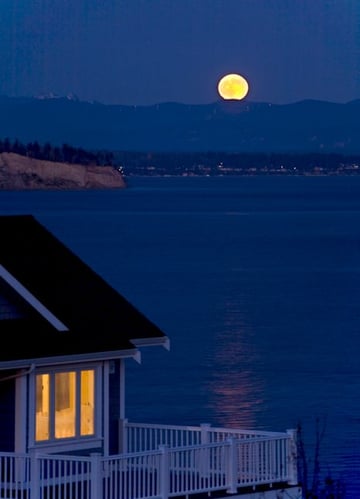 I'm just about done with the edits but the moon is still bugging me. I go back to the Adjustment Brush and click on the dot over the moon from Step 11, which allows me to continue fine tuning the mask I've painted over the moon. This is another handy feature of Lightroom, you can go back to any area you've adjusted like this and continue tweaking even after many other steps. I adjust the Brightness by -55 which takes the moon from this first image to the second. 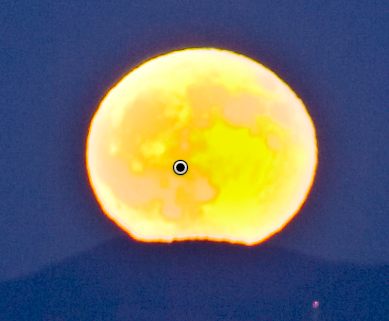 The corners are a bit too dark, still. I adjust the Vignette to +71 to even the tones out. And then I'm finished! The image is to a state I can enjoy. Endless tweaking is always a looming pitfall with post-process editing so it's always good to walk away from the screen for 15 minutes, go outside and soak up some fresh air (and possibly rain or snow) and then come back in with fresh eyes. Most of the time you'll find you are quite happy with where things stand and those tiny tweaks aren't really needed. 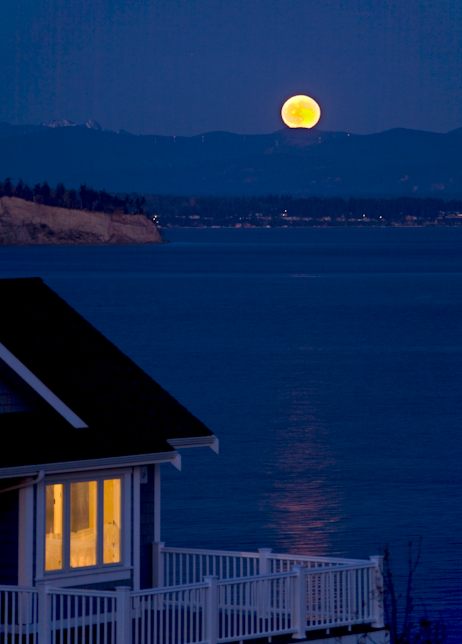