How to Photograph Birds of Prey in White

The first thing people say when they see my Birds of Prey Portrait Sessions is "nice Photoshop cutout work". In fact, it's not a cutout, the birds are photographed against a white background. Let me show you how.

First things first. Let me tell you the background for this series. The Birds of Prey Portrait Sessions started from my interest into doing some birds of prey photographs, but trying to keep away from the usual natural backgrounds. White seemed to be a good choice to get the birds as the only point of interest.

This is an ongoing collection as I want to do more portraits like these whenever I have a chance. I just feel that birds become so much more interesting this way, and are also a good exhibit subject. Beyond that, images made this way are very usable in terms of biodiversity and nature conservancy education.

The studio was set in a small room at the falconry. I used a simple two flash, diffuser and softbox solution.

Before someone tells you that this is not new, let me tell you that they are right. White backgrounds have been used for ages. And this is a derivative exploration from the photography done by MYN - Meet Your Neighbours, a worldwide initiative that tries to get people to look at nature at their doorstep.

At MYN, the idea is to photograph animals or plants in their own surroundings, taking the studio outdoors, for this collection I took the animals indoors, to an improvised studio. Despite that, the technique is the same used for MYN projects, applied to some rather big birds in this case.

This is not a Photoshop cutout

The birds in these pictures are all from the falconry at Tapada Nacional de Mafra, a nature park where I used to photograph. These birds play an important role in youth education, some of them going to schools, used in public shows and on show at the falconry. Generally, these are birds that for one or other reason had to be saved and treated and cannot be returned back to nature. 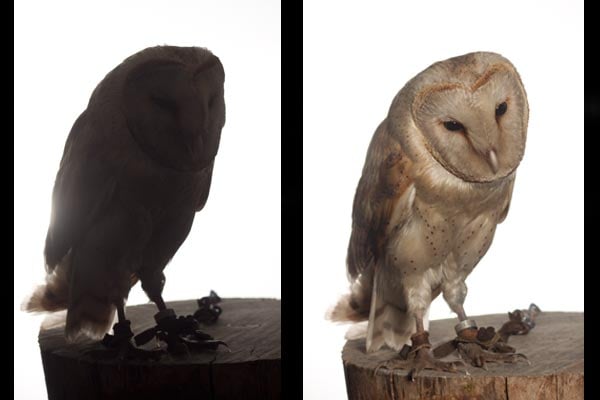 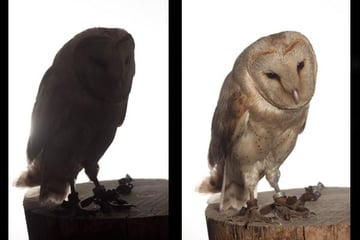 First, you have to define the exposure for the background, to get a pure white (left) and then introduce the front flash (photo on the right).

As I mentioned earlier, people always comment on the "nice cutout," meaning that for them it's Photoshop work, cleaning the area around the birds. As I've said, it's done another way, and it's a technique you can apply to other subjects. But let me show how I did it.

I set up a small studio on an empty room at the falconry, as it would make it easier to handle the birds. The falconer would move them one by one to the tree trunks we used as the standing place for the birds. I started by getting my setup in place. A large diffuser for the background, with a Canon Speedlite 580 EX II on an Phottix Atlas radio flash trigger placed on a tripod behind the diffuser, and a large EzzyBox (Joe McNally's model from Manfrotto) with an old Canon Speedlite 430 EZ and Phottix Atlas radio flash trigger inside.

With a third Phottix Atlas transceiver on top of my Canon EOS 50D, I was ready to start the tests. The idea is to overexpose the background so you get a pure white. The flashes are set to manual and you start by using just the background flash, to get the proper overexposure.

After some initial shots, just to check that everything is working, we we're ready to the real thing. To do that one of the birds, an owl that is of calm nature, was brought in, as the final setup takes a bit to get right and you need a subject in place. Once you've a perfect dark silhouette (see image above) you introduce the front flash and define what is the final exposure.

You always have to think in terms of depth of field, to get the bird in focus using their eyes as the central point, and also use a high speed in order to reduce the effect of the ambient light. Both test exposures here were made at 1/250 at f/9, the first with just the background flash, and the second with the two working.

In terms of power for each unit, usually the background flash for subjects this size goes full power (less for flowers and smaller animals) with the front flash working from 1/1 to 1/8 power depending on aperture used, distance from flash to subject and whether you use one or two diffusers on the front of the softbox. For the final images in this series, because I wanted to have more depth of field, I used apertures between f/16 and f/18, meaning I had to use more power on the flashes.

Take it as it comes 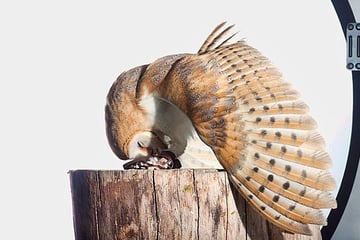 Even an owl gets tired during a photo session and then the photographer waits patiently that the bird gets back posing.

When the basic setup is done, you're ready to go. This is done rather quickly, as you don't want to stress the animals. The falconer can help you, because he knows the animals well and is aware of their reaction.

Still, you've got to be quick and not expect too much from the animals in terms of "posing" for you. I take it as it comes and try to do the best I can from it. That's one reason why I did not use a tripod: I wanted to be able to move freely very fast to get the best shots from each bird. Sometimes the rather large background diffuser felt small for the birds and I had problems to place them within the best area within the frame. And we also had to pause when one of the birds decided to do a pause to rest its forehead (see image above).

The collection of shots from a day's work already opened in Lightroom 3 ready to edit.

Still, this was a whole day work, with a pause for lunch. At the end I had a collection of images that still needed editing but that were as I wanted them: washed out backgrounds that would make it easy to get the final result without much Photoshop.

In fact, I did not even use Photoshop. I used Bridge to select the pictures I wanted to work on and exported them directly to Lightroom 3 to start editing. The work in Lightroom 3 is very straightforward once you've exposed the images properly.

You just make sure that you've a pure white background, crop the images to the final size you want, also exclude parts of the studio setup that may show on the corners of some images. Adjust each image individually - I like to work each image, even if I can synch some actions to a group. After that, you're almost done and ready to export the images to their final destination.

Using the Adjustment Brush in Lightroom 3 it's easy to "paint" the areas that are not perfectly white so you get the background as intended.

Depending on the size of your subject and the power of your background flash, sometimes you may find out that the corners of your image are not pure white and you need to adjust them. In Lightroom 3 this is easily done. For this example I choose the image of the Red-tailed Hawk. Because of the large size of the animal and the fact that it was moving from side to side, my large circular diffuser (see image above) was too small to cover the whole the bird. The flash, at the center, did not fill the whole area perfectly when I got this shot, which is the best in terms of the bird's position. 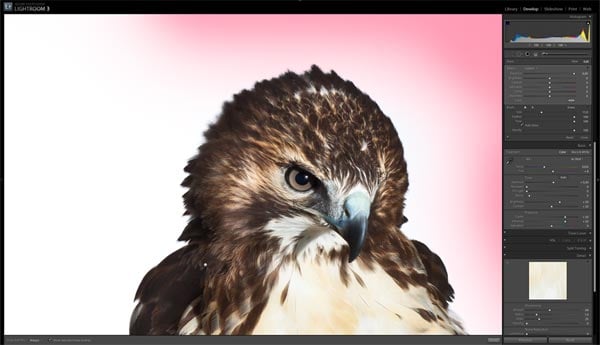 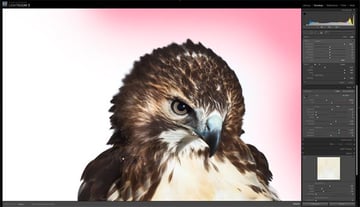 To paint closer to the subject, enlarge the image so you get a better idea of the areas covered.

Once you've defined the image needs some extra white on the corners, you just need to choose the Adjustment Brush on the top right menu (K on a PC), choose the Exposure and move the slider all the way to the right. After that you choose a Brush size (use the Auto Mask) and start to "paint" the areas you want to get white. To check the areas covered press O (on a PC).

When you need to work on areas closer to the subject it's better to enlarge the image (Space + Left Mouse Button on a PC) to see with more detail what you're doing. Keep the "painted" area visible for an immediate inspection of the work being done. 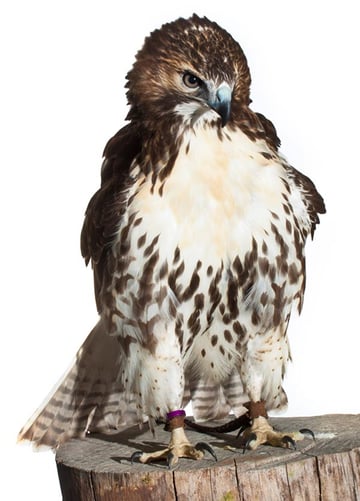 The final image exported from Lightroom looks like this. A Red-tailed Hawk doing an impressive pose.

Be careful not to touch other areas once you're done exported. If you've done your studio work properly there will not be much Lightroom 3 work besides the normal adjusting of each image.

To see some more images please visit the two websites I've set up to show the collection: 500px.com/JoseAntunes and joseantunes.artistswanted.org.

This technique, which is simple to implement, can be used on many subjects beyond birds of prey. I use it a lot for my flower photography and also for other subjects, like butterflies. But for some exceptional imagery in this area, take time to visit the website for the MYN project I mentioned before. There you'll find inspiration for your own projects in photography.