How to Use White Balance Creatively

People are told to get their white balance correct in their photos, but rarely told to use the White Balance to get the wrong color... and the correct feeling.

Photographers using film know this with their eyes closed: to get the best ambiance for a graveyard collection of pictures you just had to pick a film balanced for tungsten and use it in daylight. A nice blue cast would give the images the right feeling.

This is a shot of a sunset, but the use of a tungsten white balance setting changed the mood completely.

Tungsten balanced film is/was also used in the motion picture industry to produce "day for night" or, as it is also called, "American night," those bluish ambiances lit by the moon.

Today this effect is much easier to achieve: just turn your camera's white balance to tungsten and go shoot outside. Now, you've been told that you should use tungsten balance to reduce the orange cast you usually get in pictures taken indoors, under common house lighting. But why should you not use it other ways and explore the box of filters you have hidden in your white balance settings? That is the purpose of this article.

Cameras these days have a whole set of predefined white balance settings that take care of the hard work.

The chart shows some of the effects you get with the same exposure, but different white balance settings. The changes are subtle in some of them.

Typical presets are: Tungsten, Fluorescent, Daylight, Flash, Cloudy and Shade. Their is Auto, when the camera decides what is best (and works fine most times). The Kelvin or K setting lets you define with precision the Kelvin value to use (Kelvin is the name of the unit to measure the temperature or color of light). Each preset is to be used under the conditions mentioned, to get the right balance. That's what we all learn and everybody tries to get done correctly.

AWB works with values between 3000K and 7000K (tungsten to daylight with slight overcast sky), Custom let's you take a picture of a reference object - grey card or similar - under the same lighting as the subject to use as reference.

Kelvin lets you play with the color temperature as much as you like, from, in some camera models, 1000K (candlelight) to 10000K (shade or overcast sky). That's all there's to it. Now that we know the rules and numbers, we can do something else: break them. And have fun.

Guides and Not Rules

The presets you camera offers you are to be taken with a pinch of salt. In fact, the cloudy setting does not necessarily mean you can only use it when clouds show up in the sky. If your pictures are cool (bluish) you can use Cloudy or even Shade to get a warmer tone. Or you can use the Kelvin directly and set the value that works best for you. It takes a little trying, but with digital is easy: shoot and look at the LCD! 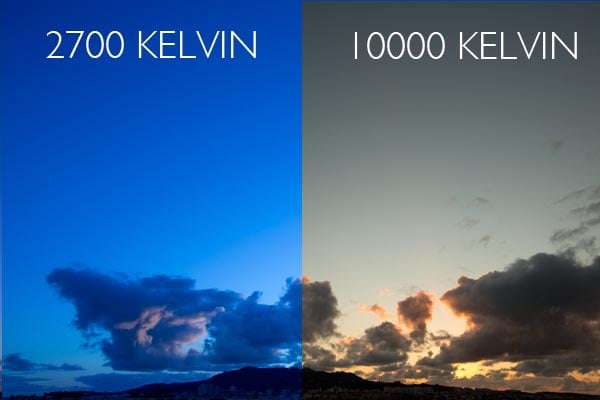 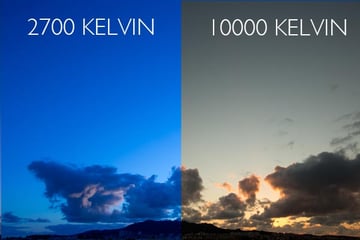 The image, made of two different pictures, shows what you get at 2700 Kelvin and at 10000 Kelvin.

To make things easy to remember repeat this until you get it in your brain: a low white balance setting makes an image cool or blue; a high white balance setting makes an image warm or orange. The image above should help you to remember it. It was made shooting the same scene at 2700 Kelvin and 10000 Kelvin in two different frames and then using half of each of them. 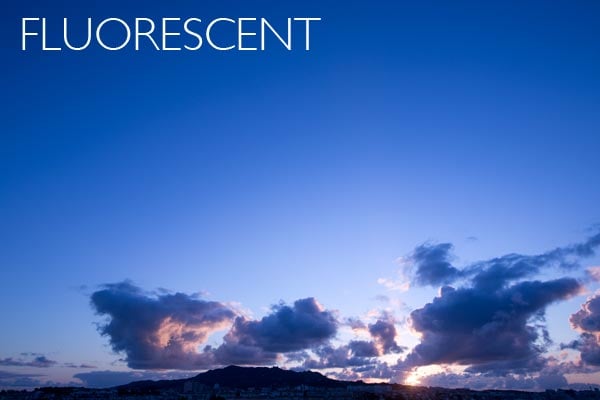 Reducing the orange tone in a sunset picture can be done selecting the fluorescent white balance in the camera.

When I am out shooting with people, let's say a sunset, they always ask me how I get my sunset sky with a color different from theirs, as they did not see me using any filter. It's easy: when I have a sky that is too warm for my taste with auto, I change it to fluorescent.

Fluorescent introduces magenta to cut the green tone usually present in many fluorescent lamps, and it works here as the image above shows. It's a way to get a different mood without having to carry more gear with you. Remember this next time you're out photographing a sunset.

A Rough Guide to Kelvin

The warm tone was introduced in post-processing selecting a different white balance. The original was grey with a bluish tone. The picture shot in RAW made the process easy, but you can also do it with JPEGs.

When RAW is Better

People point out a lot of reasons to use RAW, a lot of them not really reasonable. But if you want to play with white balance a lot, it can be your excuse to use RAW. It makes it much easier to change the white balance anyway you like.

It's true you can also get about the same result from a JPEG, but it takes longer. I usually shoot RAW, but I've nothing against using JPEGs for a lot of photography I know I will not be changing much. The trick is to get everything right in camera first!