Introduction To Sharpening - Part One: The Basics

Sharpening photos seems to be one of those subjects which has no real agreed-upon standards. It's mostly a personal thing, depending upon one's abilities, tastes and equipment. Some people either don't know how or just use their processing software's built-in "sharpen" function, others have complete multi-stage workflows for various display sizes and uses.

Some prefer not to sharpen at all, or don't need to because they have a camera that's sharp enough. More than one person has recently brought up sharpening and how to do it, so I'm going to address it.

Sharpening is, of course, usually required because the photosensitive medium you're working with isn't sufficiently sharp by itself and, even though the image actually is in focus, in general it looks slightly out of focus, or soft.

This is usually the case from 35mm or smaller digital sensors and film, particularly the former. The debayering process, in-camera or in the raw conversion usually introduces a little softening as everything gets averaged out (I bet the pure black and white Leica M9 and RED EPIC-M are super sharp), and of course if you're not using top-of-the-line lenses, it's almost that your glass is diffracting to some degree.

Small apertures, sensor noise, tripod quality, the list goes on. Many elements of the optical and recording processes are adding to the overall reduction in sharpness of your images.

What's That Sharpening All About, Then?

In case you don't already know, sharpening itself is the increase of localised contrast or microcontrast, on a very small scale of a few pixels, in order to create stronger visual definition in the fine details of an image, which of course simulates the appearance of higher sharpness or crisper focus.

You take any rapid changes in tone on this small scale, say from light grey to medium grey in a gradient over just four pixels, and apply a contrast increase only along those very short gradients- so the example would now be from white to dark grey over those same four pixels. Larger details though have remained the same tone, as increasing macrocontrast over the whole image doesn't necessarily, although can, increase the appearance of sharpness, it's more for increasing the definition and clarity of entire objects within the image in relation to each other.

Although the tones of each individual object are relatively unaffected in relation to each other, the small details within them are more contrasty after sharpening.

There are a couple of things to go over before I get into the sharpening proper. The first thing is that sharpening should always be the very last thing you do before saving as a JPEG for export. This is because resizing has a considerable effect on the sharpness of the image, and downsizing for web display may be the only sharpening required for some images or hardware combinations.

The other is that it may not be the best idea to judge SLR images at 100% zoom. There isn't a consumer-grade camera in existence that looks fantastically crisp at 100% crop, and if you do use that as a guide, you could be oversharpening your images. Plus, since you should have already resized for web before looking at your sharpening anyway, you would therefore be either doubling up on sharpening or are uploading at full resolution and relying on a web browser to resize your images for display.

This is not the way to present your images at their best, since a web browser's resizing algorithm isn't, nor really needs to be, as high quality as the post-processing software's. If your images look soft at 50% though, you likely have a glass, shutter speed or stabilisation problem.

Having said that, for the purposes of this article I'm going to sharpen the full sized image so that we can pixel-peep and look at noise characteristics under the most adverse conditions. With that out of the way, let's get to methods of sharpening. 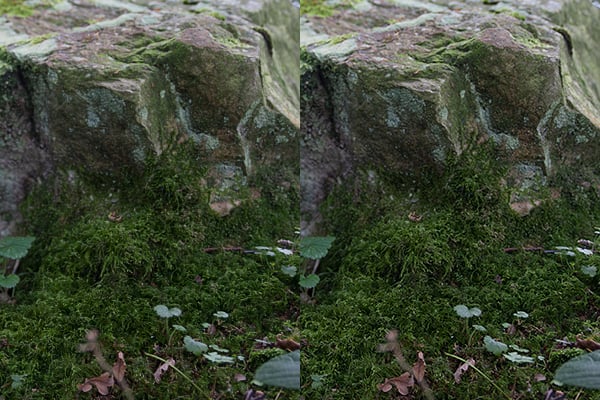 Sometimes images look soft simply because they're too low in contrast. If you haven't done any curves or other tonal adjustments on your image, that may be what it requires rather than sharpening, or at least it should be a first step in the process, allowing you to properly gauge how much sharpening it really requires.

Low-cost optics are usually the main culprit of flat images in terms of the optical process, although the lighting itself and the RAW recording format are of course factors. So if you're not rocking ten grand of L or Zeiss glass, work on your contrast before going any further. Just stick an S-curve in there and tweak it to taste.

A mild S-curve, dropping the low-mids slightly and lifting the top third a tiny bit. Not much going on, but the appearance is certainly sharper.

Once that's dealt with, let's move on to the "real" sharpening techniques. I'm only looking at Photoshop CS5 here, so names and functionality may vary if you use different software.

First, let's look at the basic functions like Sharpen and Smart sharpen, the most obvious names found in the Filter > Sharpen submenu. 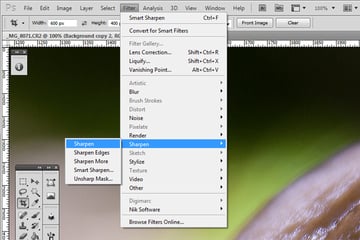 Where we're looking today. All of those other filter menus are greyed out because I'm working in 16-bit color, and they only work in 8-bit.

Sharpen does exactly what it says on the tin, and increases the sharpness of your image. This isn't customisable, though, and tends to increase noise because the radius is defaulted so small. Smart Sharpen, however, adds some control to this procedure, even allowing you to counteract mild camera shake or other uniformly linear aberrations.

However, while this seems potentially useful, the appearance of the image after all the customization isn't significantly different to the basic Sharpen. 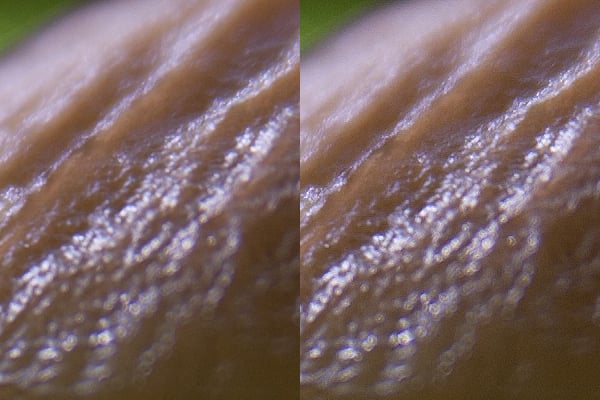 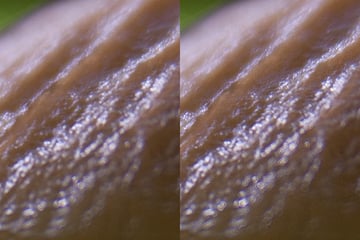 The basic Sharpen filter. Doesn't do much, but it's a start.

It's not a very smooth look, and tends to look a little too much like JPEG compression or wax crayons on out of focus areas for my liking. Still, if you want to keep things nice and easy, you could probably do worse than Smart Sharpen given the power and quality of modern built-in Photoshop functions, but you may have to mask sections off. 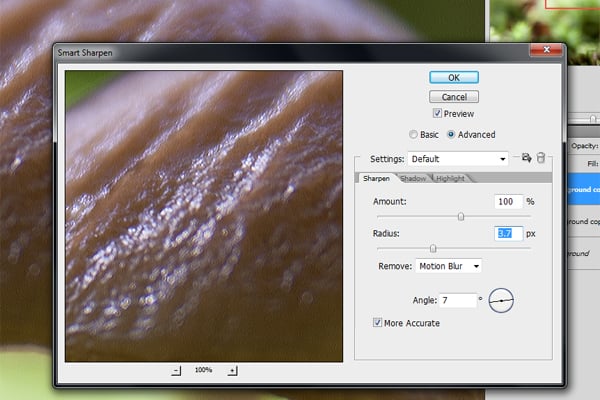 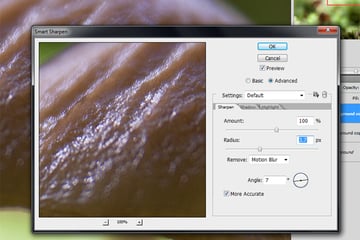 Although the sharpening itself may be hit or miss, that "Remove Motion Blur" option is quite intriguing.

The best option from that group is Unsharp Mask (often referred to, perhaps marginally confusingly if you're a Canon shooter, as USM). It's the most powerful function there, and can be used in more than one way.

The name itself seems a little odd, since it's purpose is sharpening, but, as with some other Photoshop features, like Dodge and Burn, it's a relic of the darkroom days, when photographers would create a slightly defocused version of their image on a second piece of film. This is the mask.

When the mask is sandwiched together with the original image in the enlarger, the two images would combine in such a way as to emphasise the original image's lines and edge details, creating the illusion of a sharper image.

This is how it's done 80 years later, though.

After you've gone to Filter > Sharpen > Unsharp Mask, what do the options mean? Let's take them in turn. The amount is simply the amount of contrast the algorithm introduces, as I explained earlier. The radius is the size of the area of image it pays attention to while calculating the detail in existence. Small values make it pay attention to fine detail. Large values cause it to consider much larger structures.

The threshold is how different the original image and the blurred copy must be before the filter acts upon a pixel. This is important for preventing the introduction or amplification of noise in smooth areas like bokeh, by setting it to a higher value. 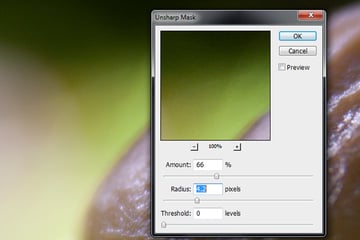 Unchecked Preview box for side-by-side comparison of noise levels. Same low-ish settings as above, but with zero threshold. Lots of noise introduced in the bokeh.

If you're looking for some settings to start with, here are a couple to get you going. Setting the Amount at some reasonably high value like 60%, the Radius around 3-4px and the Threshold at five or six levels to kill the noise is usually a good place to start for sharpening, in my opinion.

Others say around 1-2px at 100% or so and a higher threshold as a starting point, but that seems "artifacty" and overkill to me, and indeed why I tend to avoid small Radius values regardless of sharpening method.

Those numbers should provide a point to start experimenting at, though. Every picture is different, and although some people have automated sharpening as part of a high-throughput workflow, I've never found that to be a useful way to go as my particular goal with an individual image really dictates the level of sharpening I want to give it.

That's all for this installment. Check out part two for more information and a couple of more advanced techniques, one of which is my preferred method for everyday sharpening.