In this installment, I'll be looking at some slightly more advanced sharpening knowledge and techniques, stepping off from the basics we looked at last time. The final two methods I want to look at are High Pass sharpening and Lab sharpening.

These require more steps and in the case of Lab, some degree of color theory knowledge too. I'll keep that to a minimum though, since I'm trying to keep this overview as practical as possible. If you want to learn more about Lab, you can find more than you ever needed to know on Wikipedia! First up though, a quick aside on media and display.

Since nowadays it's highly likely that 95-99.9% of your work is destined for digital display and that's where you're reading this, that's why I'm only considering display sharpening. 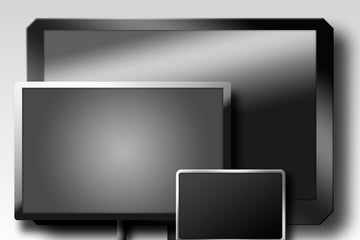 Of course, not all monitors are created equal either. I use a Dell laptop with a 17" UltraSharp WUXGA display and it's looked very impressive for over five years now. A Retina Macbook Pro will look different. If you're on a 27" iMac, that'll look different again. If you're on a $120 19" monitor from 3 years ago, you'll be getting different results completely.

Now you start to see the reason why sharpening isn't an exact science. There's no display size nor meaningful resolution standardisation. With this monitor, I've generally been of the opinion that if it looks right to me, it should be right for most people. The color calibration and sharpness seems to default to more or less correct, much like the Apple displays.

Of course, if you own a $3,000 HP DreamColor monitor, you can laugh at we mere mortals. Ok, now that I've confused you with monitors, what about sharpening? Well, assuming you're using a good enough quality monitor to be able to judge images properly, let's get started.

The smoother, more pleasing results of high pass filtering. The only disadvantage is dealing with noise.

The penultimate technique is actually my favourite one. It's fast and easy, looks good and is easily adaptable. It's called High Pass sharpening, and actually works somewhat similarly to Unsharp Mask in that it amplifies high signal frequencies. In sound, of course, that means rapid fluctuations in amplitude (ie. voltage), but in an image, that means rapid changes in tone, ie. detail.

But where USM is a passive filter where this high-pass functionality is a product of subtracting a Gaussian blurred (low-pass) virtual copy, the high pass filter is active, and specifically picks out the high frequency details. This, in my opinion, leads to a more accurate and more attractive end result. 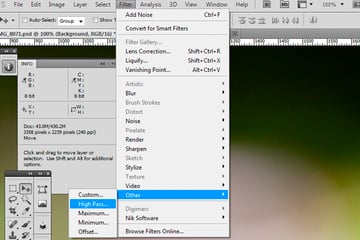 To perform High Pass sharpening, duplicate your image layer. Click and drag it to the New Layer button at the bottom of the Layers Palette. With the duplicate layer selected, the High Pass filter can be found under Filters > Other > High Pass. The only control you're given in high pass is Radius, which is used in the same way as in Unsharp Mask. The smaller it is, the smaller the details you're allowing through.

The only disadvantage of this filter in comparison to USM is that with no threshold value, it's likely that noise will be amplified, so best practices whilst shooting; tripod, minimum ISO, expose to the right, etc. When you set the Radius higher, however, the noise does start to fade away - just like when you set the radius very high, the finer detail disappears too. So, rather than using 1-3px for the Radius, we'll use 4-8px instead. This will still amplify fine detail, but shouldn't affect noise too much. Now you should be left with an odd-looking plain grey image where only the finest detail is visible. 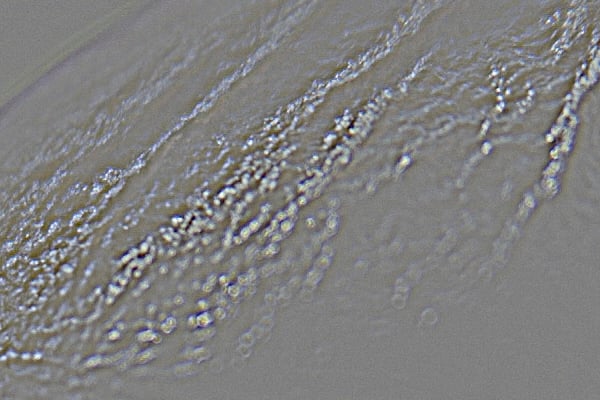 Set this layer's blending mode to Hard Light, and adjust its opacity to taste. This is the "Amount Slider," as it were. Usually it's around 50-70%. If it still feels overly sharp, it could be better to change the blending mode to Soft Light or Overlay and adjust the opacity once again rather than further reduce the opacity in Hard Light. There's a lot of fine control available here. 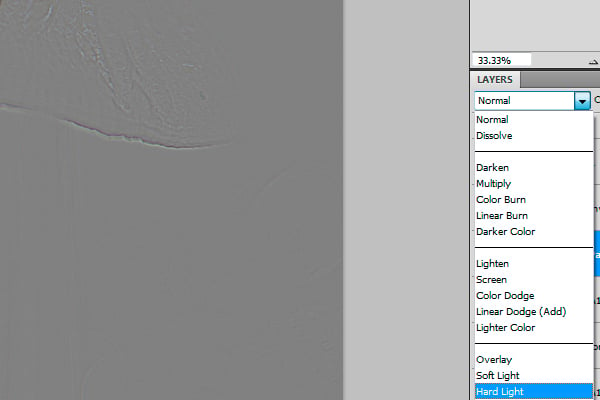 This technique also has an intrinsic masking ability by default. Simply add a Layer Mask to the High Pass layer and brush as necessary for non-destructive selective sharpening, or erase the layer itself for destructive masking.

This is possible with other types of sharpening, of course, by duplicating layers and such, but given the nature of this method it seems more convenient to me. It's also possible to use the high pass filter to soften harsh skin texture in a sort of reversal of how Unsharp Mask uses a Gaussian Blur to sharpen.

The last Photoshop sharpening method I'm going to cover is Lab sharpening, where things are going to get a little more technical. This is the most advanced technique, and to me is unnecessarily complex. I tried it out on a few photos a couple of years ago, but considering all the steps involved it's quite inefficient.

It doesn't appear to give any significantly better results to the other techniques, so I moved on to High Pass sharpening. However, I'm going to relate it here in the interests of completionism, and your mileage may, of course, vary. If you get better results from it, use it!

Lab Sharpening. Better at dealing with bokeh, but I never seem to like the overall results much.

It's a form of Unsharp Masking, but using a different color space than RGB for more chromatically accurate results. Only the luminance channel is sharpened, so there are no color shifts due to tonal manipulation of color channels.

First go to Image > Mode, and you'll see "LAB Color" in the middle of the list. Click this to convert from RGB to Lab. 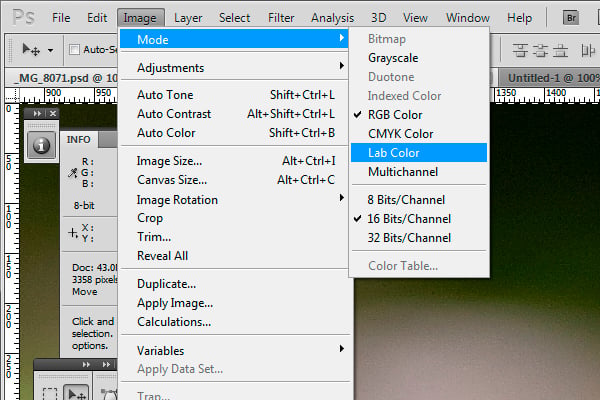 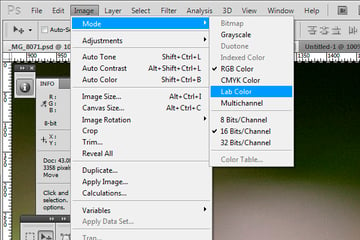 Now open your Channels palette and make sure only Lightness is selected, before going to Filter > Sharpen > Unsharp Mask, just like before.

The Unsharp Masking is just the same as we did it in part one, with your preferred settings. Now simply go back to Image > Mode > RGB Color to convert it back for saving. 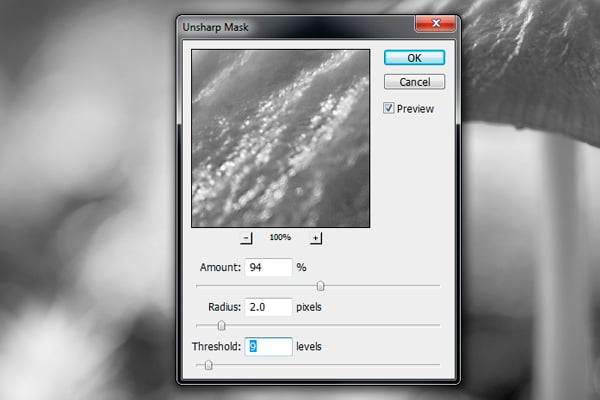 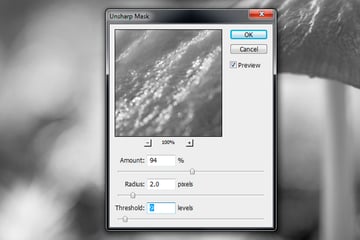 Optionally, you could sharpen twice for different sizes of object by inverting the Amount and Radius sliders. Some people consider this to result in a smoother sharpening appearance, although at these larger radii, I don't see much difference between this and using traditional contrast adjustments. 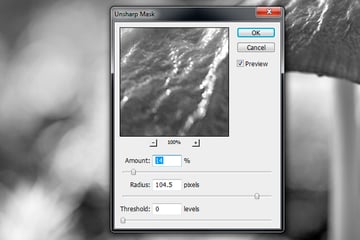 If you have color accuracy as your primary target, Lab sharpening may be the way to go. However for most people, the extra steps won't result in any visual improvement, and in fact may result in a degradation of image quality.

The conversion for an image from RGB to Lab results in some rounding errors, which are then compounded when you return to RGB space after sharpening, and as such could result in image degradation when performed on 8-bit images.

A quick aside; if you shoot RAW, always set Camera Raw to import the raw image into Photoshop in 16 bits-per-channel color, as it will improve the accuracy of all your sharpening, color and contrast adjustments, and eliminate that 8-bit banding (8-bit = only 256 shades of grey, very blocky. 16-bit = 65,536 shades of grey, much smoother) when converting and manipulating black and white images.

JPEG images are 8-bit by definition, so you can't improve those, but if your intermediate stages are more accurate, the end result will still be better. You can tell when you have banding and not just noise because A) it usually appears in bands (funnily enough), and B) if you Gaussian Blur it, it just moves around rather than disappearing.

Lab sharpening appears to me to complicate matters more than help them, and at least in my opinion, if you like that workflow, you'd be better off staying in RGB space and performing the Unsharp Mask on the lowest-noise, highest-information channel- most likely the green channel, but you may want to inspect each one first. 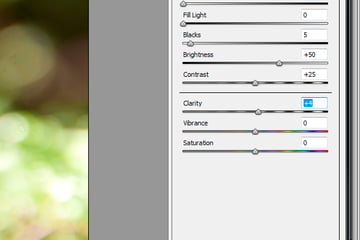 You may be wondering why I haven't mentioned the Clarity Slider in Lightroom and Camera Raw, but that's mostly because it's fairly self-explanatory as it's a single slider called "Clarity." It also depends on which version of which software you're using, as the algorithm has changed over time.

Traditionally it's a form of midtone-limited Unsharp Mask filter with a moderate radius, but more recently appears to have become more of a global High Pass filter with quite a large radius. Its behaviour can also change from image to image, so really it's down to experimentation with this one.

Personally I also prefer to keep all of my adjustments on layers within a single PSD file rather than having a CR2 (or NEF if you shoot Nikon) file with a separate XMP file to keep track of. This is one of the various reasons I went back to Photoshop from Lightroom.

There is also a sharpening panel in Lightroom/Camera Raw, but it works more or less the same as Unsharp Mask, only I find it tends to be uglier. Amount and Detail do pretty much the same thing, although Detail tends to look better than Amount, so crank that one first. Radius is Radius, and Masking is Threshold.

That's all I have for now, I hope you've found this two-parter helpful, and if you didn't know how sharpening worked previously I hope it wasn't overwhelming! Go forth, and remember: under-sharpening is almost never a problem, whereas over-sharpening always looks awful, with noise, halos and hardened graduations all over the place. So if in doubt, err on the side of caution!