By practicing other media? What? The title may sound counter-intuitive, but there's a lot to learn that is actually easier to focus on by putting the camera down. You may have heard photographers saying that learning to draw improved their photography. Did you listen? I'm going to explore the benefits of making your art without a camera to improve your photographic prowess.

Photography, as an intrinsically technological medium - from home chemistry labs to analogue/digital converters and AF microadjust - can at times be somewhat removed from the process of creation. It's not so much the layer of machinery between photographer and subject as the fact that this layer of machinery is fundamentally abstract.

Rotating a dial to change a software setting which further down the pipeline may or may not be especially noticeable can lead to frustration with the learning process, especially later on as the improvements get ever smaller while the work involved to accomplish them gets much harder. 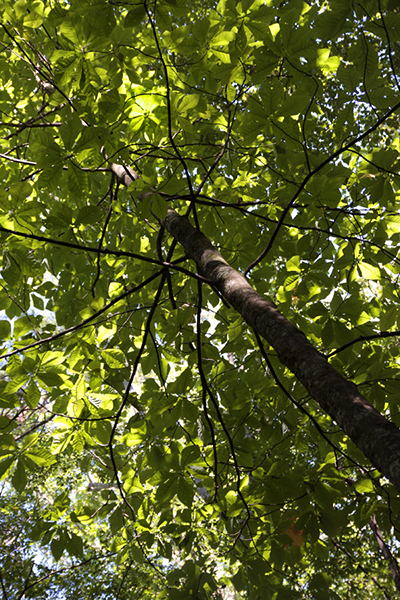 Generic beginner shot. Note the lack of attention to light, and busyness from not getting tight enough.

I've found it extremely useful to diversify my photography skills into a number of other visual art media in order to maintain a constant influx of varied influences and inspirations. Indeed, this fosters a larger perspective on the various facets of photography as a whole, leading in my case, at least, to a fairly fundamental shift in the way that I perceive photography and its role in art. 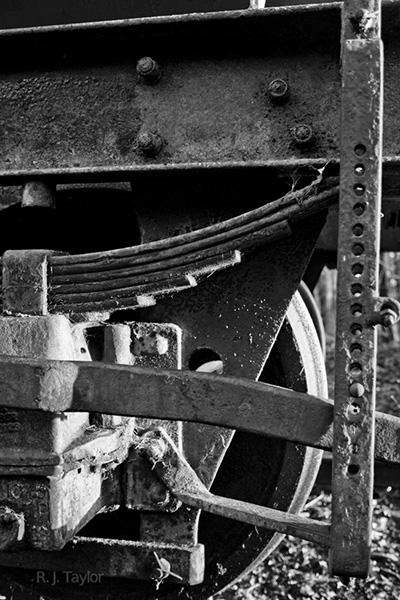 Not a terrible image, but the lighting is a little on the harsh side and I evidently couldn't bear to crop in any tighter when I should have.

That aside for the time being, I'm going to cover a handful of studies of mine, both past and present, in the hope that it may aid someone who is in the same situation I have been in the past; on a plateau, unsure how to proceed and feeling somewhat uninspired by the photography they see around them. The intent here is not to teach you how, that's far too big a subject for one article or even one website, but to point ideas out that perhaps would otherwise be unconsidered. 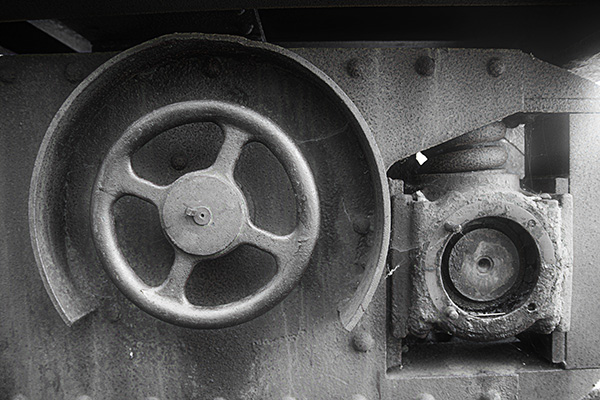 A similar, much more recent shot of a railway goods truck, but now the composition and lighting are clearly more closely observed and deliberately captured.

Let's get on with drawing. This comes directly from the quote I heard a few years ago, but for some reason filed away for later. However, once I did actually act on it, I found my photography improving as I learned to see, rather than just look. A cliché, perhaps, but for good reason.

I would say that there are two types of drawing; "sketching" and "drawing." While these have lots of overlap, I tend to define sketching as a rapid, fairly approximate wireframing art with relatively low detail, where drawing cleans up the rough lines and adds more texture and shading. Not a vital distinction, but worth quickly pointing out since I occasionally use it. 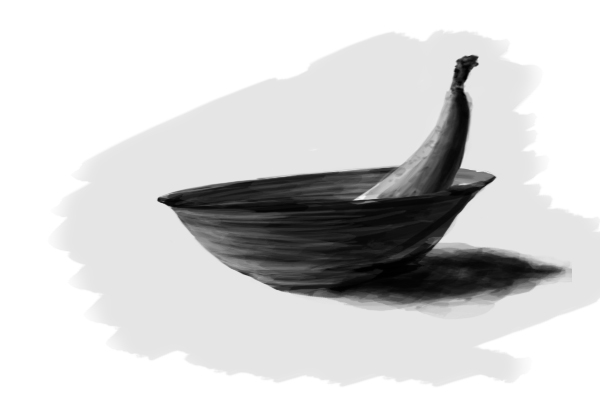 A maybe three-minute sketch with a graphics tablet, the purpose being to observe and capture the lighting within the scene.

When we look at objects, we see the labels that we've learned to apply from a young age. This is a form of shorthand enforced by the pattern recognition engine that is the primary visual cortex in our brain, allowing us to process and interpret large amounts of visual data without having to analyse every individual item in our field of view.

Sketching starts teaching us how to control this automatic filtration in order to see the actual light, shade, texture and shape of what's in front of us, rather than the pre-matched library of labeled shapes that we see in everyday life. 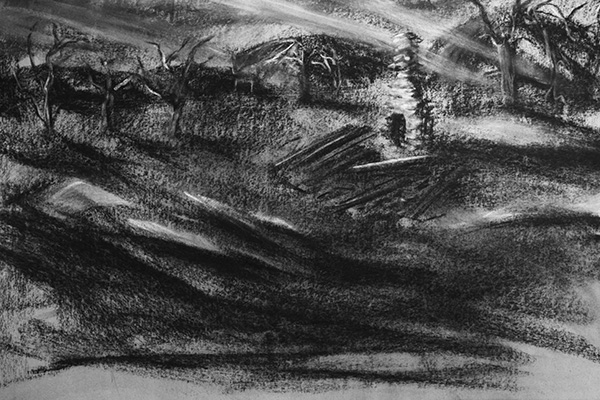 Soft pastel sketch, not exactly my preferred medium, but I felt like experimenting. This ruined house was gone in a flash, seen from the highway, so instead I tried to capture the mood of it.

This ability to see beyond the mundane is vital to a photographer, but it's not the only skill taught by drawing. Manually recreating objects in two dimensions develops one's understanding of form and and thus the effects of lighting. By formally learning to draw, you learn how to break all forms down into the five traditional artist's forms; cube, sphere, cylinder, cone and pyramid.

You can understand how these can combine and warp into all possible forms. By formally, I don't necessarily mean at a learning institution, but there are a large number of forums, artists' blogs and Youtube tutorials which can help you explore the subject in a more guided and efficient manner. 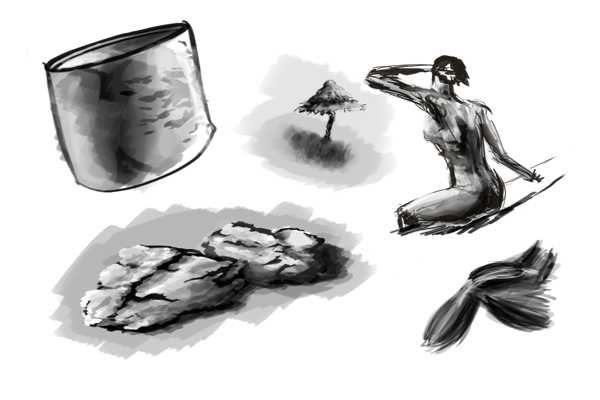 Random doodles, limited to no more than a minute each. The idea here isn't to get bogged down in photorealistic rendering, but to learn how to observe pertinent details.

A Deeper Understanding of Light

You must then know how to illustrate the effects of lighting on those forms. This means consciously knowing the appearances of, and value differences between, primary direct light, secondary bounced light, and various densities and hardnesses of shading, as well as how these vary between rough, diffuse (matte) and specular (glossy) surfaces.

In photography, where lighting tends to be taught in a rather haphazard way, many photographers don't actually truly understand the lighting setups they use. Knowing how light modifiers look by rote, and roughly how they can be combined with a little experimentation, is quite a limited form of understanding. 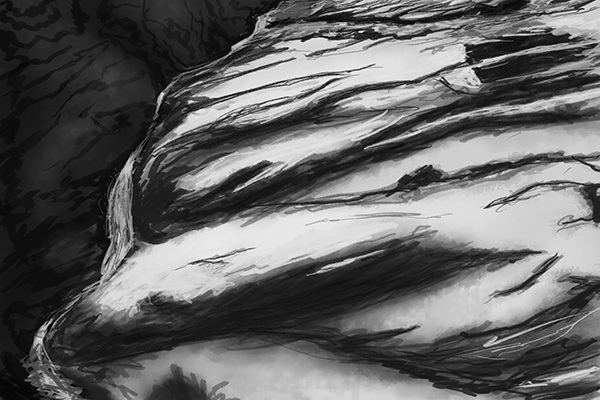 Rocky stream in North Carolina. The beauty of this was the pale rock on one side and damp moss on the other, all softly lit from a window in the rock above.

This is not a possibility with drawing, where the light must be thoroughly understood to be accurately rendered on paper. The result is not mentally dissimilar to a 3D renderer, where the geometry, surfaces and light are all known, and the physical mathematics of light propagation must be applied to these known attributes in order to create an image of them from a particular vantage point. 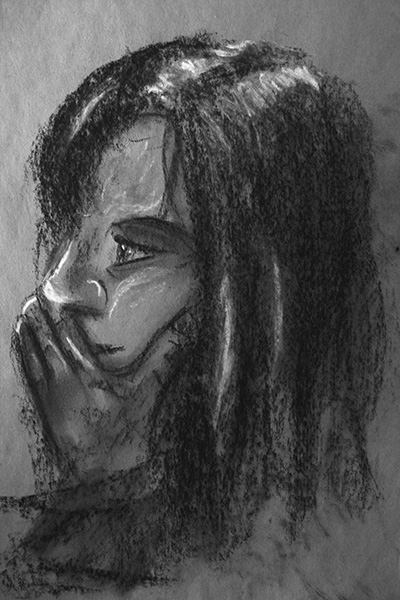 Quick sketch of my fiancée as she worked on the computer. Far from perfect, but the observation is more important than the rendering.

While I'm not suggesting you necessarily need to know the physical equations of light, understanding the effects of materials and surfaces on how light behaves will go a long way in improving your photography. 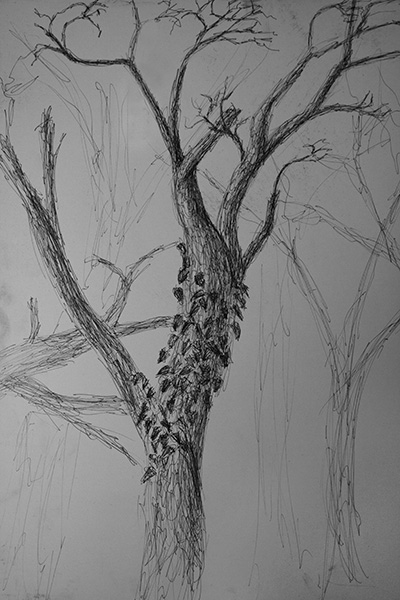 Ballpoint sketch of one of the trees in the back garden in the morning. Any medium will do when it comes to drawing. Whatever you're comfortable with.

With those tools available, a photographer can break down a scene in front of them into forms, light it from a variety of angles, select the best one for the desired effect and be able to quickly assemble a lighting setup into place, all mentally, within a second or two. Faster and more accurate lighting setup is a strong asset for a commercial environment, but it's equally applicable to being able to predict the changes in natural lighting in a location over time. 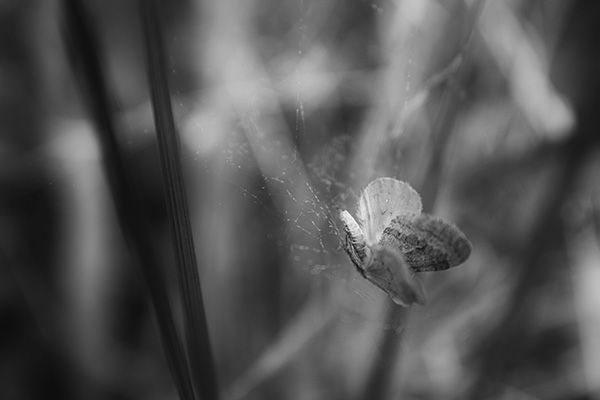 I attribute a good portion of my noticing this moth caught low down in some grass, as well as the lighting on it, to my drawing.

On top of all of these advantages, the whole learning-to-draw aspect of drawing means that you can communicate your set and lighting designs to a team in a production scenario, whether stills or video. Being able to express visual concepts and ideas in an actually visual fashion is extremely useful, and avoids over-talking, much hand-waving and likely misinterpretations. It can also be useful for a lone photographer as a method of creating notes for later reference.

Comments? Questions? Hit up the comments below!