In today's article, we're going to delve into some of the thinking and theory behind dynamic and tonal range, exploring what these terms mean and how we can best utilise them in our photography. Getting to grips with these is an important step to really understanding how your camera works, and learning how to capture a perfect representation of a particular scene.

What is Tonal Range?

A rich range of tones in a colored, as well as a black and white, image is vital to its success. In digital photography, this is limited to the sensor's dynamic range and its ability to capture a wide enough distribution of tones that would be considered suitable for the purpose of the photo.

Factors that influence tonal range of the final image include subject reflectance as well as the lighting. A high reflectance subject accompanied by high lighting results in a long span of image tones that are probably beyond any sensor's capabilities.

Light size and quality, harsh or soft, also control the tonal range of a scene. So do special effect filters such as polarizing filters that are known to increase color vibrancy and expand tonal range. Diffusers and similar light-control equipment lessen contrast thus reducing the tonal range.

As discussed in an earlier post, famous American landscape photographer Ansel Adams devised what is known as the Zone System. The zone system can be applied for obtaining correct exposures under different circumstances no matter how tricky.

Good knowledge of the zone system as well as a solid experience in applying it allow you to accurately tune your results up or down the tone scale, and to successfully contract or expand the range it occupies on that scale for technical or creative purposes.

Pre-Visualization as a First Step

In photography, we often stumble upon a scene that seems perfectly beautiful. We hurry to set up our gear, and start shooting away, only to get back home and look at the photos we got. And the result is often disappointing.

Truth of the matter is, our human visual system has a great ability to quickly scan a scene, and focus on interesting parts while disregarding the mundane. A camera and lens cannot intuitively do that, but have to be directed so that what they end up capturing in the final image is actually what we intended them to.

The human visual system is also highly sophisticated in its response to light, how it falls on different areas of a scene, and how it changes in time. For example, a person would still recognize a blank piece of paper as white whether it was appropriately lit or laying in the shade.

The human eye is also quick to adapt to differences between areas of highly contrasting light such as bright highlights and extreme shadows, or when light gradually changes its property, intensity or position such as during sunrise and sunset. This is something a camera simply cannot do.

In order to end up with a satisfying rendition of an actual scene, you need to visualize that scene before even making any exposure or technical decisions. You have to have an image in mind that you'd like the view in front of you to turn out like.

You also need to train yourself to disregard what your eyes tell you, and think in terms of your specific camera sensor and its capabilities, envisioning how light is falling on your scene, how its properties will change with time, whether that change would better serve your purposes if you waited a little longer or came back later, or if you can better recompose your shot to better accentuate your intentions.

This opens the door for an endless number of creative possibilities. Once you figure out what you want, and how you would go about getting there, the rest is just technical really.

At first glance, the black dress the model is wearing might appear to be the darkest area of your scene so you'd hurry to place that in zone III (which is a -2 stop exposure). But if you observe closely, you might find an area that falls within deep shadows constituting a tone that is darker than the black dress.

In this case, the dress would actually become a darker tone of grey, but not exactly as dark as the shadow area of your scene. Had you not noticed that, you would've probably ended with clipped shadow details in your final image.

In the same way, you might hurry to consider an apparent white as the brightest part of a scene, but after looking closely you might find out that there is actually a yet brighter value somewhere like a metal, highly reflective surface. This way, the actual white would become a very light shade of grey, not as light as the metal surface though.

Digital photography actually makes the visualization process even easier than film did. Back in the day, photographers such as Ansel Adams carried a Polaroid camera with them in order to get a glimpse of how a scene
would actually turn out with the specific settings they were set to apply.

Of course a Polaroid would just give an estimate that is not identical to print paper, but it did help them get there. In the same sense, LCD displays on camera backs can be used to help you estimate what your decided settings would yield in the end result.

The image you see on the LCD display is just the camera's interpretation of the shot taken (which could very well vary from the result you actually end up with) but it does help you get there.

Most cameras would also notify you of potential clipping in highlight areas, so you can utilize this information to better expose your shot. Or you could alternatively observe the histogram which represents the way your tones expand, and the range they occupy on the scale.

In photography, tonal range refers to mid-tone values expanding to occupy the scale between the lightest and darkest points of an image. The wider the range expands, the more contrast there is, and the more mid-tone values would be represented in the image. An image with a narrow tonal range would cover a more restricted area between its lightest and darkest values, thus mainly consisting of mid-tones and in turn, having less contrast. 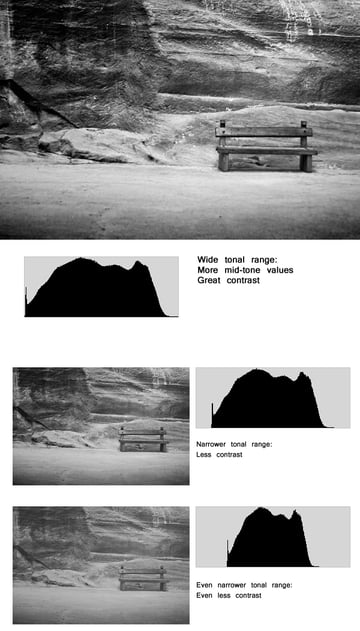 If the tonal gradation between successive mid-tone values was smooth with no areas with absent values, the tonal separation would be continuous and you would have an image with smooth transitions where brightness appears consistent and uninterrupted from one value to the next.

If, however, there were blank areas between successive mid-tone values on a histogram, this would yield a visible stepping of shades in a gradient constituting graduated colors that break into larger blocks of a single color, reducing the smooth look of a proper gradation. 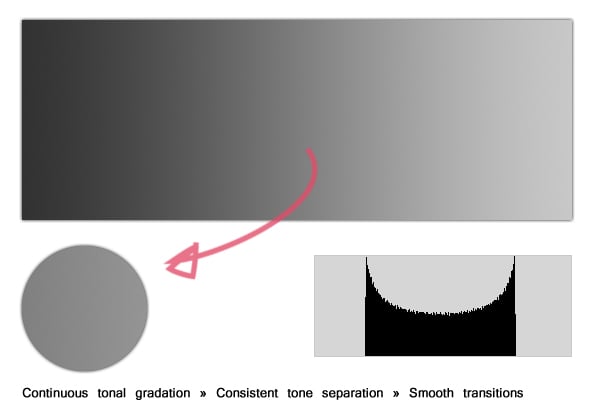 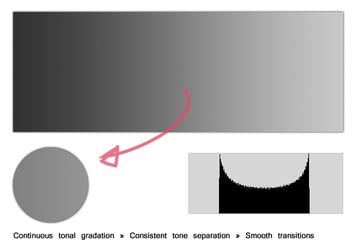 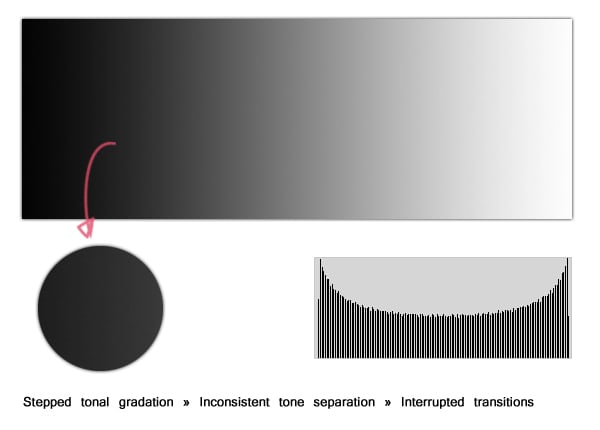 Dynamic range is the difference in light between the brightest value and the darkest value that the camera can capture. The human eye can see 24 different stops of light difference, taking into account the pupil dilation and contraction as a result of variation in light levels from highlights to shadows. 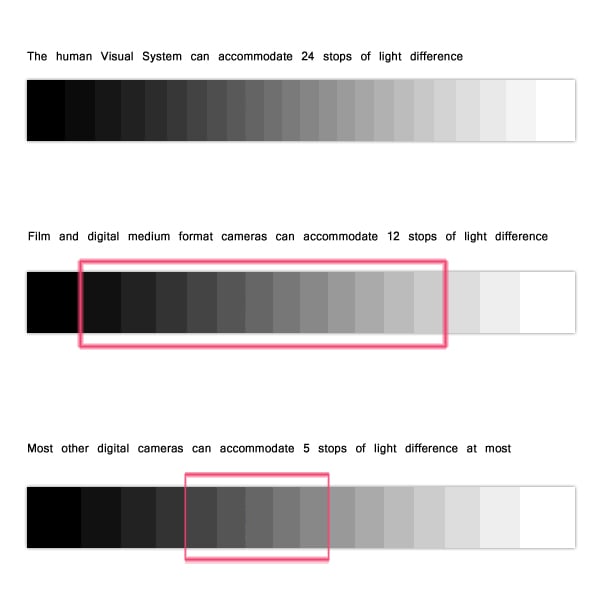 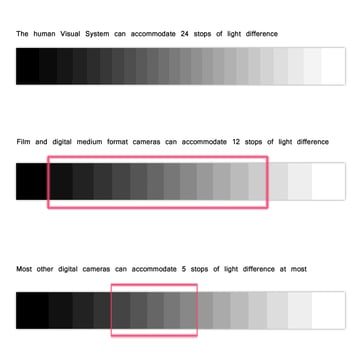 This has to do with the size of the pixels on the sensor that are used to collect light. In every pixel there is a small pit called a photosite that measures photons, which are little bundles of energy in which light travels, to determine how bright or dark something is. So the larger the photosite, the more photons it can measure (more on this here).

This means that it hits a white point, and all highlights get blown out much faster than it would with a larger sized photosite which would give your camera a larger dynamic range. Another solution would be to measure for the highlights - we would have great highlight details, but then our shadows will be with no detail and represented as too dark.

If you're not looking into shooting HDR photos, another way of working around insufficient or unsuitable available dynamic ranges would be to manually alter the actual dynamic range of the scene if it was too high or too low, to fit your needs.

One example of contracting the available dynamic range of a scene would be the use of fill light. Instead of exposing with slower shutter speeds and consequently blowing out brighter areas of your scene, you could use a fill light (a strobe or reflector) to lower the contrast between the dark and light areas of your scene, thus contracting the dynamic range so that your sensor can handle it.

On the other hand, an example of expanding the available dynamic range would be the use of special effects filters, like a polarizing filter for instance, which as we've mentioned earlier enriches colors and expands the tonal range thus ending you with a higher dynamic range version of your scene.

The most significant factor in taking any photo is to find the exposure that best suits the situation, and accentuates your intentions and the effect you're after all at the same time.

There are some technical issues involved here such as scene and sensor dynamic range, key parts and priorities of your scene, measurements and so on. But the true essence of any one photo you take is way beyond all that. You won't be able to capture it until after you get a complete grasp on the more technical stuff, but a true photographer takes all this technical jargon and tempers it with judgement and creativity.

Of course it might be safe to say that for every situation there is one rendition that most people would agree upon as being correct. The truth is, limiting yourself to what's correct and what isn't is risky, in that it will prevent you from what achieving what you, as a true photographer and individual, are really after - self-expression and creativity.

Diana Eftaiha
Diana Eftaiha is a software engineer. You can visit her website at www.dianaeftaiha.com
Scroll to top
Looking for something to help kick start your next project?
Envato Market has a range of items for sale to help get you started.