No matter how far the technology in our cameras advances, nothing can replace the judgment of the human eye. What do you do when the camera doesn't see the scene the same way you do? In this tutorial, we're going to learn about tweaking your images with exposure and flash compensation.

How does a camera know what settings to use for a photo? Even when you're in manual mode, the "bar" in the viewfinder of your SLR is going to show you how it feels about your settings in relation to the amount of light it perceives is in the frame.

The bar with notches at the bottom relays information from the camera's metering system about how over or underexposed your settings are for the given scene.

This is known as metering. The camera's metering system is tasked with determining the amount of light in a scene and helping you to select the proper settings to make the correct exposure.

However, this system isn't always perfect. No matter how far technology progresses, it's hard to imagine a day when the metering system always selects the proper settings. Also, keep in mind that metering systems can’t take into account the “art” you are trying to create.

Before understanding how to alter exposure compensation, we need to understand how a camera determines the amount of light in a scene. First of all, we are going to take a look at the metering modes that are available in most cameras. For my examples, I am using my Nikon D300 (and D90) to illustrate metering modes. However, the modes and metering readings are roughly the same across every camera maker. Slight differences do occur across individual cameras and lenses, which I will illustrate. 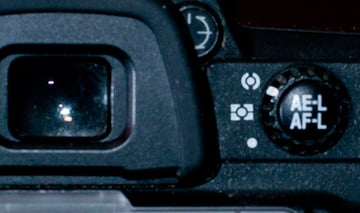 Shown above are the metering modes from which you can select.

The first metering mode is 3D Matrix mode. Canon calls this “Evaluative” mode. If you’ve never played with the manual settings of your camera, this is probably your current metering mode. This is a metering mode that takes into account the entire scene, the compares it to thousands of other patterns of light in its memory, and selects the best settings. This is why tricky light situations like backlighting can sometimes still be correctly exposed automatically.

This metering system is probably what you will use the majority of the time, and continues to become smarter as technology advances.This doesn’t mean that everything will be lit in the way you envision it – which is where other metering modes come into play.

Nikon's center-weighted metering symbol at left with Canon's at right.

The next metering mode is center weighted. With center weighted metering, the cameras computers don't try to compare the scene to anything . It gives priority to the center of the frame (usually 60%) and then considers the rest of the frame and creates an average.

I often use this for portraits that fill the majority of the frame. Center weighted metering was the standard for decades and is sometimes more useful than Evaulative / Matrix metering because it can be more predictable.

Nikon's spot metering symbol at left with Canon's at right.

Finally, the last metering mode that we're going to take a look at is spot metering. This is a type of metering that focuses on a very small area of the scene, and ignores the rest. This is useful in a number of situations. Often times at weddings, while making a photo of the rings,

I select spot metering mode. The ring will often be in either a relatively dark or bright area, and using spot metering allows me to ensure that the ring itself is properly exposed. Ultimately, spot metering is very useful in high contrast scenes where it is important to properly exposure for a very specific part of the frame.

So now that you know how a camera evaluates the amount of light in a scene, let's take a look at how we can alter how the camera perceives it, as well as some situations in which it comes in handy. The first thing that we're going to look at is exposure compensation, which involves tweaking exposure levels.

Exposure is expressed in stops. If you're not familiar with this measurement, it is standard for expressing light in photographic terms. Stops are steps on the light measurement scale. If you are not familiar with "stops" of light, the basics are that one stop of light is equivalent to a halving (or doubling) of any of the three main factors that control the amount of light: shutter speed, aperture, and ISO.

A Note About Compensation

While recently explaining this concept to a friend, he asked "If I'm in manual mode, can't I just underexpose or overexpose the image on my own by altering the shutter speed or aperture?". The answer to this question is yes! However, if you're in aperture or shutter priority, dialing in exposure compensation will adjust for the discrepancy between the camera's metering system and your photographic vision up front.

Now let's look at how to use exposure compensation, as well as the situations which make it a necessity. For these photos, I have my camera in aperture priority which allows me to set the aperture and ISO and the camera to choose a resulting shutter speed. 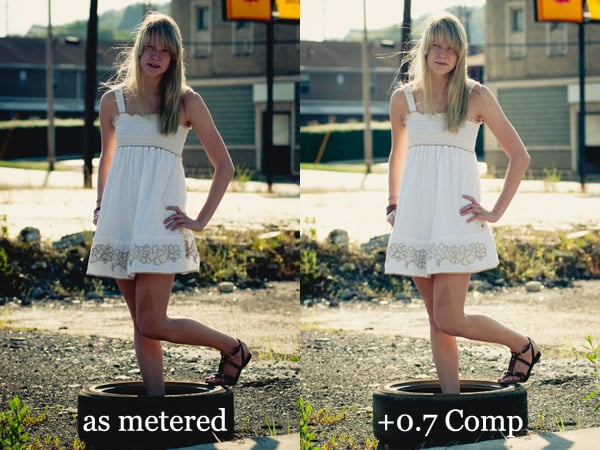 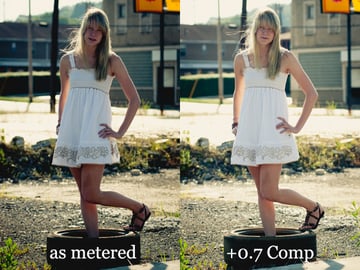 In this backlit portrait, I used exposure compensation to tweak the exposure properly. 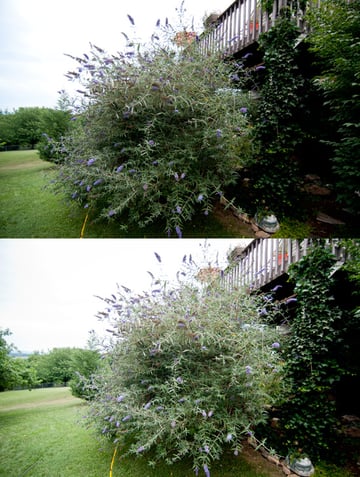 I find that my Tokina 12-24mm lens makes photos a little dark by default (top), so I add exposure compensation (+0.7) frequently, shown at bottom.

The usage of flash compensation is nearly identical - measured in stops, dialed in in relation to those stops. Flash compensation doesn't really apply if you're in manual power mode (on the flash) because you would have already selected the output level of the flash.

I use flash compensation all the time. Without it, I simply do not get the look that I want with on camera flash. Although I love having the time to setup off camera flash and tweaking everything perfectly, wedding photography often calls for on the fly, run and gun flash usage. For my examples, I am using iTTL flash mode and dialing in flash compensation.

The on-camera flash look is not a flattering one. Flash master Neil Van Niekerk shared his philosophy that the use of flash is best done by "seamlessly blending the flash with the available light to the point where it isn’t quite discernable whether flash was used or not." With a speedlight, an omnibounce style diffuser, and a little exposure compensation, this is totally doable.

Typically, I dial the flash down by 0.3 or 0.7 stops right off the bat. This provides the "kiss" of light that is complementary but not overwhelming. Below is an example of using this method to provide a more balanced effect. 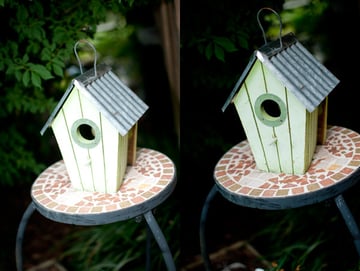 In this photo, I dialed the flash down two stops because I was working at close distance. This allowed the flash to fill shadows without overwhelming the scene as it did on the left.

There are also scenarios that call for increasing our flash power. Bouncing off a high ceiling? Increase your flash compensation to account for the differences.

Flash and exposure compensation are two tools that you can use to get the exposures that you are looking for. Tweaking these two settings and getting the shot correctly in the camera is a huge advantage. Post your tips for using exposure and flash compensation in the comments below.