With over 500,000 apps for the iPhone and a growing amount for Android and Windows mobile devices and smart phones, the ability to capture a picture anytime, anywhere is reaching a tipping point. It is moving from fanciful gadget to quality image producer. The latest cameras on these phones are moving into the realm of useful optics and image quality.

But one thing holding back these pint-sized lenses is the sensor behind them. It has long been the bane of digital photographers everywhere that the dynamic range of their DSLRs and point and shoot cameras did not match what their eyes and brain saw. It is true that current cameras have a practical dynamic range of about 7-9 stops of light (EV), while the human eye can capture about 14 stops at any given point of time. Couple this with the fact that slide film has a range of about 12 stops and you can see why current digital cameras are lagging.

And thus, the computer world started crafting a solution to the problem it created and has called it HDR. For now, HDR stands for High Dynamic Range, meaning something larger than what the camera spits out by default. It is a useful tool to get images closer to what the human eye and brain experience in a given situation but it has its limitations. In this article I will touch on some tips and suggest an app that I have found useful in creating iPhone images with more dynamic range. 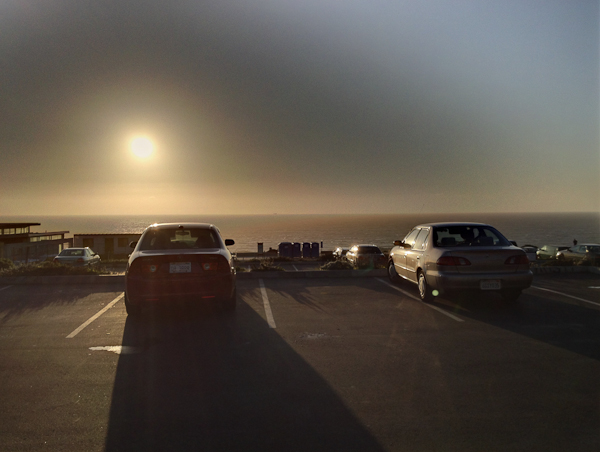 Eeek! Past the limits of the app

The thing to realize is the HDR images you will get out of your mobile device are not currently up to the quality achievable with a DSLR and a quality HDR program costing $100 or more. But that is ok. Eventually phone apps will get there. All of the apps I tested only allowed 1, 2 or 3 images to be shot when the best results happen from upwards of 7 or 9 images being shot at various EV settings. Don't sweat this limit too much, just know that it is there.

What this comes down to is not pushing the limits of dark and light in a scene beyond what the app can handle. It takes some trial and error, but I have found a good rule of thumb to be; if you have to squint while looking at the darkest areas of a scene, because of the brightness in the other parts, you're not going to get a good shot. Let me show you an example of a shrub in dark shade and a bright, but overcast, day from my local coffee shop. 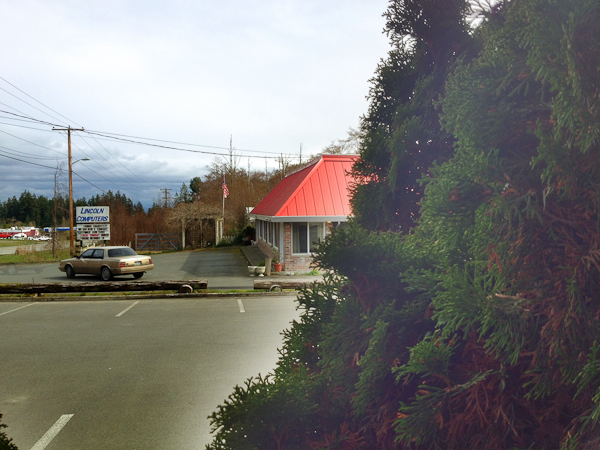 Notice the white fringe between the shrub and the parking lot? This is because the limits of the app are reached and the sky is quite bright. It's best not to attempt a shot in this case with the limits of this app. This hard line between dark and light is always problematic in HDR, just as it is for our eyes in real life. When possible, avoid very sharp contrast for a more realistic look.

Another limitation is the scene you are shooting and this is the same for DSLRs or smartphones. The basic premise with shooting HDR images is that multiple images are shot at different EV settings. This means a certain amount of time will elapse between shots. As the images are then combined, this can cause 'ghosting' of objects which are not in the same location in each shot. Look at your scene and plan how the shoot will happen. If there are objects close or moving fast, timing will be important. The more static the scene, the less chance you will have of ghosting.

This also goes for you, the photographer, and moving while shooting. You will need to be still when using apps that take multiple images. If moving, a single shot app might be more useful. The image below is an example of slight movement and what it can do to a program that doesn't correct for this parallax. 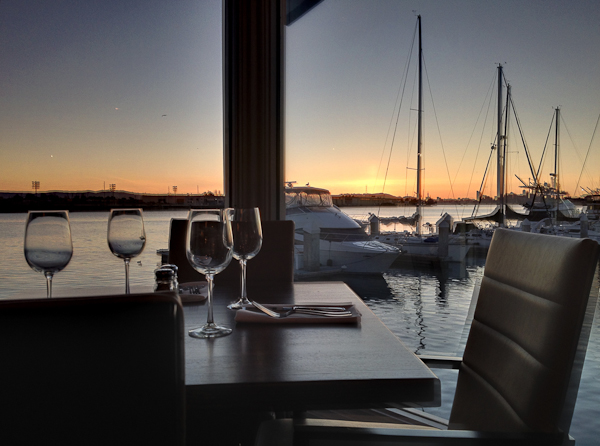 And this zoom shows what happens when the subject moves.

The last issue deals with the nature of the phone as compared to a DSLR or P&S camera. Most cell phones and smartphones don't have a tripod mount. When shooting HDR, it is helpful if the multiple images are shot from exactly the same perspective to save time trying to line up the images in the computer afterward. The same is true with smartphone HDR but these phones lack a tripod mounting hole. There are solutions on the market, like the Joby Gorillamobile which can attach to a special case for the phone and give you the best chance for accurate image overlap. The best apps have the ability to further align the images, knowing that humans have a tendency to move. Look for an app with the capability.

The Best Conditions For Shooting HDR

Knowing when to employ the HDR capabilities of your phone and when to leave the scene be is an art that takes practice. With repetition, you will start to recognize scenes for their dynamic range and if HDR is needed. You will also get good at predicting if there is too much movement in a scene to attempt HDR.

To help shortcut your learning curve, let me offer some prime times to employ HDR apps: 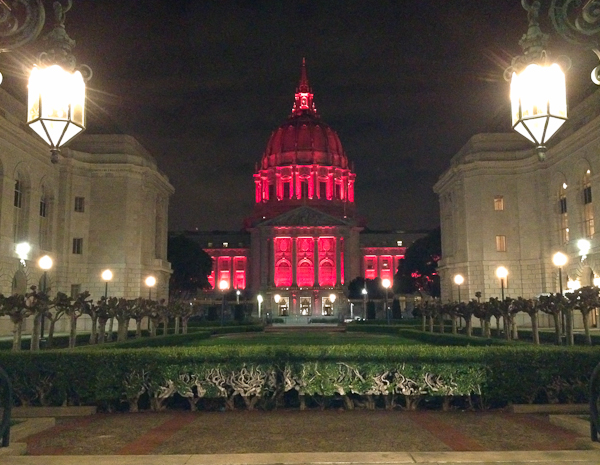 The easiest way to determine if HDR is needed when you are just getting started with the technique is to take a shot using a normal camera app. If the shadows are too deep or the sky is blown out, then try an HDR app. The nice thing about these apps is they are always be with you!

My HDR App Of Choice: ProHDR

I've tested a number of HDR apps for the iPhone, including ProHDR, TrueHDR, HDR Fusion and the default HDR capability of the iPhone 4s. Of these, I have enjoyed the capabilities of ProHDR as well as the images it produces. I should also note that the default iPhone Camera app works fairly well, but without some of the adjustability that ProHDR has. Of the four, I found HDR Fusion to give the least usable results.

ProHDR is $2 for both the iPhone and Android and comes packed with useful features. Let's step through the shooting process to see where its strengths and weaknesses lay.

Right out of the (virtual) box, the app is ready to go. It uses a full screen tap feature so you don't have to aim for a small shutter activation button. It has a zoom slider on the bottom and the ability to turn on or off the flash (which will leave the iPhone LED illuminated constantly rather than actually flashing it, handy as a backup flashlight). Buttons are also available for using the rear facing camera as well as overlaying the screen with a simple Rule of Thirds grid.

That button at the bottom for Settings brings up the following screen.

Geotag and Share Resolution are two of the more important sliders. If you don't want everyone knowing where you shot your images, turn this off. Also, if you have a limited cellular data plan, choosing your Share Resolution is important.

Once you are ready, press anywhere on the screen and the app takes over, first telling you to not move a muscle. It will change the EV on the phone from bright to dark to check the best exposure settings to use in the two images it will take (personally I wish this was set at three instead of two, but there is always hope when they upgrade). If you don't want to use the auto process, you can manually select the metering points to fine tune your images. 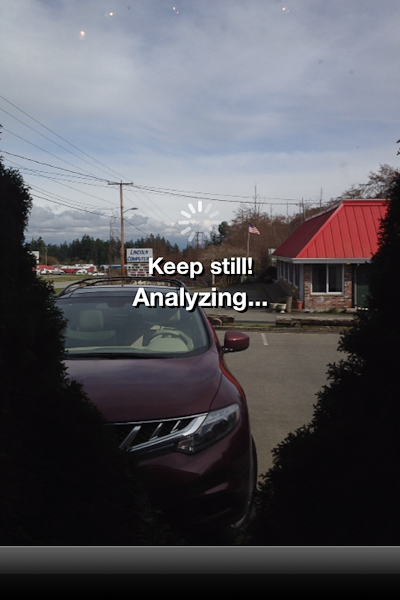 After analyzing the screen, the app will take two pictures. 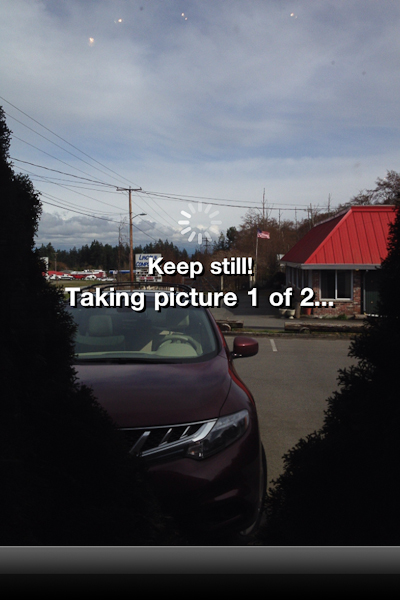 It then kicks into the editing screen. 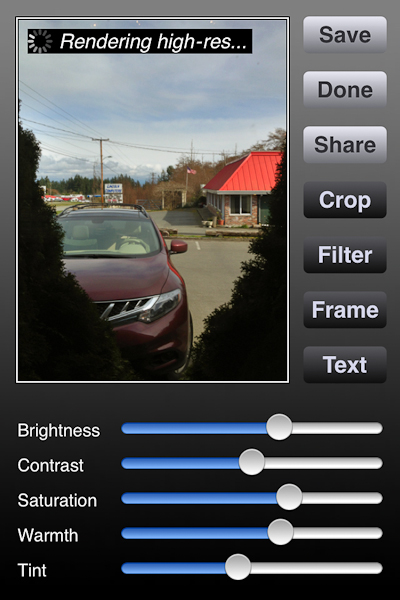 This screen will allow you control over the final image if you desire. The sliders increase or decrease: Brightness, Contrast, Saturation, Warmth and Tint. If you like the image as it stands, simply press Save and the image will be placed on your Camera Roll. Pressing Done will give you the chance to back out of any changes and cancel saving. Share brings up the following options: 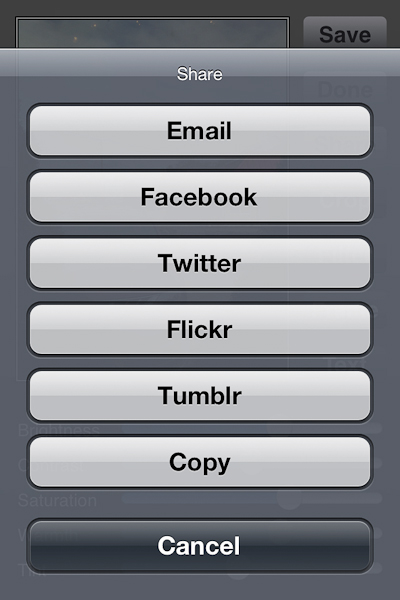 Crop is for getting rid of areas of the frame you do not wish to be present. Filter offers 21 of the normal image filters which have become popular. Frame adds 15 stylish frames. 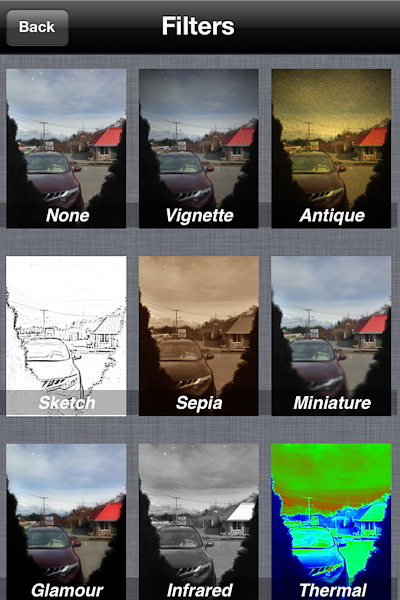 When all is finished, I have been happy with the results this app produces. Here is an example of the previous scene as first shot with ProHDR and then with the HDR feature of the iPhone Camera app turned on. 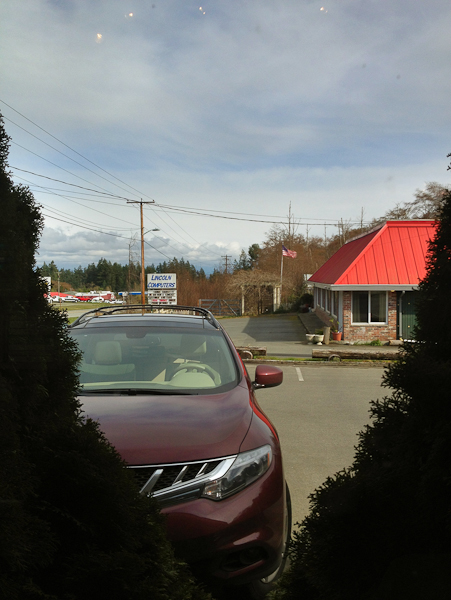 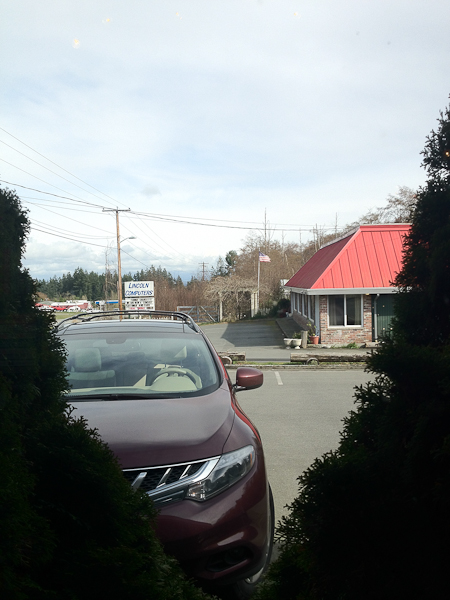 Notice the difference in tone and saturation in the sky? The colors in the ProHDR version appear more solid and less blown out to me. When done well, an HDR image shouldn't be easily identifiable as such and I would say this app does the job well when the limitations are taken into account. It is not a replacement for a DSLR and a dedicated program meant to run on a desktop or laptops machine, but the quality is coming around.

Whichever app you choose to shoot HDR, the technique can take practice to master, as with any art form. The first step is realizing your images can have more latitude and then deciding if an HDR app will work best for you. From there, you will need hold still (or invest in a phone tripod) to make your vision of what is in front of you something worthwhile to share with friends. 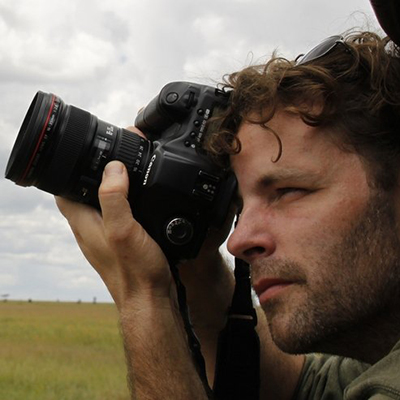