Paul Harcourt Davies: Getting Close Up to Macro Photography

Paul Harcourt Davies has been invited to speak at WildPhotos 2012, a must-see event in the wildlife photography industry calendar. This year it will take place on the 19 and 20 of October at the Royal Geographical Society in London. We recently interviewed Davies about his conservationist and close-up work.

Davies says that "virtually all the projects I am now involved with have an element of ‘close to home.'"

This is the second time Davies has been invited to be a speaker at WildPhotos. He was there in 2008 and is returning. He considers "an honor." Currently based in Italy, Davies is a British writer, photographer and passionate environmentalist who has written 17 books (running to 46 editions in various languages) and numerous articles for various publications.

He is a member of the Meet Your Neighbours project (MYN), a collective of photographers who want to show the world the wildlife living close to our own doors. This is a natural option for Paul as "virtually all the projects I am now involved with have an element of ‘close to home.'"

That was the subject of the presentation he gave at WildPhotos 2008 and something he is deeply committed to. Raising awareness of "what is around us through my photographs and also… ensuring the highest possible standards of integrity in nature photography, without that," he continues, "credibility vanishes." 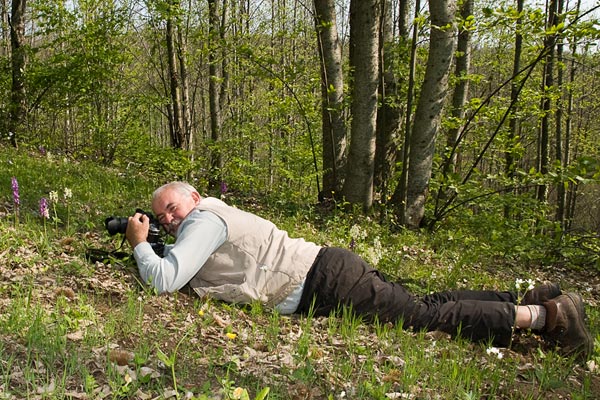 Davies at work, during a photography close-up session, something he has done for years.

This year Davies has two presentations at WildPhotos, one on the 19th October, "Close focus and wide angles - Micro and Macro tips" and on the 20th a second theme that interests him, "Publishing that Book - Print or Electronic?"

Davies does a lot of different types of photography, but is a macro and close-up specialist. We talked about that topic and the use of today's cameras. We also spoke about his last published book, Digital Close-up Photography Q&A, that first sets the basic rules for this type of photography and afterwards seems to break most of them. 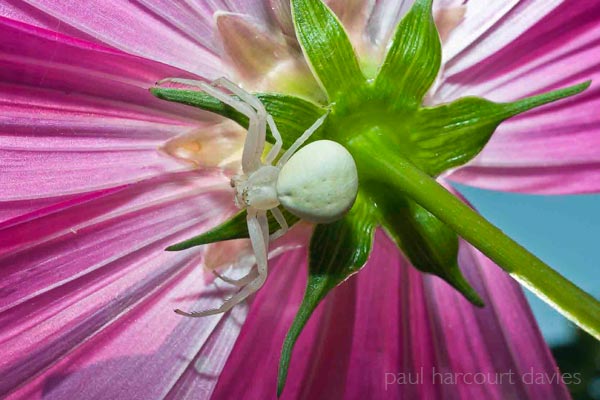 Davies says that photographers have to come to grips with the basics and then forget them.

Phototuts+: Many of your close-up photos, also those present your recent book, reveal that you're using wide angle lenses for a lot of your work. It's as if you're trying to break the rules as telephoto lenses are usually the macro lens of choice. Do you feel people have to break the rules to achieve their own goals?

Davies: I have always had that slightly perverse tendency not to go with the flow. Even as a kid, I avoided things if everybody else did them. However, my use of wide angle lenses is first and foremost linked to the way I like to portray information about nature

For example, with a wide-angle lens used close to a subject you can depict it in the context of its background. In a single shot, you've included subject detail and also said so much more through its surroundings.

Then again, I will often use telephoto macro lens that pulls a subject out of its background isolated against a soft blur. I also enjoy using backlit white panels, the MYN approach, which really does make you see familiar subjects in a different way.

What I want is for people to take what is there in the book, move on and make it their own. Recipes are too restricting, better to show someone how to "cook!"

Pt+: How hard is it to learn the rules for close-up photography, and then go and break them?

PD: When you start moving close to subjects there seems like an awful lot to learn and remember. But it happens quickly and what I try to encourage people on my courses to do is to come to grips with the basics and then forget them. The technical stuff becomes second nature.

If you can achieve a mastery of your camera and its capabilities, then that frees you rather than restricts. It's a bit like being a musician, go through all that hard practice with scales and arpeggios and a much wider world opens up in front of you.

All I can say is persist and I promise you that very quickly you get results that delight both you and everyone else who sees them.

Davies believes that APS-C sensors are not just adequate, they are perfect.

Pt+: What is your advice for a newcomer to this area? Is there an essential kit of gear to buy?

PD: You really do need comparatively little in the way of equipment to get you close. Even mobile phones can produce incredible results. The basic need is for a camera that doesn't restrict you and that possesses some means of close focusing.

Many lenses have a close-focus facility built in (wrongly called a ‘macro-mode') but, to get closer still you will need some help: a macro lens, extension tubes or auxiliary lenses that you screw into the filter thread of the camera.

Start gently. Get familiar with the equipment you have. If you see a stunning butterfly on a flower in front of you then you don't want to be fiddling about with the controls. That's what I mentioned earlier, spend time ‘playing' so technique becomes second nature and leaves you to concentrate on the subject.

Time and again I have seen people go out, buy a top of the range DSLR with expensive macro lenses and then be devastated when the results are poor. The good thing is that with mastery of just a little bit of technical expertise, the difference is incredible.

Pt+: Although you come from the film era, you seem to be enthusiastic about digital cameras and the immediate feedback they give you. Do you think there is a lower the learning curve for photography now?

PD: I am not just enthusiastic about digital cameras I am passionate about them and the capabilities. This technology fits hand in hand with my great love of the natural world, the engine that drives me along.

I used a D100 as soon as it came out over a decade ago. I'm positively evangelical about what can be achieved by anyone with today's camera technology. All it takes is a little patience and the willingness to experiment.

Modern cameras make it much easier to get things like exposure and focus spot on so there is less need to concentrate on these initially. You can rely on the camera for so much but, if you want to explore and extend your vision, then it helps to know a bit more about exposure, dynamic range and white balance, for example. 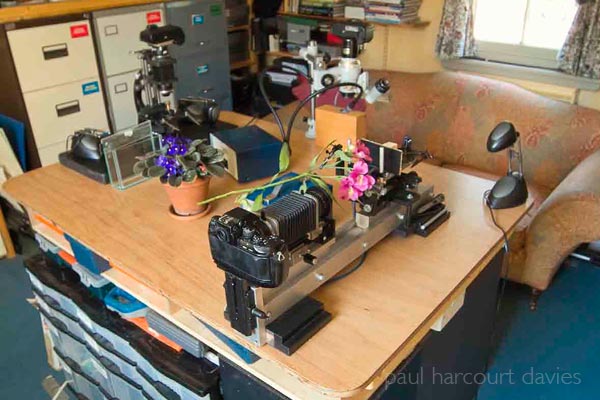 In his recent book, the author explains how to set up a small studio for close-up photography.

Pt+: You have adopted digital cameras, but you seem to not follow the general trend, and state that a 12 megapixel camera is more than enough.

PD: Advertising has been described as the business of selling people things they didn't know they wanted. One successful way of doing that is by making people feel inadequate, about their looks, the car they drive, the house they live in and so on.

In photography, the business of “my sensor is bigger than yours and has more pixels" has been part of a deliberate drive to sell camera models. It is interesting that some of the major manufacturers are beginning to go against this. Not everyone needs to produce wall-filling prints after all.

Pt+: In terms of sensors size you also use APS-C. Does it mean you don't think a full frame sensor is needed?

PD: An FX sensor is primarily useful in macro work because of its low light, low noise capabilities, it opens up those areas for you. However, for reasons I go into in some detail in my recent book a smaller sensor has certain advantages when it comes to perceived depth of field for example.

The crop factor with the smaller sensors can also be used to your advantage when you are generating enlarged images of small subjects. I believe those APS-C sensors are not just adequate for most people developing an interest in macro, they are perfect. To me they suggest the future direction for this kind of photography.

I have seen incredible results taken with such cameras. They are easily portable and because you get great depth of field at f/5 .6 or f8, you then end up using fast shutter speeds that reduce the problem of camera shake. They make natural light macro easier. Their sensor sites are closer together and, in theory, that means higher resolution of detail.

However, there's a lot of other things that come into that melting pot with the main one being how the information from the sensor is then used to construct the image, the trickery used for reducing noise and so on in those elusive algorithms. There are some very bright people out there working on these things for the advantage of those of us who just like going out and taking pictures.

The cover of Digital Close-up Photography Q&A, a book that answers many of questions about macro photography

Pt+: You seem to be very excited about the available technologies today. What projects are you working on and how much do they involve the use of technology?

PD: Well, I've also been working on image-stacking and more control of the camera from a MacBook Pro. Building things and experimenting has always been a part of my nature and everything seems to come together with digital technology.

I find it very hard to keep my enthusiasms to myself. It may not make commercial sense but I don't have secrets. I also contribute to two blogs, something I love doing because of the freedom of expression, and through one of them, I am collaborating with my fellow blogger Clay Bolt on a series of eBooks that will deepen areas of macro photography in a way that could never be done with a conventional book.

We're both passionate naturalists and photographers, whereas I bring a ‘technical' background to the table, Clay is a really gifted designer. So, watch this space. I love this day and age for the control it gives me to do things at home:. It is up to us now, no excuses!