Making choices about cameras is always tough. Do you pack a huge DSLR with great image quality or would you rather choose a point-and-shoot that you will actually carry? With the latest class of cameras, you can get the best of both worlds with fantastic image quality and portability. Today, we'll take a look at Micro 4/3 and other mirrorless cameras.

One of the greatest appeals of these cameras is the combination of image quality and portability. From personal experience, toting around a full frame DSLR with big lenses is something I don't enjoy on a day-to-day basis.

When it comes time to work, I love the image quality that it provides, but I often find myself leaving this combination at home (thus decreasing my total number of photographs made) when I should be carrying it to capture life's in-between moments.

What does all of this mean? Lightweight, lower cost lenses. The technology that can drive better image quality on smaller sensors has encouraged movement toward these cameras, and the image quality is certainly on par with entry-level DSLR's. With the greater crop factor, manufacturers can also create lenses that cover a greater range of focal lengths.

Another feature of these cameras that seems to divide people is the electronic viewfinder. We're all familiar with the classic optical viewfinder that allows us to view our scene through a peephole. These cameras evolve on this by being an electronic view of the scene; imagine a super tiny LCD screen if you've never used one. The technology is still improving and offers the ability to superimpose all kinds of useful (and customizable) information on top of the scene.

Image quality? Check. Portability? Usually the case. Lenses? They're trickling out slowly with more manufacturers jumping on board. It's not hard to see the values that these cameras are bringing to the table.

What's in a name?

From the title of the article, you'll notice that I applied the term "Micro 4/3", but this may not be the best term to use. Micro 4/3 was simply a specification (or format) created by Panasonic and Olympus in 2008. This sensor size is half of the full frame size, so lenses get a 2x crop factor.

However, plenty of other options exist that span a variety of features, sensor sizes, and some of the other terms that I've heard applied to these cameras are EVIL, short for "electronic viewfinder, interchangeable lens", and simply "mirrorless", meaning the camera foregoes the pentaprism and mirror in the camera. Other people simply call them "system" cameras, meaning that this line of cameras is simply part of a series featuring commonly interchangeable lenses.

The truth of the matter is that it's very difficult to get everyone to agree on anything in the photography community. And with every technology, it constantly changes, so the definition and standards for this class could be completely different by this time next year.

Don't get hung up with choosing a specific term, because it will almost certainly exclude a camera that someone else would call similar. Regardless, the things I look for are a fairly large sensor, interchangeable lenses, and a manufacturer's commitment to the system.

Panasonic's DMC-GH2 is one of many offerings and is built more like a DSLR than many micro 4/3 cameras.

Perhaps the best known mirrorless class, the Micro 4/3 format is a great joint effort between Olympus and Panasonic that really kicked off the trend of this camera class.

Dozens of true Micro 4/3 cameras are available. As mentioned above, the half frame sized sensor (compared to full frame) is not as big as an APS-C sensor, but still dwarves many of the point and shoot sensors that are out there. The image quality that these cameras can produce are fantastic, and the system has certainly grown.

Even better, tons of lenses are now available for the system. Third party manufacturers like Sigma have started jumping on board to produce lenses. If you're interested in jumping around, this system is a great bet with the support of multiple camera manufacturers and many lenses already available. 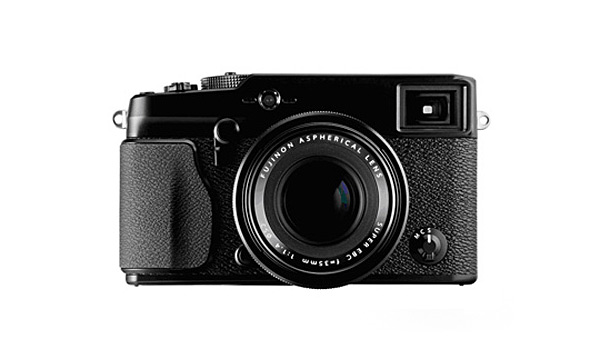 Fuji's X-Pro1 is one of the newest mirrorless camera and features classic styling and a large sensor.

Appealing perhaps to those that value classically styled cameras (including yours truly), Fuji's latest cameras have raised a lot of eyebrows among those interested in going mirrorless.

The company's first offering, the X100 featured a fixed lens and really wowed many photographers. They praised it for its portability and enjoyed the ability to focus on the image making process without all of the features of a DSLR.

The image quality provided by the APS-C sensor was still fantastic, and even the electronic viewfinder was widely praised. However, the fixed lens sent some away because they felt the rather expensive X100 was a passing phase.

The follow-up, the X-Pro1, is a true system camera. With it, Fuji has introduced an entirely new mount known as the X-Mount. Although expensively priced at around $1700, the camera is drawing rave reviews from photographers who are praising it for the image quality and usability. Fuji currently offers three lenses: an 18mm f/2, a 35mm f/1.4, and a 60mm f/2.4 macro lens. These three primes are interesting choices for photographers looking to simplify.

Fuji seems to be blazing a trail that focuses on stylish rangefinder-esque cameras. Although they are producing rather high cost offerings, the fantastic image quality combined with the simplicity and portability of these cameras is attracting more and more photographers. 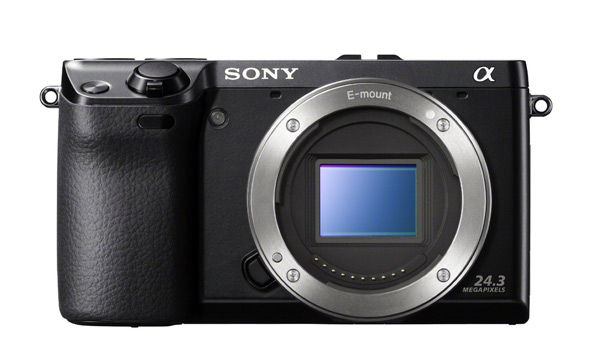 Forever committed to developing proprietary technologies and systems, Sony has their own mirrorless offering in the form of the Sony NEX series. These are frequently discussed and lauded as having some of the highest image quality, and the Sony NEX-7 offers 24 megapixels of resolution.

The downside to these is that they do feature a proprietary mount, so lenses from Olympus and Panasonic don't work with the cameras. The company has already introduced 5 NEX digital cameras, and even offers video cameras with the same E-mount lenses. Sony's cameras feature big APS-C sized sensors. 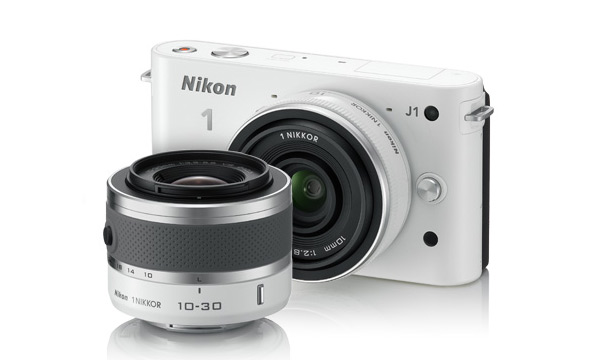 Having launched their own proprietary system, Nikon seems to be doing well with their mirrorless system, collectively known as "Nikon 1". Two cameras are currently offered, the J1 and V1. The premium priced V1 brings an electronic viewfinder to the table, while the more petite J1 includes a pop up flash. Many critics were unhappy initially with the size of the sensor, which is substantially smaller than the Micro 4/3 sensor.

However, the cameras were praised for having snappy autofocus and feeling very responsive. Users also seem to enjoy the minimalist style design, and Nikon appears committed to adding more lenses to the lineup with prototypes being shown off at trade shows and expositions. 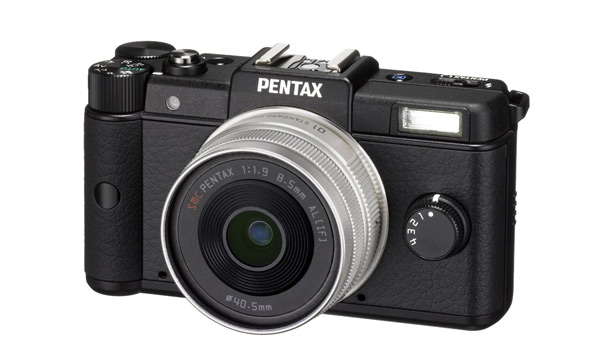 The tiny Pentax Q features interchangeable lenses and is the smallest of these cameras.

Perhaps the wildcard in the arena, Pentax currently offers one camera in the class. The pocket sized shooter known as "Q" is focused on being diminutive. Image quality is solid, but the camera features a tiny sized sensor that many believe disqualifies it from being compared to the above choices. Furthermore, it's difficult to tell if the Q will become a series offered by Pentax, or if investing in this camera will be a sinking investment.

What does the future hold for this class of cameras? It's hard to say, but my tendency to dream about fictitious cameras is in full force.

I think that the Fuji X-Pro1 may become the defining camera for the future of this system. With this camera, Fuji has now committed to a mount that they can use and grow with in the future. Smaller cameras such as these may never demand a full frame size sensor, so Fuji has probably hit the right size with an APS-C (or roughly DX equivalent size sensor) in the camera.

Personally, my belief is that these cameras will become widespread to the extent that they will pull photo takers from both directions: casual fans wanting something more powerful than a point-and-shoot, as well as professionals looking to travel lighter, such as myself. For some, these could replace their current cameras, while others would add them as an additional option.

I also believe that these cameras will grow in terms of what can be accomplished within the camera itself. Are editing features and sharing out of the question? Cameras such as these are likely to be refreshed and replaced by manufacturers more often than DSLR's, so experimental features don't seem out of the question. The big camera makers may use this form factor as a testing ground to find out what features consumers could be interested in purchasing.

Furthermore, I have to wonder about Canon's plans for their own mirrorless type camera. So far, they are perhaps the biggest player without a contribution to the field. I'm not sure if they have labeled this as a passing trend (remember when computer manufacturers scrambled to make netbooks? That market seemed to dry up quickly in favor of tablets and iPads) and aren't taking it seriously. This type of strategy leaves the company vulnerable to having to play "catch-up" in the future if demand continue.

Regardless, I'm excited to see what becomes of this class of cameras. I think that it really combines the best of all worlds, and a lower priced version of the X-Pro1 with a wide angle or 50mm equivalent lens would certainly be a camera I would buy.

How do you feel about this new class of cameras? Has one found its way into your bag, or are you holding off for a future model? Make sure and let us know your feelings about these cameras in the comments.