So you bought that vintage camera you've had your eye on. It's classic styling and juicy lens is more than you can handle. It doesn't have a light meter. So now you have a lug around your DSLR to meter with. Handheld meters can cost over $100. Lucky for you, if you have an iPhone 3GS or 4, you can get a meter for just a couple bucks or even free. Today, we're taking a look at five iPhone apps that allow you to have a lightmeter in your pocket.

Let me first say that most of the iPhone lightmeters are pretty accurate. You've probably noticed that most of the photos you take with your phone are exposed pretty well, so this shouldn't come as a surprise. It uses an evaluative system, so that means that it's harder to fool. Some of the features that these lightmeter apps offer make it even more accurate.

Pocket Light Meter is a free, very popular app produced by Nuwaste studios. In comparison to the rest of these apps, it's actually pretty basic, but even it offers some cool features. First, you can meter through the front camera or the back camera. This is handy for self portraits. I just can't imagine a situation that you'd need to meter a self portrait. But this app has five stars in the App Store, so maybe someone is using this function. Here are some of the settings that you can adjust in the settings of the app.

There are two really nice features that make this app worth the space in your phone's memory. One is the spot meter function. Just tap the screen where you want to expose and your done. The second feature is the hold function. You can meter something hit "HOLD" and it freezes the screen so you can move your phone and walk over to your camera without losing your settings.

Lastly, it offers a log function, which is neat but not that functional. Click the "LOG" button and it saves a jpeg of the image with the settings typed next to it. Additionally, the app also offers a "too dark" warning if your settings aren't allowing for proper exposure. Also keep in mind that like many free apps, this one has ads.

This seems like a relatively unknown app produced by Behnke Pettersson GbR. It has no ratings and is 99 cents. The thing that drew me to this app was the two "skins" that come with it. The first is called the "modern" mode. It looks very similar to all the other lightmeter apps. You can see the image and the settings are displayed on the side. The functionality of the interface is a little clunky, especially when you're working in extreme light conditions.

The other interface they've labeled "classic." It is super cool and looks just like an old school lightmeter complete with dials and a needle. You can rotate your thumb around the screen like you would on a classic iPod to adjust the ISO and aperture rings. Just tap the center to switch between the two rings. Then you can either move the yellow circle needle to match the white need or double tap the middle to make it happen automatically. Again, a bit clunky, but it works.

Here's another free app. This one has two stars in the App Store and comes from Clomputing.com. Unfortunately, I've had some trouble with this one. It seems to be a bit glitchy. But the last few times I've used it, it seems to work. There are also ads on this app. There is a slider and plus and minus buttons to control the interface. There is also a button to switch between controlling the aperture and the shutter speed. It also gives you the EV number which can be helpful, but other than that, it's not too impressive.

The Fancy Light Meter is appropriately named. It has a very unique feature: multi-spot averaging. You can tap up to three places on the image and it will average the exposure of those spots. It's like Ansel Adams and Steve Jobs has a baby! The aperture and f/stop can be tapped to change which one you're controlling.

This app is relatively expensive. It comes in at $2.99. It also only has two and half stars, which surprises me. Jai Yo studio doesn't stop there. You can also use a slider in the upper left corner to either shoot a photo every time you tap or just meter. This is the only app I've used that allow for real in-app shooting. It also has the best help screen of any app I've ever used. Hit the question mark and boom. Check it out if you get the app. And yes, feel free to leave comments about my dog. His name is Jack. 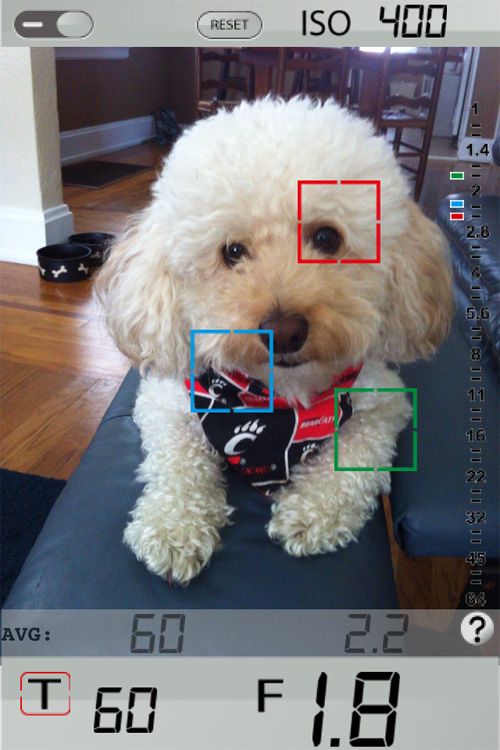 I saved the best for last, in my opinion. It's a five star app in my opinion, but it only has three and half in the App Store. This Kit Da Studio app costs 99 cents, . Editor's Note: this app works with both iPhones and iPads.

It is a steampunk, retro dream. It even has a "leather case" the slides off when you open the app! So let's break this down. First, there's a little window in the upper left corner that allows you to see what you're pointing at. Two big dials sit in the middle that allow you to control the ISO and aperture. At the bottom is elegant meter with a needle that displays your shutter speed.

There are three more functions in the app that improve it even more. First, it has a little exposure compensation wheel in the middle on the left, which I think is a little strange on any lightmeter, but what can you do.

Second, it has a "reflected" and "incidence" slider under the big dial. This switches the metering from the front camera to the back camera. I don't think the incidence meter works like a really incidence meter, but it does mean you can meter out of the front for those ever important self portraits.

The last cool function is a timer. You'll notice that the aperture ring goes all the way to f/1000, which is crazy. These high apertures are used in pinhole cameras. If your exposure is over one second, you can hit the timer button which sets up a stopwatch style timer for the proper exposure time. This is really nice for pinhole setups or even long exposure night images. 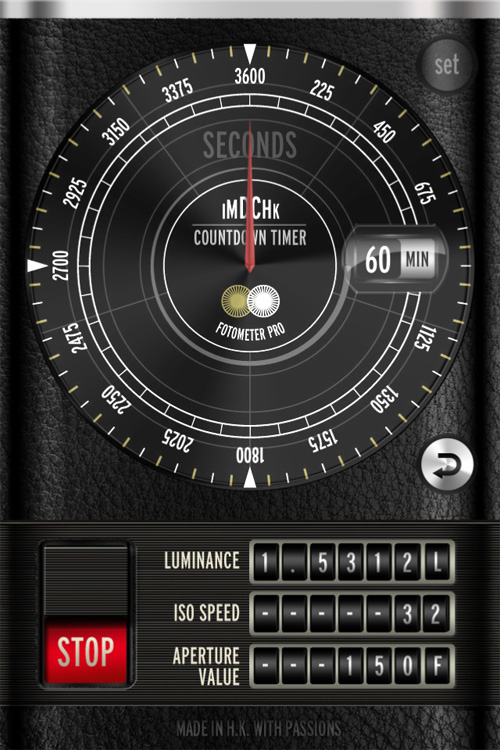 Overall, I was really impressed with these apps. Tell us what your favorite lightmeter app is below in the comments. And please share your Droid recommendations as well.