by Cameron Knight11 Jun 2011
Length:ShortLanguages:
ShootingSpeedlightsWide Angle Lens
This post is part of a series called Portraits.
15 Ways to Pump Up Your Portraits
50 Magnificent Male Portraits

Portraits in magazines or other publications are different than what you might want for purchase for a graduating senior or an engagement announcement. Typical portraits, like these, are keepsakes and are filled with smiling faces. The main subject, and often the only element is the photo, is the person. The best editorial portraits include something to show why the person is being recognized, especially if they aren't famous. Today, we'll be taking a quick look at what goes into editorial portraits.

When learning to take portraits, you'll hear over and over again that telephoto lenses are the way to go. They're flattering to the subject and can produce soft backgrounds. When shooting editorial portraits, wide angle lenses are often preferred for a couple reasons. First, they allow you to easily include background elements that add to the story of the picture. Second, they allow you to get closer to your subject which creates a sense of intimacy. This isn't to say telephoto portraits are never used for editorial portraits, but don't feel like telephoto is your only option. 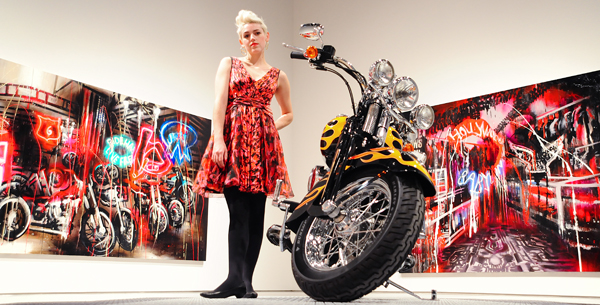 Rosson Crow is a Brooklyn-based artist. She standing in her exhibit, which was paired with custom painted motorcycles, at the Contemporary Art Center in Cincinnati, Ohio, U.S. I shot this photo from a low angle to line up the elements in the shot.

As with any portrait, expression is key. For editorial portraits, keep in mind that the expression may not be joy or happiness. Don't force your subject to smile. Have a conversation with them while keeping them framed in your camera. In between sentences or statements, their expression will reflect what they're talking about. If you're having them do a deliberate or tricky pose, like balancing on something, it may be necessary to prompt them and give them a count-down, but generally this isn't needed.

This tennis player I photographed has that competitive look in his eyes. Notice that in this image the addition content is not in the background, but in the foreground.

Including the environment in your photo allows you to add another layer of information. The background can tell us where a person works, what they do or even what happened to them. This might mean using a deep depth-of-field, which is also typically not recommended for regular portraits. The combination of a deep depth-of-field and a wide angle view can work great for editorial portraits. Also remember that "including the environment" doesn't always have to mean including the entire enviroment, often only part of it is necessary. 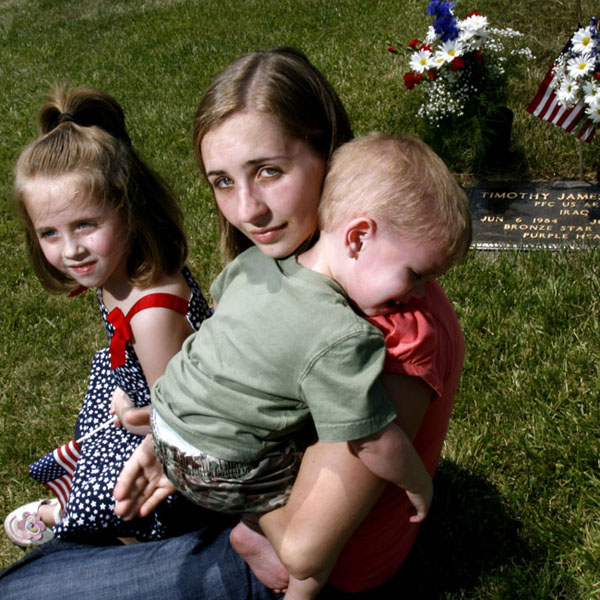 This mother of two agreed to be photographed at her husband's grave, who died serving in the Army in 2005. In this photo, she is posed, but her children became part of the enviroment. Even though it was bright outside, I still lit this portrait.

Just because you're shooting on-location doesn't mean you get to ignore lighting. Natural lighting can work, but it's a gamble. Maybe light only comes through a window in the afternoon, and you're there at 9 a.m. Having off-camera lights at your disposal is very important. It's a very rare to produce a good editorial portrait that doesn't have a well-lit face. Also practice balancing ambient light and the light from your flash by making your shutter speed slower. It's hard to include a background when it's pitch black.

This photograph was made in a dark diner. I lit the owner of the diner from the side with a flash in an umbrella. I used a long shutter speed to allow the lights of the diner to come through.

Making Do with Unrelated Backgrounds

Sometimes things don't work out. The artist you're photographing is having their studio fumigated. The runner has pulled a muscle. The person is studies medieval philosophy. Sometimes you just can't put your subject in an appropriate environment. There are two things that you must now do. First, it's time to think abstractly. The person is a doctor who treats depression; put them in front of a blue wall. Second, you need to make sure your other elements are perfect. The lighting and expression must be compelling enough to make up for the lack of an informative environment.

This is an organizer of a film festival. We met at a place which (obviously) wasn't a theater. I utilized a wall of glass block to, hopefully, create a subtle reference to the silver screen. She was lit with a single flash bounced off a wall to act as a fill light.

Keeping it Simple can be OK

We always strive for unique angles and interesting lighting. I encourage you to do this every time you shoot. But know when to back off. Know when to get off your knees, abandon three-light setup and just take a picture. Occasionally, we get lucky and find something that doesn't need any help from us to look compelling. Look for those moments and try not to get lost in technique. Some times we're so worried about our composition and shutter speeds, we forget to just look.

This is professor Herbert Shapiro, who taught at at the University of Cincinnati during the Vietnam War. He was also there when the school was shut down after the Kent State killings. He was once arrested along side his students during a peaceful protest.

Restaurant owner Aunt Flora had some great windows in her restaurant that I used to create this natural light portrait. 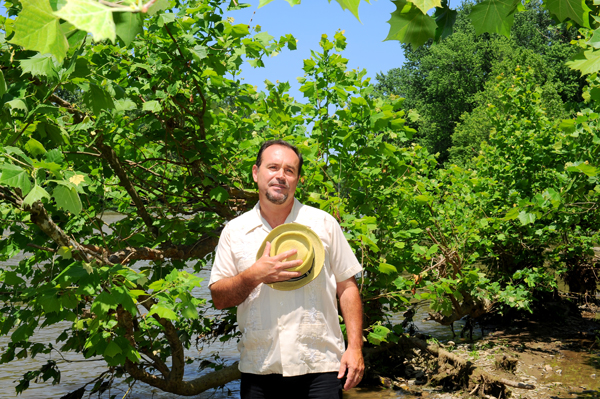 Bam Powell is a musician. We met in a park for his portrait: not exactly his natural environment of night clubs, but he was willing to perform an impromptu version of the Pledge of Allegiance yielding this photo.

This portrait is more about the environment than the person. He helped to redevelop this old structure into new condos and apartments.

This musical couple calls themselves Shiny and the Spoon. They recorded much of their first album in this tiny attic space. I consider this a portrait because they were prompted to go to this space, but the music vibe took over and they started playing. I didn't want to miss the moment.

Share you favorite tips and tricks for portraits below in the comments. Post links to your favorite editorial portraits, and show us some of your own!