The high dynamic range on the PowerShot G1X got me hooked. Now, I've played with the EOS 5D Mark III HDR, the first Canon EOS SLR camera to offer in-camera HDR shooting capabilities. And I've had a camera for the last two weeks, and I'm here to show you what this new feature can do.

When I recently reviewed the PowerShot G1X here, I mentioned the HDR mode, stating that the camera does HDR on its own and delivers images that look like good HDR examples and not the “art-garbage" some others are creating. I added that "I would like to be able to have more control on the HDR function, but those new to it will like the results."

Well either Canon was listening, or someone up at the headquarters had the same thought.

The HDR Mode, a first for a Canon EOS, has five different options to use: "natural" and others shown in this picture.

This function has been requested by Canon users. I guess it's the same in other brands too, so we will be seeing it coming down to more popular models. It's interesting, though, that Canon as introduced it at the higher end of the scale.

This is in no way a substitute to HDR software that can do a better job, but for those that want HDR in a "fast-food" style, the EOS does the trick, offering a menu with five choices: Natural, HDR Art Standard, HDR Art Vivid, HDR Art Bold and HDR Art Embossed.

While not all the styles work with all subjects, I did some test shots, shown here, that give you a general idea of the possibilities. The Embossed option if not for me, I am afraid, but some will probably like it. It cuts down saturation and enhances edge contrast.

The rest is very usable, depending on subject. The bold and vivid options enhance color saturation, the first popping colors a lot. The standard art mode has less color, but is more aggressive in terms of contrast.

While the natural mode is exactly that. And that's the one I like the most, because it lets you, with ease, shoot a HDR image to obtain the maximum detail in both light and dark areas, and see the result right in front of you instantly.

The user can control the type of HDR, the base exposure, and the variation between frames. The camera does the rest.

The new mode can be accessed by diving into the menus or using the new creative photo button on the EOS 5D Mark III (the paintbrush on the top left on the backside of the camera). This button also gives you the option to do multiple exposures, and many other things besides the type of HDR.

You can let the camera define the variation between exposures or choose one yourself (up to +3 EV). And you can just do a one shot HDR or, if you want to have a whole "HDR day" define that each shot in the camera will be done that way.

For each HDR the camera shoots three pictures in a sequence and then creates the final image. You can choose to discard or keep the three images taken to create the HDR: I advise you to keep them. It will give you the chance to use a HDR software to try your hand at it and see if you can do better than the camera. Or simply get another result. 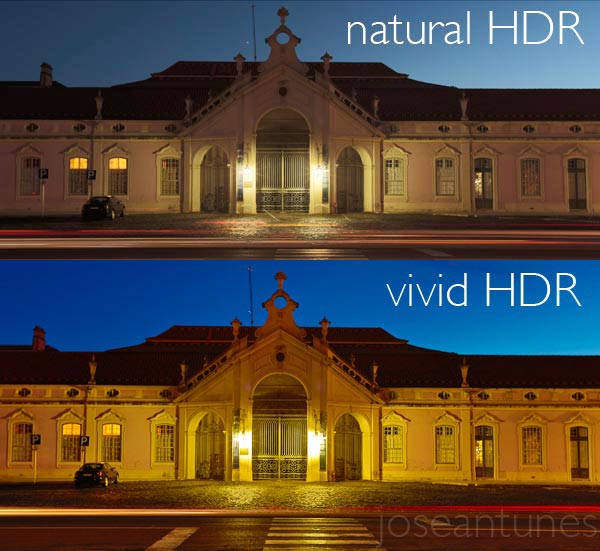 The natural mode will give you results not obtainable in a single frame. The "vivid HDR" goes one step further.

Also, remember that even if you use RAW the final image is always a JPEG (full resolution, obviously), as the camera has no way to create a RAW HDR. Imagine the options, in terms of tweaking, if it could be done. It's also important to remember that the camera does crop a bit of the original images, so leave some space around your subject, or you'll lose some information.

When you choose the HDR mode you enter into a kind of automatic process. It does not matter if you're shooting single-frame or continuous, the camera reverts to HDR mode, and will shoot three frames in fast sequence when you press the shutter.

How fast it shoots depends on the light conditions, so if you're shooting with low light conditions get a tripod. I've done some 30 second long HDR exposures these last few days.

Remember, though, that if subjects move within the frame, you will have problems when the bracketed shots are assembled. Shooting at a fast fps rate will be the best choice many times. That also means that you can shoot hand-holding the camera, as long as you hold it steady so it does not move between shots. Canon's Auto Image Align works nicely but cannot correct badly aligned images.

HDR is great for night photography. In this image, taken on the 5th of May 2012, you can see the perigee moon appearing over the roof.

The HDR Mode cannot be used with flash, multi-exposure, Bulb or the bracketing modes (exposure or white balance). Also, being a process that depends much on the content, it can have variable results under different and mixed light conditions, vast areas of the same tone (I got banding in the sky in some pictures, for no apparent reason) and even show strange colors when shooting under fluorescent lights.

The implementation of the HDR Mode in the EOS 5D Mark III heralds the start of a new era in terms of HDR use by Canon users. I've no doubt that the option will be available in models for amateur use in the next generation of EOS DSLRs. It will open new horizons for many people, and let them photograph more under different light conditions. and in the process learn some more about photograph.