Quick Tip: Kill Reflections and Enhance Colors with a Polarizer

We mostly think of using polarizing filters to get saturated skies, but in fact they also work in the deep forest, to add pop to your pictures by eliminating reflections and enhancing colors.

The image shows the results from using a polarizer on your photography.

Polarizers do, in fact, remove reflections from non-metallic surfaces. The other truth about them is that they work best at an angle of 90 degrees to the sun, and that they are not the best choice if you're using an extreme wide-angle lens (something wider than 28mm will cause problems): the effect will be uneven and you'll probably not like it. Also polarizers can give you skies more blue than you want. Beware! 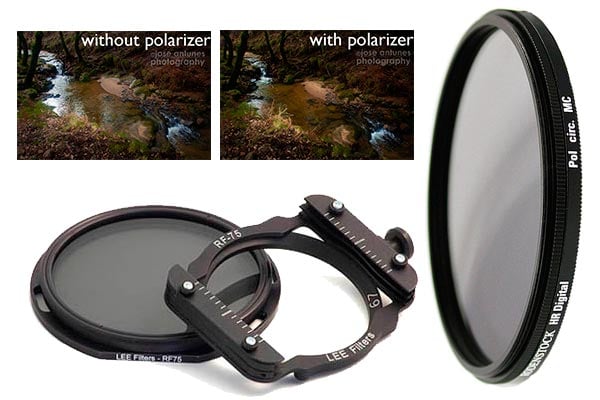 There are different mounting types of polarizers in the market, from various brands.

I do not use polarizers much, at least not to shoot the sky. But I do like their effect in small creeks in the shade of the forest, not so much for the capacity they have to simply kill all or most of the reflections because sometimes reflections are what I am after, but because they also help to saturate colors. And that means that I've two creative options instead of one. Having choices is always good.

I recently had a regular participant in my photo tours asking me if he should buy a polarizer filter. I told him that if he could spend the money he should buy one, even if he would not be using it all the time.

Not all Round Polarizers are Circular 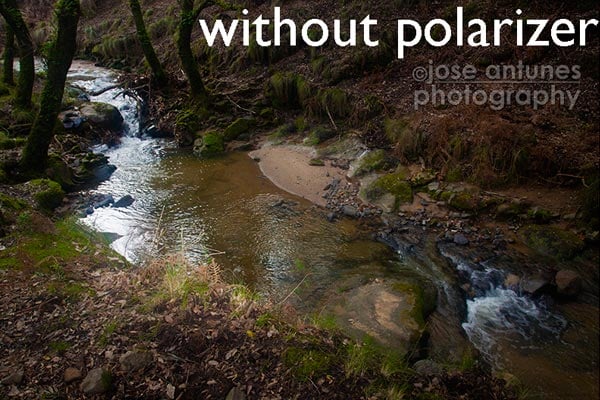 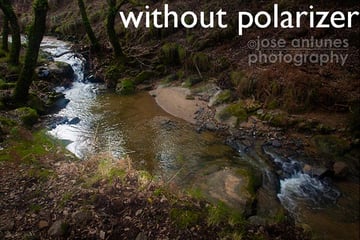 Without the effect of a polarizer filter the reflections on the stream do not let you see the detail.

Some of the filters we used in film days can be recreated in the computer so there's no need to carry a lot of filters with you. But there's no way to recreate what a polarizer does, so if you like, want or need the effect, you have to buy the filter.

Before we go ahead, let's satisfy the curiosity of the scientific readers. A polarizer is an optical filter that allows light of a specific polarization to pass through and blocks waves of other polarizations. The common types of polarizers are linear polarizers and circular polarizers.

This is as far as I will go in terms of explaining polarizers. A circular polarizer is not named that because it is a round filter, but because it belongs to a type of polarizer that goes well with autofocus systems and modern cameras. The linear polarizers were mainly used in film days with manual focus cameras. So, let me rephrase that: even if you have an old round polarizer filter inherited from your father, it might not be a circular polarizer. 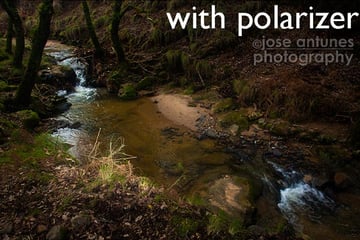 While turning the filter you see that reflections vanish and more detail on the stream bed is shown, while the colors become deeper.

So if you're using a modern DSLR (and some old SLRs, in fact), you'll want a circular polarizer. This said, you can get them from different brands, like Lee or Cokin, associated with an adapter that will let you use the same filter on a variety of lenses.

If you're lucky, you'll have lenses with the same diameter - 77mm in my case - so I just bought one screw-on polarizer (if possible go for the slim version, to prevent vignetting on ultra-wide angle lenses) that I move from lens to lens. If you still want to use a screw-on filter, you should get the bigger diameter you need and then buy adapter rings for the smaller lenses. It works!

When using a polarizer filter you need to decide which reflections are to stay and which are to go. Compare this image with the one just below.

Now that all is explained, let me say that I have spent the last days scouting some locations for water photography, so I decided to take some pictures that show what a polarizer can do for you in nature photography.

The main reason to use it is simple: it enhances colors, and they become rich and very saturated. In fact, cutting the reflection coming of foliage around the stream and also reflections on water will remarkably improve your landscape photography. And as I said before, you can not do this with Photoshop or any other editor you use in your computer. 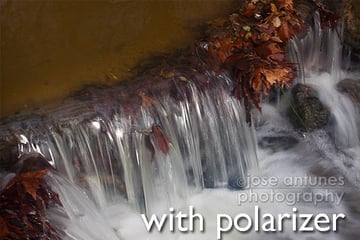 Too much polarizer can destroy all the detail. The image above is more interesting because it retains the reflection of the trees on the water surface.

As with everything else in photography, you need to decide where to stop so the effect is not killing what is interesting in each picture. The polarizing effect is obtained rotating the filter. You'll see the reflections vanishing and the image getting darker in the viewfinder of your DSLR, a sign that there is a light loss.

In fact, it goes to about 2 stops at maximum effect, sometimes you need a tripod to get your shot. Polarizer filters are, after all, also working as neutral density filters, something to remember when, in other occasions, you need to cut the light that reaches the sensor or film. But that's another story altogether. For now remember that your nature photography will be richer if you spend money to buy a good polarizer filter.