If a RAW is so much better than a JPEG, than it must have more megapixels, right? The question from a student at my workshops deserves an answer. I hope this article explains the problem.

There's so much confusion about JPEG and RAW that it can be hard to explain what it is all about. It's not just amateurs, even professionals are not sure when a discussion about the advantages of one and the other arises.

I would say that it's always better to use JPEG than to use poorly created RAW files. That's my way to say that if you don't understand what it is all about, you should use JPEGs and live happily the rest of your life.

In fact, the JPEG format is so good that different types of files, from the JPEG 2000 (from 12 years ago) to Microsoft HD Photo that was going to be the new kid on the block in 2007, tried to take its place and they never did. JPEGs are good enough, so no one is going to take them away in the foreseeable future. And they are getting better every day, as the processing in cameras and software evolves. 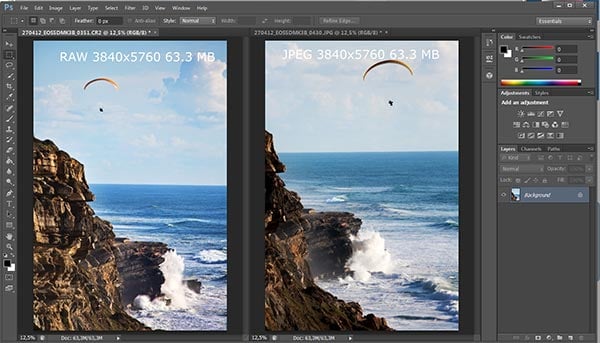 Although different, both files have the same dimensions when opened in Photoshop

It's easier to edit RAW files today than it was when I first started taking pictures with digital cameras. No one was sure, in that period, if in two years time the RAW files from each camera maker could be opened.

See what happened to the Kodak Photo-CD (PCD) format from the '90s. Photoshop dropped it all together and so did Kodak. So, even if camera makers had their software to open RAW, everybody was saving JPEGs, and TIFF or PSD, to make their archives safer.

Today, it doesn't matter if you're doing JPEGs or RAW. You can use one or the other, depending on what your needs are, the time you have to process files, and how much you intend to post-process your images.

It's only when you have answers to those aspects that you can define how to shoot. It should never be something done because your friends do it or because you want to look like a professional. Professionals use the best tools according to the moment. Or things as simple as the space left in their memory card.

The question of space in memory cards is what sparks this debate. We all hear that RAW images are bigger than JPEGs, but that bigger is in terms of the space they fill in the card or on your hard drive. RAW is not a compressed format, so it does need more room than a JPEG, which can be compressed. And that's the difference. 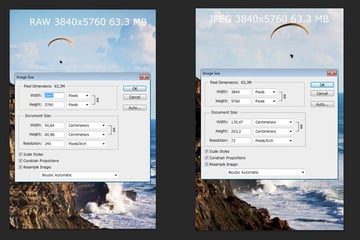 The image size window confirms that there is no difference between a RAW and a JPEG when it comes to their weight in MB.

Forget, for now, the other reasons why RAWs and JPEGs are different, and imagine your camera creates files with 3000x2000. It doesn't matter if they're RAW or JPEG, they've the same dimensions. So, they will have to, when opened, have the same weight in megapixels. The difference is that the JPEGs can be compressed, so they take less space than a RAW, depending on the detail of each image taken.

For a practical example let's look at some images I took recently. Because I did not have much space left on a 16GB card I had on a Canon EOS 5D Mark III camera I was using, I choose to use JPEGs for some images, after having shot RAW for the first pictures. The images are different, but are from the same session and I tried to use about the same framing, and situation, so we've similar files.

Now, although they both have the same size in pixels (3840x5760) the RAW file uses 26.6MB space when on the memory card, while the JPEG uses only 5.12MB. This means that I can place almost 5 JPEGs in the space a RAW occupies.

To put it simply, RAW gives you more control. When you shoot a JPEG, you're letting your camera apply a white balance, sharpening, color saturation and contrast to your image. These filters, let's call them, are not editable layers on top of a file, they are a permanent part of the file.

When you shoot RAW, you're choosing how each of these filters is applied and you're applying them with a program that is (in theory) more powerful and "smart" than the program your camera uses.

When working with JPEG, you can also experience compression loss. Opening, editing and recompressing JPEG files creates errors in the file. Back in the late '90s, if you opened and resaved a JPEG ten times, you'd start to notice gradients pulling apart and digital noise being introduced. These days, JPEG compression is much, much smarter, and this problem has for the vast majority of us been fixed. But it still remains a fact, that compressing, decompressing and recompressing files does cause data loss.

The important thing to remember these days is that if you shoot a picture in a JPEG format that needs little or no editing, your final results will be just as good as if you had made the image in a RAW format.