Shooting fireworks is easy once you support your camera well. That's one of a few tips that will make your firework shots a lot better. Try these tips during New Year's fireworks, and free yourself from "auto" modes. 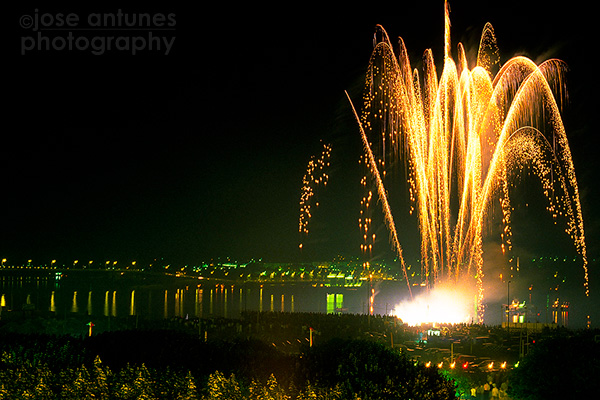 Choose a good vantage point that lets you integrate the fireworks in the surroundings for some of your pictures.

Photographing fireworks is easy if you've a compact camera with lots of options and a tripod: place the camera on the tripod, choose the option called Fireworks and shoot. Yes, that's it.

You'll probably discover, if you look at the info on the LCD, that the camera sets everything for you: probably a two second exposure, f/5.7 aperture or close to it and ISO 100, with a medium focal length. That's what my compact camera says, and keeps saying even if I point it at light or dark subjects. This is the automatic mode, "shoot and we do the rest" that today's auto-everything cameras offer.

If you're shooting fireworks this way, well, there's nothing more I can tell you. But if you want to take control, then even with a compact camera that gives you some form of control - like aperture priority or, what is better, a manual mode - you can enter the realm of "I did it all by myself" and come out with a picture that will be yours and not the act of the camera's brain. It's a good way to start the New Year: taking control of your photography. 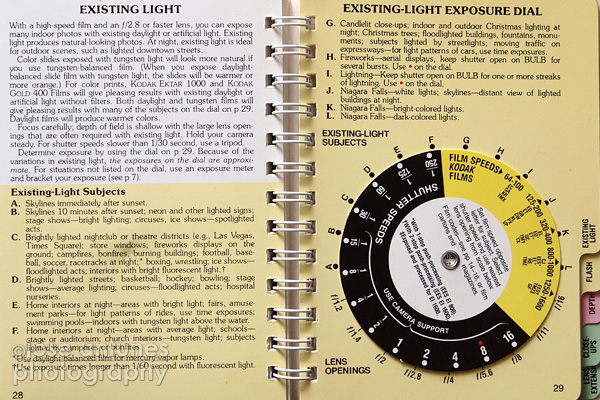 Photographers in the film days would carry books like the Kodak Pocket PhotoGuide with tables and dial calculators to choose the starting exposure for different situations.

As I said before, it is easy to shoot fireworks. And it does not matter if you have a simple compact camera with a manual mode or the best DSLR money can buy. It's always about letting enough light reach the film or sensor.

You might be tempted to think you just need to use a high ISO and you'll get your shot - and yes you can, but it will not be the same. A tripod will be your best friend for this type of photography. If you're using a compact, the tripod will be just about it, as you may have no way to shoot without pressing the shutter button on the camera. Then you might have a problem with the movement resulting from pressing the button. Beware of it.

If you're using a DSLR, then you should get a cable release letting you shoot without touching the camera. But I prefer a radio trigger, as it really lets you control the shooting without touching the camera. I've seen people using a cable release keeping holding the cable, and sometimes playing with it, during a long exposure time. Even a dangling cable can create vibration and spoil a picture.

Try to include in the image elements connected to the firework show, like people watching, as in this photograph.

Some people will think they can use the timer on their cameras to capture fireworks. They can, but I wish them luck. Because they will miss most shots as it is humanly impossible to coordinate the 2-10 second wait time with the moment the lights start to fill the sky. So you really need a way to shoot when things happen.

Before digital cameras, photographers could not immediately see their pictures, so they relied on written info, as those published in low light exposure guides offered by some magazines.

There is no right exposure for fireworks. It depends on a lot of things, from the ambient light to the quantity of fireworks in the sky at a specific moment, what you want to capture and some other variables. Back in film days you could get some tables showing you suggested exposure times, that would go from 1/30 to various seconds, and people would trust them and try different exposures, only to see the results after developing the film. Now you can take a few pictures and see the results immediately, in order to adjust your exposure.

Use a low ISO, set your aperture around f/8 or even smaller, so you have some depth of field, and expect to have exposures up to some 10 seconds if you want to get multiple bursts and trails in the same frame. You can also use Bulb as the time setting and use a black card in front of the lens between bursts so you get less trails. Remember, though, that sometimes less is better. This said, there is no specific rule, and shooting fireworks is a mix of luck, creativity and adaptability to what you're faced with. 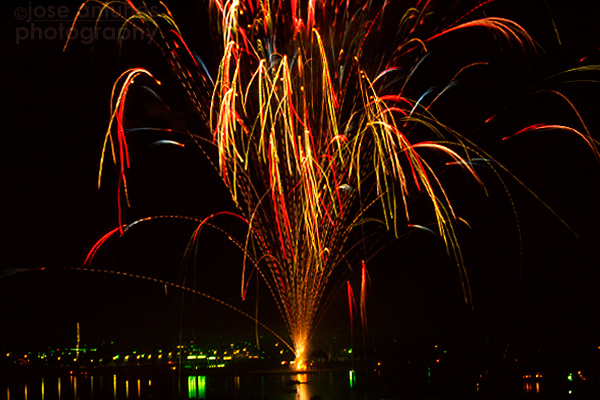 Depending on the exposure time you'll get more or less bursts and trails of fireworks in your image.

Shootings bursts in the sky is great and will offer you some artistic images, but remember to use some elements that will contextualize the photo. A monument, people watching, or reflection can all be important elements that will give more meaning to your firework photos.

In order to obtain the best results, scout the location during daylight, so you can understand what your options are. Choose a good spot, make sure you will have a chance to place a tripod there and not have a lot of people tripping on it. Define which points you can use to focus and if they will be available when the fireworks starts. Mark eventual changes in framing and try to visualize what each will offer you.

When shooting, focus automatically or manually if you can not do it otherwise, and deactivate AF, so the lens is kept all the time at the same distance. Define the base exposure once the show starts and keep shooting.

Festivities in some parts of the world are an excuse to use fireworks. The photo shows a man launching a rocket firework from the churchyard of a Portuguese temple, in the Northern province of Minho, in Portugal.

People will mostly associate fireworks with night time, but they're also used during the day, to celebrate events, then not essentially for the visual aspect but for the noise they make. So, you can also get interesting day shots of fireworks, as the image above, captured in the north of Portugal shows. A man on a churchyard launches a small rocket firework that will explode in multiple bursts and much noise, to announce festivities. Look for this side of any fireworks shooting projects you get involved with.