It wasn't too long ago that my camera was sitting unused for weeks at a time. I had finally built the kit that I wanted, full of fast glass and great cameras. However, I wasn't making photos on my own time because of the constant need for more gear. Today, I want to share why I became such a big believer in the "less is more" creative mindset.

The problem begins when we enter into a mindset of "if I just had." We begin to fool ourselves that the next piece of gear will catapult us into the lap of performance. If I had that telephoto lens, I would go shoot wildlife and sports. With that fast prime lens, I could capture award winning portraits. With the ultra wide angle lens, my landscapes would shine.

I kept delaying making the photos. It sounds awfully elementary, but the best advice was from a musician friend that said, "if you want to make photographs, you have to carry the camera." I wanted to make great photographs, but I found myself leaving day after day without the camera in my bag. 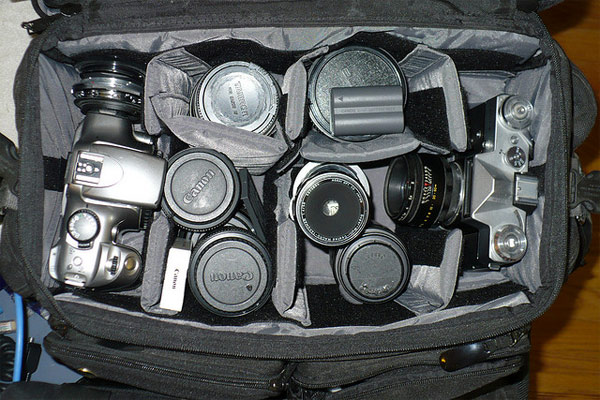 I built a bag full of good lenses and cameras like this one, but found that it was too much to realistically carry. Photo by Flickr user aperture_lag.

I'm incredibly lucky to own the gear that I own. I've had good enough fortune to earn the opportunity to buy the gear to help me do my job better. Fast primes like my Canon 35L and 135L are pivotal to producing my work. When I'm on the job, I wouldn't dream of leaving home without these big lenses.

The problem wasn't in my professional work. My business continued to grow and prosper. But I was left with the feeling of not shooting what I wanted to shoot on my own time. Walking out the door with the camera sitting on my desk was happening far too often to get the images I wanted.

For me, the cure was to limit myself. Self-control is not always my strongest quality, so I had to limit myself from the get-go. If I didn't make a tool available to myself, then I couldn't use it. More importantly, I didn't have to think about choosing it.

My entire philosophy for the remedy is to eliminate the decisions involved, and focus on making images. I needed to travel lighter, and thus encourage myself to carry the camera more often. Here are some of the things that I tried to help me overcome the creative logjam.

Everything old is new again! Film cameras are at the heart of "less is more." With a limited number of frames on the roll, we're challenged to maximize each one. With no LCD screen to review our exposure, we get stretched.

Even more fun is the versatility of film. Each type of film brings with it a unique personality that just can't be replicated in the digital era.

I think my friends thought I was crazy when I eschewed my Canon SLR for a plastic toy camera on a recent trip that we took. Traveling with an expensive DSLR and leaving it in hotel rooms or hot cars is something that I would never do, but an inexpensive toy camera is practically disposable.

Keeping this in mind, it's easy to realize that I made images that never would have existed otherwise. The choice wasn't between an SLR or my toy camera, but instead between making images and not making images. 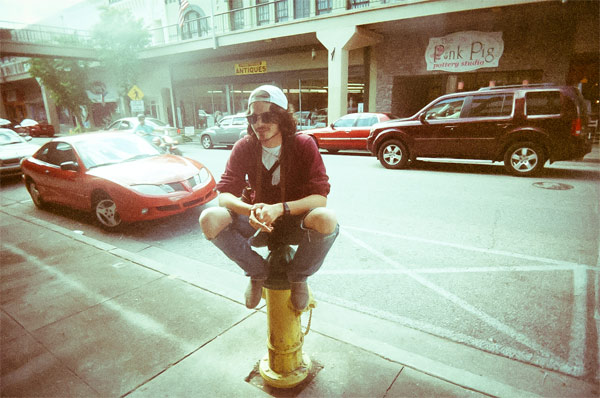 This photo was made with the Slim Angel toy camera, an inexpensive plastic camera with a super wide angle lens. Photo by Forrest Lane.

I purchased this small white camera called the "Slim Angel" for a recent getaway. It's got a really wide angle lens and can only be used in sunlight, but delivers fun results and is a great change up when you get stuck creatively.

Another classic challenge is sticking with one lens attached to the camera. Before the era of fancy zooms or tons of focal lengths, photographers such as Henri Cartier-Bresson made an entire life's worth of work with a 50mm lens alone. (OK, primarily that lens.) 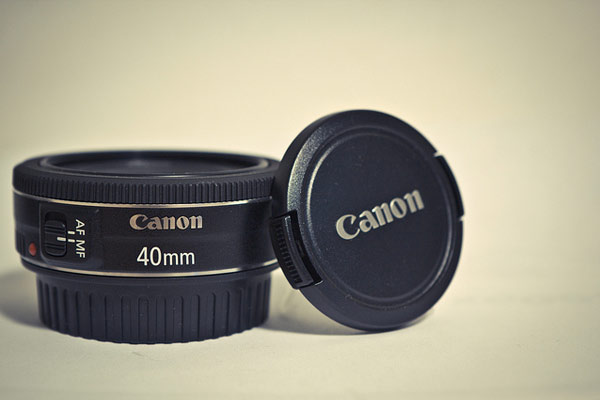 An ideal lens for a "one lens challenge" is a pancake style lens that's flat and easy to carry. This is Canon's new 40mm pancake. Photo by Flickr user joo0ey

A lot of photographers have probably tried just shooting a 50mm or kit lens, but how about something more unique? What if you tried out shooting an outing with only a telephoto, or only a macro lens? These are a different way of approaching the one lens mindset, and still fit within the "less is more" framework.

In short, I think that self-limitations are the best way to push our creativity and force us to create. The fewer choices that we have to make, the more that we can focus on creating the product. When it comes to photography, I think that our gear is simultaneously our best friend and our worst enemy. We need tools to create images, but when they get in the way of making images, we should practice the art of less.

How do you break out of the creative slump? Do you find yourself leaving your "big cameras" at home? Check in with a comment to let me know what you think.