We're kicking off a new series of hardware reviews on Phototuts+, starting today with an in-depth look at the Ricoh GXR, a fascinating compact camera with a unique concept - rather than just changing lenses, you change the entire camera unit!

It's every photographer's dream - a compact digital camera which offers the image quality and the controls of a digital SLR. Ordinary compacts are no good because the sensors are too small to deliver decent quality, they don't accept interchangeable lenses, and they're designed for a market where idiot-proof automation is more important than creative control. And yet SLRs are too big and bulky for casual, candid photography.

The makers are keen to exploit this big, new market. Olympus and Panasonic were the first with their Micro Four Thirds hybrids, Samsung was next with the NX10, and Sony has announced the development of its own series of interchangeable lens compacts.

But Ricoh has taken a completely different approach, disregarding conventional notions of cameras and lenses as separate to produce the GXR, a compact where you don't just change lenses, but entire camera units consisting of a lens and a sensor combined.

In effect, the body is just the 'shell' containing the controls, power and viewing system, and it's the camera units which produce the images.

It sounds like a crazy idea. It's bad enough paying hundreds of dollars for lenses, but if each one has a sensor and processor too, it's going to push the cost up even higher. Surely it's far more efficient to put the sensor in the body in the normal way?

Cleverer Than It Looks

Not necessarily. Ricoh's system might appear grossly inefficient, but it has some interesting advantages. Ricoh claims, for example, that by pairing lenses with sensors it's possible to produce much better image quality. For example, the low pass filter placed in front of the sensor to colour artefacts can be made to match the characteristics of each lens precisely. And because the camera units are sealed, you won't get any of the dust problems that plague the exposed sensors in other interchangeable-lens cameras. The designers don't have to work with fixed lens flange to sensor distances, either, so there's no need for complicated 'retrofocus' lens designs or other optical compromises.

The point is that although the GXR concept might seem inefficient and expensive, there is some very sound and clever thinking behind it.

There are some complications and compromises, though, because the GXR's camera units use two different sensor sizes... 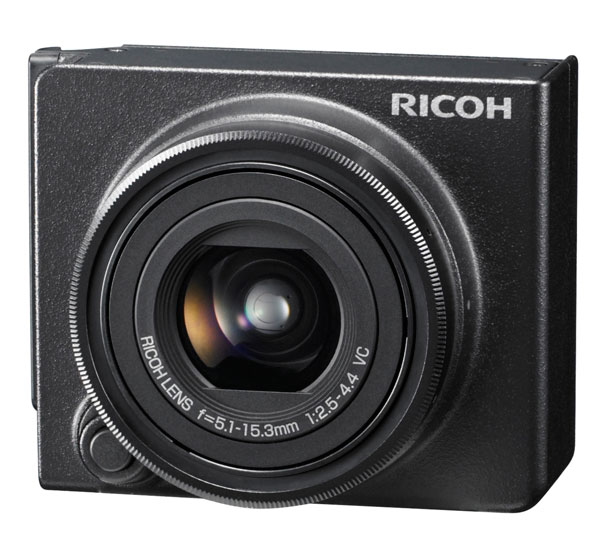 There are two camera units available right now, and the most popular is likely to be the S10 24-72mm, which offers a 3x zoom range. The problem with this one is that it doesn't use an APS-C sensor. Ricoh's used a much smaller 1/1.7-inch sensor in order (presumably) to keep down the size of the camera unit. The result is that the GXR/24-72mm combination starts to look like little more than a very expensive compact. Indeed, there are few practical differences between this and Ricoh's own GX200, right down to the sensor and lens specs.

However, the A12 50mm f2.5 Macro unit is very different. This uses a much bigger APS-C sensor, and it competes with other hybrid cameras and digital SLRs on level terms.

So the GXR remains at a disadvantage relative to other large-sensor compact cameras, because much of the time you're not getting a large sensor at all. It's another unwelcome compromise in a camera system which is already out on a limb with its unique modular camera unit design.

The mix-up of sensor sizes means that Ricoh has had to find a way to keep the focal lengths intelligible. It's done this simply by quoting the equivalent focal lengths rather than the actual ones. This isn't technically very correct, and it does disguise the smaller sensor size in the zoom lens unit, but it does at least help users plan their systems clearly and simply.

But the GXR has much more going for it than its specification alone might suggest. It is an exceptionally well made and well-designed camera, with a build quality and a finish which sets it apart from almost every other compact or hybrid camera. The specifications alone are only part of a camera's appeal - what they're like to handle and to use is every bit as important, and Ricoh has got the GXR absolutely right.

This might be a surprise to those who don't know the brand particularly well. It's true that Ricoh is not one of the big players, but it's been in the photo business a long time, and has produced some very good cameras, including the legendary GR1 film compact, which was adopted by many professional photographers as a go-anywhere pocket camera. The legacy of the GR1 lives on in Ricoh GRD-series digital compacts, models like the GX100 and GX200, and now the GXR.

The body is made of magnesium alloy and finished with a durable black finish which is easy to grip. There's a control dial on the top, a very firm mode dial with a locking button to prevent it from being turned accidentally, a large shutter release button and a simple sliding power on/off switch. 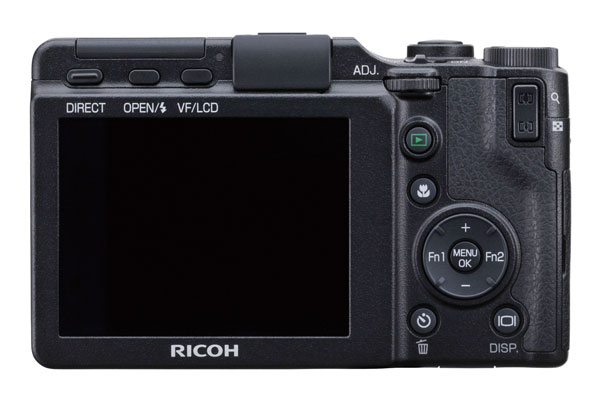 On the back is a second control 'lever', a zoom rocker switch, four-way navigational buttons which act as short-cuts for various camera functions, and macro, playback, self-timer and display mode buttons. Three more buttons at the top left take care of the flash and EVF/LCD options. This isn't a big camera, and you get a lot of hands-on external controls, but it doesn't feel at all cluttered.

The 3-inch LCD display deserves a special mention. It has the same 920,000-pixel resolution as top-quality digital SLRs, and its clarity and sharpness is quite exceptional. It needs to be when you're using the menus, though, because the text is quite small. Ricoh's gone for a very plain, businesslike menu design which is quite refreshing, but also presents a lot of information in quite a small space.

You may not need to use the menus that often, though, because the GXR's external controls are endlessly configurable. You can choose the settings assigned to the adjustment lever on the back, for example. When you press it in, a series of drop-down menus are displayed at the top of the screen, and you then turn the lever to select the menu you want.

You can also choose the settings applied to the two function buttons on the back (the left/right navigational buttons). Within a few minutes you can have the GXR working just how you want it to, and if you'd rather work with an on-screen interface rather than buttons and dials, you can do that too, using the Direct button on the back of the camera.

There's no viewfinder built into the body, but you can clip an external electronic viewfinder to the accessory shoe. This could be useful in bright daylight where the main LCD is hard to see, and some GXR kits include the EVF as standard. 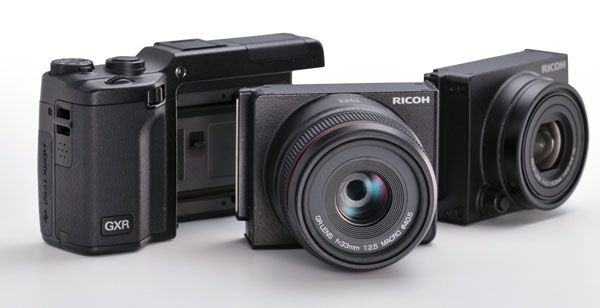 The camera units themselves slide sideways on to the front of the camera and are snapped securely into place by a sprung catch. To release them, you push a switch on the front of the body and slide them out again. Changing camera units is, if anything, a little quicker and easier than changing lenses on a regular camera, and what's really impressive is that once they're in place the GXR feels like any other compact. The shape is the same, the handling is the same, and the fitting is so tight and secure there's never any hint that it's made up of two parts.

The 24-70mm unit's zoom action is motorised rather than manual, as is the focussing. The focus options are very impressive, though. The autofocus is fast and flexible, but there's a manual focus mode too and a snap focus mode where pressing the shutter release quickly in a single movement sets the lens to a preset distance and eliminates any shutter lag.

You can choose this distance to suit the type of subject or the camera unit you're using, and it's especially useful for the shoot-from-the-hip shots like this one, where you just don't have time to mess with focussing.

This unit also has an excellent 1cm macro mode which might make you wonder whether you need the 50mm macro camera unit at all.

You do, as it happens, and for a number of reasons. First, there's the effect the much larger sensor size has on image quality. Second, the extra focal length means you can move a little further back from your subject. Third, you get a precise manual focus ring - and precise focussing is particularly important for macro shots. It's rather useful here for another reason - the 50mm unit's autofocus is distinctly slow and hesitant at very close focussing distances and can often fail to focus at all if the subject lacks contrast or clearly-defined edges.

The GXR's price and build quality mean that users will have high expectations for the picture quality, and they're unlikely to be disappointed.

There's a limit to what the 24-72mm camera unit can achieve, because it has a smaller sensor, but it's pretty impressive nonetheless. In-camera processing means that there's no distortion and not much chromatic aberration, and the lens itself shows excellent edge-to-edge sharpness. At low ISOs, the pictures aren't that far behind a D-SLR's for clarity, definition, saturation and contrast, which is no mean achievement - the 24-70mm's optical quality offsets the smaller sensor size.

At higher ISOs, though, it starts to suffer. This camera unit goes right up to ISO 3200, but the quality is tailing off long before then, and you'd probably want to think twice before going past ISO 400.

The 50mm macro unit's performance is very, very good. As you might expect from a specialised fixed focal length lens, it's almost completely free of aberrations, but the exceptional clarity, saturation and contrast of its results is still quite a surprise. It's right up there with the best APS-C SLRs and macro lenses for picture quality, with great edge-to-edge sharpness too and terrific resolution even at maximum aperture.

This is where the GXR system shows what it can do. Hybrid interchangeable lens cameras like the Micro Four Thirds models from Olympus and Panasonic, and Samsung's NX10 still feel like scaled-down SLRs but in this configuration the GXR really is a compact camera with an APS-C sized sensor.

These seem to be conforming to the pattern of the first two camera units, though: only the prime lens units have an APS-C sized sensor, while the zoom units have a smaller one. It keeps the size of the lens units down and, presumably, the cost, but it's a compromise that could hurt the GXR's chances of competing head-on with other hybrid cameras.

What the GXR needs, then, is users who are more concerned with handling, design, compactness and practical usability rather than chasing optimum image quality at all cost - and the GXR is an extremely practical camera.

The Ricoh GXR is expensive, it's odd and it has a number of design compromises that purists won't like. But as a practical, portable camera system for real photo enthusiasts and professionals, it turns out to be very good indeed.