Shooting outside at night is no easy task if you don't enjoy the unprofessional and merciless glare of a built-in flash. Today we'll shed some light on the subject and discuss how you should approach venturing into the darkness with your camera loaded and ready to take on the world. We'll focus on four different styles that you can use as a springboard for your creativity!

Hunting Light in the Dark

In a sense, photography is the art of capturing light. Your camera is not only a digital image creation tool but more importantly an advanced light collection device. If you think of photography in this way, shooting at night sounds down right crazy.

To shoot photos at night means to wander out into the dark to capture light. Obviously, the task will not be an easy one. Human eyes are extremely advanced optical equipment that automatically adjust to different lighting conditions. A DSLR, though quite advanced, is simply no match for this natural brand of technology. What this means on a practical level is that capturing what you see can be very difficult, especially at night.

What it takes to pull off great night shoots is the right equipment, a lot of know how, some patience, a bit of trial and error and even a little luck. Below we'll take a look at a few distinct kinds of photographs taken at night and discuss how to capture them.

The first type of shot we'll discuss is one of the easiest. Landscapes at night can be incredibly beautiful and are used to convey a number of different moods and personalities. A oceanside beach horizon feels exotic and inviting, a desert shoot feels desolate and lonely and the mountains feel peaceful and majestic. 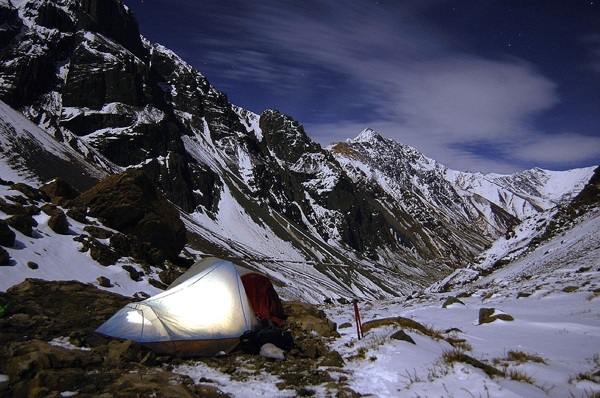 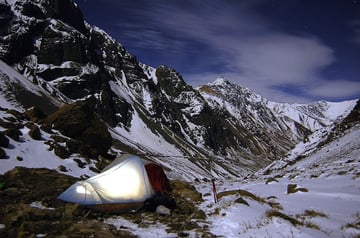 To capture a shot like the one above you don't need much in the way of special equipment. Just pack your tripod, a camera and some warm clothes and you're ready to go.

There aren't a lot of city lights to get blown out (just the tent light), there aren't any people or animals to get all blurry, there's just the steadfast Earth and a brief peek at the sky. The task here then becomes to simply set your camera up and let it go about its business of collecting photons while you freeze your fingers off pacing back and forth as the snow crunches quietly under your feet. You see the fog of your breath, the faint glow of distant stars and the patches of green rebelliously poking through the snowy canopy. Your silent and ever gazing cyclops companion sees only light.

The photographer above set his aperture to f/3.4 and his exposure to a whopping 30 seconds. If you've never taken a photo for thirty seconds, that's a really long time. Count down thirty seconds in your head and imagine your shutter was open that entire time. This is what it takes to shoot a land that's far removed from the harsh lights of developed civilization.

Notice that the clouds did indeed move during this time, as floating objects are wont to do. The result however isn't anything distracting or ugly, but a nice subtle motion blur that makes the heavens seem that much more vast.

You'll find that the longer exposure makes you feel like more work was put into these shots. When you finally hit your stride and start taking great night landscape shots, expect a surge of pride upon viewing the results.

A close cousin to the deserted landscape shot, the city shot requires a bit more cunning and methodology. The blessing and the curse here is the availability of light.

On one hand, the more light that is available, the easier time your camera will have of gathering everything it needs to make a decent image. However, the light is often deceptive as it may seem quite bright to your eyes but will still result in a pure black image without a sufficient exposure.

You really have to be on guard though as you crank that exposure because there will be a great disparity between the points of light and the rest of the photo. It's far too easy to blow out certain portions while others remain dark, or simply cause the entire image to be engulfed in a massive flare.

The image above was shot at f/22 with a 15 second exposure and an ISO of 320. Notice how much narrower the aperture is here than in the previous shot. This photographer is letting in less light all around and yet still comes up with a remarkably bright image. To be an effective evening photographer, you'll definitely have to learn to evaluate your surroundings and translate the available lighting conditions into appropriate camera settings.

When shooting images like the one above, take your time and experiment with as many different exposure settings as it takes to start getting the result you want. If possible, dedicate an hour or more to the task and don't be surprised if it takes you that long to get something noteworthy.

The dark alley shot utilizes a beautiful shallow depth of field (a wide aperture), a fairly immobile subject and a much quicker shutter speed that what we saw above (though still fairly slow compared to shooting during the day).

The feeling here is one of loneliness and isolation. The city is vast and alive, but also harsh and difficult to survive. It lures you in with its pretty lights but ultimately spits you out cold and hungry.

The key for this style of shot is to utilize only the available light (or at least appear to) without the excessive use of any professional lighting equipment or flashes. The natural contrast of the light and dark areas plays into the concept of the shot and should be embraced and experimented with extensively. 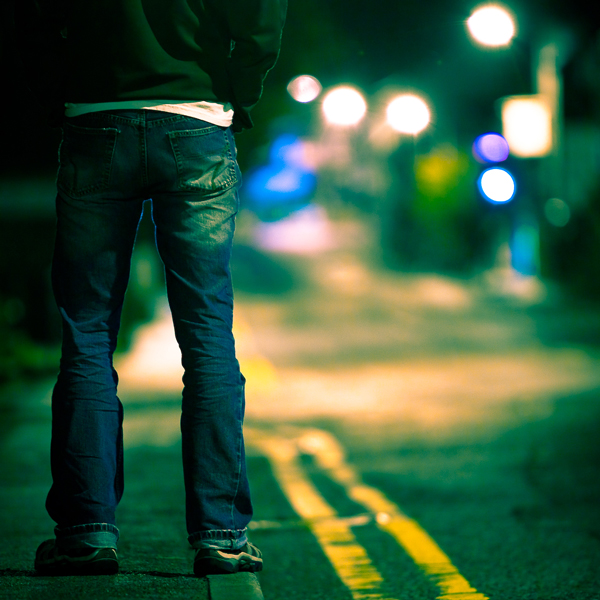 The image above was shot at f/2.8 at 0.25 sec with a 400 ISO. The f/2.8 gives us that excellent blur and helps pull in as much light as possible to prevent the need for a flash. A shutter speed of 0.25 sec is a great way to give a lot of ugly blur to your subject but the person in the photo above fortunately managed to keep fairly still.

There's definitely quite a bit of light on the subject and we're uncertain as to where it's coming from just by looking at the image. The effect, uneven and show producing, is that of a streetlight similar to those you see in the distance. As I mentioned above, this plays perfectly into the personality of the image and allows the photographer to use a shutter speed of less than a second.

One important step here, and in fact throughout all these shots, is to keep a close eye on your camera's histogram. You're likely to have significant clipping on both ends from the dark shadows and bright lights. Do your best to eliminate or at least minimize this so that you have plenty of pixels to pull out of the image if necessary during the post-processing steps. Never trust your camera's on-screen preview! Instead, always let the histogram tell you what's there and what isn't.

This is the high quality professional portrait photograph. It makes the subject look undeniably cool and attractive. Anyone viewing the photo doesn't pity the subject's loneliness as with the image above but instead envies their lifestyle and savoir faire.

This can be the hardest to capture as it often requires significant professional equipment and an impressive knowledge of flash photography techniques and lighting setups. 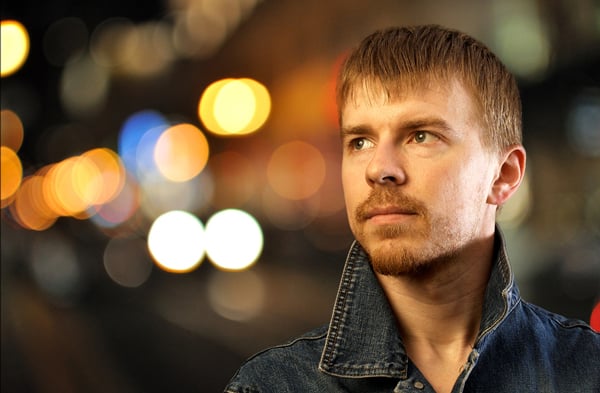 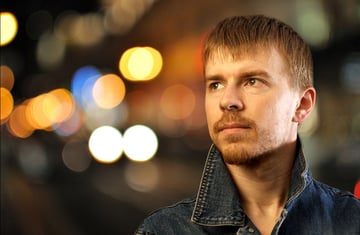 Below is the photographer's description of the settings and equipment used:

The surprising part is that the shot was taken with a Canon 100D. That means the lens on the camera cost considerably more than the camera itself (not too uncommon), not to mention the professional flashes, umbrellas, wireless rigs, etc. This just goes to show you that even if all you own is a cheap digital Rebel, you can without a doubt capture professional quality images as long as you're willing to invest in some decent supporting equipment.

The key for this style of image is to light the subject throughly, but softly. The umbrellas serve to diffuse the incoming light and spread it out out so that the coverage is better and less harsh than the horrid quality produced by a standard unfiltered on-camera flash.

Also notice how the subject is placed on the right half of the frame and looks into the image rather than out of it. This directs your eyes to look around the photo and keeps your attention better than an image where the subject looks out. Psychologically, he seems a bit more content as well this way. If he were looking right towards the edge closest to him, he might seem uneasy and convey the impression that he wanted to be somewhere else.

You can definitely fake this setup with some DIY ingenuity, but it's not going to be easy to reproduce the excellently lit subject on a beautifully rich bokeh background with cheap equipment. For starters, find an affordable lens with a wide aperture. Then place your subject far in front of some nice bright lights of as many different colors as you can find. Finally, use a streetlight, your car's headlights, and anything else you can find to manipulate the lighting conditions until they're just right.

The problem you're going to run into is of course how harsh the light will seem. Use a flash diffuser and/or something reflective to filter and bounce light off of rather than lighting the subject directly.

Show Us Your Night Shots!

Thanks for reading my lengthy spiel on shooting outside in the dark. I hope it's been educational and that you're encouraged to go out and try to replicate some of the image styles shown above in your own unique way.

As always, we want to see your work. Leave a comment below with a link to some of the evening shots you're most proud of taking. Be sure to share any insight or techniques you've discovered along the way!

Lighting
Did you find this post useful?
Yes No
Would you like to provide feedback (optional)?
Cancel Submit
Want a weekly email summary?
Subscribe below and we’ll send you a weekly email summary of all new Photo & Video tutorials. Never miss out on learning about the next big thing.
Sign up