Every two weeks, we revisit some of our reader favorite posts from throughout the history of Phototuts+. This tutorial was first published in December of 2009.

This tutorial will make for a fun weekend project that has the potential to spark your imagination, teach you some interesting lighting techniques and even give you some great shots for your portfolio. It's a great way to spend a few hours, experimenting and honing your photography skills. 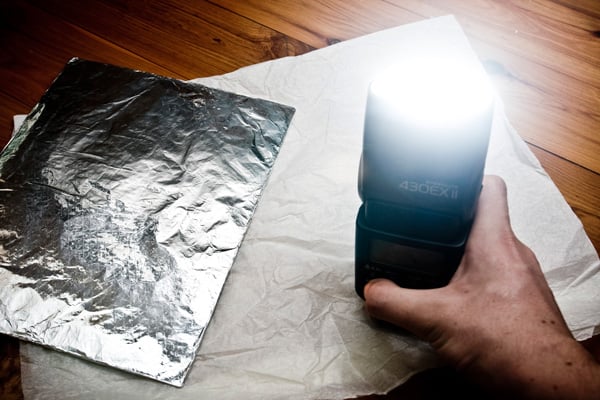 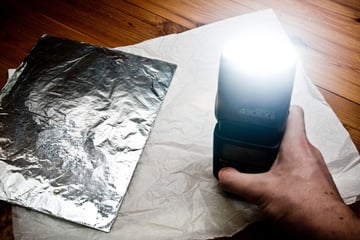 Although from the picture below, the setup may seem fairly complex, it is actually quite simple. Put your camera on a tripod, facing your glass vessel for splashing, placed on a black surface, roughly a metre from a black backdrop.

For the lighting (the most important part of this experiment) it is best to shoot the flash through some kind of moderately transparent paper (like "Glad Bake") to diffuse the light slightly. I also used some aluminium foil, taped to a piece of cardboard to reflect some of that light back on to the setup. More on this in step 4.

The red candles and mic stand are there to help hold everything up, though the redness of the candle adds some nice red highlights to the splashing water as the light bounces off it. 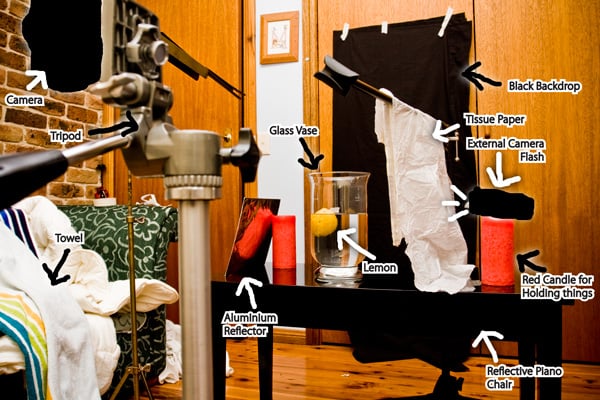 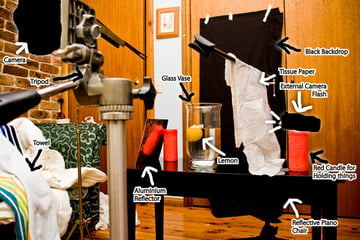 The key to getting your high speed photos looking good is your camera's settings. The first thing to pay attention to is your lens. I chose a 50mm lens as it kept the camera dry yet did not send me too far away from where I needed to be dropping the fruit.

You will need to ensure that there is as little ambient light as possible, so turn off all lights, shut doors and cover windows. I found that I could get an almost black image if I used an aperture of f/5.6, shutter speed of 1.3 seconds and ISO 250. These settings will ensure that everything stays in focus, we have long enough to drop the fruit and take the photo and that the flash can be used on a relatively low power (smaller aperture -> brighter flash -> longer flash duration -> blurry photos).

For focus, frame the image as you want it for taking the photo, put your piece of fruit in the jar and focus on that using auto-focus. Once focus has been achieved you can switch the camera back to manual focus. Make sure throughout your shoot, you check that nothing has been moved and the focus is still tack sharp.

It is important for you to shoot with your camera in RAW instead of JPEG. Though many debate this fact, I believe that it makes post-processing easier and more effective.

Also, if available on your camera, shoot with a two second or ten second timer delay. 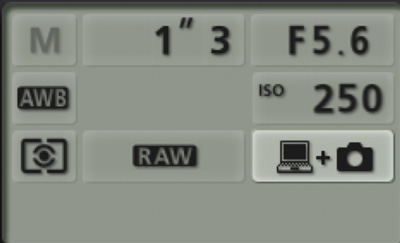 It is important to light this well so that you don't need to do a major operation during post processing. It is important to get the background at least a metre away from your main set-up so that no light is spilt onto it and it remains completely black.

When choosing which flash to use, make sure that it has manual power control and can also be manually triggered (generally by a "test" button). Because you will be manually triggering the flash during the exposure to time it with the splash of the apple (rather than timing, dropping the apple for the flash which is harder) you do not need a wireless flash trigger, just some ninja reflexes and timing (it isn't really that hard).

Shooting the flash through a paper diffuser will allow for softer light and nicer specular highlights on the apple, glass and water. The paper will also play a huge part in keeping your flash dry.

I also made a home reflector by taping some foil onto a piece of cardboard. Placing this on the opposite side of the glass vase to the flash added some fill light, to keep everything nice and even.

Once this is properly set up do some test shots to see how bright you need the flash. Remember that using a smaller flash output will lead to shorter flash duration and sharper photos. I found that 1/32 power worked well for my Canon 430EX II but this will depend on flash model, distance from subject and the thickness of your diffuser. Just make sure that you keep things consistent throughout your shoot.

This step is the fun part. You will need to master the art of pressing the shutter with your left hand, waiting for the timer to end, then dropping the fruit with your right hand and firing the flash with your left hand (or with your hands the other way around). I'll break that up a bit for you:

I find that you get the best splash in your photos if you trigger the flash as the fruit hits the bottom, though this will take a lot of trial and error and you will probably end up with a lot of photos of your fruit hovering over the surface of the water. The key is to take a lot of photos.

After uploading your photos to your computer it is important to choose your favourite few, because you don't want to go to the effort of editing every single one. I find that as these pictures often differ a fair bit, batch processing is not very effective.

I chose about 5 that I wanted to take to Photoshop. Make sure the images that you are choosing are well focused and have an interesting or unique splash in them, either are really big splash, or a cool pattern.

The first thing to do after choosing the best few photos is to open them up in Adobe Camera RAW. This process can vary greatly from camera to camera so you may need to research that process elsewhere, but as long as you have a relatively new version of Photoshop you will have this little application.

Once you have an image open in Adobe Camera Raw, it is good to make sure it is straight. If your tripod wasn't aligned properly (like mine) you will need to use the straighten tool to get things looking upright.

I then made the following edits in the "Basic" tab on the right hand side. "Blacks" were increased to 10, "Brightness" to 80, "Contrast" to 87 and "Clarity" to 100. These are not exact values, but they help get the image looking nice and sharp and contrasty. I also decreased the "Vibrance" to -49 and increased the "Saturation" to 62. This helped bring out the yellow in the lemon and the red in the reflections in the water, while reducing some of the other colour slightly. 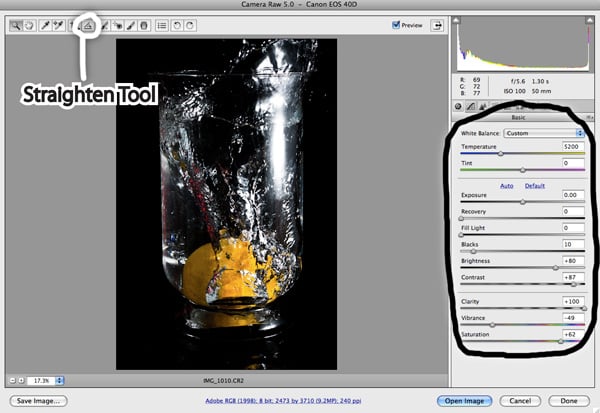 Now that the image is in Photoshop proper, it is good to add a little more contrast. To do this, simply duplicate the layer by hitting "Command-J" on the keyboard ("Control-J" for Windows users). Now go to the layers window where the new layer should already be selected and change the blending mode from "Normal" to "Overlay". Then to reduce this effect, drag the layer's opacity down to 50%.

With this particular image, I found that after all of this editing, there was no detail left in the reflection on the chair. To fix this I re-opened the original RAW file in Adobe Camera RAW and then dragged the "Fill Light" slider up to 60. I then clicked "Open Image" again, selected all of this new picture in Photoshop by typing "Cmd-A" ("Ctrl-A" for Windows) and copied it by typing "Cmd-C" ("Ctrl-C" for Windows).

The next step is to return to the original Photoshop file and paste in the newer, lighter image by typing "Cmd-V" ("Ctrl-V" for Windows). Now click on the "Add Layer Mask" button, next to the fx button in the layer window. To hide this layer, invert the mask by typing "Cmd-I" ("Ctrl-I" for Windows). Now select a large, soft brush, change the foreground colour to white and paint in that lower area where the reflection is. You should see a big difference in the amount of detail as you bring back the lighter layer.

I think that these images look better when presented in landscape mode, so click "File" -> "New". Check that the dimensions for width and height are the same as in the current image. If they are, leave the height the same and to find the new width, multiply the height by 1.5. For example, 3710 (current height) x 1.5 = 5565. Type in this new value for the width and click "OK".

Things are looking pretty good now, but I like to take out a soft black brush and paint over some of the spots and drops that don't seem to belong. For non-destructive editing you can do this on a new layer, but that is up to you. 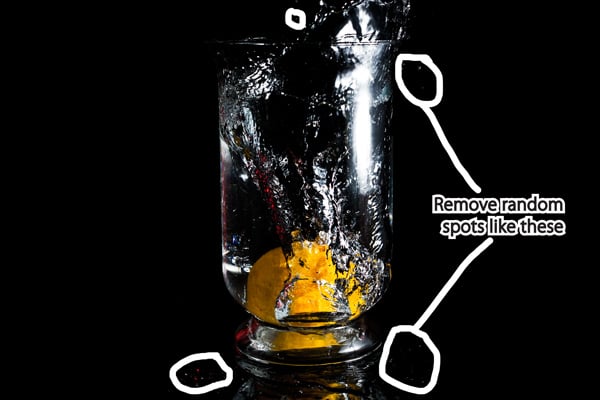 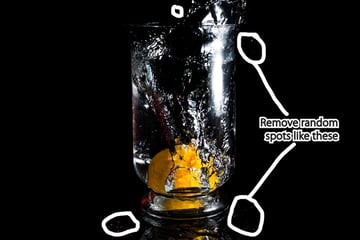 Final Image and Other Examples

Now you are all finished. Make sure that you experiment a lot to make this your own. Here are a few of my examples, using the same set-up and processing. 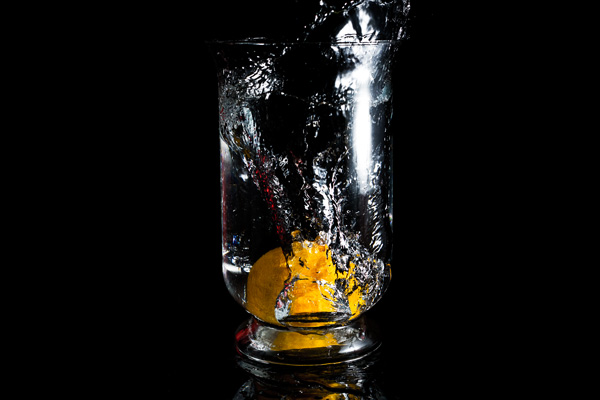 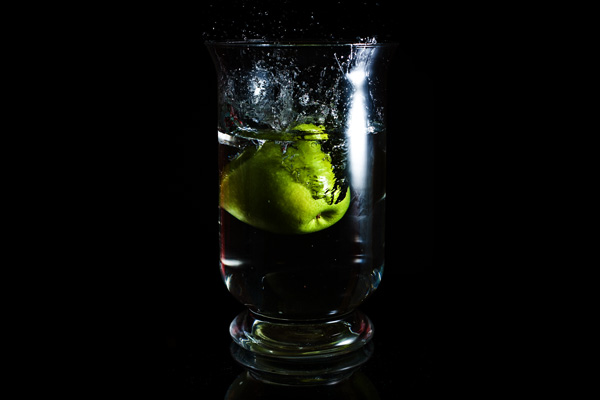 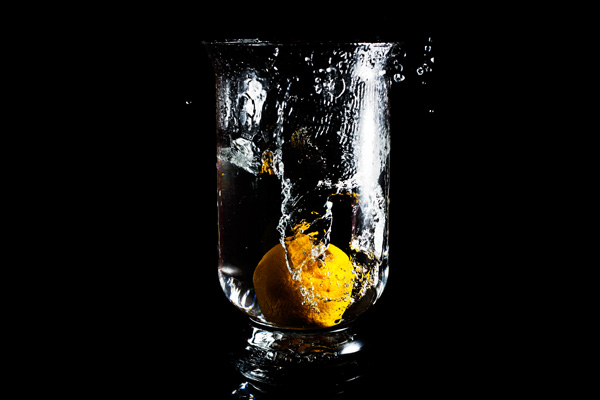 ShootingCompositionSpeedlightsAdobe Photoshop
Did you find this post useful?
Yes No
Would you like to provide feedback (optional)?
Cancel Submit
Want a weekly email summary?
Subscribe below and we’ll send you a weekly email summary of all new Photo & Video tutorials. Never miss out on learning about the next big thing.
Sign up

Jacob Wighton
My name is Jacob Wighton and I am 17 years old. I am very keen on my photography (possibly too keen) and I'm always trying to learning more about this great art. On the side, I have also just entered my final year of school.