It seems that smartphones are taking over the world of photography. They are certainly helping maintain the popularity of photography as a creative pastime. Just the other day an old friend of mine mentioned that he was interested photography now, largely thanks to the Instagram app. But with so many photography apps out there, how do you know which are the best?

Some of them could be politely described as "rubbish," others seem more like gimmicks aimed at beginners than genuinely useful apps. To help you out, I’ve sought out six genuinely useful photo apps. These will help you take better photos, or edit the ones you already have.

This is an exciting time for app development. Smartphones are great, but their screens are too small for many things. Tablets like the iPad and the numerous Android tablets on the market have changed all that. The screens are big enough to be useful for photo viewing and editing and to look at for longer periods of time without getting a headache. I’m sure that app developers will be taking advantage of these features in the future.

The simplicity of this app and the social network behind it makes it one of my favourites. You use it share a photo that you’ve taken with your iPhone’s camera or one that is saved in the photo albums. You start by cropping the image to a square (I wrote an article on the square format here) and then you apply one of 16 creative filters to the image.

Most of these simulate vintage film or toy camera looks, and it always seems possible to find one that makes your photo look cooler. Once you’ve applied a filter, the app uploads the photo to the Instagram social network and saves it to your camera roll.

The social networking side of the app really is unique for an app (well, apart from the Flickr app mentioned next) – users can share their images with the Instagram community. It works like a simplified version of Flickr in this respect, you can follow other users, tag your photos, view popular images and like or comment on photos. The app creates a news feed showing the latest images and news items from the photographers you follow.

The popularity of Instagram means that there is high demand for an Android version, something the developers have made a priority. In the meantime, you can also browse Instagram photos on the Webstagram website. Try the Photo of the day or you can search the tags. You’ll also find some cool photos and Instagram tips here. Other Instagram related websites worth checking out are Instagramers and Inkstagram. 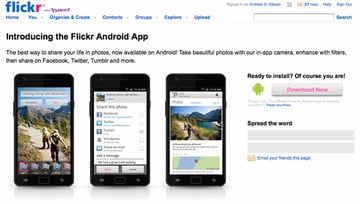 Flickr have their own app for Android which is remarkably similar to Instagram in that it has creative filters that you can apply to your photos. Flickr’s photo sharing and social networking site needs no introduction to the majority of our readers, but the Flickr app means that there’s no need to feel left out if you have an Android phone. There’s a Flickr app available for the iOS as well, but it lacks the creative filters of the Android version and is really just designed for uploading photos and exploring content on the Flickr website.

Snapseed is the first app released by Nik software, the makers of well-known and popular plug-ins such as Silver Efex Pro 2 (I wrote an article about it for PhotoTuts+ here), Viveza 2 and HDR Efex Pro. Snapseed was written for the iPad and the iPad’s larger screen makes it easy to use but the app works on the iPhone and iPod Touch (3rd and 4th generations) too.

Snapseed, like the Instagram and Flickr apps, works by letting you apply filters to your photos. Unlike those apps however, it gives you complete control over how the filters are applied. For example, some of the creative filters contain textures, but Snapseed lets you alter the transparency of the textures. So, if you like a certain creative filter, but dislike the texture, you can set the transparency of the texture to zero. The creative potential of Snapseed is revealed when you start applying one filter after the other. The possibilities are literally endless – the Grunge creative filter alone has 1500 style variations. It’s good for both colour and black and white photos, although the black and white conversion tool is limited compared to what you find in Photoshop and Lightroom.

Snapseed is easy to use – there’s an overlay which you can call up at any time which explains how each filter works. Editing is simply a matter of swiping up and down to select a function and swiping from left to right to change its setting. It really is an intuitive way of working and doesn’t take long to get the hang of. If you use it on an iPad rather than an iPhone it feels like a very natural way of working, and much more fun and playful than using a desktop or laptop computer with a mouse.

Snapseed is also a competent photo editor in its own right, with options to adjust brightness, contrast and white balance. It can edit RAW, Tiff or JPEG files, the only thing to watch out for is that it downsizes large files to a resolution of 2304x1536 pixels. This reduces its potential for ‘serious’ photo editing, but it’s not an issue if you want to make small prints or display your photos online. 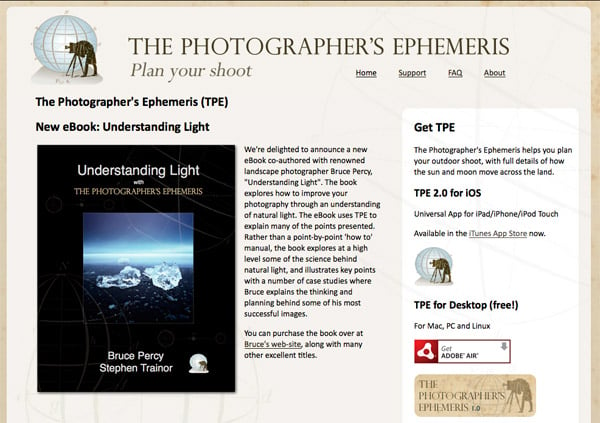 The Photographer’s Ephemeris is a tool that helps you take better landscape and outdoor photos. It does this by calculating sunrise and sunset times and locations anywhere in the world. This means that you can use its mapping system to work out in advance where and when the light will be at its best. This can save you a lot of frustration in the field as you can work out where the sun will rise or set before you arrive at a location, and even work out the best times of year to go somewhere. If you’re into night photography it also tells you when and where the moon will rise and set, and what the phase of the moon will be, to help you plan your night shoots.

The Photographer’s Ephemeris is available as an app for the iOS, but it’s also available as a free download for the Windows, Mac OS X and Linux operating systems. According to the website, the Android version is under development. 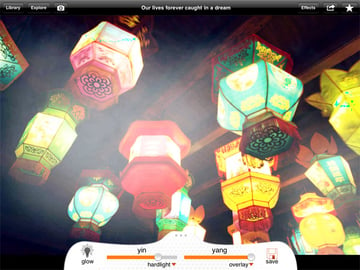 Developed by Trey Ratcliffe, author of the Stuck in Customs blog and flag-bearer for the HDR movement, 100 cameras in one is another app with a mixture of ‘serious’ and fun, creative photo editing tools. It’s available in two versions, one for the iPhone and a more advanced edition for the iPad. There are a hundred different effects that you can apply to photos saved on your device or that you take with its camera. There’s kind of a hippie feel to the app as the effects have poetic titles like ‘Our lives forever caught in a dream’ and ‘A glacier breaking, the water grasps’.

Once you’ve found an effect you like the fun really begins as you can edit the effect. The ‘yin’ slider controls the strength of the texture (all the effects come with a texture) and the ‘yang’ slider does something that I still don’t quite understand (it’s something to do with the image being layered on top of itself, according to the instructions) but definitely adds a little mystery to the image. There’s a glow button that adds an ethereal glowing effect and you can enter the advanced editor and adjust the strength of the vignette and the contrast and brightness of the image.

The photo sharing side of the app has been well thought out. You can send your edited photos to Facebook, Twitter, Flickr, SmugMug or Instagram or send it by email or send to your Dropbox account. By the way, if you’re not into HDR photography, don’t let that put you off trying out this app. Most of the examples on the website involve HDR photos, but the creative filters work just as well on non-HDR images. 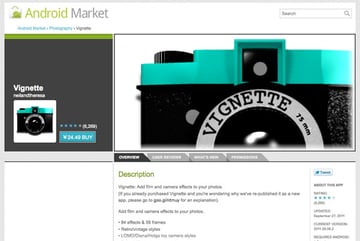 Vignette is one of the more popular and highly rated Android apps. Another app that exploits the current trend for the retro look it comes with over 80 creative effects and 50 frames. It’s a feature rich app that includes retro/vintage creative effects including Lomo, Holga and Diana toy camera filters, cross-processing, double-exposure and a Polaroid filter. There’s a free demo version, with limited features, to try out.

Tell us your favorites

There are photography apps coming on to the market every day. Trying to keep up is tough. Please share your favorites in the comments below, especially if you're an Android user. We try to cover all our bases here at Phototuts+, but it seems that most of us are iOS users. We don't want to leave anyone out.