Today we'll look at a few of the benefits of shooting with a wide aperture. If you're new to photography there will be some key insight here into one of the biggest factors for taking professional quality photos that will stun your friends and family. After this, we'll take a look at several lenses that will help you get to f/2.0 and wider without forcing you to give up food and electricity for the next six months to make the purchase!

Why Don't My Photos Look Amazing?

So you finally decided to get serious about photography and went out and bought a new camera. If you're like most beginners, you picked up something high quality but affordable like a Canon Rebel or Nikon D80.

These types of cameras often come with a basic "kit lens." In the case of my own Rebel T1i, the kit lens was an 18-55mm f/3.5-5.6. I want to be clear that there's absolutely nothing wrong with shooting with this lens. It's versatile and can be used in a number of different situations containing varying lighting and distance factors.

However, you've probably noticed that the photos, in particular the portraits, you've been taking with your kit lens are good, but not great. They're far better than what you could get with a cell phone or flash and trash camera from the drug store, but not quite something that you could make a living selling.

As an example, consider the image below. 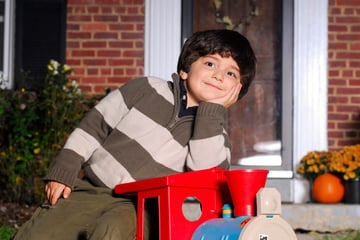 This is a nice shot. It's cute, engaging, bright and crisp. However, the subject doesn't quite pop the way you see in many professional portraits.

Now consider this next image: 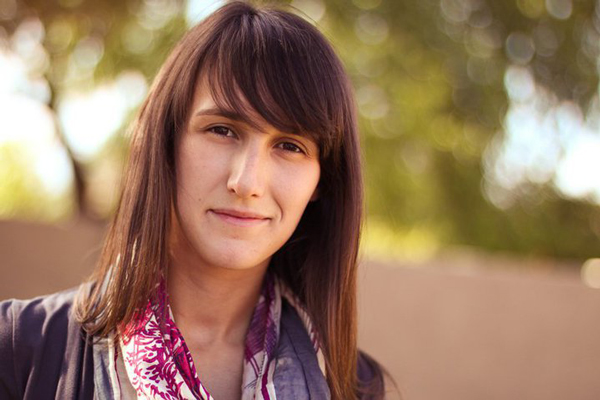 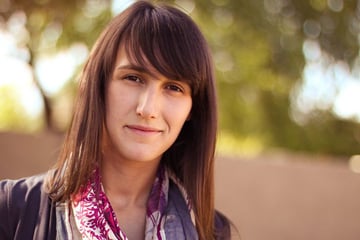 There's something fundamentally different about this image isn't there? Something that immediately makes it seem high quality and professional. Something beyond the closer crop and even the lighting in the scene.

The answer is completely obvious to some but remains somewhat elusive to others. In case you missed it, it's the background. In the first image, the background is slightly blurred, but is still perfectly decipherable and therefore demands much of your attention. The house in this shot detracts from the main subject, which is of course the boy. It's not that the house is ugly or uncommonly busy, just that it's in-focus enough to make your brain feel like it's an important part of the composition.

In the second image, the background has been blurred out so much that it's actually difficult to even decipher what's going on back there. This causes your brain to interpret this space very differently than the sharper space in the foreground. By mimicking the way your eyes focus, this shot creates the subtle illusion of depth in a two-dimensional image. 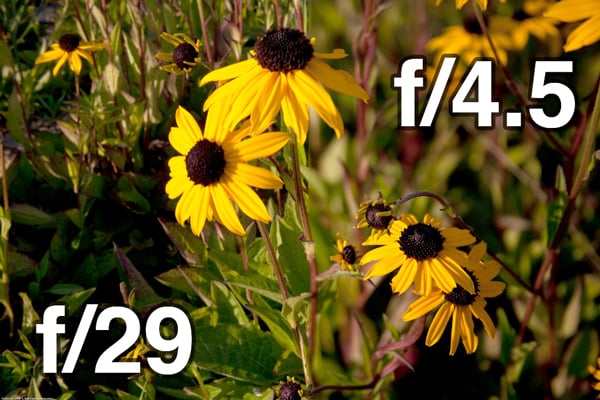 As you can clearly see, the background gets much blurrier as the aperture widens (the lower the number, the wider the hole that lets in light will be).

Perhaps even more of an issue for many photographers is the need to shoot in poor lighting conditions. Whether you're getting paid to photograph a wedding in a dark church or just want to take some nice indoor shots of your family on Thanksgiving, a lens that can grab a lot of light is a necessity.

Obviously, a flash is mounted on your camera for this very purpose. However, built-in flashes tend to be quite harsh if not diffused properly. You can and should invest in portable lighting equipment, but there are still plenty of opportunities where you either won't want to or won't be allowed to use a flash.

One of the benefits of a lens with a wide aperture is that it can collect a ton of light. If you've ever shot during sunset as the available light is decreasing, you know that there are plenty of times when you need to capture every photon you possibly can!

In these instances, the shallow depth of field again has an impact. Just be sure to zoom in and take a look at your photos to make sure the important parts of the image are staying crisp. If you're shooting people, it's a good rule of thumb to focus on the eyes.

Can I Afford A Good Lens?

After reading the information above, you're probably ready to grab your camera, blast open your aperture and go to town. The trick is, every lens has its limit for just how wide the aperture can go. As I stated above, the kit lens that comes with a Rebel T1i tops out at f/3.5. This is fine for many purposes but definitely not ideal for capturing blurry, rich-bokeh backgrounds.

The solution is of course to go shopping for a new lens. Unfortunately, this can be quite straining on your checking account. Take for instance the lens below, which retails at a whopping $1,830. Also consider that this is by no means the far end of the quality or price spectrum as many professional photographers spend several thousand dollars for each lens they use.

If you've got the budget, a lens like this can really bump up the professional quality of your photographs. However, I'll bet that most of you are like me and would rather read about something a little more affordable.

Fortunately, there are a few options available for the budget conscious photographer looking to hit f/2.0 and wider for less than $500. All prices are estimates based on those listed on the manufacturer's websites.

If you're really set on achieving a fairly wide aperture but don't really have much money to burn, look no further than the Canon EF 50mm f/1.8 II, also lovingly referred to by many photographers as the "thrifty fifty."

Short of a pirated copy of Photoshop and the Lens Blur filter, this is by far the cheapest way for Canon users to achieve nice blurry backgrounds in their photos (around $100 brand new).

This lens produces beautifully crisp images with decent (but not great) color and is as compact and light as any lens you'll find.

The downside is that the construction mirrors the price. It's a fairly cheap feeling lens comprised mostly of plastic. Further, many users report that the less than optimal five aperture blades tend to produce relatively poor bokeh.

Still, at a hundred bucks it's definitely not a bad place to start.

The Nikon users out there definitely have an excellent answer to the Canon 50mm f/1.8 in the Nikkor equivalent.

It's a very similar lens in all respects to the Canon version. The construction is mostly plastic, making it feeling cheap but also super lightweight. Further, the autofocus is super fast and critics rave on the surprising crispness of the image quality for a lens so affordable.

If you're a hobbyist and don't really see yourself ever making money from photography this is a perfect first lens purchase.

Canon's next step up takes a rather large leap in price up to $389 (if you look around, it's fairly easy to find in the $350 range). I own this lens and simply can't say enough about it. In fact, it was used for the image of the woman above.

The images are crystal clear, the construction feels solid, there are eight aperture blades instead of five, and it's still really small and lightweight, though obviously not quite as much as the 1.8 above.

I was initially worried about the lack of a zoom, but I found that I really like the 50mm prime because it makes focusing much faster. It's a perfect zoom for shooting what you see and it's occasionally nice to have one less variable to worry about.

The USM (Ultrasonic Motor) is much quieter than my kit lens, but not quite as quiet as I was hoping it would be. I've used some of the pricier Canon USM lenses that were ridiculously smooth and the 50mm f/1.4 certainly falls well beneath these.

Tons of photographers all over the web agree with me that this lens is really an excellent buy for anyone with a low to mid-range budget. If you can afford to choose this option over the thrifty fifty, go with it and never look back.

All of the conclusions drawn for the jump from the Canon f/1.8 to the f/1.4 apply here as well. If you're really strapped for cash, go with the f/1.8, but if you can scrounge up the extra couple hundred bucks, absolutely go with the f/1.4 instead.

The leap from 1.8 to 1.4 might not sound like much, but when you're shooting low light, you'll never be sorry you spent the extra money.

This lens is extremely fast and produces images that are sharp enough to rival lenses three times its price. As far as I can tell, you'll be every bit as happy with this lens as I am with my Canon 1.4.

Due to their affordability, the selections above represent my suggestions for where to start your search. However, for $500, you can find several more outstanding lenses even higher in quality than those we've already seen. Here are a few to check out:

I hope this article has helped make the decision for your next lens purchase a little easier. Keep in mind that the lenses above are straight from Canon and Nikon and that even more affordable alternatives can often be found from other manufacturers such as Sigma and Vivitar.

Leave a comment below and let us know your recommendations for a good lens below $500. Tell us about that one affordable but high quality lens that you simply couldn't be without and why.

LensesDepth of FieldApertureFast Prime Lenses
Did you find this post useful?
Yes No
Would you like to provide feedback (optional)?
Cancel Submit