The power of small flash units is really remarkable. From battery powered flash units, we can pull enough light for portraits, wildlife, and lighting entire scenes. However, sometimes that light can be harsh and unflattering to subjects. Modifiers are a fantastic way to soften the light and spread it more evenly, and today we'll be looking at one of the best ones out there, the LumiQuest Softbox III.

The entire purpose of a softbox is to soften the light from a flash source. If you've visited or checked out the setup of big photo studios, you might have noticed big flash units, often called monolights or strobes. You'll almost always see some type of modifier attached to these unit, whether it's a big umbrella, a softbox, or a more unique type of modifier such as a beauty dish.

The truth is that for flattering photos of subjects, direct light from these units is almost always too harsh and throws unsightly shadows on the person being photographed.

When we think of light, we should always keep in mind the size of our source. An example that I frequently use is the sun and clouds. If you've ever been out and taken pictures on a bright and sunny day, you'll notice the harsh shadows almost anywhere you look. Portraits in direct sunlight will feature big shadows under the chin or around the eyes, depending on the placement of the sun.

Now, consider the quality of light that you'll observe on cloudy days. Even if you can't see the sun directly, it passes through the clouds and is softened. Shadows on subjects are almost unobservable when there are clouds to diffuse the sun's rays. In some ways, clouds are the world's largest softboxes. They increase the size of the light source (in this case the sun) from a tiny dot in the sky to the size of the entire sky. The light is then described as soft.

The relationship in size with flash units is much the same. If we use a bare flash, the quality of our light is going to be harsh. We are pushing a lot of light out of a relatively small rectangle, so harsh light is the result. You'll see photographers bounce flash to get around this, but another great way is to use a softbox. 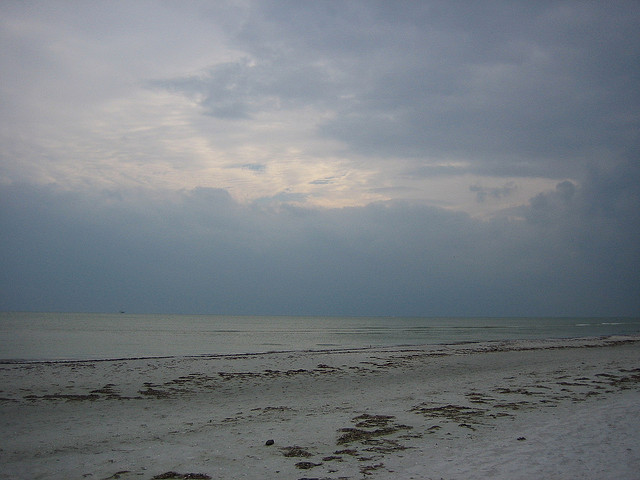 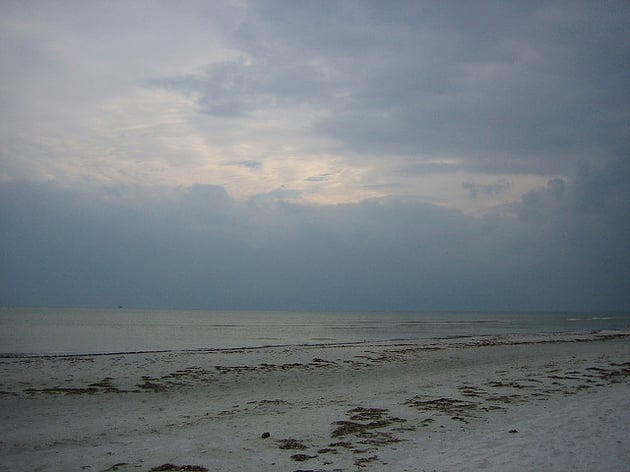 You might not consider overcast days to be great for portrait shoots, but the truth is the giant clouds act as great softboxes for the the sun. Photo by Claire Whitehouse.

The important part of my personal flash philosophy is mixing ambient light with light from flash units. If you aren't familiar with the term "ambient", it simply refers to the light that's already in a scene. It can be something like the sunlight coming through the windows, or the lamp that lights up a living room. Sometimes, it's not enough to light a scene, so we mix in flash with the ambient light.

However, flash can have a dominant effect. This is where a softbox becomes invaluable: softening the light introduced by the flash to appear more like ambient.

As you may have already learned with photography, there are rarely absolutes. Soft light isn't what we are always looking for, but when we do, we look to softboxes as the perfect way to lose the harsh shadows and provide great light.

Awhile back, I began becoming interested in using flash in a less obtrusive way. I loved that I could manufacture my own light on location, but I wasn't always pleased with the quality of light that my flash units provided me. I once told a friend that my goal with flash was always to make it seem as if I hadn't used flash.

When a fellow photographer offered up this softbox as a solution, I took the plunge. It was inexpensively priced at under $40 and was virtually a no brainer. Additionally, it didn't require any type of special connector or attachment to affix to my flash unit of choice, and worked with all of my flash units.

The LumiQuest Softbox III is fantastic because it folds flat and fits in the side pocket of my camera bag easily.

Another one of the things that attracted me to this product was the amazing form factor that it provides. It can fold down and fit flat in my camera bag and can spring to life in a matter of seconds.

The best modifiers are the ones that you will actually carry, so this softbox scores big in this category. I've got enough big accessories that stay at home because they're inconvenient to carry. So when I add something, size is always important.

After receiving the softbox, I couldn't wait to get started with lighting scenes. Setup was nearly instantaneous. The flaps of the softbox have the crinkly velcro that attached to the soft velcro on my 285HV. One thing that I might suggest is to pick up a Honl Speed Strap. This wraps around the flash and the softbox and keeps the connection tight. The softbox is pretty lightweight so it won't fall off easily. 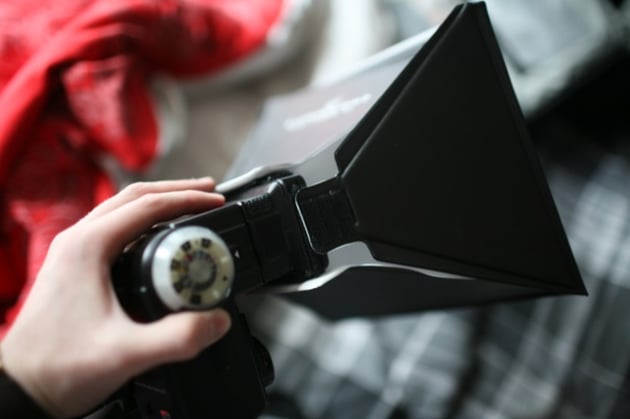 I affixed the softbox to my flash unit using velcro on the flash unit. The softbox has flaps with crinkly velcro to attach to the soft side of velcro.

The softbox does a great job of softening the light and increasing the area of your flash.

I used some metallic, reflective blinds to give you a better idea of how this softbox modifies the light. The top photo shows off the effect of direct flash, while the bottom shows off the impact of the LumiQuest Softbox III. As you can see, the light has a much greater spread and throws off far less harsh reflection in the center. The reflection from the blinds is different because the light is softer when you use the softbox. Harsh light throws back harsh reflections, so imagine the ways that a softbox will aid in providing high quality light in portraits. 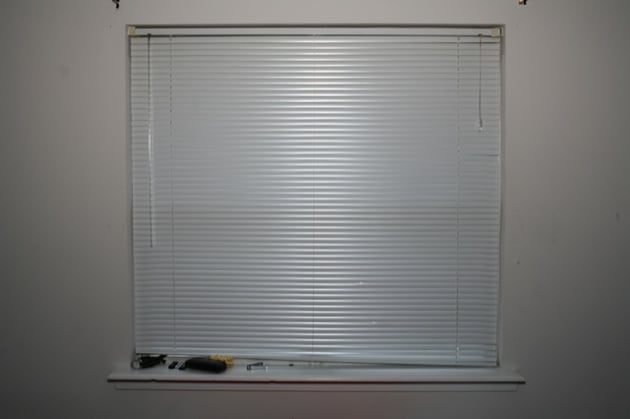 In this photo using bare flash, some reflective glare appeared in the center of the image.

This photo used the softbox and the result is a much greater, even spread of light. (The vignetting was an effect of the lens and aperture being used)

The cool thing about softboxes is the fact that they can be used for so many different things and in so many different ways. I spent the afternoon making some shots with this softbox to show off the variety of things that can be accomplished with it and a small flash unit.

It doesn't take renting space and furnishing a studio to get those great studio quality photos. With this softbox, all it takes is a flash unit and a large enough space to manufacture studio style portraits from anywhere in the world. 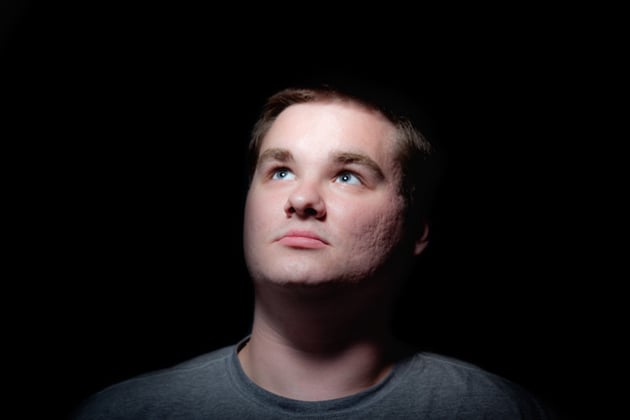 I again recruited my friend for what would appear to be a "studio" type black background photo. In reality, the image was made in the middle of the road using only a chair and the LumiQuest Softbox III with a flash unit. Adding in a simple reflector or another light could really complete the look and provide a "studio on the go" type setup.

One of my favorite tricks to light creatively is to apply gels. It can make a part of a photo really stand out. Gels are simply colored, semi transparent thin plastic that go over flash units to change the color of the light involved. 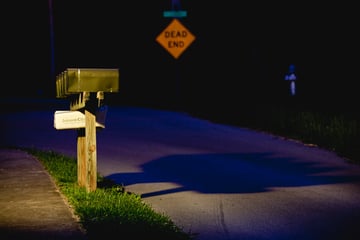 In this photo, I used the flash with a softbox and a yellow gel to light the mailboxes outside my apartment. It makes them stand out and appear unnatural in a good way, although the softbox makes it look perhaps as if I didn't use a harsh flash. The effect here is to provide a light that appears from nowhere, yet doesn't have the telltale look of bare flash.

The truth of the matter is that you will rarely have ideal lighting for photographing a person. Although natural light works quite frequently, the truth is that only flash can provide certain lighting looks. If that's what you're looking for, the need to introduce flash arises.

However, with bare bulb flash (no modifier) we are somewhat tied to a look. Bare flash is harsh. Again, this isn't always bad, but if we're looking for natural yet unique lighting, introducing flash with the LumiQuest softbox III attached is the perfect solution.

That's exactly what I applied when I ventured out for the evening with a friend. We were testing it and fired a test shot in the nearby woods in front of some train tracks. It was almost pitch black, but we used the softbox with our flash unit to provide simple yet effective lighting. 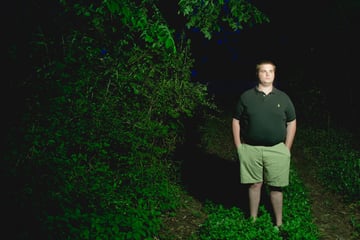 This photo used the flash with the softbox to the right of the camera to light the scene. Despite being almost completely dark, the softbox was an improvement over the rather harsh lighting of bare flash.

In all, I can't recommend a softbox such as this one enough. It may sound cliche, but it's truly a game changer when it comes to using small flash units. I feel as if I can get the best of both worlds, portability and quality, from the small flash units that have somewhat limited my lighting style in the past. Inexpensively priced and extremely portable, it's not hard to justify a spot in your bag for it.

The examples above show just some of the applications of a softbox with a flash. However, these are just a few of the great applications for it. You can turn to a softbox any time that you want to subtly add in your own soft light. Bare bulb flash certainly has its place in my list of flash tricks, but I find myself turning to applying natural flash techniques more often that mimic the look of ambient light.

How do you feel about using modifiers on the go? Have you picked up something like the LumiQuest, or are you a bare bulb flash fan? Make sure to chime in with a comment to let us know.

SpeedlightsSoftbox
Did you find this post useful?
Yes No
Would you like to provide feedback (optional)?
Cancel Submit
Want a weekly email summary?
Subscribe below and we’ll send you a weekly email summary of all new Photo & Video tutorials. Never miss out on learning about the next big thing.
Sign up