Using Polar Coordinates to Turn Landscapes into Planets and More

Photoshop lets you do some curious experiments, like creating your own planets. It's a fantasy world that starts with a panoramic image and ends with a photograph that will amaze your friends. Try this! 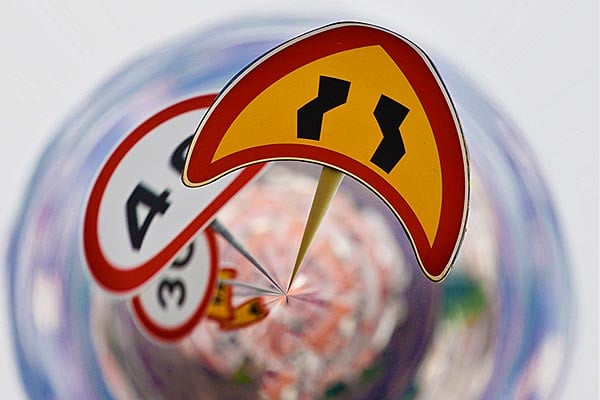 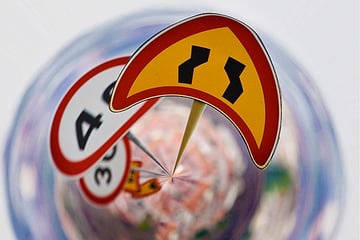 The technique lets you create orb shaped photographs that look like planets.

Let me show you how to create a planet. I call them "planets" because of the round shape they get and that in some cases looks exactly like a planet. The idea is not mine, in fact I recall it from the first Yes album with a cover drawn by Roger Dean (I still have the LP in my collection), launched in November 1971.

Yes was/is an English progressive rock band. So progressive, in fact, that they needed a different image for the cover of their fourth album, and this was the first of a series of works by Roger Dean for them and other rock groups. And it was a planet.

I guess all of us dreamed of these planets for years and drew some on pieces of paper while in college. I know I did. But it was only with Photoshop - or any program letting you do this trick - you could start to create your own planets using photographs.

I've done some this new way, from time to time, and while the technique is not hard to learn, you'll soon discover that not all images, even panoramas, are suitable for this treatment. But once you get the right image it's a fun experience. 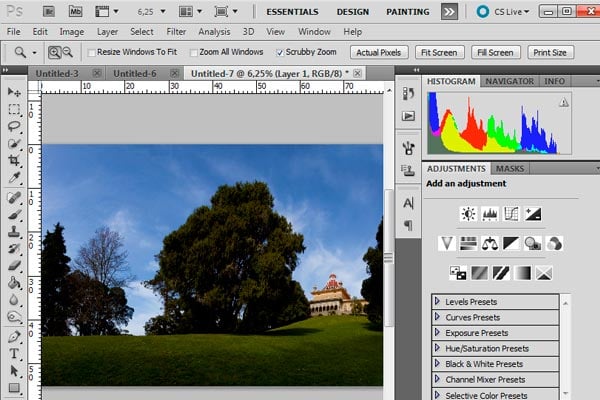 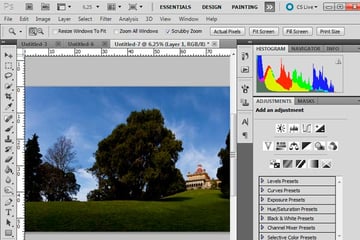 Sometimes choosing the right image to use takes more time than the technique itself.

You start by choosing an image that shows potential, usually one with clean edges, so it will be easier to clean the final stitched area. Once you learn the process, it is rather quick to see results, trying different images, to define which are best. The best way to do this is to follow the tutorial.

Choosing the image is the first part of the equation. Then you need to define which area to use. Panoramic images are usually presented as the right choice. But I've found out that sometimes you need to crop them to get rid of areas that can be troublesome. For this example I used a panoramic image cropped to get trees about the same size on each side, to make a cleaner join when the image rotates.

You have to forget the idea that images are proportional, if you want to create planets.

Once the image is cropped I need to make a square. To do that I go to the Image Size menu in Photoshop, deselect Constrain Proportions and define the side of the image, making sure that Height and Width are the same. Click OK and you've a perfect square on the screen. 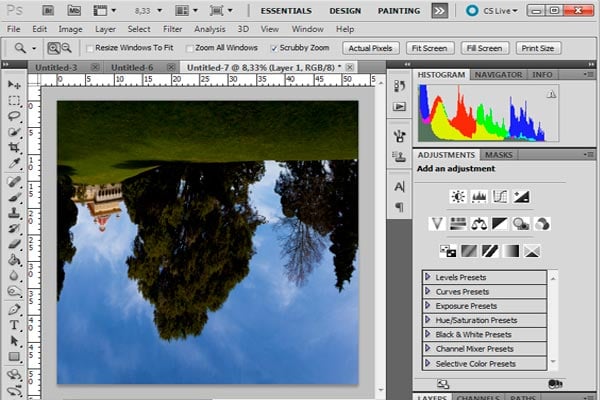 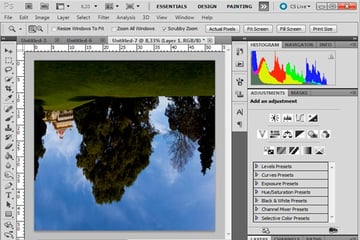 To make things even more strange for a normal photo workflow, you have to rotate the image.

The next step is to get the image upside down. To do that go back to the Image menu, choose Rotate Canvas and choose 180 degrees. You'll get the image in position for your next step, which is the most fun part of the process. 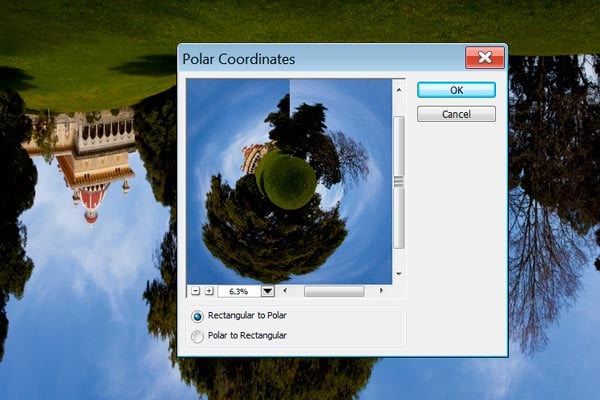 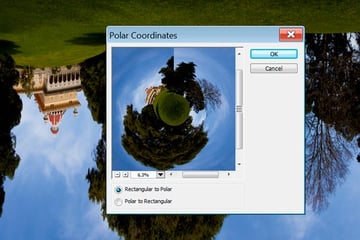 The preview window gives you an idea of the final result.

Once you've the image upside down you can go back to the menu and choose, Filter, then Distort , then, again, Polar Coordinates and click on the Rectangle to Polar option. You can see a small preview of your final image and once you accept it, depending on the size of the image and speed of your computer, you'll get your results in a few seconds. Amazing!

The result can be astounding but believe me, sometimes it can take time to get everything right.

The feeling one gets once the first planet is done is about the same as the older of us got when they saw Roger Dean's cover for Yes's Fragile album cover: amazing!

It's true, but it might not be that easy when you first try. Looking closely at your final image you might find it has problems in the join area that are difficult to solve. Sometimes a little retouching will be enough, other times is better to crop the image another way - as I did with this one - in order to get both sides looking similar, so they blend almost perfectly. It's a bit of trial and error but with practice you'll begin to understand what works best.

For my example above I cropped the image to make sure I had the round area on the green lawn forming a circle that is almost perfect. And because I had cut both sides to have trees at about the same height, I just had to use the healing brush on a small area of the green lawn and then the clone stamp and healing brush on the single join line formed on the right side of the image. Obviously, I rotated the image until I got the Palace in the position I wanted.

6. It's Not Just For Landscapes! 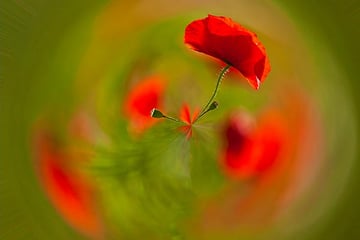 Pick a few images from your collection and try this technique. Not all of them work but you'll get an idea of the possibilities.

Planets seem to work rather well with landscapes, in nature and sometimes urban, but nothing stops you from trying with other types of photographs. I've tried the process with some of my photos of flowers, and I like the results. Especially with flowers that have a single element or group in focus with a fuzzy background, the planets trick seems to do rather well, as the picture above shows.

Monuments seem to work fine, especially those that have enough space around them to get a perfect planet.

When you travel, it's only natural you take pictures of monuments to share with your friends on the way back home. Besides the regular postcard like pictures you may show them, place one or two transformed into planets using this technique. This photo, of one of the most emblematic monuments in the area of Sintra, in Portugal, is an example of the possibilities open to you as a photographer. 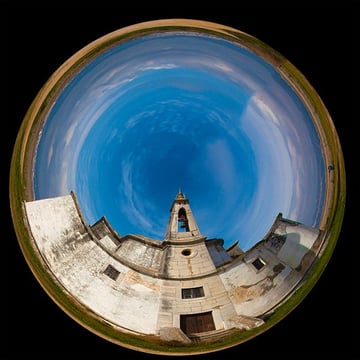 When you only apply part of the technique, the results look different.

The trick to get the planets the way they look in the first images is to Rotate the photo 180 degrees before using the Polar Coordinates panel and clicking on the Rectangle to Polar option. If you want something different, try to apply the effect without rotating the image. It will look differently, with the inside out, as the image above shows.

There is a practical use for this other technique. If you've seen fisheye lens images of town squares, for example, and want to do something that looks like it without having to buy an expensive fisheye lens, just choose a place close to you, photograph it so you cover 360 degrees - the whole circle around you - as you would for a normal panorama, and once home create a big panorama and apply this same technique to it. Magic!

Most probably you'll have some tidying to do in terms of join areas, but it will give you an interesting image to share with your friends.

You can choose any image you deem suitable, crop it different ways and study the effects.

In fact, you do not need to do a full panorama to create some unique images using the techniques above. Although they are not something that you can use everyday and for each photograph you take, there are times you might need a special effect to depict an emotion, pass on a message.

I think the image published just above is a good example. This picture was taken some years ago at a wetlands Nature Reserve and shows a man walking on a wooden boardwalk from a series that crisscross the area. It's a very nice image that shows the ambiance found in the area, a bird sanctuary in the North of Portugal. I always imagined the man as walking into a black hole, vanishing into another dimension. 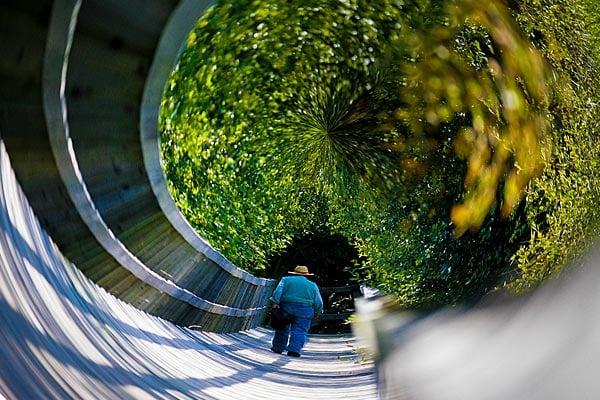 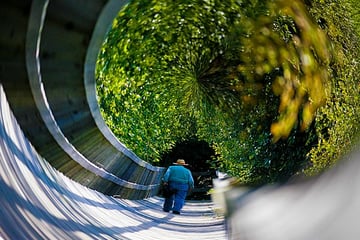 This is a good example of the rather strange look you can get from an image that initially did not show much potential.

While preparing images for this article I picked that image and decided to try to apply the Polar Coordinates effect to it. As you can see, it works. It creates something like a vortex that could be sucking the man into it.

This is a good example that different kinds of images will work with this technique. You just have to try to see the results you get with them. Take some time aside to experiment. Remember that cropping different ways will provide different results. And try, try, try. It is only through experimentation that you'll discover new ways to present your own images. And broaden your own horizons.

Tip: One last and important note: I mention Adobe Photoshop but you can do this technique in different programs, some of them free, as GIMP, that I wrote about here recently. So no excuses. You can create planets for free!

Jose Antunes
Jose Antunes is a freelance writer and photographer based in Portugal. Besides writing about the technical and creative aspects of photography for various publications, he leads workshops and leads photo tours to reveal the hidden perspectives from his country. "Less Gear, More Fun" is an important idea for him.