Using the LCD and Getting Better Border Patrol

A frequent occurrence that I've noticed in beginner and often intermediate photographers' nature and landscape images is the inclusion of stray objects like sticks, grass and tree branches poking in around the borders of the image. That these are missing from experts' images is an indication of two critical aspects of the road to mastering photography: pursue simplicity, and edit ruthlessly.

Of course, you don't want distractions anywhere in the image, but I'm going to pay specific attention to the border area as this is the most frequently neglected area when composing.

This isn't a curious phenomenon. The human brain isn't naturally designed for noticing peripheral irrelevancies. Of course, motionless twigs on the ground or waving tree branches don't naturally catch our attention. This probably wouldn't have been a sensible survival trait!

In photography, however, these areas of complex patterns provide an area of localized contrast which does draw the human eye away from the intended subject when looking at an image.

Since it's the photographer's job to curate the world and present their vision to the audience clearly, these distractions must be eliminated to allow the real subject, that which originally caught the photographer's attention, to shine through.

My goal here is to highlight these flaws and offer some ideas for spotting and eliminating them in your work. I also went out and shot some demonstration photos to illustrate these ideas.

My preferred method of distraction hunting is something I realized a while back and has been improving my work ever since. I use the LCD display. For a long time, it felt like using the LCD display was cheating, that SLRs come with a viewfinder for a good reason and that The Way It's Always Been Done is the "correct" way to do it.

However, tradition isn't a good reason in and of itself to continue to do something, and using the LCD display has multiple benefits. Moreover, when you consider that landscape was traditionally the preserve of large format cameras, these nature photographers weren't, in fact, using a tiny little 1/2" viewfinder but a huge 4x5 or 8x10 inch focusing screen.

They were, effectively, using upside-down monitors. You also don't see Hollywood directors constantly poking their head in front of the cameraman to peer down his viewfinder, but instead reclining in their director's chair with executives and subdirectors behind the bank of monitors in video village.

So if you're one of those people finding themselves laying flat on the ground with your neck twisted to look through a viewfinder because someone told you that was The Correct Way To Do It, feel free to discontinue.

There are of course tangential benefits to using the LCD as well, besides the usually-better comfortability. The first is the obvious size. Seeing something larger is generally better- you wouldn't want your audience to look at 1/2" thumbnails, so why take the photo as such? If you have access to one, a five- or seven-inch external HD video monitor would be even better again.

You can also have your histogram up while shooting so you can see exactly what tonal detail you're getting in real time, particularly useful for any kind of artistic shooting (which nature and landscape on the whole tends to be), and overlay composition guides to help lay out your image more precisely if you want it (that said, ignoring the rule of thirds is of course always a viable option).

The real benefit, however, is the two-dimensional nature of the screen. What do I mean by that? Consider looking through a pair of binoculars at a bird, or through a telescope at a planet. Your brain treats the optical system as an extension of your eyes' optics and continues to filter out those peripheral irrelevancies like tree branches or faint stars.

You can't trust your eyes, and especially not when looking through an optical system. 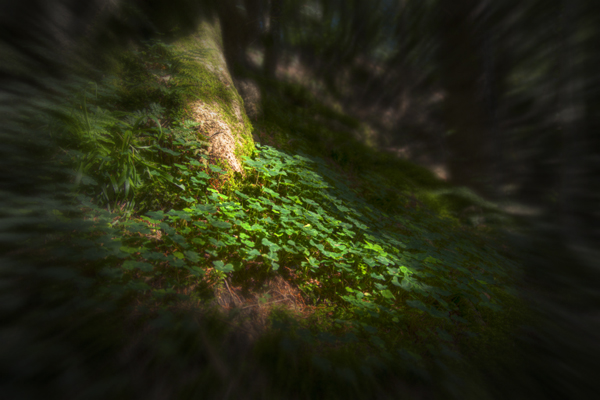 A rough illustration of what your brain sees when looking at a scene. We see the beautiful dappled sunlight and verdant greenery.

Using the LCD monitor, on the other hand, changes your perception of the scene from natural viewing to a two-dimensional graphic representation- in other words, a photograph. Viewing the scene as a flat image removes this in-built "importance" filter from your visual cortex and allows you to see what's really there.

The camera LCD shows you the truth. Suddenly everything's much less photogenic!

It's also essential for crop-viewfinder SLRs; entry-level cameras tend to have around 95% coverage, and mid-range "prosumer" cameras about 98% coverage. So by using the LCD, you're seeing exactly what the camera is seeing, rather than a slight center crop of it.

It's worth noting here that it is possible to train yourself to properly look through the viewfinder, and many photographers have, it does take some time which could otherwise be used to practice more essential techniques. Viewfinder expertise seems to me to be more valuable for street, wedding, environmental portraiture and similar artists.

While it seems odd to be calling digital photography "new" in 2012, it is taking the community as a whole some time to adjust. With a new paradigm comes new workflows and shooting styles, and I think that knowing when to use the LCD is amongst them.

One thing to bear in mind when out shooting with the LCD is that it will run down the battery faster, so be prepared to take spares, or shoot for less time.

So, once you're using the LCD and your eyes start noticing all those little frame-edge distractions, what do you do about them? There are several methods, which may appear obvious, but seem to be underutilized. The first is to move the camera. For beginner and intermediate photographers, it's highly likely that you're not close enough to your subject.

So physically moving the camera forwards, sideways, or a combination of the two to crop out those distractions is usually a good first step. Be aware of exactly what it is that you're focusing on in terms of subject matter, and then crop out the bits of irrelevant grass, flat sky and leaf litter along with any other distractions you're trying to avoid.

Moving in to focus more on the actual subject.

Work that scene, from various positions, angles and heights. This is most easily accomplished by leaving the tripod where it is and roaming handheld until you find the right spot.

Moving even further to the left and experimenting with switching subjects using depth of field.

However, if you're shooting negative space, for example for print use with text or for those minimalist long exposures, or if you already have the perfect composition, you may need to try something else.

Which brings me to my second option: gardening. As a nature and landscape photographer, unless you're shooting wildlife, you're not a photojournalist. Feel free to step in front of the camera and physically remove objects like sticks, rocks or bits of barbed wire from the camera's field of view.

I spotted these branches after taking the first shot during initial review time. I simply clambered around and removed them. 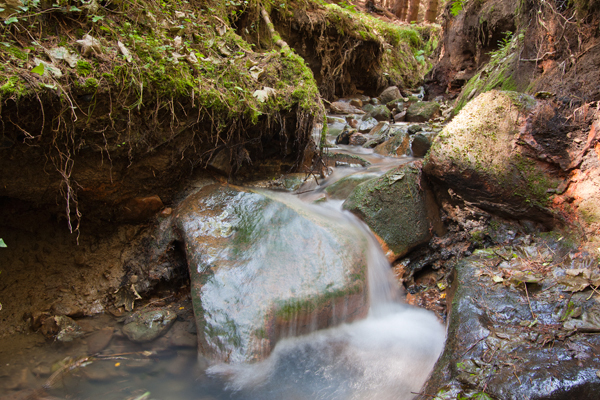 This is one of the easiest methods for small distractions like shiny rocks and twigs in the corners of the frame. If there's a large amount of it though, such as the flotsam around a waterfall, or the objects are fairly immovable like tree branches, half-buried rocks, protected species of plant, this won't work.

Instead try the third technique, depth of field. Use a shallower depth of field than you normally would, say, f/2.8 instead of f/8. Really focus the viewer's attention on your intended subject and throw all of those annoying distractions into beautiful bokeh to frame it, or even into invisibility if they're close enough.

You could even try focus stacking for total control over exactly what is and isn't in focus in post-processing. For shooting smaller subjects like tree trunks and cascades, which are often surrounded by too much detritus to realistically be able to physically remove it all, this is a strong option. 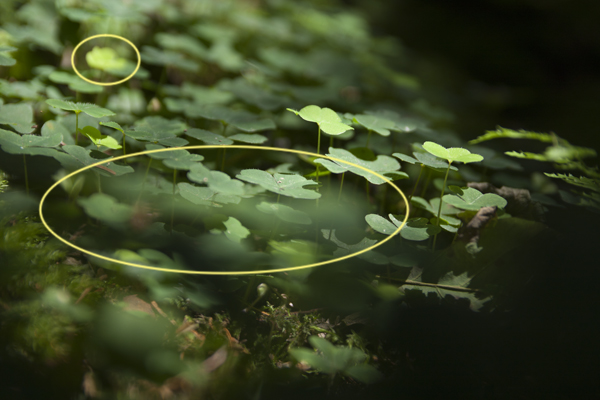 Note the use of depth of field to render close objects almost invisible and reduce the impact of potentially distracting background objects.

Finally, and particularly for certain landscape subjects, for example where you're at a viewpoint and there are overhanging branches which you can't reach blocking out some of the sky, nor can realistically use a shallow DoF on such a large subject, your last option is Photoshop.

This is also the last resort for images where you've returned home, uploaded your haul to the computer and discovered that you've missed a now obvious distraction, perhaps one that was shaded at the time, or even one that you saw but couldn't remove.

You have to be careful with this though, as Clone-Stamping and Content-Aware Fill can be very obvious if done loosely or with certain post-processing workflows. With some practice, though, Photoshop contains some very powerful tools with which to rescue your images. 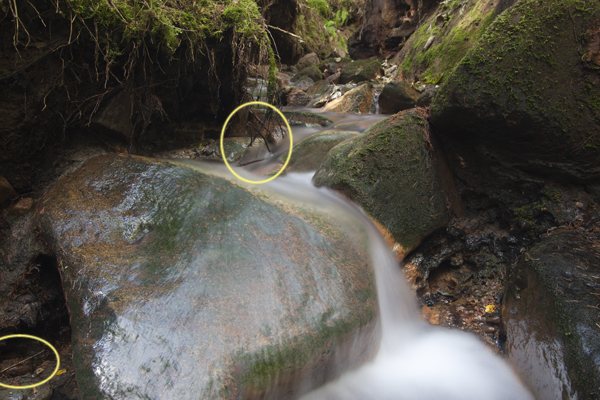 I missed these little twigs in the shadows on the LCD screen. See the finished photo after cloning work and processing at www.500px.com.

This shouldn't be taken as promoting a "fix-it-in-post" mentality, of course.

Straight out of camera. Lots of very obvious sticks and branches that were unreachable without taking a swim. 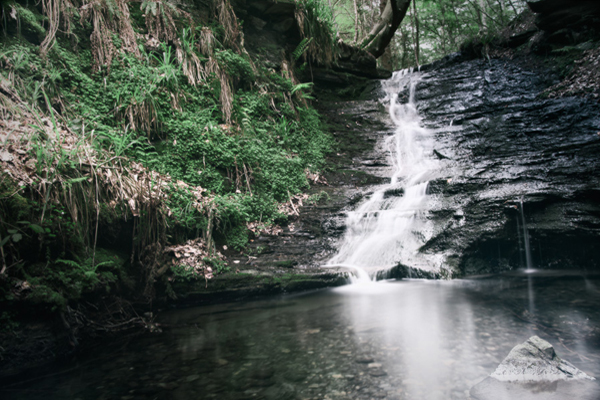 Three hours of clone stamping later, this photo is still simply bad. Some things can't be fixed in post!

If it can be done in-camera, it's usually a good idea to do so, although never underestimate the amount of post-processing many of the most stunning nature images you've ever seen have undergone.

Nor is that necessarily a bad thing. Ansel Adams spent many hundreds of hours in the darkroom working on perfecting his now-legendary photographs, and they even came out of high quality large format view cameras. Which brings us full circle.

The techniques I've looked at in this article theoretically apply to all photography, but I think they're particularly well-suited to nature and landscape because they share inconsistent subject shapes & compositions, sometimes limited access to the area around the subject, and generally similar subject matter photographed in different ways. Happy composing! If you have any questions or comments hit up the comments section below.