Say it loud: How to publicly display messages in a highly visible way, without doing anything illegal? Say it fast: Messages evolve in a perpetual flux. If you take the example of a poster or a title in a newspaper, their context is permanently shifting: who the audience is, where it is read from, what the weather is like, what the buzz of the precise moment is. A static printed message cannot adapt to a changing situation and is bound to obsoleteness. How can we display a physical message while keeping it flexible enough so that it can reflect on its context? Interested, read on!

This Post is Day 6 of our Illustrative Lettering Session. Creative Sessions

This work followed a series on ephemeral letterform: lettering that spelled words becoming less and less relevant as they faded.

The idea this time wasn't anymore to devise ephemeral letterform, but letterform for the ephemeral. This question of embedding the notion of temporariness in the form of the message soon became an exploration of possible typographic forms for impermanent messages.

It had to be flexible enough to keep the message relevant and up to date as its context changed, while having the visual presence of a giant billboard. The idea was to find a way to publicly display messages in a highly visible way, a bit like graffiti that could be updated, while remaining within the frame of legality.

Research: Human as a Medium

This work started with fascinating research on cases of letterform created in the immediacy of a specific space and time, while having to be highly visible. This lead my exploration to the immediate form of message-making of demonstration graphics.

The origins of this project was my encounter with a photograph taken in Nanterre, a campus near Paris, during the May 68 protests. It shows Citroën workers and students wearing huge cardboard boxes over their bodies, displaying one huge capital letter each. As they're holding hands they form the words Nanterre and Citroën, they become the message and have to stay together for it to exist. 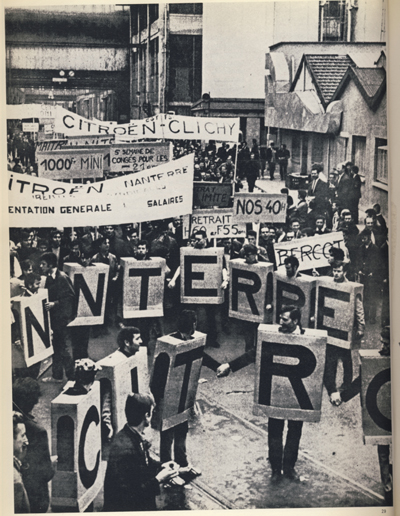 Students in Nanterre, from Massin's Book "Letter and Image"

Individual capital letters painted directly on bodies in order to spell out giant messages as people stand next to each other is also something that has been recently seen in football stadiums. The body is the letter and therefore a fraction of the message (usually the name of a football club) in this almost tribal identification ritual. 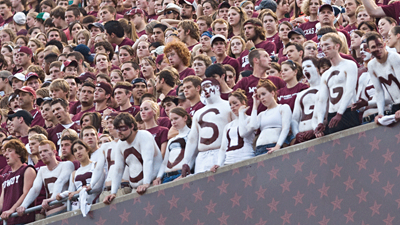 At the beginning of the 20th Century, Arthur Mole (1889–1983), already used humans as graphic elements of messages in his mass photographic spectacles, sometimes using thousands of military troops to form patriotic symbols visible from a bird's eye perspective, such as the Statue of Liberty or a portrait of President Wilson, which he then photographed. Beyond the actual performance, the idea was to parry isolationist tendencies, in particular during World War One, as each human became a dot in a grand drawing glorifying the group. 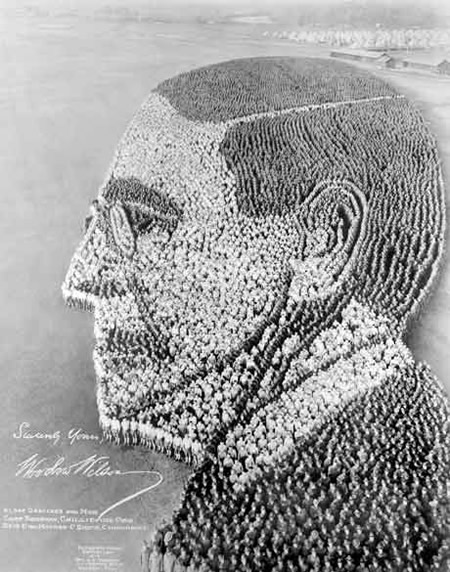 The dissolving of individuality into unity is also the metaphor behind North Korean arranges, mass games featuring 100,000 performers who together form giant Kim Jong Il portraits and patriotic typographic messages covering entire stadiums by holding pieces of colored cards above their heads like human pixels. 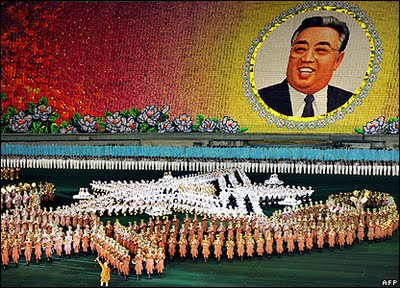 In a sort of word-based arrangement, artist Shelley Jackson "publishes" her 2095-word story one word at a time: volunteers tattoo a word that she assigns to them on their body. While a permanent tattoo is usually a celebration of individuality, these ones only make sense when put next to each other. 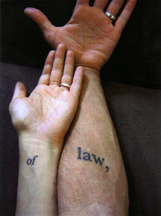 This reminded me of a photograph I had seen years before at Palais de Tokyo in Paris. Equally using tattoo as a denial of individuality, but also humanity, Spanish artist Santiago Sierra paid six unemployed young Cubans thirty dollars to take part in his installation titled "250 cm line tattooed on six paid people." While this installation points out the imperialist power of money, it also uses the indelible mark of tattoo as a metaphor for social determinism in poor countries. 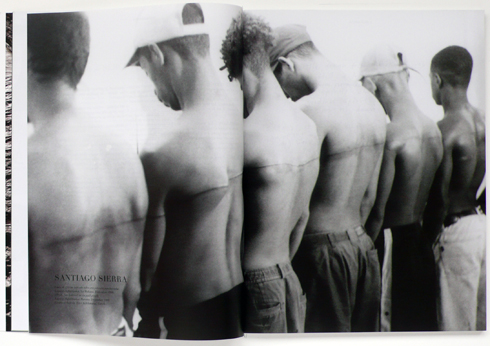 The use of people's body as a display medium in exchange for money has been a fairly common vision in the streets of London for almost two hundred years. Using the human body as a message display facility is a way of evading a tax on advertising by making it mobile, but also by using the humanity of the subject and its "freedom of speech" as a legal argument.

Sketches by George Scharf. Article by u75 editor, Sept 2004 and Sandwich Man

The flexibility of this casual form of communication, combined with the performative potential of togetherness, provided the right components to start thinking of a malleable letterforms expressing the ephemeral message. 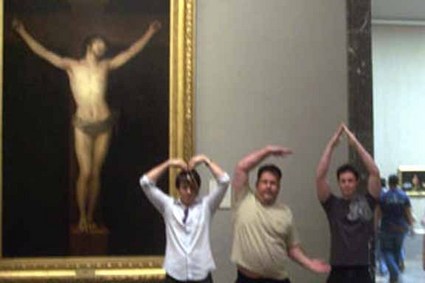 This lead me to experiment with wearable typography. I first worked on a series of three day-glow and black tee shirts, each with a slightly different pattern that displays different highly visible letters when seen from a distance, providing that the wearer places his arms in a specific way. 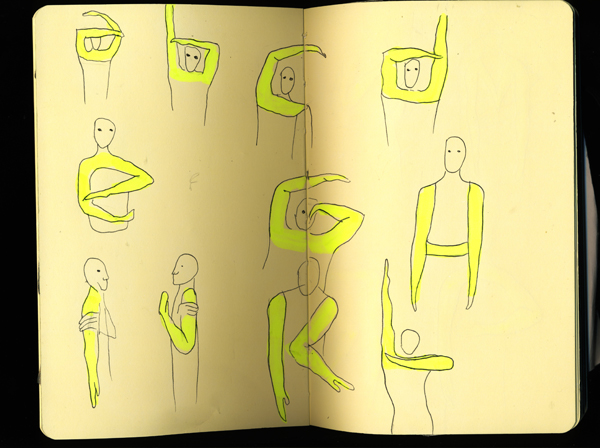 The three patterns were instigated by the three categories of shapes I found in the Latin alphabet (at least when using both capital and non capital letters): letters that could be drawn by shoulders and arms (A, B, C, D, E, G, I, J, K, O, R, S, Z), the ones that needed more lines than the limbs could provide (F, H, M, T), and finally the ones that only needed the shape of the arms (K, N, U, V, W, X, Y). 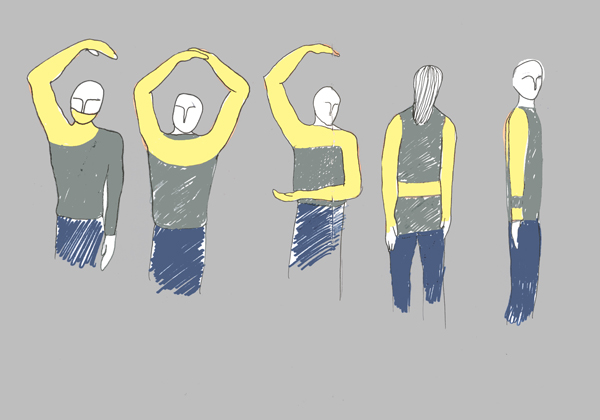 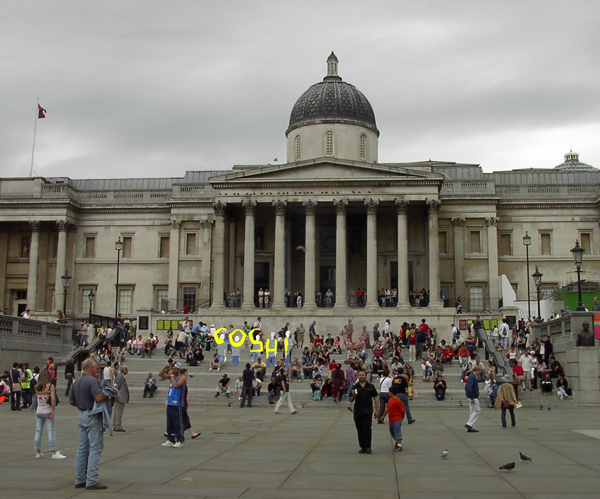 The idea was that when wearing these t-shirts, a group of people could form and display a word or a statement. But what was really special about this mode of communication was that because a single person could mimic a whole set of letters, the message could change, from one movement to another. Off course at this stage this flexibility was slightly jeopardized by the fact that one single t-shirt couldn't be used to make every letter. 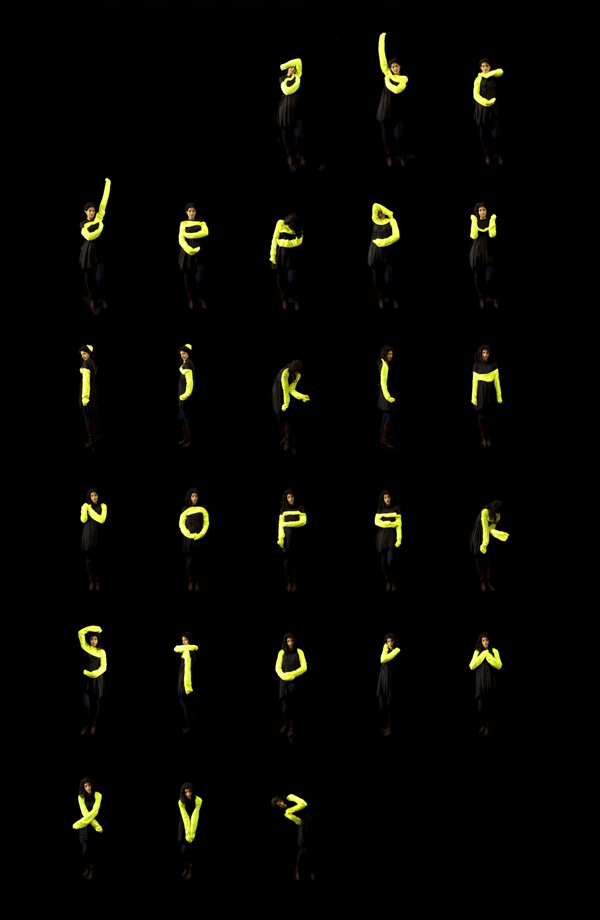 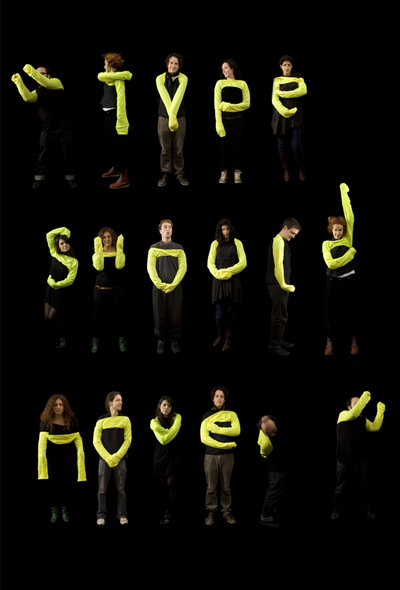 I finally managed to make to gain in flexibility by replacing the t-shirt with a bolero: a pair of day-glow sleeves attached together by a strip of fabric that could be worn across the front or the back of the wearer.

This new pattern allowed the wearer to become any letter or number in a small move, and to comment on situations as they happened. As such, a group of individuals standing in a public place would be able to spell out a series of comments by becoming different letters, one word at the time, a bit like an analogic form of tweet (as in Twitter) that would involve a group of people rather than an expression of individuality.

As the motive for this research was to find ways of displaying highly visible messages in public places, the malleability of this letterform encouraged me to use it as a tool for typographic performances. 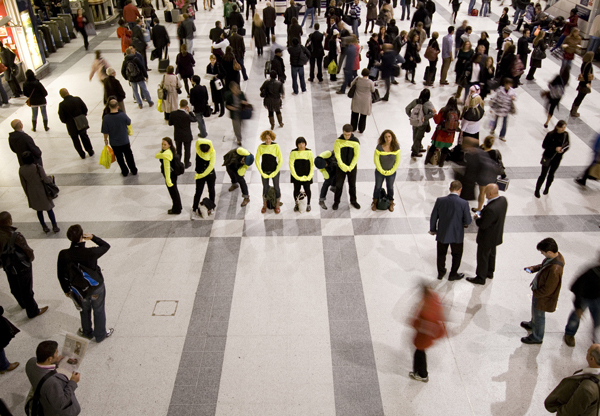 This experiment took place in a busy train station in London during rush hour, in order to reflect the flow characteristic of the place. It involved eight people mimicking a digital clock in real time with their arms and shoulders. Standing in line side by side in the middle of the station, two of them acted as the hours units, two for the minutes, and another two for the seconds. The two other performers were acting as the colons separating each unit of time. A digital re-creation of this project is visible on this address: letterform for the ephemeral. 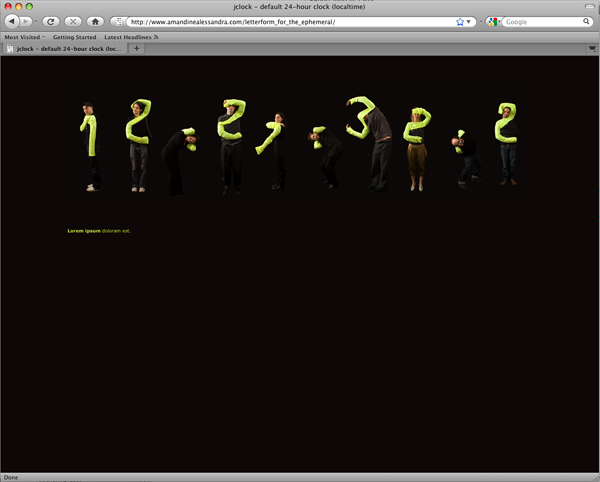 The wearable letterform, with its specific flexibility, allowed the message (in this case time) to change from one second to the other, following more or less accurately the ticking of the station's clock.

The numbers each of the performers enacted were enhanced by the day-glow long-sleeved boleros, which besides making them visible, also echoed the yellow of the train schedule boards above them.

Used in this specific context and by using people as a medium, this temporary letterform confronts the economic value of time (as in time is money) with the individual perception of it.

The final outcome of this experiment is its recording, in the form of a set of photographs fixing the message in the time, space and audience (commuters in a rush) it was addressed to. The letterform was contextual at the actual moment it was mimicked. What is left is a trace of it, as the message displayed (the time the photograph was taken) will not be accurate anymore when looking at the photograph. What was achieved with this latest experiment of wearable type was a letterform to express the here and now. Although I've produced a series of alphabets by having people performing in front of the camera, resulting in quite strong images, I do believe that the wearable letterform finds its raison d'être when used in real time.

Despite not using the most legible letterform, the experiment at Liverpool Street Station did interrupt the crowd flow and raised curiosity, as people tried to understand what we were trying to sell or protest against.

Although this letterform was devised as a rather conceptual research, an attempt to write the unwritable, time flow, I soon became aware that this approach of typography as a malleable and adaptive mean could easily be used as a commercial or critical medium, or, in other words, in advertising and protests, as guerilla interventions.

Besides its eye-catching form, this kind of message display requires an effort to be deciphered. The relative freedom of interpretation left to the audience reinforces the impact of the message: it establishes a dynamic relationship with its receivers by psychologically engaging them, instead of limiting it to one single passive understanding.

Amandine Alessandra
Amandine Alessandra is a photographer and graphic designer based in London. After a Masters in Fine Arts and Aesthetics from the Université de Provence in 2003, she moved to the UK where she runs her own photographic practice since 2007 and graduated with a Masters in Graphic Design from the London College of Communication in 2009. She now works as a freelance graphic designer.